Investors are turning to nature-aligned financial tools—including natural capital accounting, which includes nature in assessing wealth; nature-based credits, which are traded within carbon markets; and nature-oriented climate finance, which can be invested in environmental projects—to protect against biodiversity loss from deforestation and global warming.

“By assessing the services that intact nature provides—ecosystem services—and then putting a value on these, which can come from calculating how much it would cost humans to replicate nature’s services, incorporating nature into the assessment of wealth becomes more tangible,” S&P Global Ratings said in a recent report on natural capital valuation as an incentive to protect nature. “Our research has shown that one potential pathway to strengthen incentives that protect nature is to account for the ecosystem services it provides, and the negative externalities associated with its loss.”

Putting a valuation on nature can help calculate the costs of plastic pollution on fish stocks, the implications of reduced soil fertility on cotton growers, and even how the world’s shrinking bee population harms food crops, according to S&P Global Sustainable1.

Delegates as this year’s COP26 climate conference rallied around calls to action to preserve and harness nature to fight climate change, with nearly $20 billion from public and private funding pledged to stop deforestation and regenerate natural recoveries.

“At this conference, nature has come alongside energy [emissions reduction] as being one of the great solutions to the climate change problem and keeping our planet safe,” Andrew Mitchell, an architect of the Taskforce on Nature-related Financial Disclosures, which is expected to introduce in 2023 a to a taxonomy of definitions, benchmarks, and indicators for companies around the world to measure, report, and address nature-related risks in a standardized fashion, said at a panel discussion held during COP26 and moderated by S&P Global Sustainable1.

Today is Tuesday, November 23, 2021, and here is today’s essential intelligence.

Economic Research: Labor Force Exit Has The U.S. Economy In A Bind 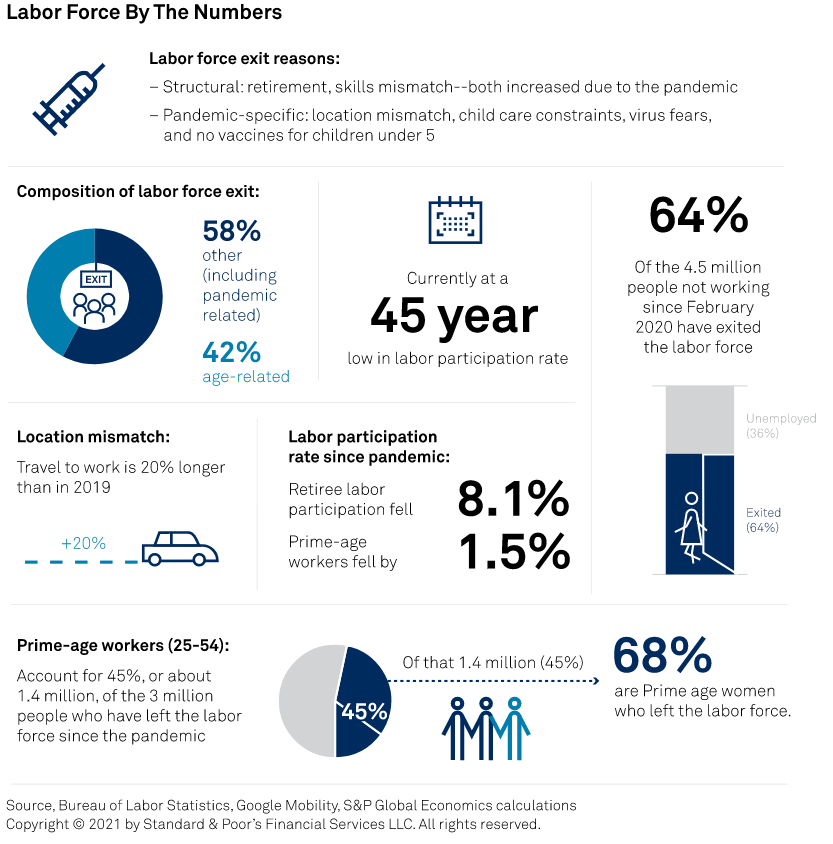 Lost productivity from the drop in labor force participation is limiting U.S. economic growth. While 2021 GDP growth will likely reach a 37-year high, we estimate it lost well over 1 percentage point because of extreme supply bottlenecks. Prime-age workers (ages 25-54) account for 1.4 million, or 45%, of the 3 million people who exited the labor force—and their return is key to stabilizing the job market. 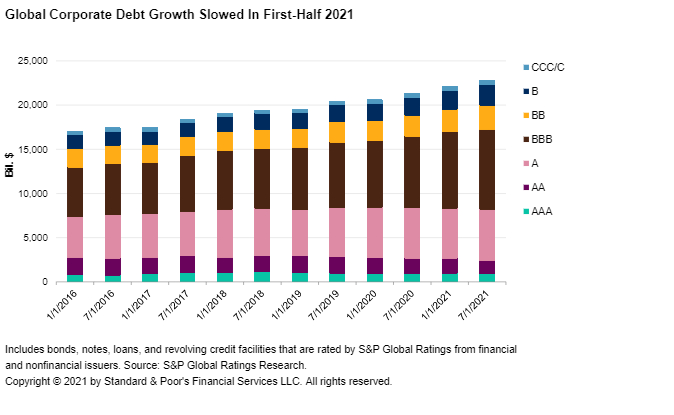 The global financial and nonfinancial corporate credit market's debt growth slowed to 3.1% in the first half of 2021 from 3.8% in the first half of 2020. Speculative-grade debt grew by 7.9% as leveraged finance issuance (speculative-grade bonds and leveraged loans) reached a midyear high. Investment-grade debt growth fell to 1.6% as issuance slowed from 2020's record pace. By rating category, the 'BBB' and 'B' categories had the largest increases in debt, with upgrades from lower rating categories contributing to the rise.

While the COVID-19 pandemic is not yet behind us, vaccination progress in developed economies and strong household disposable incomes have created fertile ground for a strong recovery in retail sales. European consumer product and retail companies have to contend with a plethora of cost headwinds and logistical challenges as they look to reap the benefits of recovery during the forthcoming key festive trading season. 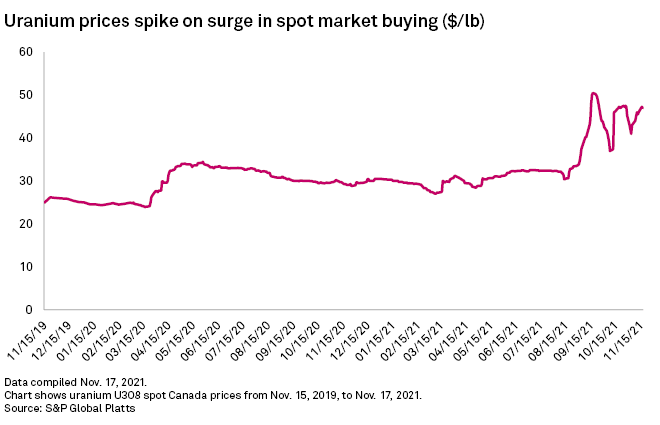 Uranium producers say nuclear utilities have begun exploring long-term contracts now that a Canadian uranium fund has slurped up much of the excess supply in the spot market. Yellowcake prices have been low for over a decade since the Fukushima Daiichi reactor accident in Japan made nuclear power a pariah, a situation that boosted existing nuclear plants which could rely on the low-priced spot market to meet their needs. 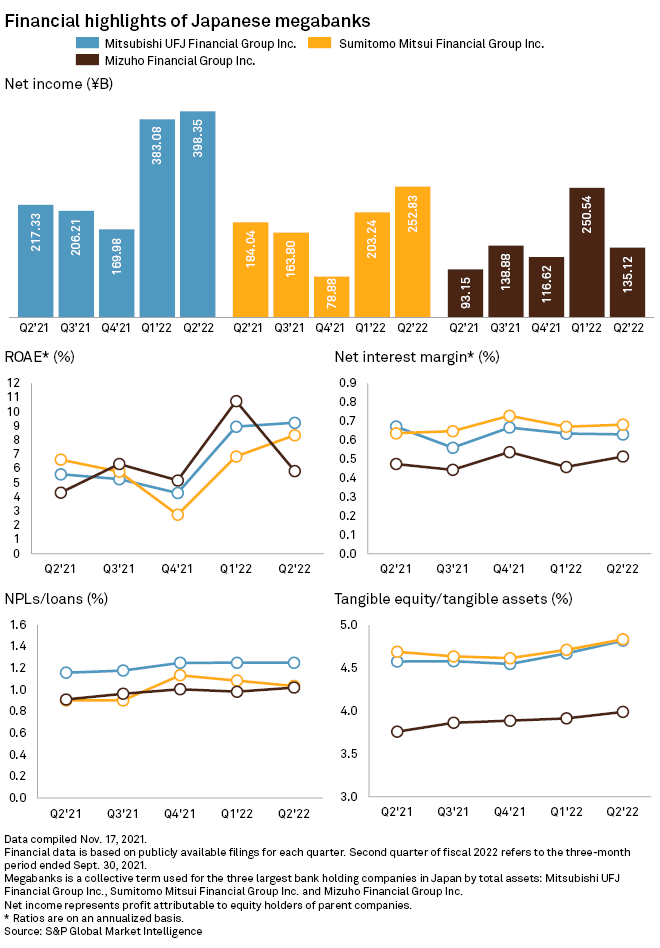 Japanese banks offered no-interest, no-warranty loans to companies struggling with the COVID-19 pandemic for up to five years under a government support plan that started in May 2020. Applications for the subsidy program closed in March 2021, and the interest holiday will end for many companies in the coming months.

Spain's largest banks are beginning to see the gains of recent cost-cutting measures in their home market following a series of restructurings and tussles with unions over the past year. Banco Santander SA achieved an 8.4% year-over-year drop in operating expenses in the third quarter, despite strong income growth over the same period.

UBS Group AG's plan to launch a digital wealth management service for mass affluent clients in the U.S. will present the Swiss bank with a highly promising growth opportunity in a market that is both rapidly expanding and increasingly competitive, analysts said.

Equities in 2021 had a slow start, but as December approaches, it looks to be another stellar year. Through Nov. 18, 2021, the S&P 500 was up 27%. For a strategy that is explicitly designed to mitigate risk, the S&P 500 Low Volatility Index’s year-to-date gain of “only” 17% is well within the range of reasonable expectations.

Media companies in the U.S., Canada, and Bermuda raised less than $1 billion from capital markets in October, marking the sector's lowest monthly total for the year to date. The media sector raised about $445.3 million from debt offerings and $3 million from common equity offerings in October. That compared to aggregate raises of $6.53 billion across offering types in September.

Capital markets activity by publicly traded telecommunications companies in the U.S., Canada, and Bermuda once again fell to a near halt in October, with the sector raising only about $625,000 in total. That compared to about $4.59 billon raised in September. Still, the October figure topped a low point in July, when the sector raised just $100,000.

U.S. lawmakers' focus on recommender algorithms in a recent pair of bills may be ineffective as legislators seek to address broader harms caused by social media platforms. The algorithms have become the center of legislative attention, including a bipartisan, bicameral push to mandate an option for users to opt out of personalized content targeting. 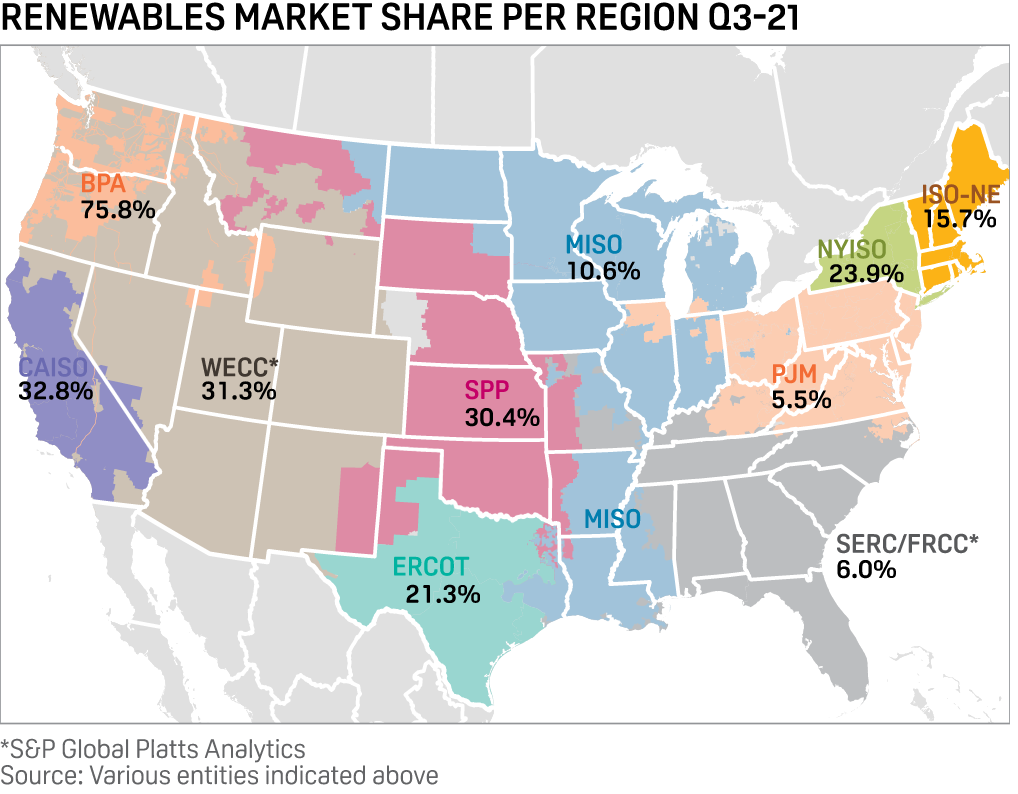 The Electric Reliability Council of Texas remains at the top for total renewable generation output across the U.S. for third quarter 2021 as Texas added the most clean power projects, increasing its installed renewable capacity by 13% since the end of 2020, making large strides in solar and battery storage.

The Biden administration on Nov. 18 moved to reverse a Trump-era Clean Water Act rule that would have eased permitting obstacles for energy infrastructure by stripping the statute's protections from about half the nation's wetlands and nearly one-fifth of its ephemeral streams.

Klima DAO, a cryptocurrency group with a focus on climate activism, is looking to expand the types of voluntary credits it is buying up from the voluntary carbon market and pulling into its treasury, a number of Klima DAO organizers said in an interview with Platts.

“Code red for humanity.” That’s how the imminent effects of climate change were described by the UN. Human-induced global warming stands at 1.1°C above pre-industrial levels and will likely reach more than 2.7°C by 2100. If the world is to achieve the goals of the Paris Agreement and limit global warming to 1.5°C, decarbonization is the answer.

S&P Global Platts has launched new low-carbon hydrogen assessments in the Middle East as the region strives to become a major exporter of the energy carrier. Initial prices showed the Middle East amongst the cheapest producers of renewable hydrogen in the world, second only to Australia in markets assessed by Platts. The assessments track three production pathways in Oman, Saudi Arabia, Qatar, and the UAE. 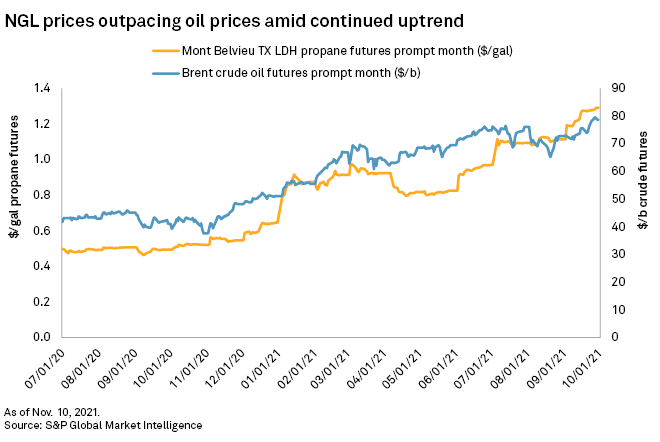 During the third quarter, Mont Belvieu NGL spot prices averaged $1.14 per gallon, a nearly 131% increase from the average in the same period a year earlier. In the last month of the quarter, NGL prices started to outpace the Brent crude oil futures prompt month contract, which averaged $73.21/barrel, representing a 69% boost from the prior year's average.

An uncertain future for fossil fuels and long-standing political turmoil have not deterred Iraq from declaring lofty ambitions to nearly double its crude output capacity to 8 million b/d by 2027. But the cash-strapped country would require unprecedented levels of outside investment at a time when many international oil companies, already unimpressed with the fiscal terms Iraq has offered for years, are seeking to de-risk their portfolios.

Nigeria's oil production outlook is under tremendous pressure, as technical and operational issues along with mounting security concerns are likely to persist over the short term. Many of the country's key oil fields, terminals, and facilities have bene simultaneously experiencing teething problems and a recent resurgence in attacks on Nigeria's oil facilities have exacerbated the situation.