While the show must go on for global media and entertainment sectors, current conditions present long-term challenges to innovation for television and film, gaming, and advertising industries that are faltering without a clear script to stage a comeback to pre-pandemic levels. Consumer behavior perhaps permanently changed by the coronavirus pandemic will likely make this year a tough act to follow, as evidenced especially by moves in the movie market.

Lockdowns in the first half of this year shuttered movie theaters and television and film studios, weighing on companies’ long-term credit quality and pushing some toward bankruptcy. Now, U.S.-based AMC Theaters has raised nearly $900 million in capital through stock sales and debt in efforts of boost its liquidity after ending the third quarter with $11.3 billion in total debt, according to the company’s Nov. 2 earnings call and S&P Global Market Intelligence data. After S&P Global Ratings downgraded U.K.-based Cineword to ‘CCC-’ in September—its third credit rating downgrade since cinema closures started in mid-March—analysts forecast that the firm may need $500 million in additional liquidity to avoid bankruptcy. Overall, total global gross box office receipts declined 78%% year-over-year, to $2.07 billion, as of Nov. 1, according to S&P Global Market Intelligence. Admissions dropped 78%, to 221.2 million, in the same period.

The economic recovery across the U.S. and Europe in the third quarter revived hopes for the future of film in those major markets, but recent climbing coronavirus cases and reinstated containment measures will keep consumers out of indoor environments like cinemas. S&P Global Ratings doesn’t expect global cinema attendance to return to pre-pandemic levels until 2022, and analysts agree that time and a captivating lineup of new movies will be needed to generate buzz around blockbusters, bring moviegoers back to box offices, and move the market toward normalcy.

Following the lackluster performance of acclaimed director Christopher Nolan’s sci-fi flick "Tenet" at the end of the summer, Warner Bros. pushed the release of "Wonder Woman 1984" to Christmas, from October. Comcast Corp.'s Universal Pictures has also postponed the release of at least five blockbusters, including "Black Widow," "No Time to Die," "Candyman," "F9," and "Jurassic World: Dominion."

"If studios see a stronger likelihood that the major moviegoing markets will be increasingly open by the spring/summer period (as a result of a vaccine and new COVID-19 cases being on the decline), then we would expect those studios to make the ... decision to move films scheduled for the remainder of this year and even early next year into more opportunistic slots in 2021-2022," B. Riley Securities analyst Eric Wold told S&P Global Market Intelligence.

While the framework of the in-person moviegoing experience falters, budgets for at-home streaming services have surged and are expected to continue increasing—with Netflix, Amazon Prime, Hulu, and the Walt Disney Co.’s Disney+’s total amortized content spending likely to surpass $23.5 billion this year, according to Kagan, part of S&P Global Market Intelligence.

Today is Tuesday, November 17, 2020, and here is today’s essential intelligence.

COVID-19 Is Only Part Of The Threat Facing U.K. Real Estate Companies 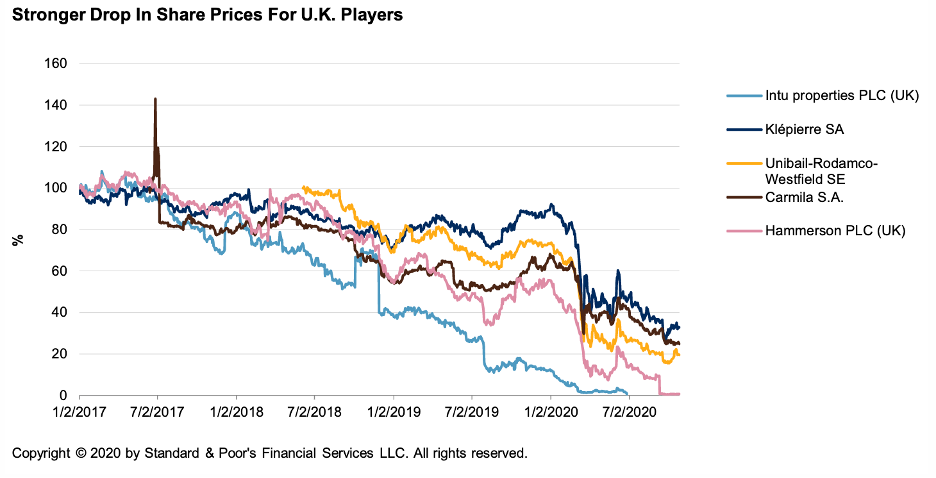 The retail property sector has suffered more in the U.K. than in continental Europe over the past couple of years, this being more acute since the start of the COVID-19 pandemic; differences in market fundamentals, such as a higher ecommerce penetration, more elevated rent cost, and higher density of retail shops, are part of the reason.

S&P Global Ratings complete coverage on European covered bonds with the Danish market, the largest in the world. Covered bonds analyst Casper Andersen returns with host Tom Schopflocher to provide insights into this market, including how its framework differs from others, the impact of the COVID-19 pandemic, and ESG.

Motions of the Market 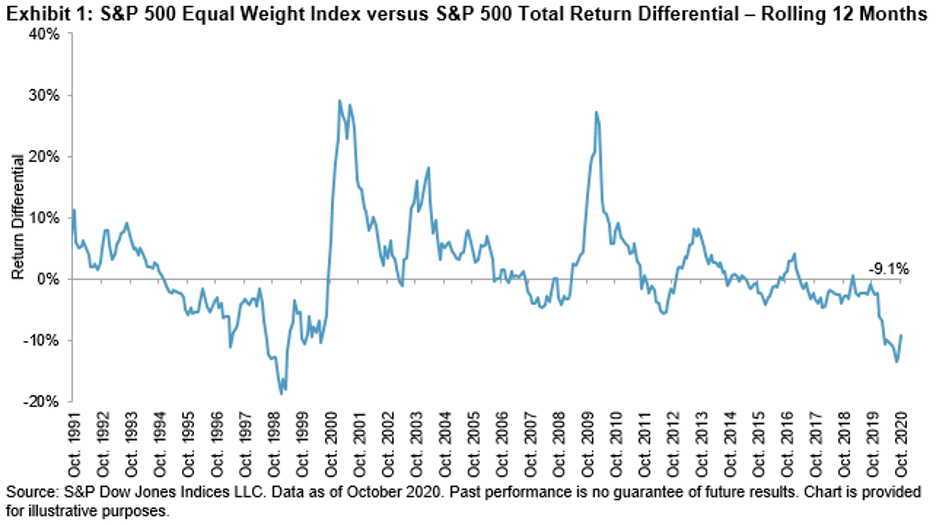 The S&P 500® rose by 10% in the 12 months ending on Oct. 31, 2020, trouncing the S&P 500 Equal Weight Index by 9.1%. While such outperformance is not unprecedented, it does remind us of previous market peaks (especially in December 1999), and raises questions about whether a reversal may be in the cards.

Discussions regarding a K-shaped recovery from COVID-19 highlight disparities across different commodity sectors. India seems to be experiencing its own version of this, with some areas improving faster and stronger than others.

BBVA's U.S. Sale to Give It Capital Firepower for M&A, Buybacks 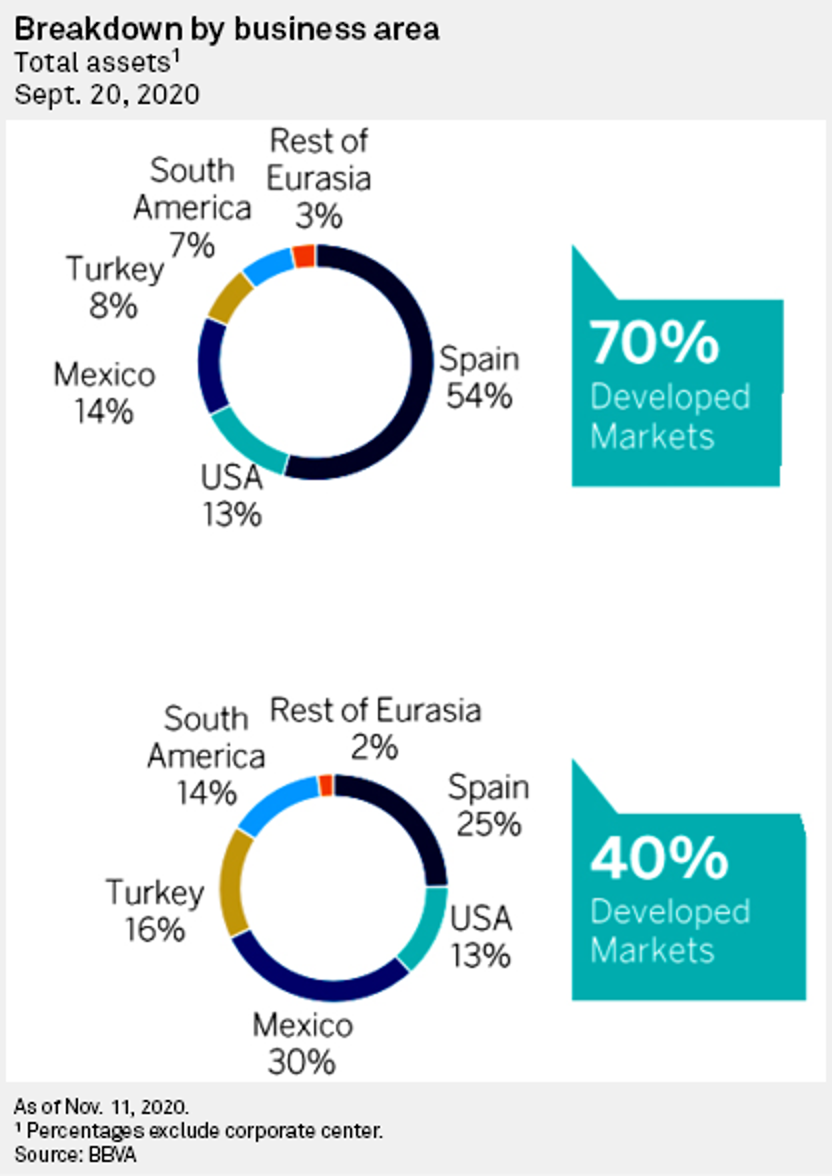 Banco Bilbao Vizcaya Argentaria SA's sale of its U.S. business will provide the lender with a huge capital injection that opens up the possibility of share buybacks or acquisitions on the Spanish market, while also providing it with the financial strength to offset the economic impact of the coronavirus.

Australia's proposal to ease its responsible lending rules for banks as it struggles with its first recession in three decades is unlikely to boost credit growth in the economy as both borrowers and lenders remain cautious, analysts say. 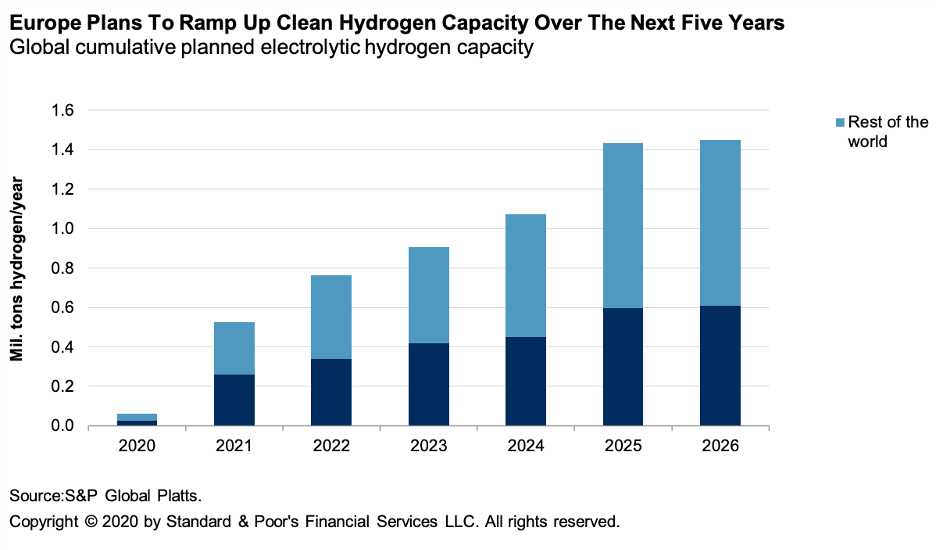 Germany's decarbonization goals are a formidable challenge for the utilities sector given that coal and lignite still represented close to 30% of the country's power generation as of 2019 and 20% as of June 30, 2020. Yet, the government has now clarified its coal and lignite orderly exit process, with action starting this year. Adding to complexities for utilities, the decarbonization plan is running in parallel with Germany's nuclear exit program, to be completed by 2023, leading to an unprecedented shift in energy sources.

The COVID-19 pandemic has devastated oil refiner earnings and forced the industry to find creative ways to either defend shareholder returns or resume them in the near future.

Key oil ministers from OPEC and its allies will hold critical talks Nov. 17 on 2021 production quotas, steered towards an extension of current output cuts through March or June by an uncertain near-term market outlook.

The US Bureau of Land Management is soliciting nominations from industry for tracts in a federal lease sale now planned in the Arctic National Wildlife Refuge, the agency announced Nov. 16.

The US oil and gas sector is facing several huge transitions all at once: the immediate crisis brought on by the pandemic and a longer-term energy transition away from fossil fuels.