As cryptocurrency adoption spreads, potential risks and regulations are rising.

Amid crypto’s advance from Wall Street to Main Street, investors and regulators are considering decentralized assets as the digitalization of financial markets continues. For blockchain, which is the backbone of cryptocurrencies, a tension is developing between its feasibility as a market solution and the introduction of administrative, operational, legal, and regulatory credit risks, according to S&P Global Ratings. Meanwhile, regulators around the world are warning that crypto’s volatility poses risks to broader financial stability.

"The main reason consumers own cryptocurrency is to make money," Charlotte Principato, a financial services analyst at the decision intelligence company Morning Consult, told S&P Global Market Intelligence. "As long as they are able to do that, even if there is more regulation, they will continue to purchase it and the sector will grow."

Crypto’s global market capitalization swelled by 3.5 times last year, to $2.6 trillion, and has settled around $2 trillion this year, according to S&P Global Market Intelligence. And as momentum around the digital asset class continues to grow, market participants and observers are seeking opportunities to get in on the action while mitigating risk and establish better oversight over the developing landscape.

Even as authorities in the U.S. and E.U. explore the potential for digital currencies, the mainstreaming of crypto assets like stablecoins—created to ensure a stable value between the digital and fiat worlds—may require some form of regulation around its operations, according to S&P Global Ratings.

"Stablecoins are growing quickly, so they could become financial stability risks," Timothy Massad, a former chairman of the Commodity Futures Trading Commission, told S&P Global Market Intelligence, explaining that the obscurity of the crypto sector’s inner workings and its rapid rise creates the foundation for appropriate accelerated oversight even though crypto sector doesn’t currently present significant risks to the stability of the broader market.

These risks exist within and outside of crypto’s broader environmental and social considerations. Criticized for the substantial amount of energy and emissions that cryptocurrency mining accounts for, the industry and its regulators are pushing for greener means of authenticating transactions.

At the same time, market participants say that the industry’s desire for diverse participants typically left behind in legacy investment opportunities to join the crypto community necessitates regulation atypical of other aspects of the financial system.

"Despite having the qualifications, a lot of the legacy banking system is really built on who knows you," Sam Sealey, founder of the cryptocurrency education group The Stellar Global Community and head of the digital asset practice at The Digital Economist think tank in Washington, told S&P Global Market Intelligence. "You now have an unbiased access to a system of finance, which is revolutionary, something that we haven't seen, honestly, in the history of mankind."

Today is Monday, May 9, 2022, and here is today’s essential intelligence. 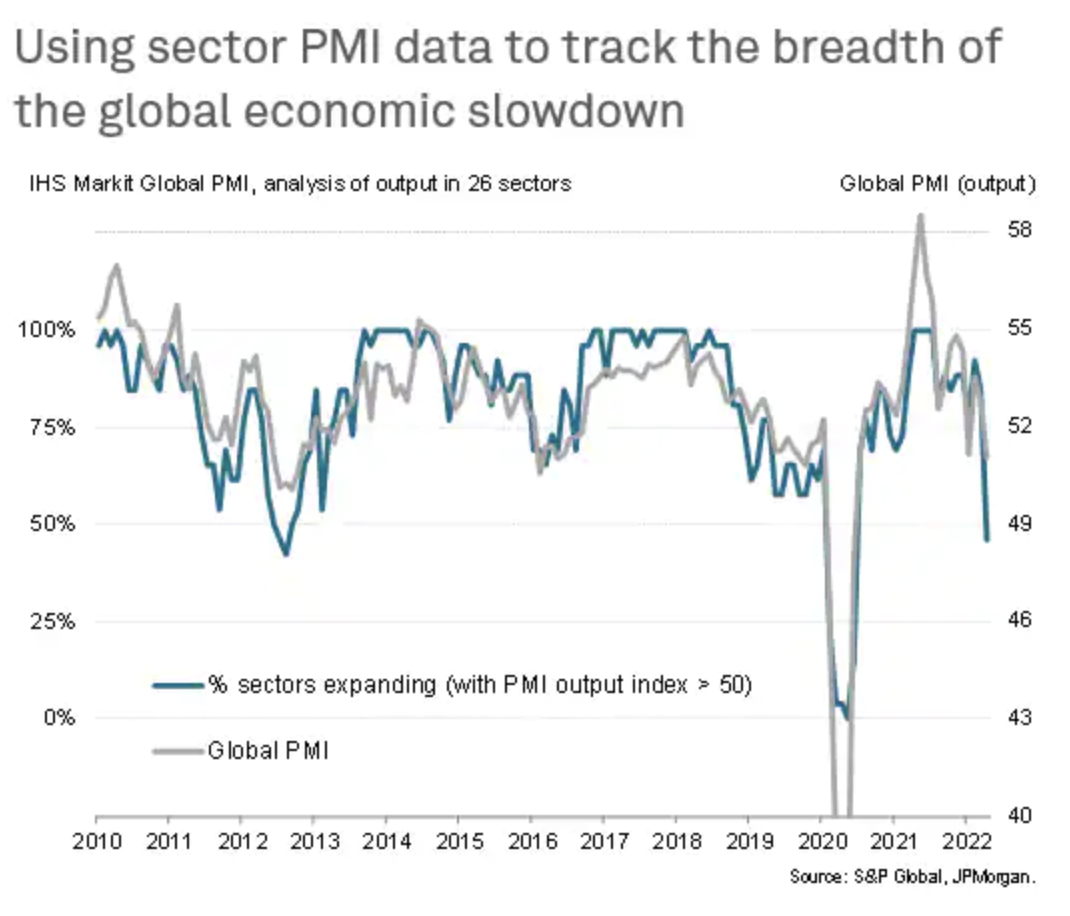 Detail sector PMI data compiled by S&P Global, derived from information provided by panels of over 30,000 companies in 45 countries, revealed a broadening of the global economic slowdown in April. With the exception of the downturn seen in early 2020 during the initial phase of the pandemic, April saw more sectors reporting falling output than at any time since 2012. 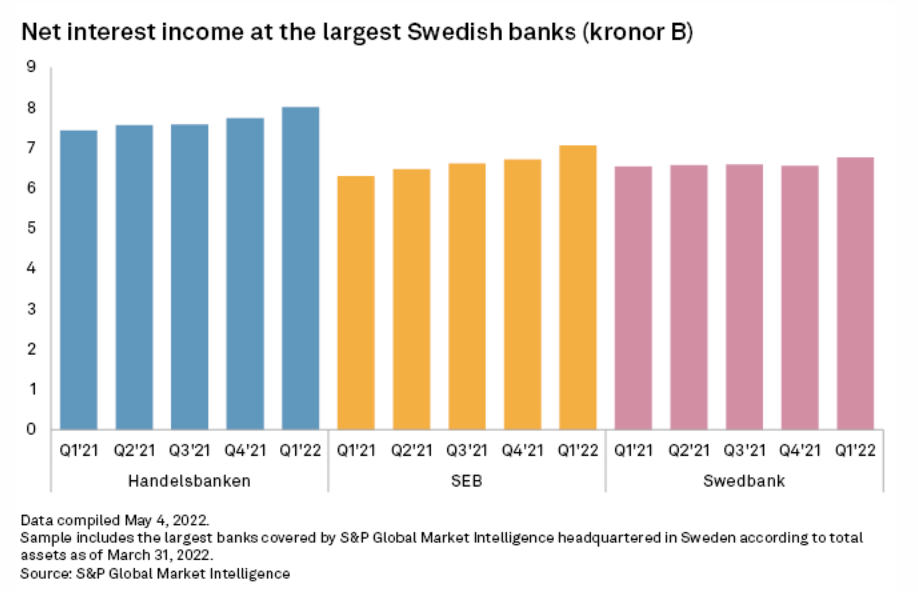 Sweden's largest lenders recorded higher net interest income in the first quarter of 2022 and can look forward to a further uplift after the country's central bank brought interest rates back into positive territory for the first time since 2014. The Riksbank, responding to high inflation, raised its key interest rate to 0.25% from 0% on April 28 and plans to hike it again a further two or three times this year, forecasting that it will reach 1.8% in three years. 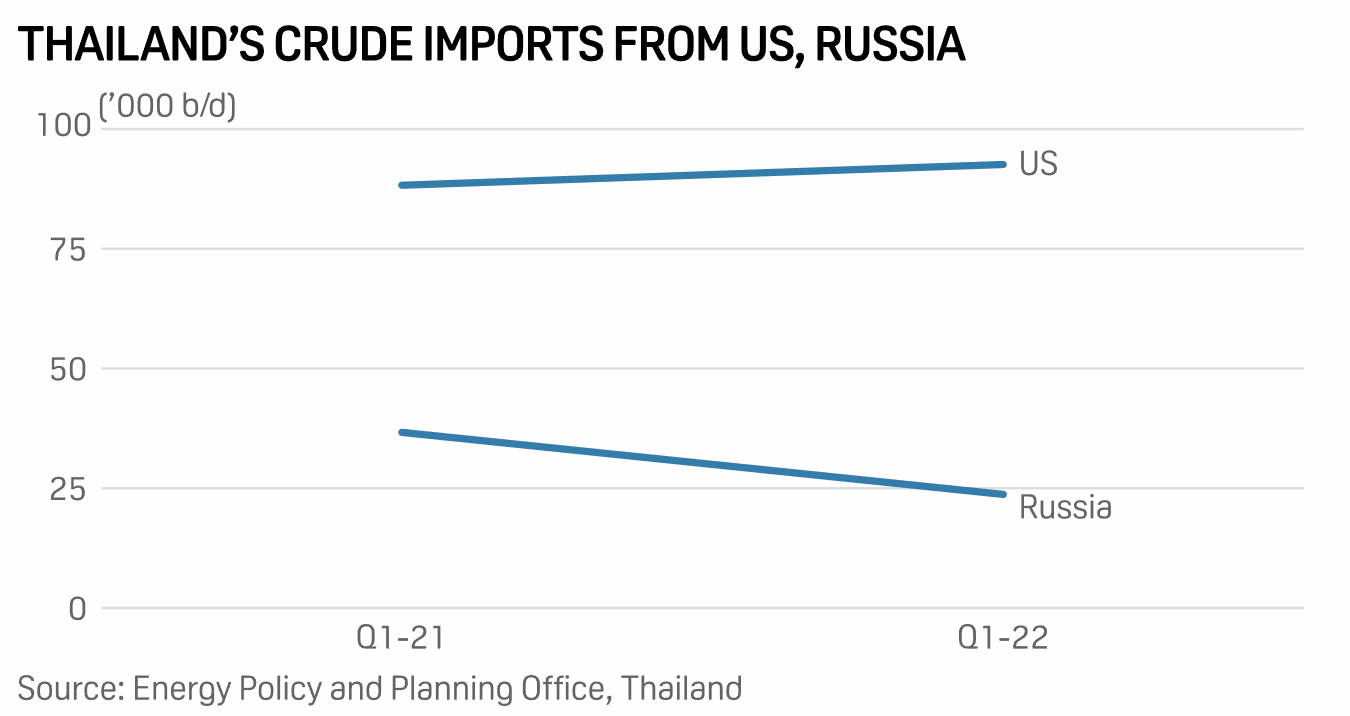 Asia's appetite for U.S. crude posted positive growth in the first quarter despite lucrative Russian offers, but North American supplies could face more competition in the second quarter as refiners will continue picking up barrels from the non-OPEC supplier until they remain outside sanctions and are available at substantial discounts. But analysts added even if Russian crude inflows to Asia pick up substantially in Q2, it won't alter trade flows dramatically since the share of Russian crude in some Asian countries is traditionally small. For example, it was less than 1% in India's total crude imports in 2021. 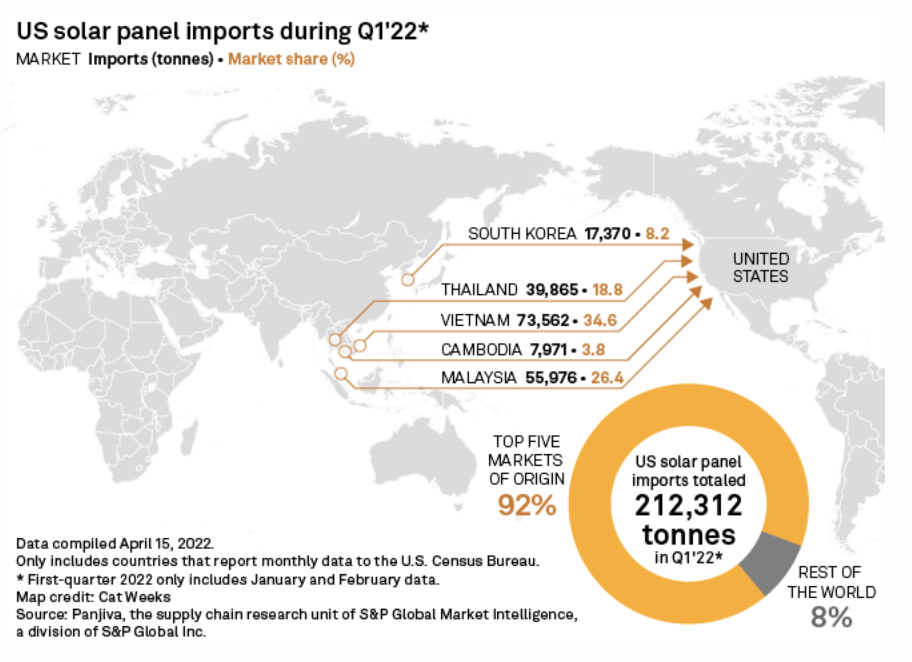 Electric utilities remain committed to solar projects impacted by a U.S. Commerce Department probe despite an industry lobbying group's warning that the investigation threatens nearly half of the solar capacity the U.S. was expected to install in 2022 and 2023. During first-quarter earnings calls, utility management teams have emphasized their flexibility to push projects further out, secure power purchase agreement terms, and pivot capital to wind investment, if necessary.

Infographic: How Much Russian Oil Does Europe Import? 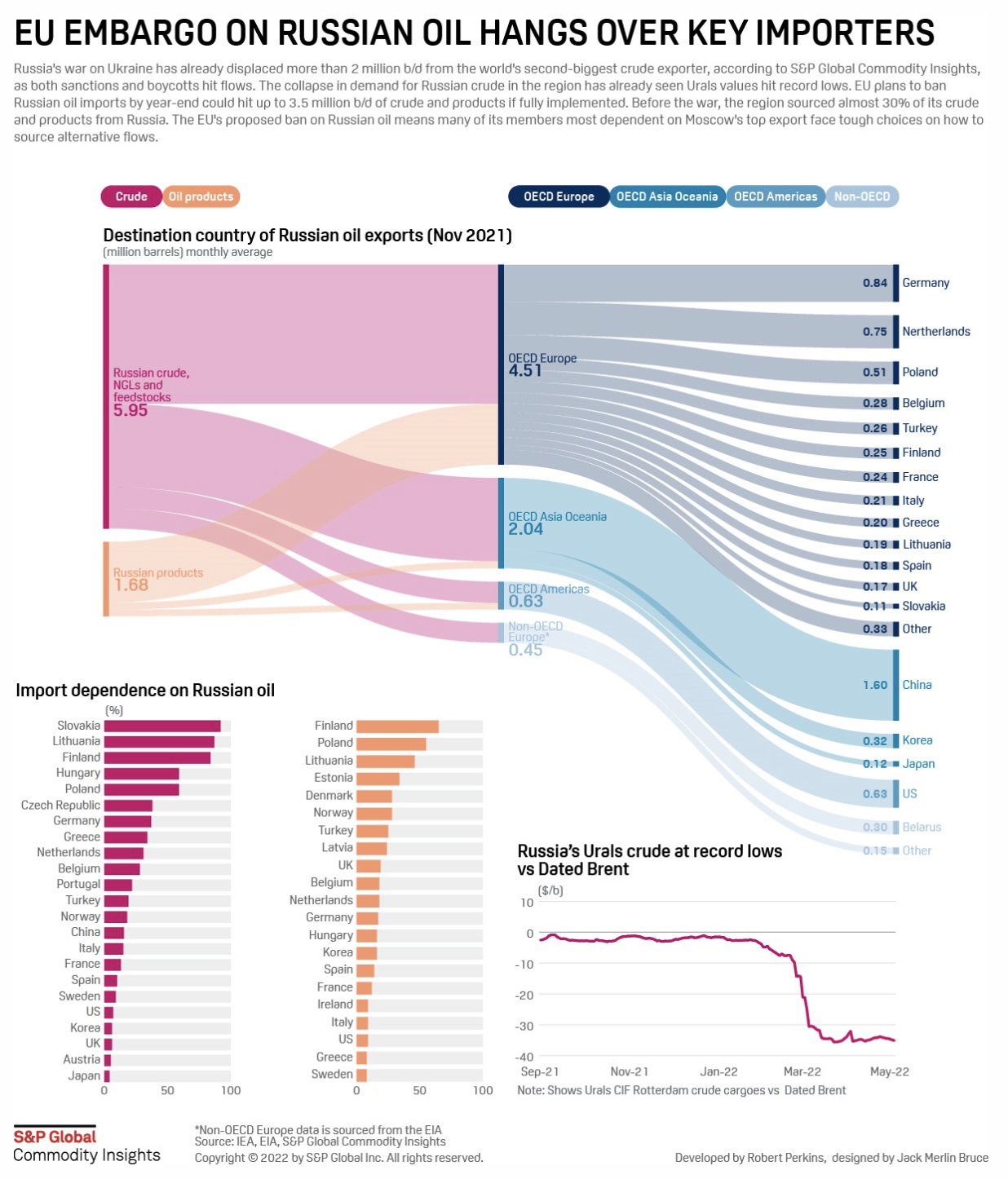 Russia's war on Ukraine has already displaced more than 2 million b/d from the world's second-biggest crude exporter, according to S&P Global Commodity Insights, as both sanctions and boycotts hit flows. The collapse in demand for Russian crude in the region has already seen Urals values hit record lows. EU plans to ban Russian oil imports by year-end could hit up to 3.5 million b/d of crude and products if fully implemented. 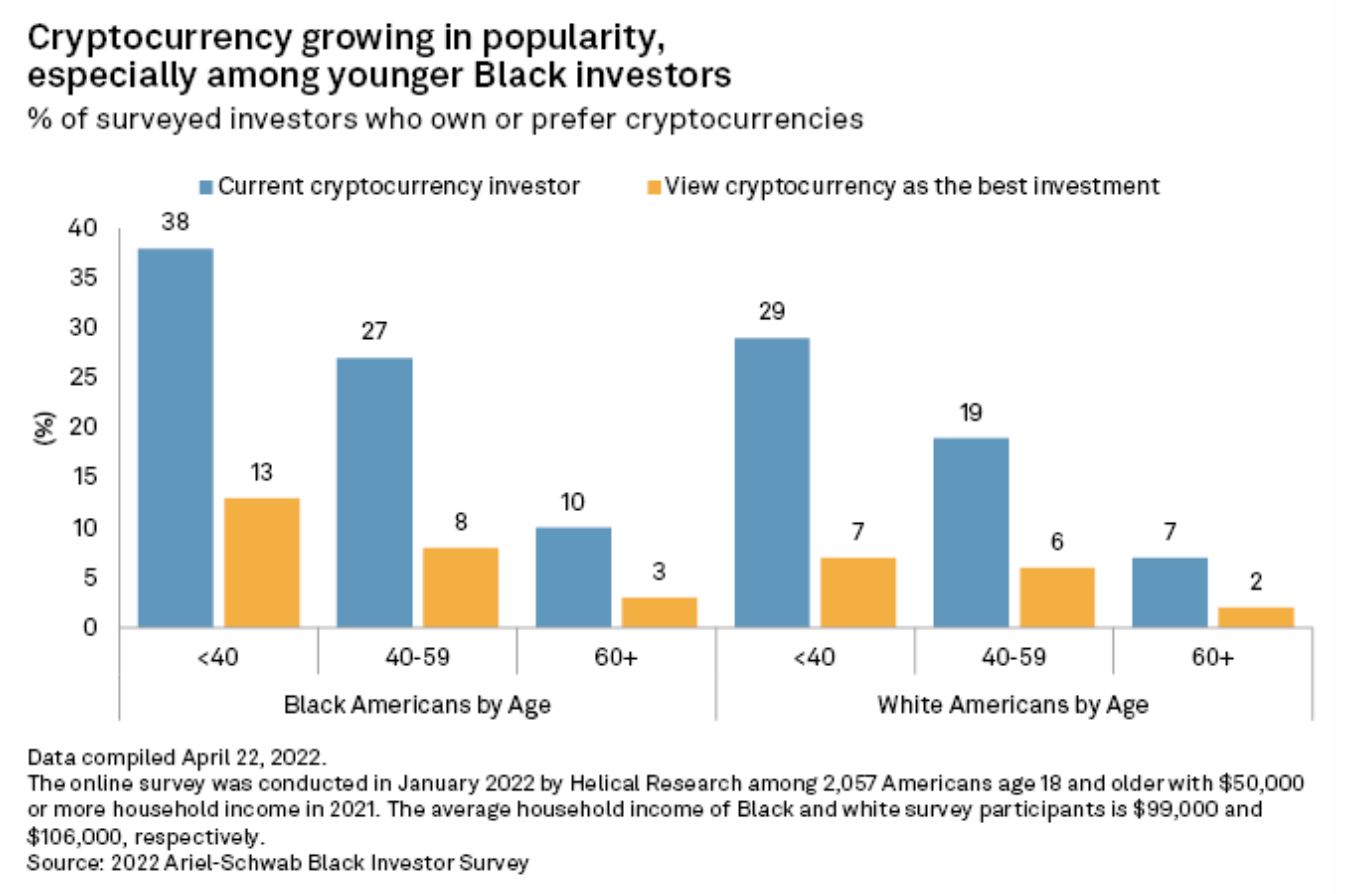 Sam Sealey had 17 years of experience in real estate, money in the bank and credit scores in the 800s. Still, he said getting bank loans is difficult because he is Black. And so, when he wanted to grow his wealth, he turned to blockchain and cryptocurrencies like bitcoin instead of traditional financial institutions. Blockchain—a shared, immutable ledger that helps record transactions and track assets—removes the possibility for conscious or unconscious biases to block access to capital or wealth accumulation.