In reaction to the effects of the war in Ukraine on energy and commodities markets, the divide between Asia-Pacific economies and corporate issuers who will and won’t be able to successfully weather the turbulence is widening.

In their latest forecast, S&P Global Ratings Economics lowered growth outlooks for Asia-Pacific economies but projected that the region overall will enjoy solid growth this year of 5.1% because its recovery is at an earlier stage than Western regions.’ Nonetheless, inflation is likely to exceed targets in more economies—and is pushing Asia-Pacific central banks in New Zealand, Singapore, South Korea, Taiwan, and other countries onto a pathway of monetary policy normalization.

“Higher energy prices will weigh on current-account balances and real purchasing power in the many net-energy-importing economies. This will be particularly true for South Korea, Taiwan, and Thailand, where net energy imports are the largest, compared with the size of the economy. High prices will be a plus for the region's net energy exporters—Indonesia, Malaysia, and, especially, Australia,” S&P Global Ratings Asia-Pacific Chief Economist Louis Kuijs and Economist Vishrut Rana said in research published this week. “An escalating Russia-Ukraine conflict could rapidly increase energy prices, hitting demand and creating turmoil in financial markets. Asia-Pacific central banks may be forced to tighten monetary policy more aggressively.”

Asia-Pacific central banks have generally not been called to raise interest rates. If central banks do take stronger action to normalize monetary policy, the region's post-COVID recovery could be halted. Globally, rising interest rates could prompt investors to pull their capital from emerging markets across Asia, which would hurt energy-importing economies that have slim current account surpluses or deficits, according to S&P Global Ratings.

“Surging energy and commodities costs, a consequence of the Russia-Ukraine conflict, are among the reasons dividing the region into winners and losers. These include net energy importers and exporters, havens and non-havens, and producers and consumers. The already uneven recovery track will lead to greater divergence among rated issuers,” S&P Global Ratings Asia-Pacific Regional Credit Conditions Chair Eunice Tan and Senior Credit Research Fellow Terry Chan said in research published yesterday. “Central banks (e.g., the Fed and Bank of England) are embarking on monetary tightening; China and Japan are exceptions. Emerging markets may see capital flight—hitting currencies and hiking funding costs. Meanwhile, cautionary investor sentiment could limit refinancing options for some speculative-grade issuers.”

By continuing to implement its low-tolerance COVID strategy, lowering interest rates rather than raising them, and soft recovery amid a real estate downturn, China appears to be the outlier across Asia-Pacific. Despite its ambitious economic target of achieving growth of around 5.5% this year, S&P Global Ratings Economics believes expansion of 4.9% is more likely. The continuing property problems in Asia-Pacific’s largest economy signal persistent liquidity strains for property developers amid weak unit sales and declining prices, according to S&P Global Ratings.

Today is Thursday, March 31, 2022, and here is today’s essential intelligence. 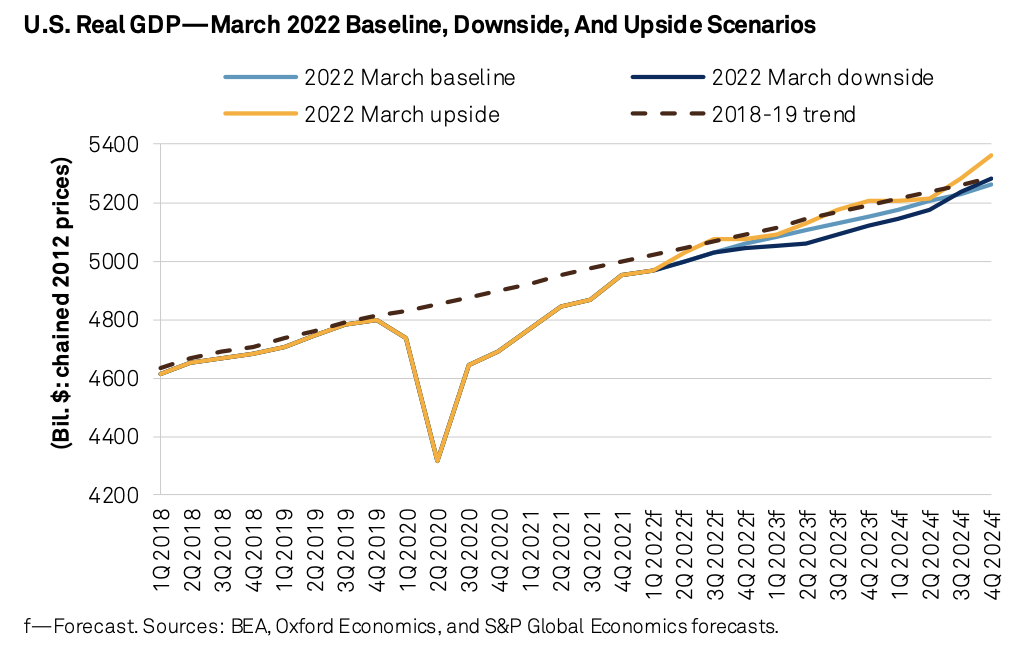 With heightened geopolitical tensions adding to already-heavy price pressures and supply constraints, and the Federal Reserve beginning to battle nagging inflation with what promises to be an aggressive cycle of monetary tightening, borrowers in North America may soon see the run of remarkably favorable financing conditions come to an end. While North America is comparatively insulated from the direct effects of the Russia-Ukraine conflict, the U.S. and Canadian economies—and the borrowers that operate in them—aren’t immune to the fallout. 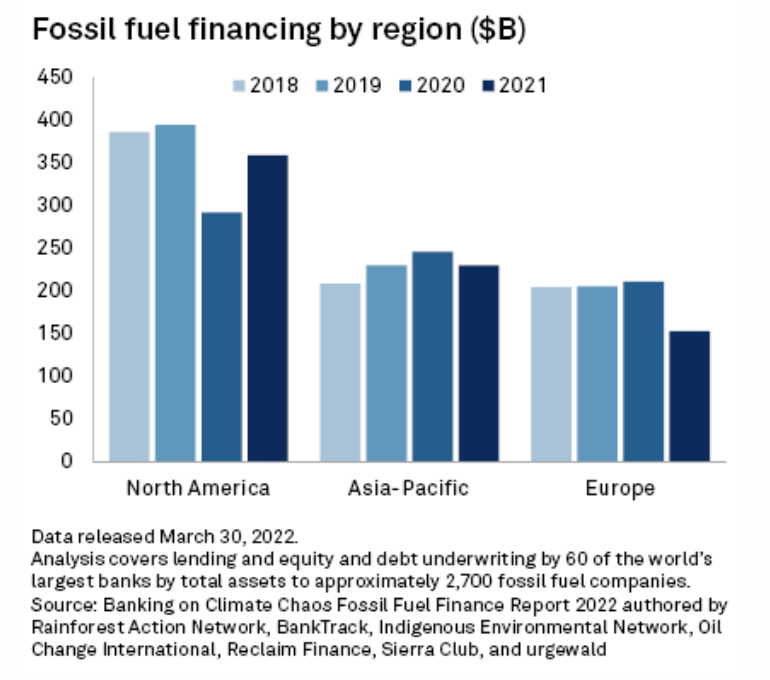 Large European banks cut financing to fossil fuel companies by 27.6% in 2021 amid mounting shareholder pressure and the publication of new funding policies, while U.S. and Canadian peers increased their financing, according to new research. Pressure from investors is having a "clear impact" on some banks' climate strategies, with U.K. lenders such as Barclays PLC and HSBC Holdings PLC releasing new policies after facing shareholder resolutions, said Maaike Beenes, campaign lead at BankTrack, one of the environmental advocacy organizations behind the new Banking on Climate Chaos report. 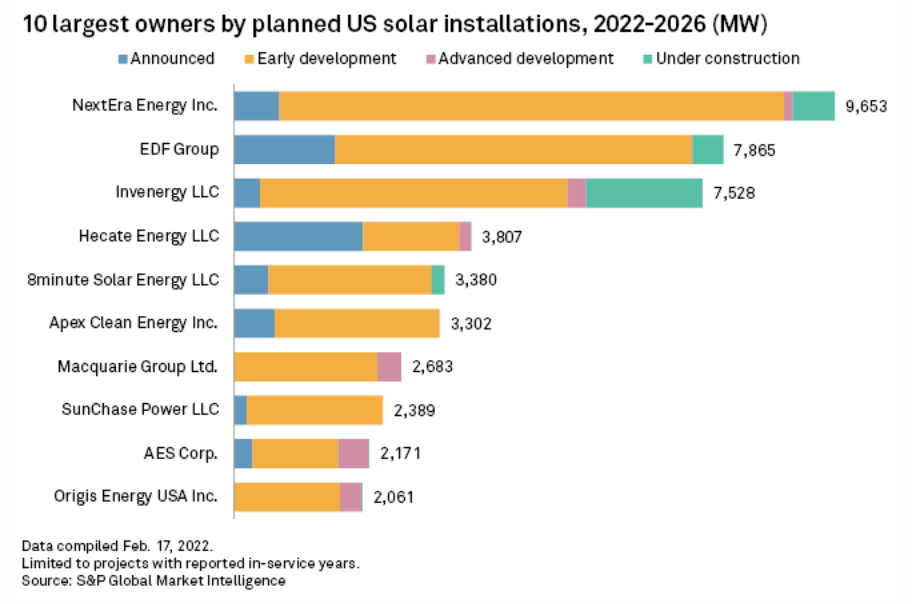 A U.S. Commerce Department investigation into whether solar manufacturers used factories in Southeast Asia to circumvent American tariffs on imports from China could exert a heavy drag on the project plans of some utility-scale developers and installers. Crystalline silicon solar cells and modules assembled in Cambodia, Malaysia, Thailand, and Vietnam could be subject to the same tariffs that the agency has imposed on Chinese-made components to enforce antidumping and countervailing duties. Those four countries accounted for more than 85% of U.S. solar panel imports during the fourth quarter of 2021. 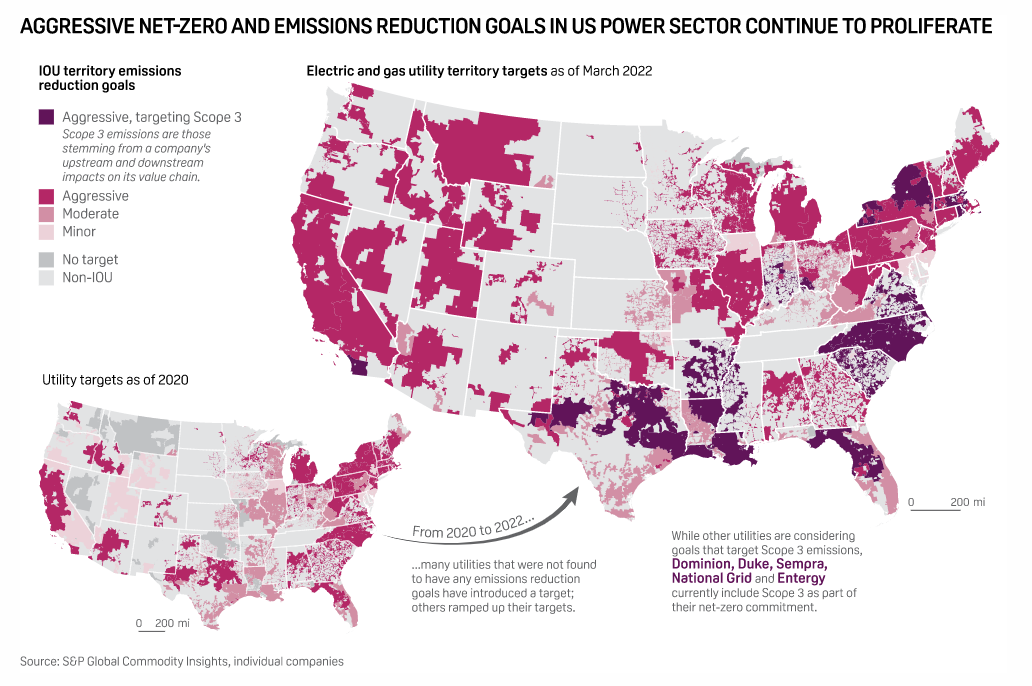 With a supermajority of major U.S. electric companies now working towards net-zero goals, a new set of first movers are evolving their climate ambitions to include Scope 3—the largest portion of the power sector's total carbon emissions. Scope 3 emissions, or those generated by a company's indirect impacts across its value chain, accounted for 75% of the power sector's total emissions in 2019, according to S&P Global data. Most utilities' net-zero goals don't currently include Scope 3, which is hardest category of emissions to quantify and reduce, and instead pertain exclusively to Scope 1 and 2, or the emissions directly associated with a company's operations and energy use. But that appears to be changing. 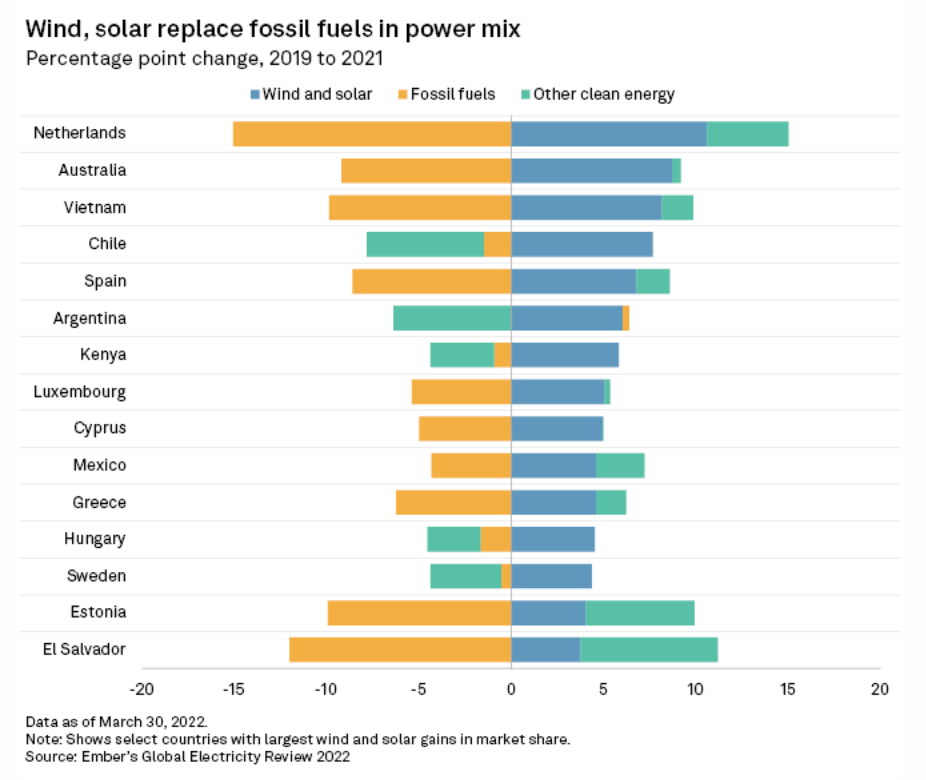 Wind and solar power made up a record 10% of global electricity production in 2021, but power-sector emissions still rose by 7%—the biggest rise since 2010—as demand rebounded and coal generation increased, energy and climate think tank Ember said in its Global Electricity Review 2022. Fifty countries globally now derive one-tenth or more of their power from wind and solar, Ember said in the March 30 report. China, Japan, Vietnam, and Argentina hit the milestone for the first time in 2021, while global leader Denmark now generates more than half of its power from renewables.

The rapid pace of digitization and interconnectivity have led to an increase in the frequency and severity of cyberattacks, resulting in greater monetary losses for corporate entities. Total negative rating actions where a cyberattack was a contributing factor, while modest, more than doubled for 2020 and 2021 relative to the preceding two-year period—a trend we expect will continue. Cyber preparedness is an increasingly important emerging risk factor in our analysis and companies that do not incorporate cyber risk mitigation strategies into their corporate governance and risk management frameworks could face ratings pressure, even before an attack.