A Month of Conflict, An Evolving World

In the month since Russia’s invasion of Ukraine began on Feb. 24, civilians have experienced devastating attacks, uncertainty has roiled global markets, and the international order has dramatically changed —raising questions about how the continuing geopolitical shock will pressure economic, market, and credit conditions ahead.

The Russia-Ukraine conflict and resulting sanctions have spurred a recalibration of global trade relationships; sparked an exodus of businesses from Russia and a massive curtailment of the country’s financial sector; skyrocketed already-elevated energy prices to unprecedented highs; put pressure on supplies of key commodities like palladium, nickel, and fertilizer; and heightened the risk of food insecurity in emerging markets and other regions, among other outcomes. Governments and corporations’ actions in this evolving period of volatility moving forward may contribute to a redefined world.

“Russia's military conflict with Ukraine has shocked markets and sent oil and gas, agricultural products, metals, and other commodities prices soaring—just as the global economy was already facing historic inflation and rising interest rates as major central banks signal aggressive monetary policy normalization,” S&P Global Ratings said in its outlook of the themes that will shape the year ahead. “These challenges compound fundamental issues that could radically transform credit markets. As the global economy continues to recover from the pandemic under newly uncertain and volatile conditions, it will be reshaped by changed consumer behavior, reshuffled global supply chains and capital flows, resurfacing credit headwinds, renewed urgency to combat climate change, and new and existing geopolitical shocks, as well as accelerated digitalization of markets and the broader economy.”

The situation has the potential to affect the global economy in the long-term. Prolonged pressures on the supply chain could curb global growth.

Volatility in metals markets has continued apace over the month, with prices reaching a frenzy on March 8 and raising investors’ concerns about the availability of supplies. Tin prices soared to record highs on that day before tumbling again. Nickel prices reached a notable $101,365 per metric ton in early trading on March 8, and have been volatile since. Frenzied nickel trading on the London Metals Exchange prompted a two-week suspension starting on that same day that tin reached its price record of $48,865 per ton.

Overall, S&P Global Ratings anticipates that countries with high dependence on oil and gas from Russia have the greatest risk of economic decline from rising energy prices. U.S. sanctions on Russian crude have limited direct implications for the U.S. economy, but any possible bans on energy imports from Russia to the E.U. would be complicated for European economies. The Russia-Ukraine conflict is forcing the U.S. and European economies to prioritize their energy security over their energy transitions and seek carbon-intensive sources that were falling out of favor due to climate considerations, according to S&P Global Commodity Insights. European crude refiners are aiming to maximize their runs and are looking for alternative supplies. But as the EU turns to the U.S. for substantial supplies of liquified natural gas as a result of its plans to cut its Russian gas dependencies by two-thirds this year, both allies said today that they will plan to execute the partnership with a commitment to reduce overall gas demand by utilizing clean energy, according to S&P Global Market Intelligence.

Corporations and governments are preparing for a ratcheting up of cyberattacks. In particular, industry and cybersecurity experts told S&P Global Commodity Insights that the U.S. oil, gas, and power sectors are preparing to act if Russia attempts to attack their networks—and have implemented plans to prevent and/or mitigate potential disruptions to their operations.

“The inflationary effects of the conflict's pressures on energy and food prices are intensifying already-acute pressures from supply-chain interruptions. Accounting for the median change in prices outside of COVID-19-caused disruptions in the past two years, we have seen overall combined prices of technology, precious metals and minerals, forest products, energy, and agriculture already advance by 86% from the end of 2019 to date,” S&P Global Ratings said in a recent report. “Now, the Russia-Ukraine conflict is creating the sharpest price shock of the decade. It's clear that the increase in energy costs is structural and will affect companies' operations and results in the next few years.”

Today is Friday, March 25, 2022, and here is today’s essential intelligence. 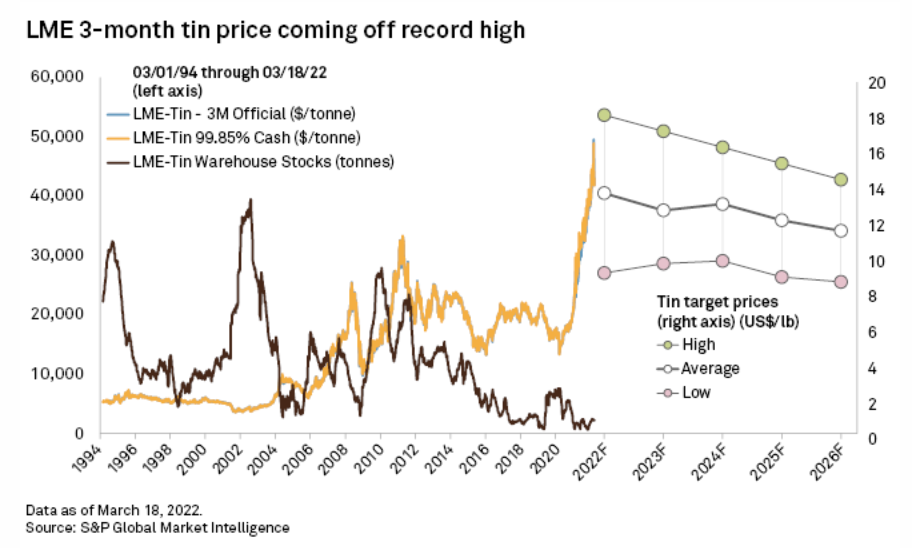 Tin prices hit record highs March 8 but quickly gave up their gains, mirroring the volatility in the broader commodities market amid Russia's invasion of Ukraine. Tin, an essential metal for soldering electronics that has applications in solar panels and batteries, had a meteoric rise over the past year that echoed that of other metals key to global decarbonization efforts. Prices rose even further after Russia invaded its neighbor on Feb. 24, triggering fears of global supply problems. The three-month price closed at $49,500 per tonne on the London Metal Exchange and the cash price for 99.85% tin closed at $48,865/t on March 8—a record for both, according to S&P Global Market Intelligence data. 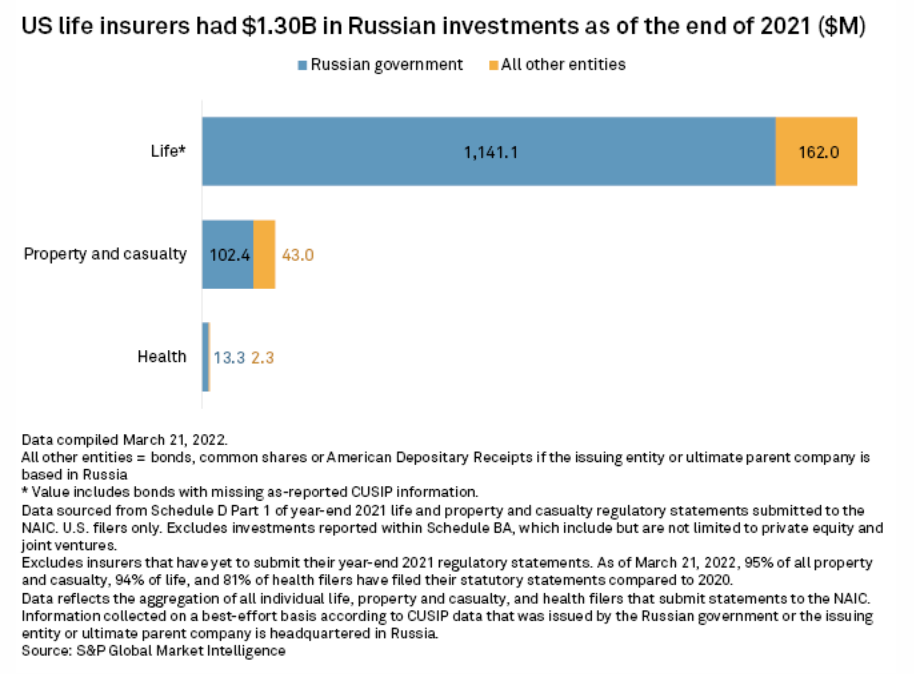 U.S.-based insurance companies do not have much exposure to Russian securities, according to an S&P Global Market Intelligence analysis of regulatory statements. A review of U.S. insurers' portfolios shows that they held $1.46 billion in Russian bonds or stocks as of year-end 2021, with 85.8% of that total invested in Russian sovereign debt. Following Russia's invasion of Ukraine, S&P Global Ratings has placed the country's sovereign debt into junk status. As issuers' credit ratings fall, the probability of bondholders not receiving interest or principal payments rises. Insurance companies must account for that risk by carrying additional surplus or capital for those investments. While some U.S. insurers may feel the effect of additional charges and potential investment losses, the overall impact looks to be minimal.

As global oil markets continue to react in real time to the ongoing conflict in Europe, downstream sectors and interconnected industries are also beginning to see marked impacts on trade flows, fundamentals, and most notably spot pricing. Long a key refining and import/export hub for the Western Hemisphere, the U.S. Gulf Coast has seen swift reactions from logistics operations and energy majors as the region deals with a lack of Russian imports amid sanctions. Americas shipping manager Barbara Troner and dirty products manager Patrick Burns speak with clean tanker editor Eugenia Romero and U.S. bunkers editor Phillipe Craig to break down how spot pricing for freight rates and marine fuels has reacted, and what those key segments can expect going forward. 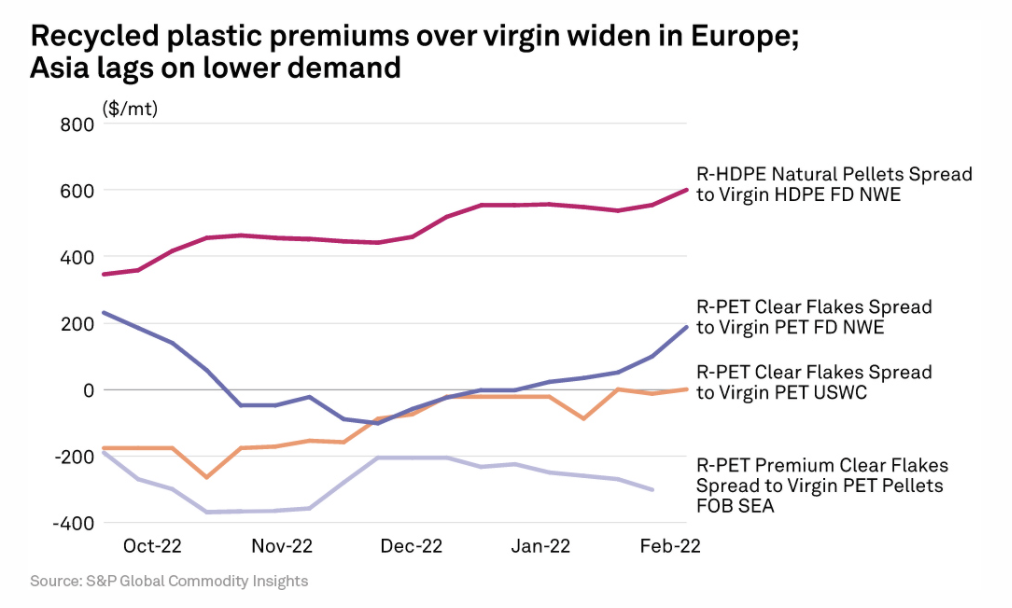 Recycled plastics have been around for years as a premium option for those aiming to reduce their environmental footprint while continuing to use these materials which, due to their remarkable versatility, have become ever more entrenched in daily modern life. But despite steady growth, this segment has always been a relatively niche part of the ever-expanding petrochemicals market. Now, however, the growing urgency of the global drive toward net-zero and the energy transition is encouraging companies to innovate even more in the quest to provide premium sustainable petrochemicals. This in turn is driving rapid growth in demand for the feedstocks to produce them and resulting in an ever-tighter market. 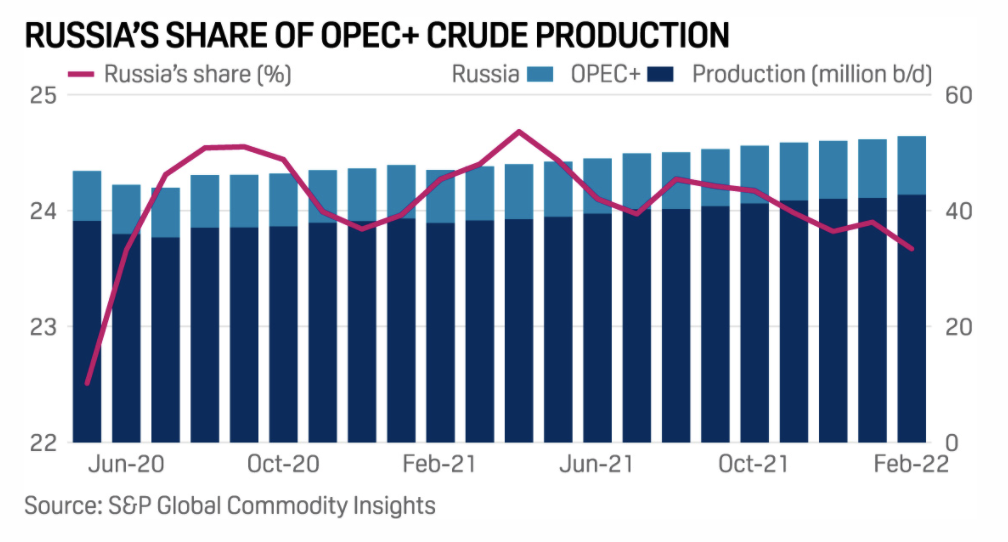 OPEC has told the EU that global energy markets would be destabilized if European countries follow through with a threat to ban imports of Russian oil, sources in the producer group said, with traders warning of massive price spikes beyond the surge already seen. OPEC, which formed an alliance with Russia in late 2016 to manage the oil market, has been intensely lobbied by western countries and major consumers to increase crude output to offset the impact of sanctions imposed for the Ukraine war. 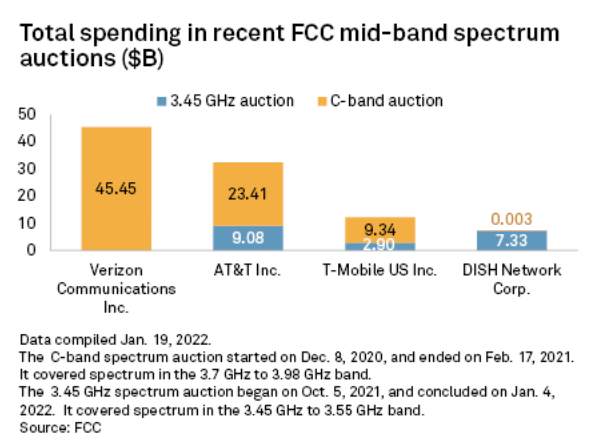 Verizon Communications Inc. has struck deals with satellite operators to clear additional C-band spectrum ahead of schedule. The deal comes after Verizon spent $45.45 billion in 2021 to secure licenses in the Federal Communications Commission's auction of spectrum in the 3.7 GHz-3.98 GHz band, a portion of the C-band that is considered essential for 5G networks due to its balance of speed and range. Though Verizon acquired a total 160 MHz of frequencies in the auction, only 60 MHz came from the A-block that satellite companies such as Eutelsat Communications SA, Intelsat SA, SES SA, Star One, and Telesat agreed to clear by December 2021 in exchange for "accelerated relocation payments" totaling $9.7 billion.