Committing to keeping its benchmark interest rate near zero and extending its emergency lending facilities to the end of this year, the Federal Reserve indicated that the U.S. economic recovery from the coronavirus pandemic will depend on continued stimulus from the federal government.

“The fiscal policy actions that have been taken thus far have made a critical difference to families, businesses, and communities across the country. Even so, the current economic downturn is the most severe in our lifetimes,” Fed Chairman Jerome Powell said at a July 29 press conference following the central bank’s policy meeting. “It will take a while to get back to the levels of economic activity and employment that prevailed at the beginning of the year. And it will take continued support from both monetary and fiscal policy to achieve that.”

Central bank governors said in a statement following the meeting that “the path of the economy will depend significantly on the course of the virus” and “the ongoing public health crisis will weigh heavily on economic activity, employment, and inflation in the near term, and poses considerable risks to the economic outlook over the medium term.”

Mr. Powell said the central bank hadn’t doled out as much lending as it anticipated because markets rebounded shortly after the announcement of the Fed’s emergency lending facilities, but that it is critical that the programs remain functional until the pandemic and its economic implications are long over. The state of Illinois is still the only customer of the central bank’s new $500 billion Municipal Liquidity Facility, created just two months ago, according to S&P Global Market Intelligence.

“What we’re trying to do is create an environment in the financial markets and the economy where those people have the best chance they can have to go back to work to their old job or to a new job. That’s really what we’re doing. Everything we do is directed at that,” Mr. Powell said.

Still, Mr. Powell acknowledged that as coronavirus cases have been increasing across the country since June, recent labor market indicators and consumer surveys point to a slowing recovery after activity began to rebound slightly after lockdown orders were lifted.

The central bank leader’s comments came just days before the $600-per-week unemployment benefit instated by the federal government is set to expire on July 31. Bipartisan officials in Congress are currently deadlocked in discussions over whether to renew the program—and if so, for how much.

Other federal programs to relieve joblessness appear to have not accomplished their objectives. S&P Global Ratings Chief U.S. Economist Beth Ann Bovino estimated that around 5 million loans approved through the Paycheck Protection Program have saved approximately 13.6 million jobs—far fewer than the 51 million reported by the Small Business Administration.

Today is Thursday, July 30, 2020, and here is today’s essential intelligence. 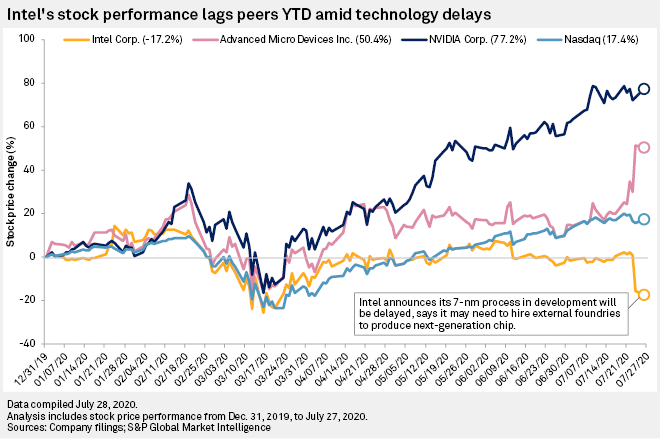 Intel Corp.'s management shake-up, triggered by the impending departure of its chief engineering officer, is clearly aimed at reassuring Wall Street that the company has addressed its technology development struggles — but big questions remain, analysts said. Chief Engineering Officer Venkata "Murthy" Renduchintala will leave the company Aug. 3. He is the first executive to take a fall for the delays and manufacturing problems that may drive Intel Corp. to hire an outside foundry to help get its next-generation 7-nanometer chip products onto the market. S&P Global Intelligence said the executive reshuffling around Renduchintala's departure would "accelerate product leadership and improve focus and accountability in process technology execution."

After COVID-19 onset, 25% of all US leveraged loans are now 'Weakest Links'

Emerging trends in claims frequency and driving patterns are giving a number of private auto insurers pause before they commit to additional policyholder credits. Subsidiaries of at least 13 of Michigan's 15 largest private-passenger auto insurers at the group level exercised their option under a July 8 Department of Insurance and Financial Services order to submit actuarial justification as to why they believe additional refunds are not currently warranted.

During California Insurance Commissioner Ricardo Lara's time in office, he has had to tackle not only the devastating wildfires that are becoming increasingly deadly in the state, but also a global pandemic and a wave of civil unrest that has swept through the nation. As the National Association of Insurance Commissioners moves toward a more formal approach to rid the industry of potentially discriminatory practices, S&P Global Market Intelligence caught up with Lara, who hopes to share his experiences around what California has done to eradicate inequities and increase diversity throughout the industry. 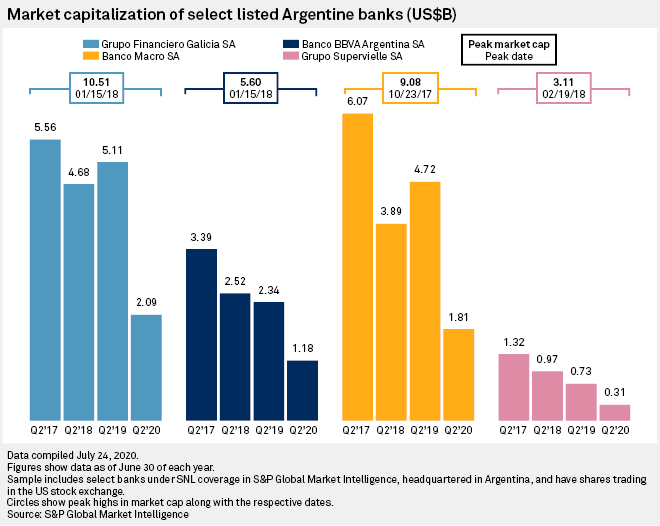 The market capitalization of the four Argentine banks that trade American Depositary Receipts, or ADRs, on the New York Stock Exchange has cratered near historic lows since peaking in 2018, although a price rally could be around the corner, analysts told S&P Global Market Intelligence. Between the end of the first quarters of 2018 and 2020, the aggregate market capitalization of Grupo Financiero Galicia SA, Banco Macro SA, Banco BBVA Argentina SA, and Grupo Supervielle SA sank by more than 85%. The drop was on par with the S&P/BNY Mellon Argentina ADR Index, a benchmark for the 17 Argentine companies that are listed in the United States, which also plunged by 85% between March 29, 2018, and March 31 this year.

Recession risks threaten the prospects for Asia-Pacific financial institutions as the effects of the COVID-19 pandemic continue to weigh on bank credit quality in the region. S&P Global Ratings’ ratings outlook bias for financial institutions in the region remains firmly negative. Negative outlooks (about 18% of ratings) significantly outnumber positive outlooks (about 2% of ratings). Remaining ratings on positive outlook represent a diminishing pool of credits influenced by idiosyncratic factors rather than systemic trends.

New legislation in the U.S. that could enable a fresh wave of sanctions against China may have international banks operating in the city on edge, but experts expect lenders to wait to see the full extent of the tensions between the two superpowers before deciding how to respond. Tensions mounted when President Donald Trump on July 14 approved the Hong Kong Autonomy Act, a move made in response to China's new national security law for the city. 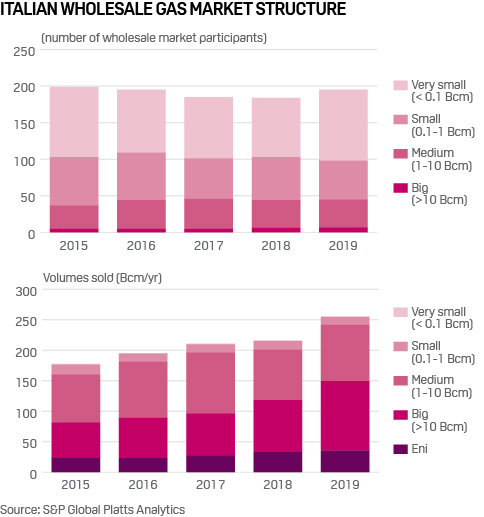 Italy has no shortage of natural gas infrastructure, from major pipelines coming from Europe and North Africa to LNG terminals. How, then, can the country still have some of the highest wholesale gas prices in Europe, rivalling even Spain, with its notorious lack of interconnections? Solving the Italian gas market puzzle is not an easy task. But it is possible to identify factors that, taken together, create a unique and enduring ecosystem where no new big players have ever managed to emerge and to push down prices through a market share strategy.

'Darkest before dawn': US oil refiners may post 44% YOY revenue decline in Q2

When U.S. refiners report second-quarter earnings, investors will be listening for executives' thoughts on where the petroleum market is headed next as it recovers from an unprecedented, pandemic-driven collapse in demand. Because of the market turmoil, S&P Global Market Intelligence consensus estimates anticipate second-quarter revenue for the top seven publicly traded U.S. refiners will have fallen in aggregate by $19.29 billion versus the first quarter and $46.89 billion versus the second quarter 2019 to $59.76 billion, leading all members of the group to post a quarterly loss.

Growing fears over a resurgence in COVID-19 cases are putting the world's oil demand recovery on hold, tempering oil price gains and sparking concerns over a new supply glut in the coming months, according to analysts. Coronavirus infection rates are rising in some of the world's biggest oil-consuming countries as they battle to contain new flare-ups with a second-wave of quarantine measures.