The Road Ahead For The U.S. Economy Gets Bumpier

Market participants in the world’s largest economy are preparing for a sharp reversal of business conditions by the end of this year and into 2023 as the U.S. may suffer a recession.

The first six months of the year brought the benchmark S&P 500 equities index’s worst performance for the period since 1970 and its 15th bear market since 1928. The Consumer Price Index jumped 9.1% year-over-year in June, the biggest boom in the inflation metric since November 1981. In a sign of the U.S. fiat currency’s strength, the dollar and euro reached parity for the first time since 2002 due to roaring energy costs and recession fears, according to S&P Global Market Intelligence. But some traditional inflation-hedging assets—including real estate, gold, and Treasury Inflation Protected Securities—haven’t been performing as expected, according to S&P Dow Jones Indices. While credit quality has proven resilient so far, S&P Global Ratings expects the second half of 2022 will likely be characterized by companies’ limited access to, and a higher cost of, credit.

Such difficult market conditions invite answers to concerns about what the rest of 2022 may bring across asset classes and markets.

S&P Global Ratings expects the U.S. will likely suffer from a period of below-potential economic growth, accompanied by an increase in unemployment, or a slow-growth recession, in 2022—to potentially be followed by a technical recession, with two or more quarters of economic contraction, next year.

“As we inch toward potential recession, we expect the Fed's stronger action will slow hiring and raise unemployment. Under such a scenario, the ‘cure’ for the U.S. economy and jobs market may feel worse than the disease. While our baseline signals a low-growth recession, the chances of a contraction (a technical recession) are rising,” S&P Global Ratings Chief North America Economist Beth Ann Bovino said in research published today. “As households shut their pocketbooks, businesses that built up inventory to meet surging demand will be left with full shelves. The Fed will ultimately get its wish, and businesses will be forced to sell at a discount, bringing down prices (and hurting profit margins).”

S&P Global Economics’ qualitative assessment of the risk of recession in the next 12 months is now at 40%, in a range of 35%-45% with the risk greater in 2023. Due to high prices permeating everywhere and everything, renewed consumer caution, and the Federal Reserve’s aggressive monetary tightening, U.S. GDP growth is now likely closer to 2% for 2022 and 1.6% for 2023, marking a downwards revision from the forecast in May of 2.4% GDP growth this year and 2% next year, according to S&P Global Ratings. U.S. households and businesses’ financial fragility is rising, but remains below historical levels.

“Against the backdrop of higher recession risk amid elevated inflation and aggressive Fed policy tightening, the number of companies issuing negative earnings guidance is rising, and many are revising guidance downward, or temporarily suspending it altogether. How consumer and business demand evolves remains a key consideration,” S&P Global Ratings said in its U.S. midyear corporate credit outlook today. “Companies continue to deal with sharply higher input costs—with a finite ability to pass along these costs. If pressures don’t ease, or if inflation begins to weigh heavily on demand, profit erosion will inevitably hit credit quality. Weakening demand is a key risk.”

Notably, however, the country’s sustained low 3.6% unemployment rate and high job growth have confused analysts aiming to forecast the recession, since increased joblessness is a hallmark of a downturn, according to S&P Global Market Intelligence.

“June saw the S&P Global U.S. composite Purchasing Managers’ Index data fall to a five-month low of 52.3, and the second lowest since July 2020. The service sector output gauge has lost considerable momentum while manufacturing growth has stalled. Most worrying is the new orders index, which signaled the first decline in demand for goods and services for two years,” S&P Global Market Intelligence said in recent research. “This index paints the gloomiest picture of the U.S. demand environment since the global financial crisis, barring only the initial pandemic downturn in early 2020. Not surprisingly, the consensus according to Refinitiv estimates, is for both U.S. manufacturing and services growth to weaken further when the flash estimates are published on July 22.”

Today is Wednesday, July 20, 2022, and here is today’s essential intelligence. 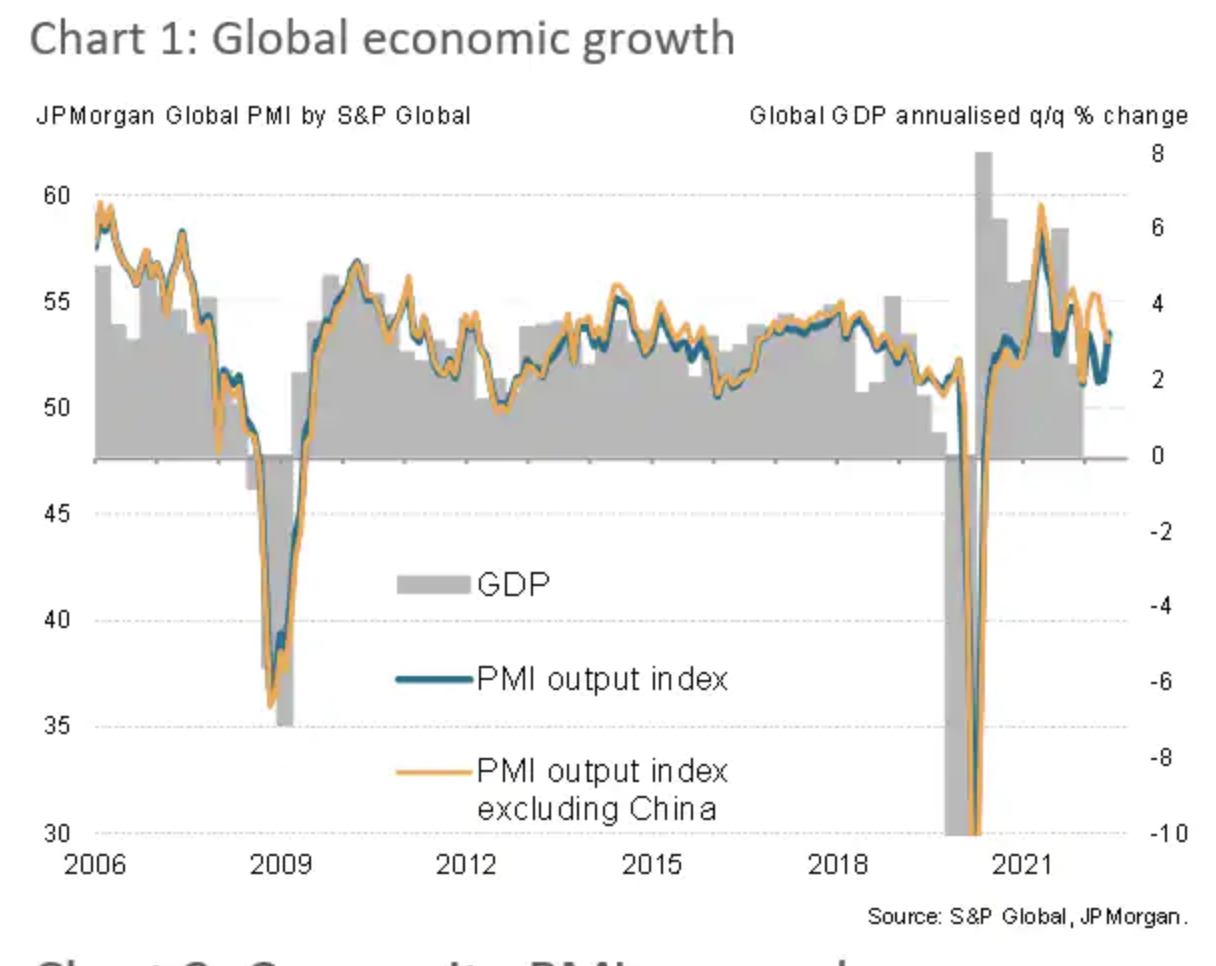 June's PMI output data had broadly come in below expectations, with a notable exception of mainland China, raising concerns that the cost-of-living crisis was dampening global growth more than anticipated—particularly in the U.S. and Europe. Forward-looking indicators such as new orders, the output-orders differentials, orders-inventory ratios, and future expectations indices all sent even gloomier signals, suggesting that output growth will cool further as we head into the third quarter.

A Risk Control Approach To Cryptocurrencies: A Tool For A Crypto Winter

Earlier this year, S&P Dow Jones Indices reported on the volatility of Bitcoin and cryptocurrencies overall. In February 2022, the market was slightly down from its all-time high in November 2021. S&P Dow Jones Indices had just launched the new S&P Bitcoin and Ethereum Dynamically Rebalancing Risk Control 40% Indices (CET Close) and saw that risk-adjusted performance over time of the Bitcoin risk control index exceeded that of the underlying S&P Bitcoin Index. 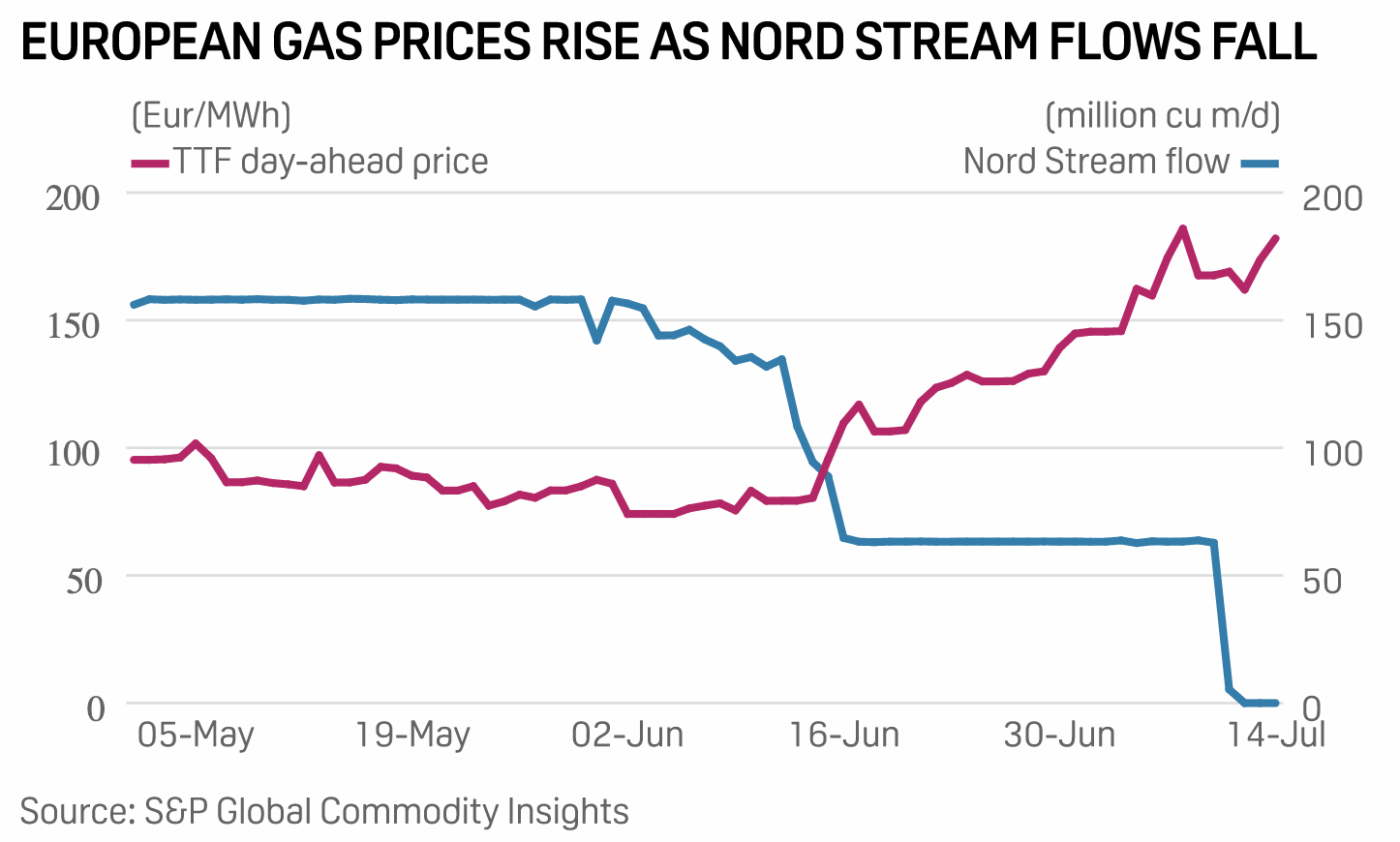 Securing Energy For Europe has re-established itself as a European gas market player after Germany took the former Gazprom unit under trusteeship and provided a Eur9.8 billion ($10 billion) loan to support procurement, managing director Egbert Laege told S&P Global Commodity Insights. SEFE, the former Gazprom Germania unit with a customer portfolio of 170 TWh/year, needed to be stabilized after it was hit by Russian sanctions on its gas and LNG supply contracts, Laege said July 14 in an interview on the sidelines of Aurora Energy's spring summit in Oxford, England. 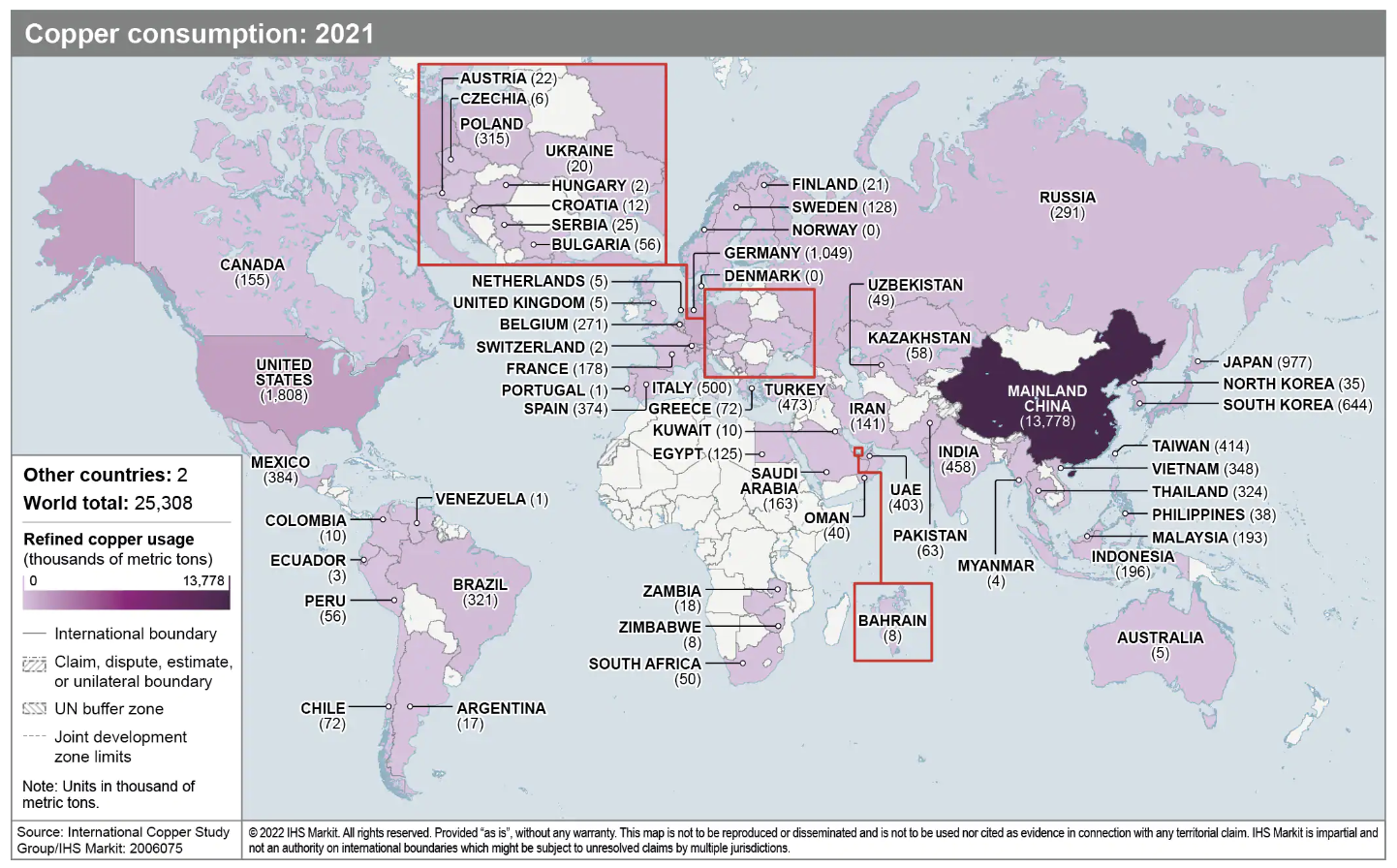 Demand for copper will double by 2035, opening a supply gap that threatens climate goals and poses serious challenges the Net-Zero Emissions by 2050. This demand growth during the energy transition—a pathway toward transformation of the global economy to Net-Zero Emissions by 2050—will be particularly pronounced in the United States, China, and Europe. India will also exhibit strong copper demand growth, more from traditional copper applications than from the energy transition. 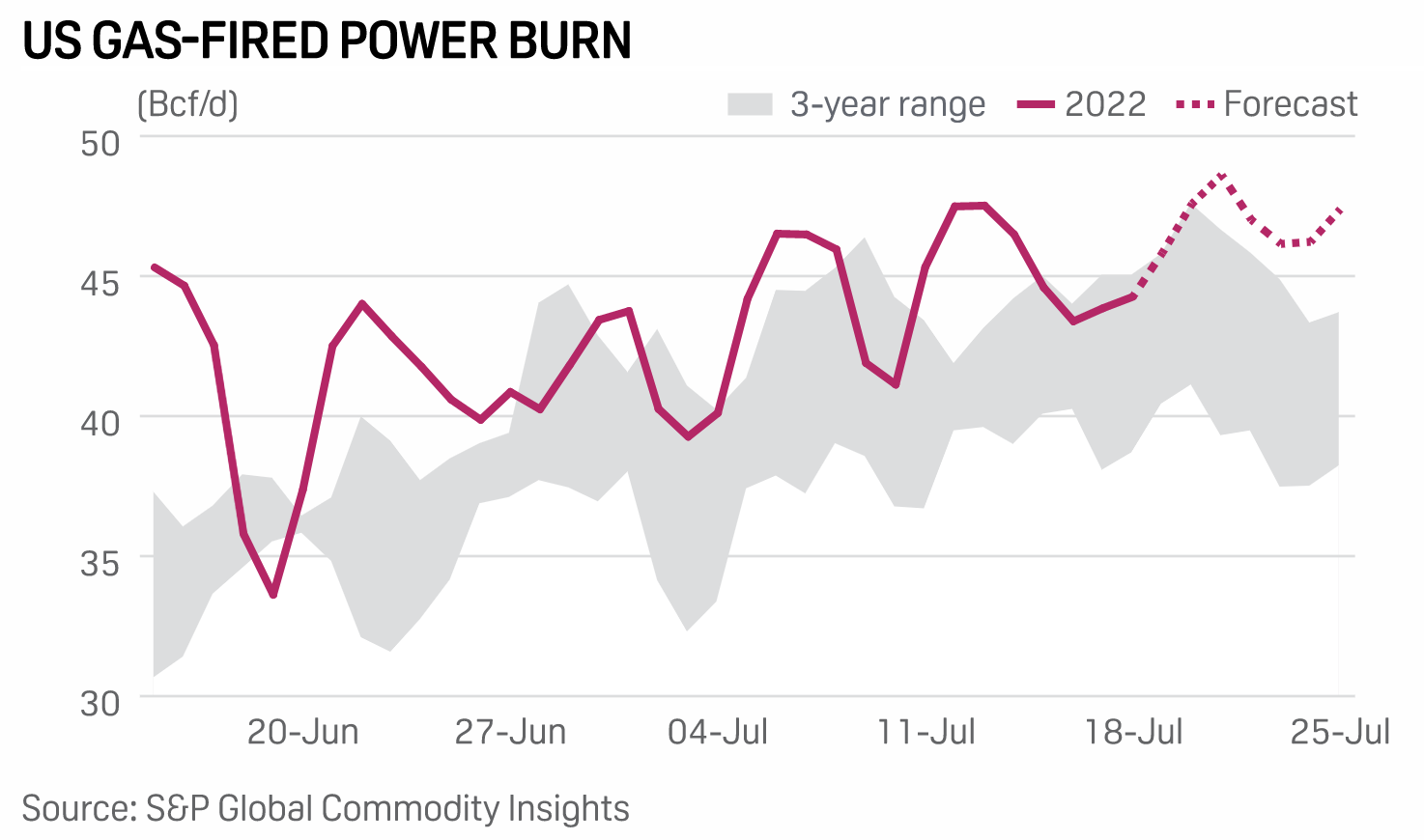 U.S. natural gas-fired power generators are bracing for record-setting demand this week as temperatures in states stretching from Texas to Kansas and Mississippi to Missouri top 100 degrees Fahrenheit. On July 21, the U.S. power burn is forecast to average 48.6 Bcf/d in what would be a new single-day demand record, according to data from Platts Analytics. Assuming the forecast is accurate, the new high would outpace the prior single-day record from July 2020 by over 500 MMcf/d, or about 1%.

Listen: Next in Tech | Episode 74: Data Platforms And Analytics

Data-driven decision-making is accelerating, and organizations need to ensure that they’ve got the data and infrastructure to fuel this imperative. Senior analyst James Curtis joins host Eric Hanselman to look at data about expectations for addressing hybrid computing environments, data movement and advanced database technologies, and why they’re critical for digitization.