Asian banks have had a tough 2022. Weak growth, rising inflation and high leverage, combined with problems in the property sector, have led to credit losses and weak earnings. But there are some bright spots.

Unlike many of their peers in other countries, Singapore’s banks should flourish from rising interest rates, according to S&P Global Market Intelligence. In October 2021, the Monetary Authority of Singapore became one of the first central banks in Asia to tighten monetary policy in the face of rising inflation. S&P Global Ratings also raised the outlook for banks in other Asian economies, such as Malaysia, that moved quickly to raise rates. Banks in South Korea and Australia have positive industry risk views from S&P Global Ratings. A recent stress test of Indian banks by the Reserve Bank of India suggests that their strong capital buffers should allow them to weather macroeconomic uncertainties.

Banks in China have been dealing with multiple challenges, all potentially traceable to the same root cause: stresses in the property sector. The mortgage strike on unfinished properties that spread virally across China now puts almost 1 trillion yuan at risk, or almost 1.3% of banks’ total loan book, according to S&P Global Ratings. The downside scenario could be significantly worse, with 2.4 trillion yuan at risk, comprising 6.4% of China's mortgage loan book. While the threat of further boycotts seems to be abating, more losses to property values could threaten bank stability.

Fraud charges at some so-called village banks in China have led to further upheaval. These smaller lenders have weaker governance than the country’s five largest banks. A police report detailing outright fraud from some banks, combined with barriers to withdrawing funds at a handful of others, has led to concerns over a bank run, which is when customers indiscriminately withdraw assets from their bank due to a loss of confidence.

London-based lender HSBC is confronting challenges with its attempt to turn to Asia. Chinese life insurer Ping An, which holds an 8.3% stake in HSBC, is demanding the bank split up to create a Hong Kong-based bank. So far, HSBC management has resisted, arguing that its status as a global lender creates more value for shareholders. HSBC has been under pressure from shareholders since suspending its dividend in 2020, according to S&P Global Market Intelligence.

The well-known issues in the Chinese property sector, which seem to be encouraging looser monetary policy in the country, are casting a pall over the general outlook for Asian banks. But that’s because of the relative size and importance of Chinese banks. In many Asian economies, banks are doing quite well. Sometimes the big picture isn’t the whole picture.

Today is Monday, August 8, 2022, and here is today’s essential intelligence. 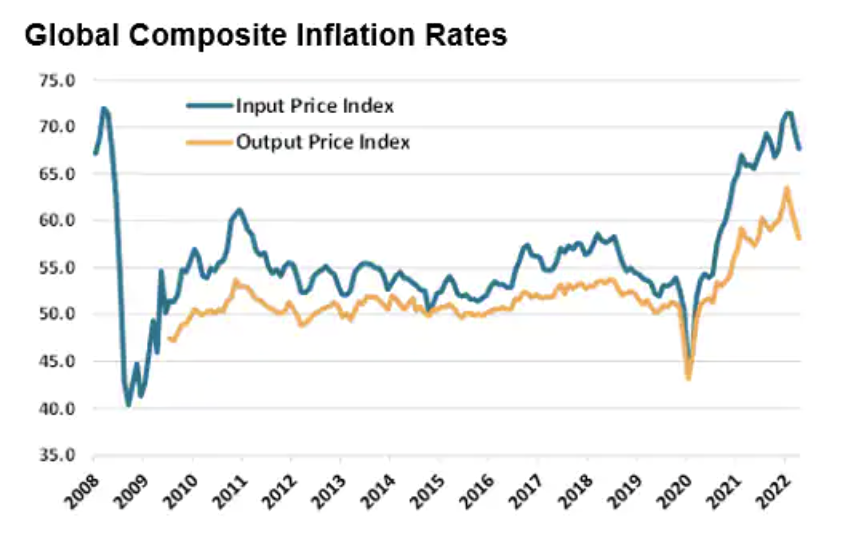 Q2 GDP updates will be due for the U.K., Russia, and Singapore in the coming week alongside a series of inflation data for the U.S., India, China, Germany, France, and Italy. At the same time, India and the U.K. will release industrial production data while Thailand will hold a central bank meeting. Attention turns to the U.K., Russia, and Singapore where Q2 GDP figures will shed light on economic performance in the midst of geopolitical uncertainty and surging inflation.

While deal discussions continue and community banks still see acquisitions as an attractive tool for growth, regulatory headwinds have made M&A a little less attractive for growth-mind companies. In the episode, Jonathan Hightower, partner at Fenimore Kay Harrison LLP, discussed the drivers of community bank M&A activity, the impact of rising rates on transactions, how most community banks already satisfy environmental, social and governance considerations, and the changing regulatory landscape for community banks, including the agencies' views of deals. 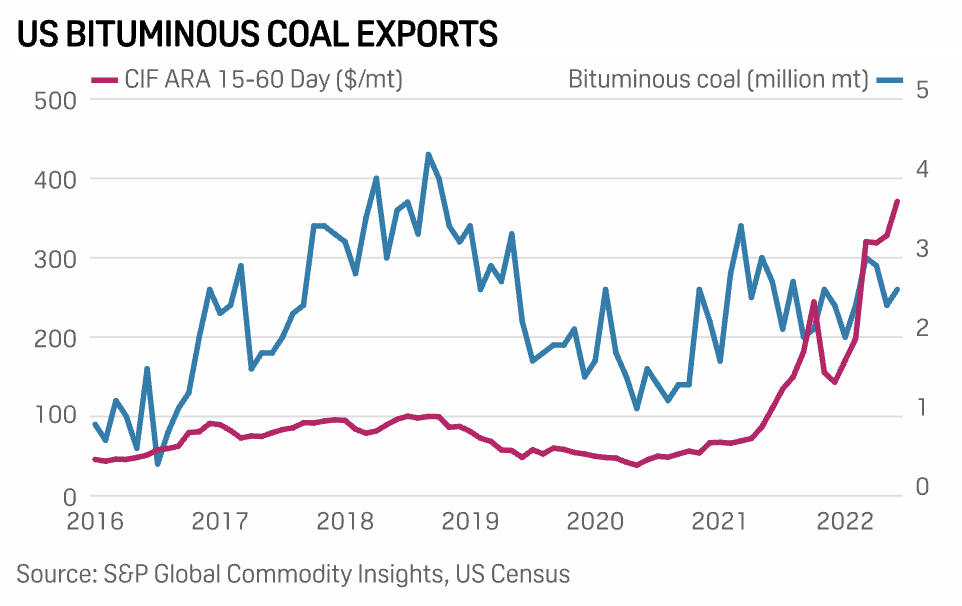 An indication of demand destruction, U.S. steam coal exports fell 15.2% on the year in June as the CIF ARA monthly average price more than tripled to $371.02/mt, according to U.S. Census Bureau data released Aug. 4. Compared with May, the CIF ARA price rose 13.2% while U.S. thermal coal exports fell 1.3% to 2.8 million mt. 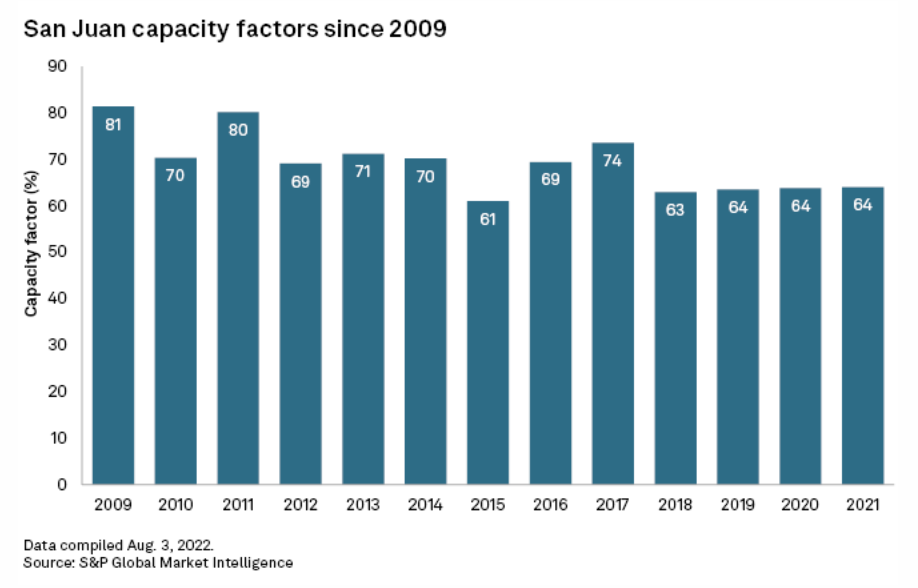 In less than 60 days, the San Juan Generating Station is scheduled to produce its final kilowatt-hour of power and release its last pound of CO2 into the atmosphere. Proponents of a $1.4 billion-plus carbon capture project at the New Mexico coal-fired plant hope the facility will be transferred to new owners and keep operating past its Sept. 30 retirement date. Retaining high-paying jobs and much-needed local tax revenue are priorities for labor unions and the City of Farmington, which owns 5% of the plant. 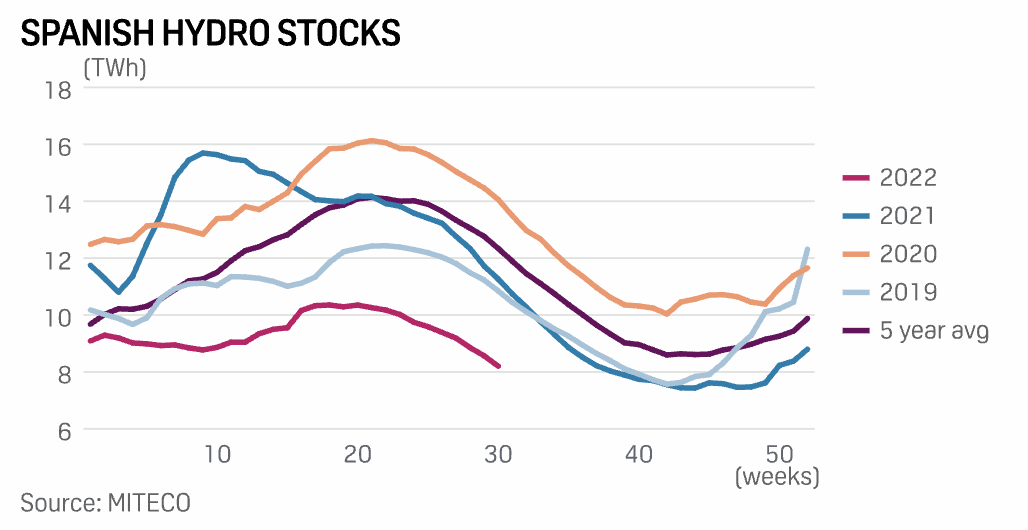 Brutally dry conditions in parts of Southern Europe have led to a significant downturn in hydropower generation so far in 2022, exacerbating an already perilous situation in the energy market as the EU grapples with the realities of ditching Russian gas. Some of Europe's largest hydropower operators, especially those with plants in France, Italy, and Iberia, saw production decline steeply in the first six half due to sustained high temperatures and low rainfall. 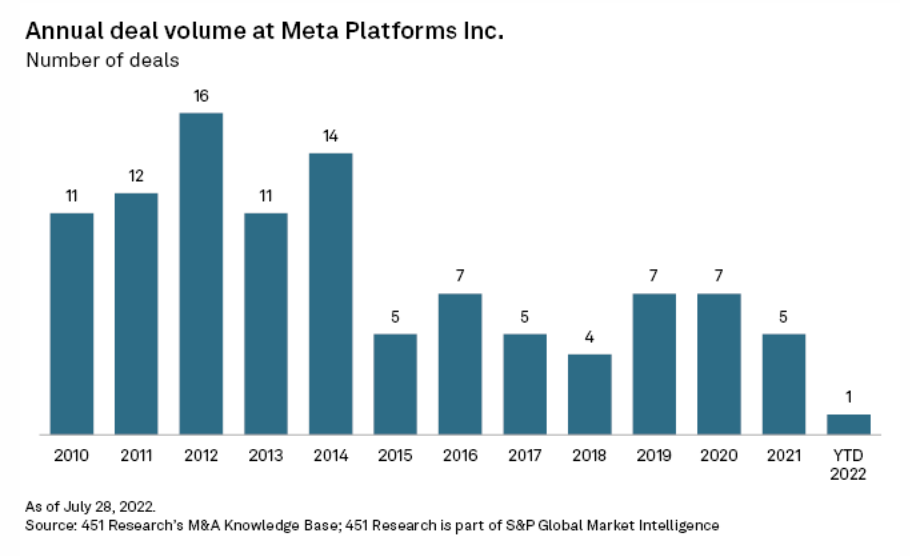 Meta Platforms Inc.'s deal activity is falling as the company faces growing regulatory pressures and shifts its focus to the metaverse. At its most acquisitive in 2012, Meta pursued 16 acquisitions, including the $1 billion purchase of Instagram LLC. The Instagram deal and Meta's 2014 acquisition of messaging company WhatsApp Inc. are now the subject of an ongoing Federal Trade Commission lawsuit related to market dominance concerns.