Hurricane Ida weakened to a tropical storm on Monday and now threatens Alabama, Mississippi, and adjoining states with heavy rainfall, tornadoes, and flash-flooding—after leaving Louisiana with nearly half of the state’s population without power and one of the country’s crucial energy centers at a standstill.

As the U.S. deals with extreme weather events, signs of the country’s climate risk are compounding. Exactly 16 years since Hurricane Katrina wreaked havoc, Louisiana is suffering from another serious storm after enduring Tropical Storm Marco and Hurricane Laura this time last year. Whipping with maximum sustained winds of 150 miles per hour that wiped out all eight of the power lines that bring electricity into the New Orleans area, the storm cut power for approximately 1.2 million customers in Louisiana. Residents could remain with outages for weeks due to the physical damage alongside the ongoing implications of the coronavirus crisis, according to Entergy, the largest utility serving the area. Days before the Category 4 hurricane made landfall on Aug. 29, a succession of energy producers in the Louisiana area of the Gulf of Mexico region moved their operations offline, ultimately totaling nearly 95% of the entire U.S.’s oil and gas production, according to S&P Global Platts. Energy prices soared to multi-month highs due to the disruption.

“Many plants have been hardened against hurricanes, but disruptions in operations are still very likely due to flooding, power outages, and personnel dislocations,” S&P Global Platts Analytics said in a note.

Refineries, including energy giant Phillips 66’s 255,600 barrels-per-day Alliance refinery in Belle Chasse, La., have shut down. Petrochemical production plants in the pathway of the storm stopped operations along the Mississippi River. In the aftermath of the worst of the storm, many companies with operations in Louisiana said that damage assessments and restarting plans could take days. The majority of exploration and production companies in the area remained offline on Aug. 30, according to S&P Global Platts.

Close to 4.4 million barrels per day of operating refinery capacity laid in Ida’s path, with the severity of the storm’s wind speed serving as the key determinant of potential damage to Gulf Coast refining centers, according to S&P Global Platts Analytics. As of Aug. 30, S&P Global Platts Analytics estimated that 75% of Louisiana’s refining capacity, amounting to roughly 2.2 million barrels per day, was offline.

"When the dust has settled in the next couple of days, we'll know exactly what kind of damage there is, and when it is feasible to come back to operation," a Louisiana petrochemical producer source told S&P Global Platts.

"Think we won't see much demand today as people get their bearings and decide what to do with their ships post-hurricane," a Houston spot bunker supplier told S&P Global Platts on Aug. 30. "Hearing it may be two days until we see NOLA reopen for vessel movements. Everyone just waiting for updates."

Hurricane Ida largely spared the liquified natural gas market any major interference. After Hurricane Laura made landfall near the two major LNG terminals and knocked out power there for weeks, Cameron LNG and Cheniere's Sabine Pass in southwestern Louisiana weathered this storm mostly unscathed and in operation. Likewise, exports from the region remained strong and at the favorable levels seen in recent weeks, according to S&P Global Market Intelligence pipeline flow data. Still, some cargo shipments of LNG from the Gulf area to Japan could be delayed due to the hurricane, an official from Japan’s Ministry of Economy, Trade, and Industry told S&P Global Platts.

Today is Tuesday, August 31, 2021, and here is today’s essential intelligence. 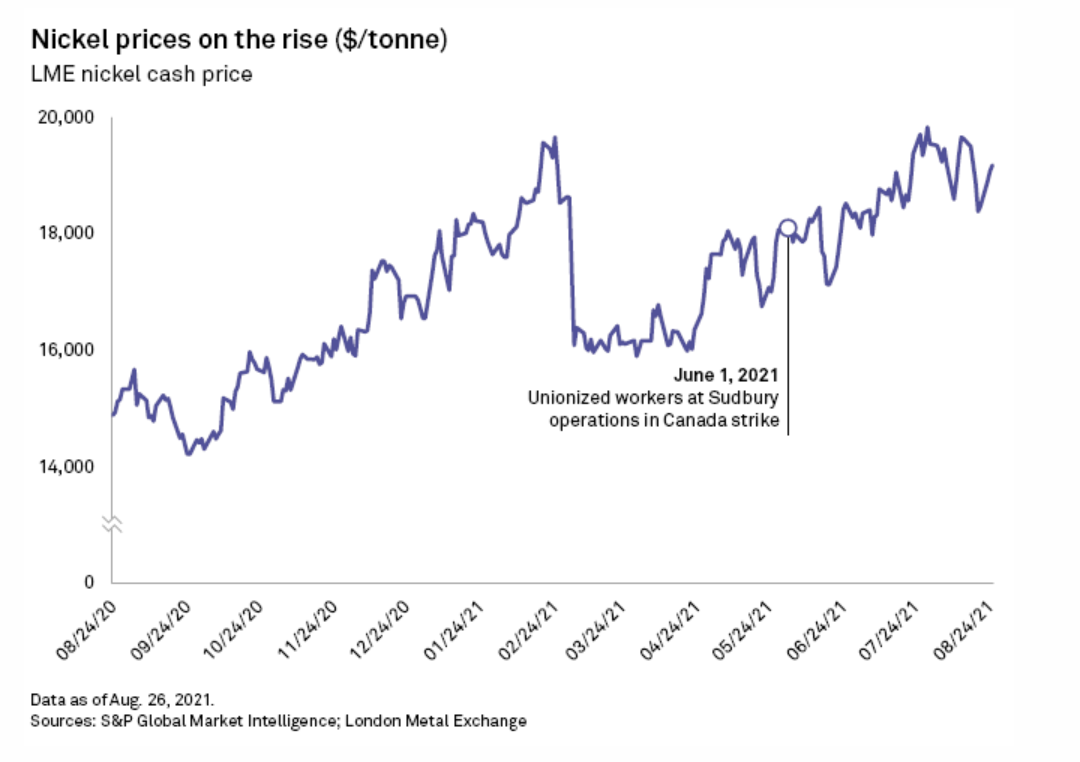 A rush of labor strikes rattled mine operators this summer as negotiations and walkouts at operations across the Western Hemisphere threatened to exacerbate a supply crunch for key metals needed to transition the world to clean energy. Unions have flexed their organizing muscles amid a period of high commodity prices and rocketing demand for metals needed for infrastructure, renewable energy and electric vehicle batteries. Workers have fought for, and in certain cases won, improvements in compensation and benefits. 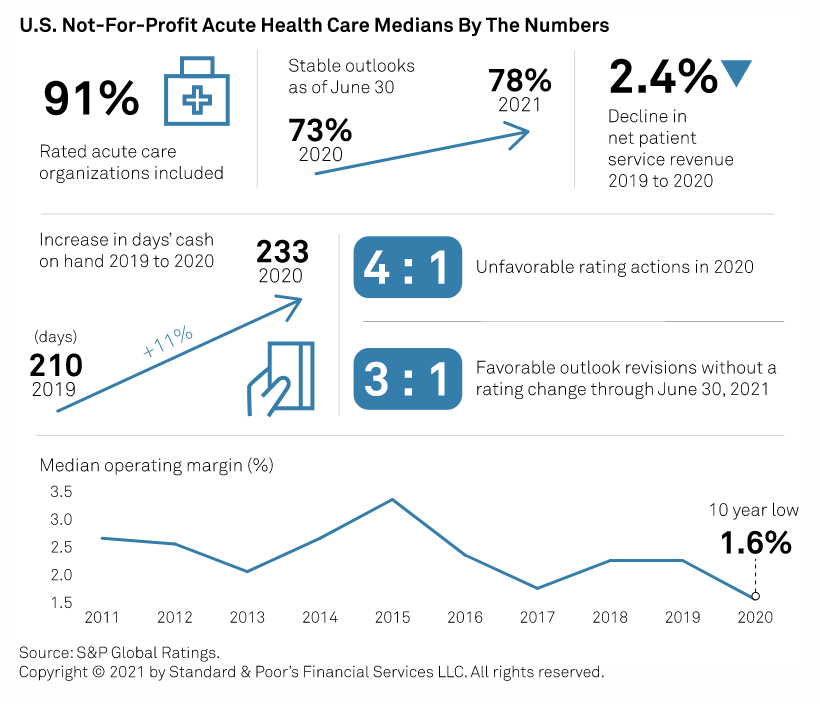 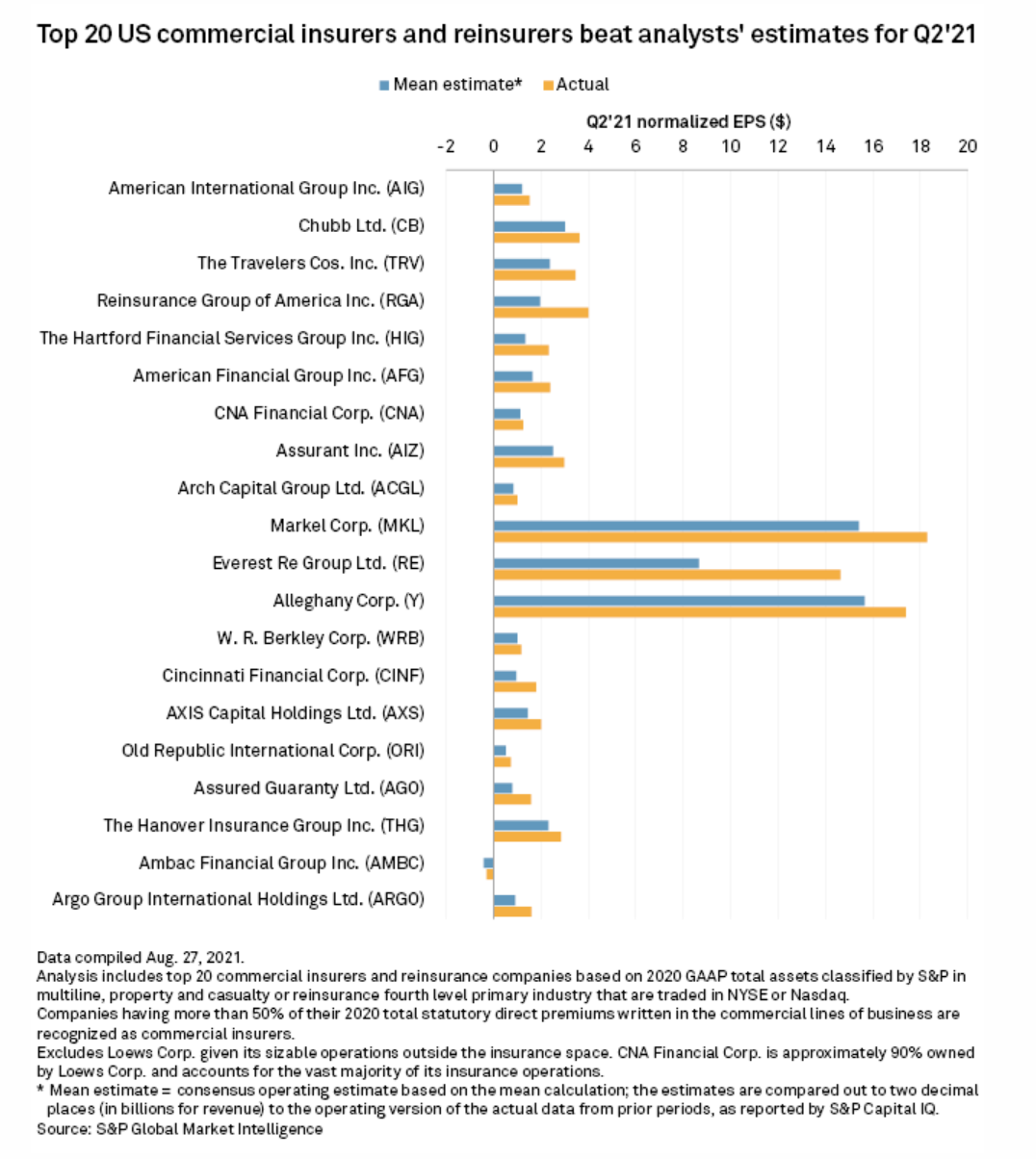 All 20 of the largest U.S.-listed commercial insurers reported EPS beats in the second quarter, according to an S&P Global Market Intelligence analysis, benefitting from better pricing and lower catastrophe losses during the period. UBS analyst Colm Kelly said the earnings beats provide evidence for investors that the positive rate momentum seen in U.S. commercial lines in the last two to three years is flowing through to the bottom line, showing up in better-than-expected underlying performance or prior-year development.

Stronger North American power demand has had a muted effect on wholesale power prices, which have been driven sharply higher by surging natural gas prices, an S&P Global Platts analysis shows, but resurging COVID-19 cases may mitigate power price strength through the end of 2021.

ANALYSIS: Corn Buyers Unlikely To Get Reprieve From Higher Prices In 2021-22

Global corn buyers are expected to deal with high prices for another season in marketing year 2021-22 (October-September) and possibly beyond due to supply troubles, weather risks and elevated prices of alternative feed grains. Corn prices are currently supported by the steep fall in Brazil's production due to drought and shrinking stock levels in the US. 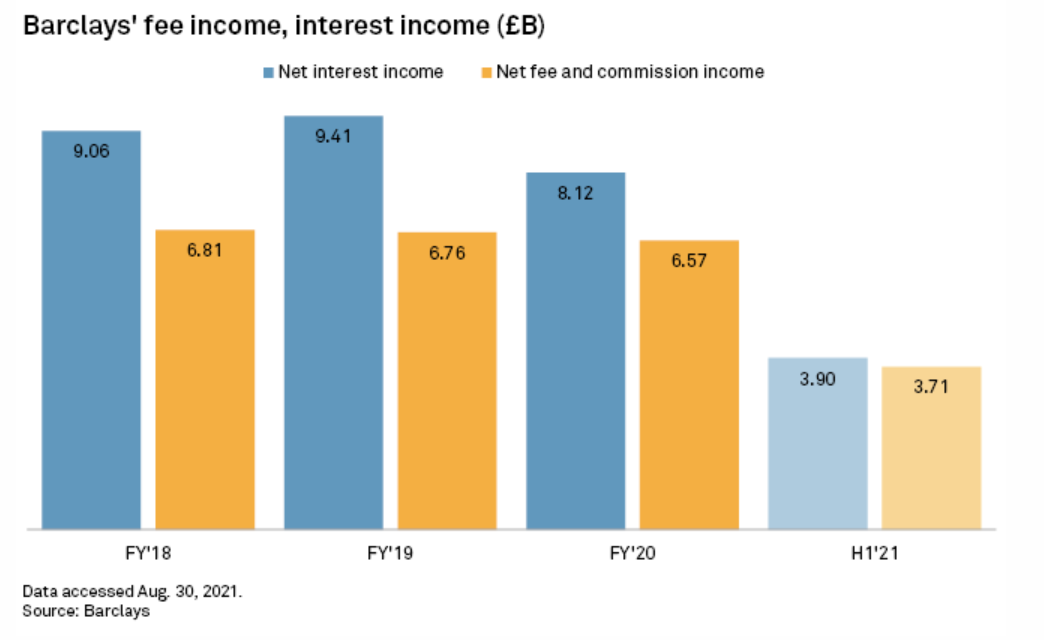 Barclays PLC's acquisition of a $3.8 billion U.S. credit card portfolio will help bolster revenues at a time when income is under pressure. The U.K. bank agreed to acquire a portfolio of U.S. co-branded and private-label credit card accounts and receivables issued in partnership with apparel retail company The Gap Inc. from Synchrony Bank, a unit of Synchrony Financial. The acquisition is part of the British lender's wider strategy to pursue further credit card partnerships in the U.S., which also helps boost the group's income amid a low interest rate environment.

Chip Shortages Stick Around While The World Waits For More Capacity 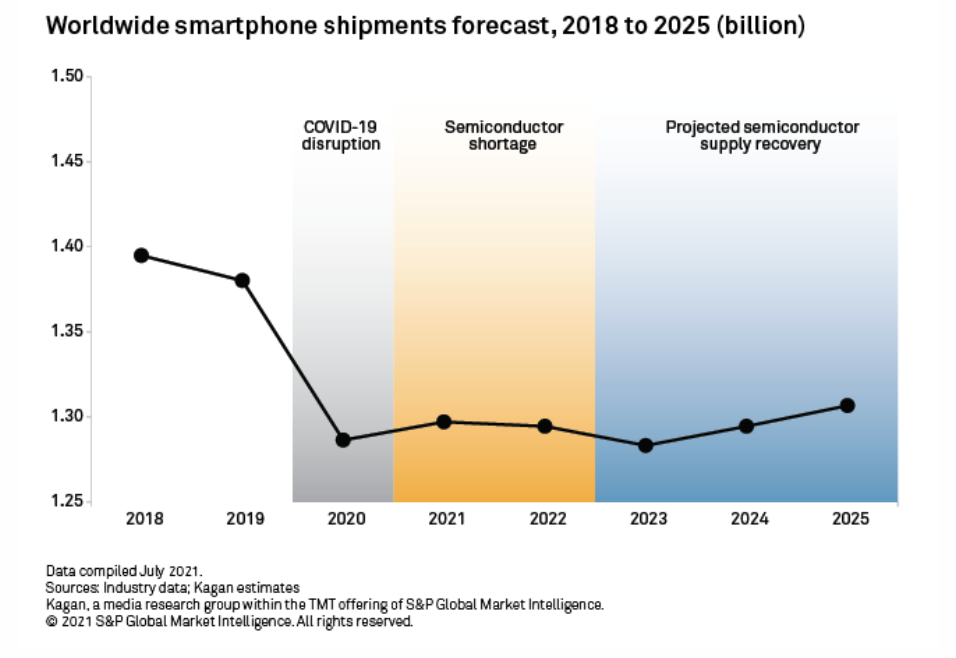 The pandemic-fueled global semiconductor shortage has broadly affected the consumer electronics, computing and telecommunications equipment segments, and a quick resolution is complicated by infrastructural challenges endemic to a sector long accustomed to boom-bust cycles. The years-long lead times needed to get a new fab up to speed for volume production will result in the inability to see a noticeable impact to semiconductor supply before 2023 at the earliest. While chip manufacturers have made moves to address shortages, many are being cautious as the investment required is substantial and the return on their capital expenditure investments is not guaranteed.

The Federal Trade Commission's record-high level of merger reviews stands to have an uneven impact on the technology sector. While larger tech firms will continue to face heightened scrutiny, smaller technology deals, which drive the bulk of sector M&A, are likely to continue unimpeded.

After a late start converting to 5G, Apple Inc. is quickly making share gains among adopters of the next-generation wireless technology — a trend expected to continue with the company's upcoming fall device launches. The selling point for the new iPhone this year is expected to be 5G, especially for Apple fans who are still holding on to aging 4G devices.

With its long-time CEO stepping back, AMC Networks Inc. is at a turning point as adapts to a media environment that is increasingly going digital. Under Josh Sapan's 26-year tenure as CEO, AMC Networks grew its stable of linear cable networks. But looking forward, the company must find a way to compete in the rapidly evolving streaming ecosystem. Analysts say new leadership may help on this front, but note that a sale to a larger entity may also be necessary. 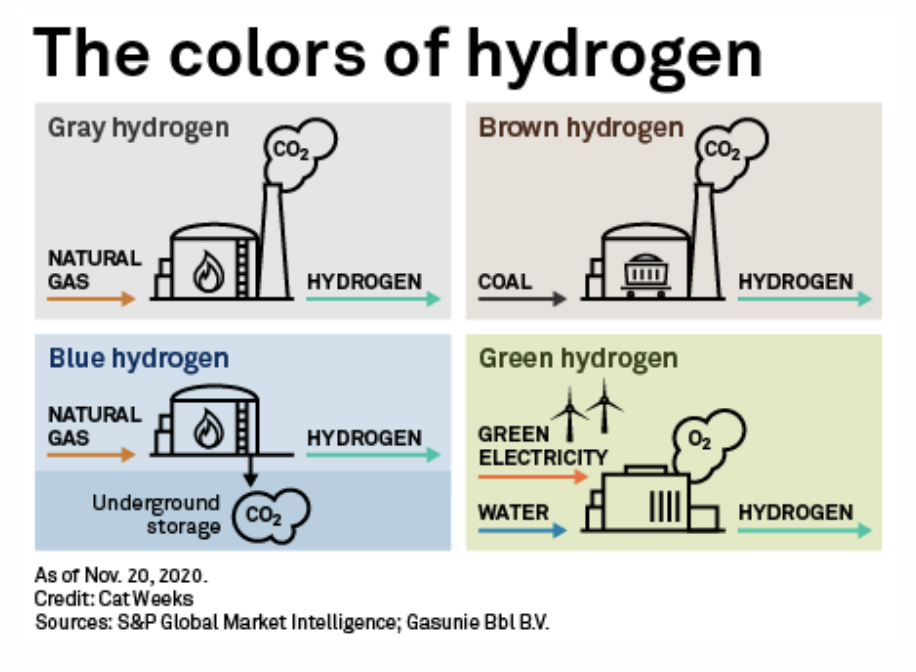 As a net importer of fuels, Chile has not been a significant player in global energy markets. But the sun-drenched, wind-rich South American country aims to become a titan in the burgeoning green hydrogen economy, setting a goal to become one of the world's top three exporters by 2040.

In the face of state inaction on nuclear subsidies, the imminent retirement of Exelon Generation's Byron and Dresden nuclear plants in Illinois is expected to boost coal- and gas-fired generation and make it harder to achieve state and federal carbon reduction goals. Exelon has said it plans to shut the two-unit, 2,346-MW Byron plant Sept. 13 and the two-unit, 1,805-MW Dresden plant in November unless the Illinois General Assembly approves subsidies to keep the plants from losing money.

Neil Chatterjee began his tenure as a member and former chairman of the Federal Energy Regulatory Commission by backing a Trump administration plan to save ailing coal plants. But his five-year journey at FERC culminated in a final meeting in July where current Democratic Chairman Richard Glick noted Chatterjee will be leaving the commission with a new moniker: "the Green New Neil."

As August comes to a close, Washington, DC, is ramping up again with energy issues before the Federal Energy Regulatory Commission. On the natural gas side, the commission could start answering longstanding questions about how it will evaluate pipelines and LNG facilities in the face of opposition and pressure to weigh climate change impacts. In terms of electric markets, FERC recently kicked off a new proceeding that could revamp its transmission policies to help connect more renewable energy sources to the grid. The commission will also examine PJM's proposed "focused" minimum offer price rule, a contentious proceeding aimed at limiting the exercise of buyer-side market power. 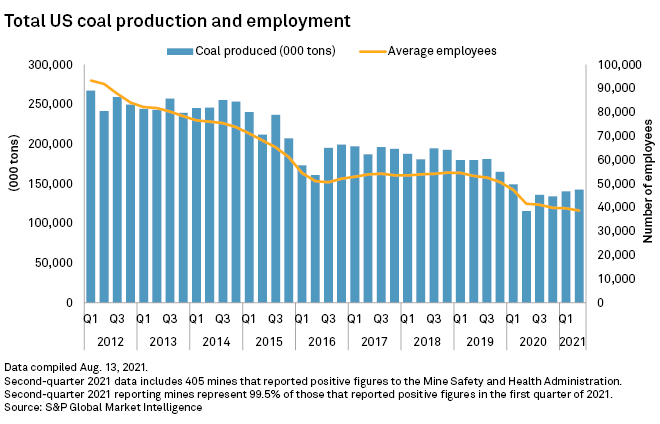 U.S. coal production bounced back in the first half of 2021 from early pandemic lows set in the first half of 2020, but average quarterly employment in the sector has not similarly recovered. Total U.S. coal output dipped substantially in early 2020 as reduced demand drove down energy consumption during widespread quarantining efforts. Production has steadily increased since the second quarter of 2020, though it has yet to climb back to the level reported in the first quarter of 2020. Meanwhile, average quarterly employment in the coal sector has steadily declined after a sharp drop in the second quarter of 2020.

The contents of a draft proposal that would purportedly lower biofuel blending requirements for the extended 2020 compliance period and for 2021 could force the White House to reveal its hand on an issue that has long pit the farm and ethanol lobby against certain oil interests. Thus far, the White House has been silent on biofuel policy issues pending before the Environmental Protection Agency.