Encouraged by improved operating conditions, mergers and acquisitions (M&A) have exploded across North American markets so far this year.

In the first half of this year, North American M&A deals totaled $1.2 trillion in disclosed value, up dramatically from the $287.5 billion in the first half of 2020, and the first time that deal value has exceeded that threshold over three consecutive periods, according to S&P Global Market Intelligence data. This second quarter saw companies announce 5,712 deals totaling a combined $604.52 billion with U.S. or Canadian targets—coming close to the 5,808 announced in the first quarter, which was the highest quarterly total this century. The ongoing boom of M&A activity in region has generated a 12.5% quarter-over-quarter increase in aggregate advisory revenue for investment banks, according to another S&P Global Market Intelligence analysis.

Despite the spread of the delta variant worldwide, the global economic recovery is continuing with strength. Current conditions for companies offer some stability after last year’s pandemic-prompted disruptions and pressures. S&P Global Ratings forecasts that global corporate capital expenditures will expand 13.3%  in 2021 across all regions and almost all industries, which would mark the largest annual increase since 2007. This year may see the global economy’s 2,000 largest nonfinancial companies by capex spending $3.7 trillion by year-end, armed with a cumulative $7.9 trillion in cash on their balance sheets, according to S&P Global Ratings. This extra cash could be spent on additional M&A deals.

In Canada, the telecom sector is facing a new frontier due to M&A deal-making. In the U.S., extra cash on balance sheets, low interest rates, and efforts to reposition for a post-pandemic world have driven a frenzy of private equity-sponsored M&A deals, totaling 341, in the first half of this year. Additionally, the banking industry in the world’s largest economy is enjoying a revival of M&A activity, with the 19 deals announced in July pushing the first half total as of Aug. 9 to 116, according to S&P Global Market Intelligence data. This year’s sector activity thus far, valued at $38.99 billion, surpasses the 111 banking M&A deals valued at $27.84 billion seen during the entirety of 2020. Moving forward, lawyers and other M&A experts told S&P Global Market Intelligence that smaller banks could suffer slower processes or entirely halted deals under a new Biden Administration order targeting M&A activity.

"There is an incredible, massive merger wave," Robyn Shapiro, communications director at the anti-monopolist organization American Economic Liberties Project, told S&P Global Market Intelligence in an interview. "Based on what we're seeing, 2021 is on track to be an unprecedented year for acquisitions."

Today is Monday, August 30, 2021, and here is today’s essential intelligence. 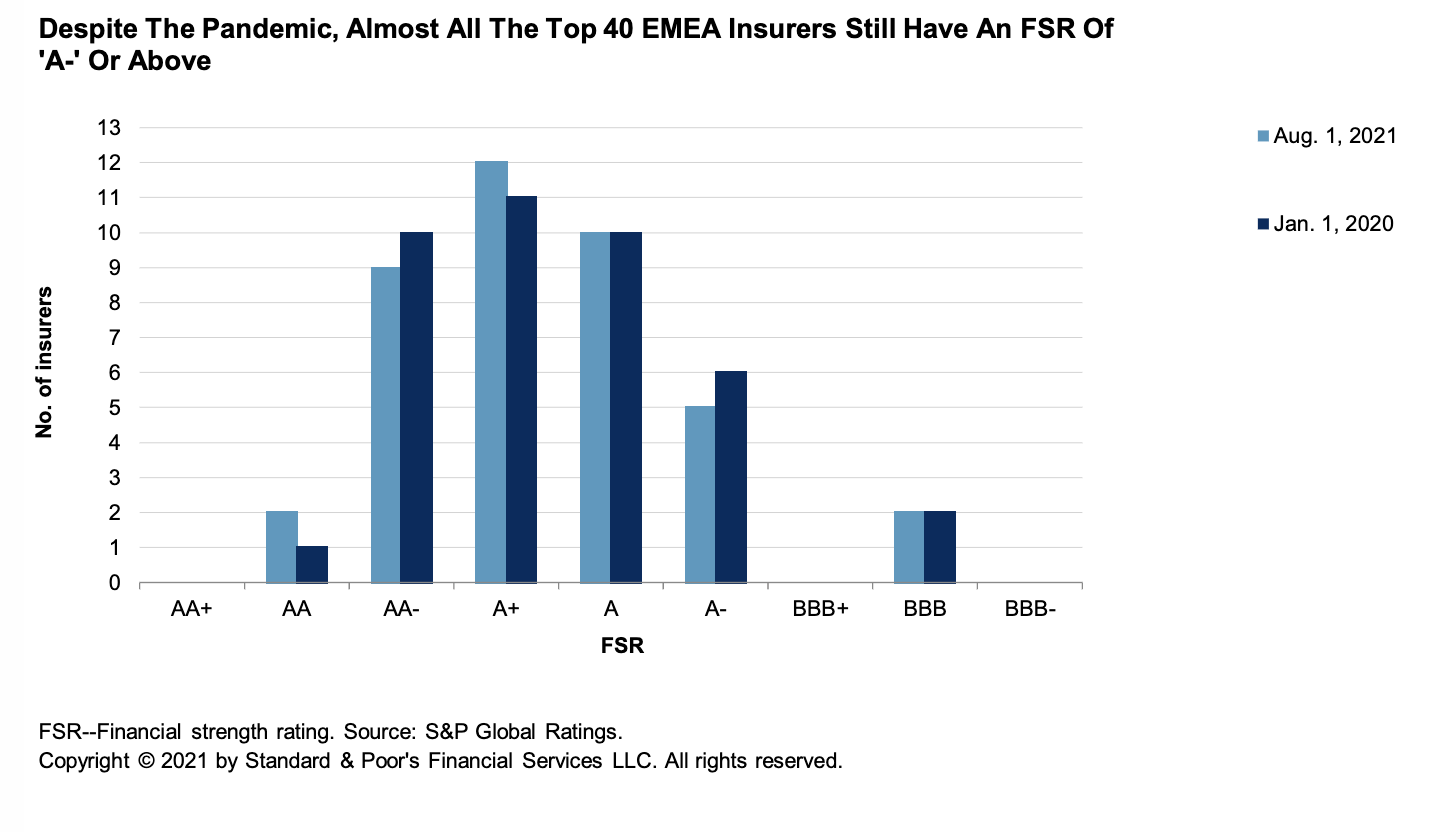 In 2020, COVID-19-related claims largely shaped insurers' profitability, with a few facing earnings pressure. However, given the relatively modest scale of the losses, as well as the mitigating actions taken by management teams, the pandemic was an earnings event for the insurance industry. On the investment side, most insurers hold highly rated liquid bonds. Higher capital requirement needs under Solvency II for high-risk assets—such as equity and real estate—discourage insurers in the European Economic Area from materially increasing their exposures in these asset classes. Volatile capital markets, low interest rates, and the potential downward migration of ratings on corporate bonds are key risks that the top 40 EMEA insurers could face this year. Despite disruption caused by the pandemic, the insurance sector was one of the most resilient in 2020, and S&P Global Ratings expects that to remain the case in 2021.

With oil and natural gas prices back from their 2020 lows, the credit crunch for U.S. oil and gas firms has subsided, and producers are reporting positive income and cash flows, fewer bankruptcies and better rates for borrowing. The risk of U.S. producers defaulting on loans has dropped by 88% on average since the oil crash in March of last year.

Capital Raises From Infotech Sector Simmer Down In July 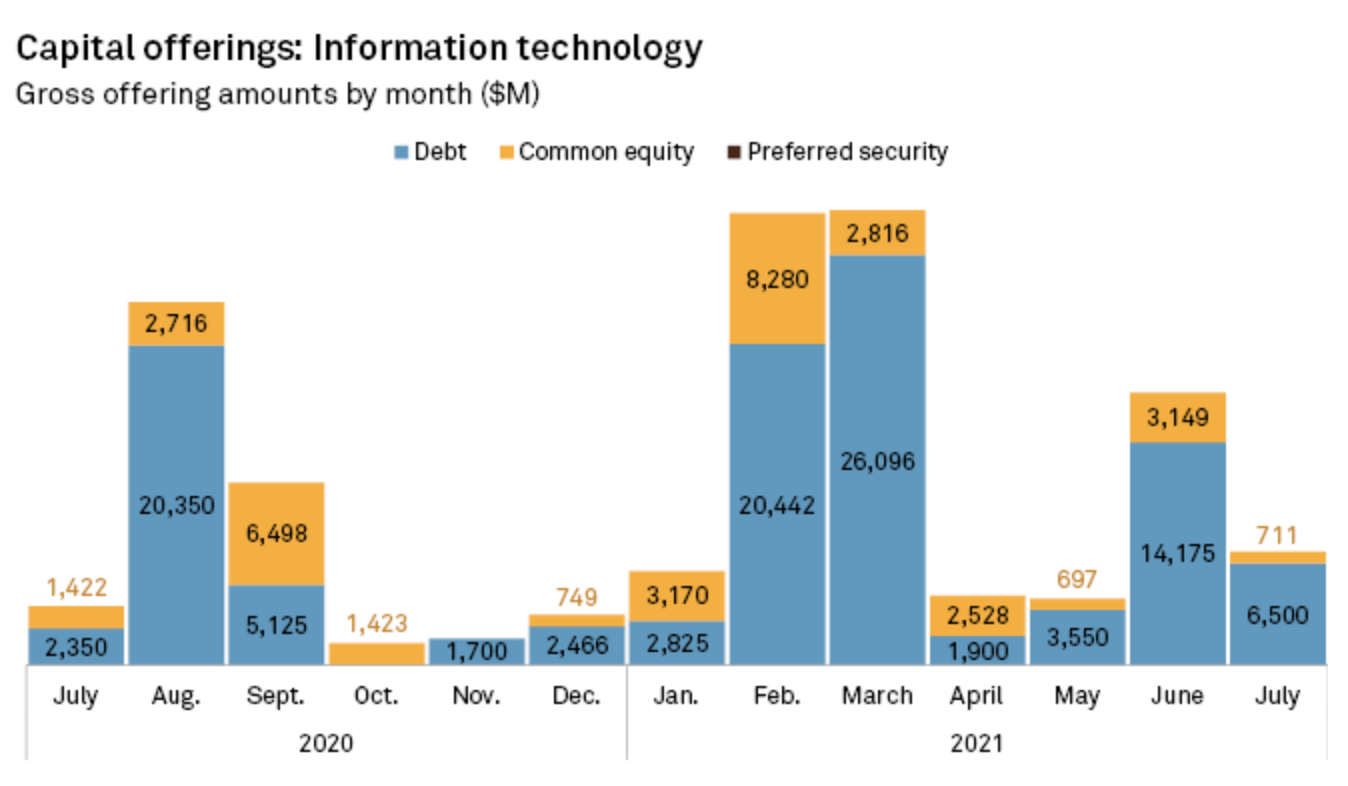 Following a big June, publicly traded information technology companies in the U.S., Canada and Bermuda raised only about $7.21 billion through capital offerings in July. The majority of capital raised during the month came through senior debt offerings totaling $6.50 billion. The sector also raised about $711 million from common equity offerings. 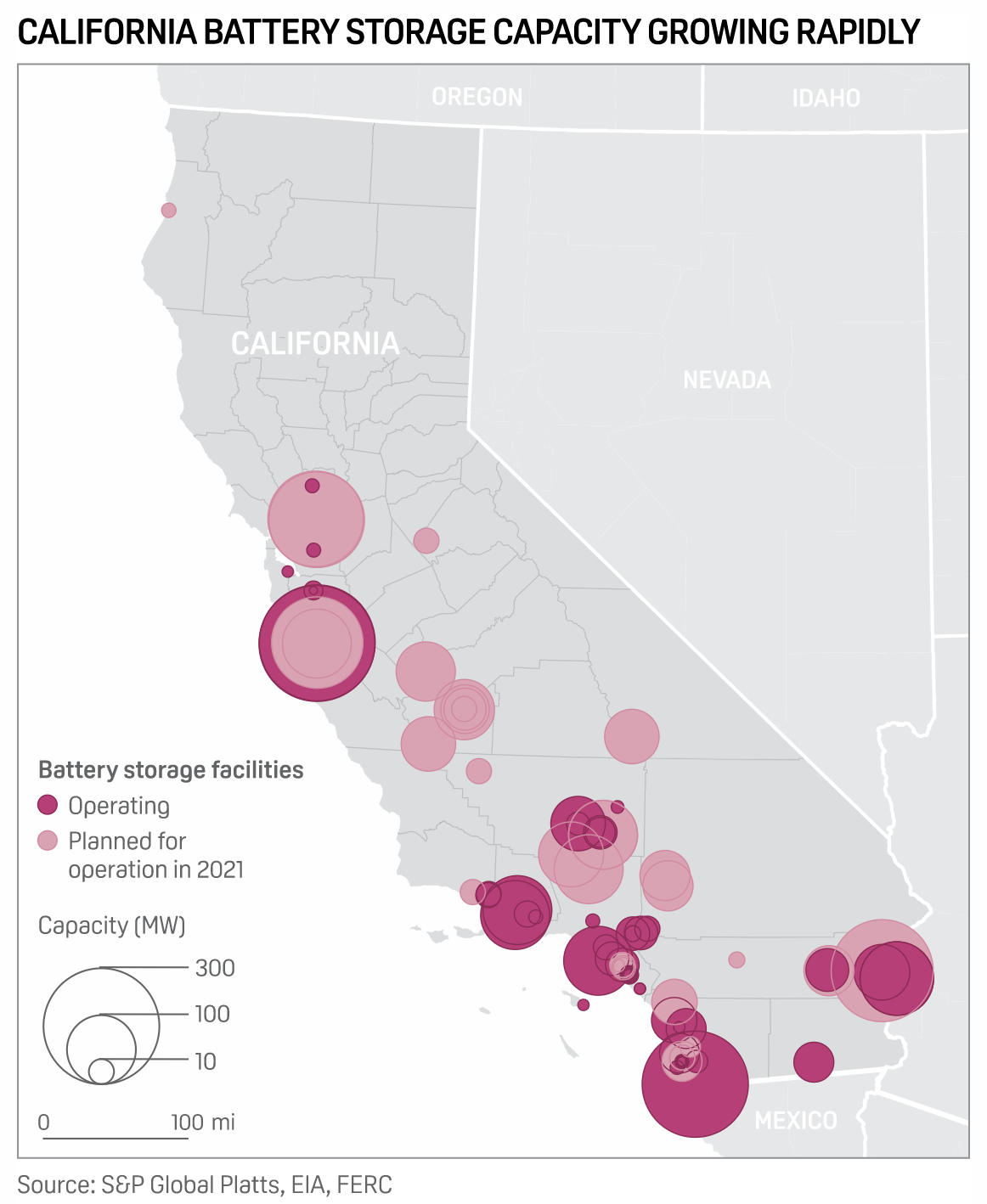 Battery storage is taking off in California with nearly 1.2 GW of capacity added in the last year and expected to double before the end of the year, despite COVID-19-related supply chain delays that have helped boost natural gas demand, along with lower hydro and imported generation.

Thailand proposes to achieve carbon neutrality by 2065-2070 under a new energy plan that could see renewable energy account for a 50% share in its power mix, displacing natural gas which is currently the mainstay of its power generation sector. The Southeast Asian country's carbon neutrality target is significantly staggered from the 2050 goal being pushed by the United Nations, and even lags the net zero 2060 goal set by China, but is still ambitious for country that lacks access to modern energy infrastructure.

Upstream producers said they have begun moving nonessential crews from oil and gas platforms in the U.S. Gulf of Mexico as Tropical Depression Nine, which could strengthen into a hurricane within two days, approached Gulf waters. In addition, Shell said it has shut in production at its Stones field as it prepares to detach the production vessel from its buoy and move it to a safer location. 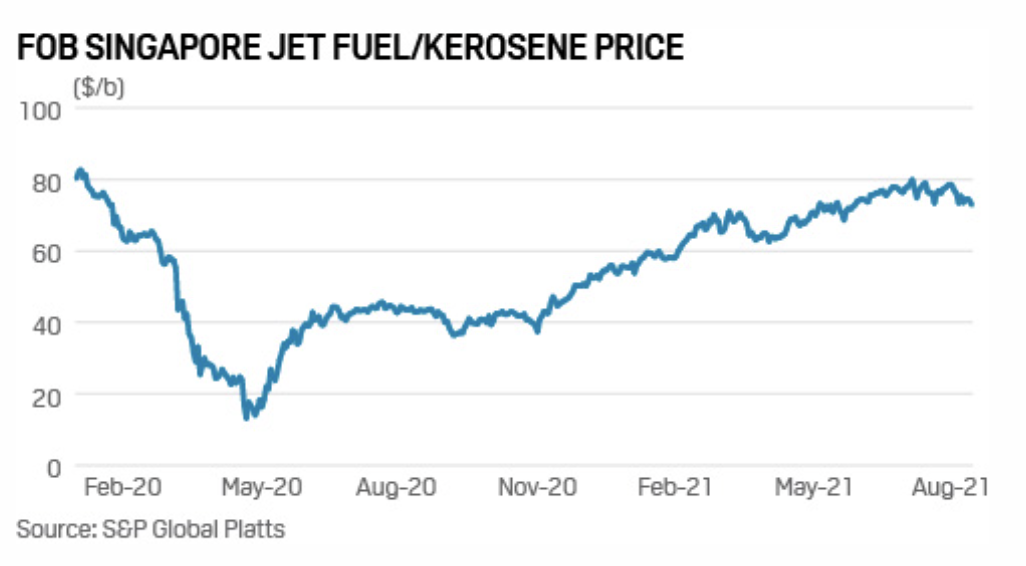 Jet fuel hedging is making a sustained comeback for the first time since Q2 2020, with activities seen gaining momentum in the futures exchange. But Asia's jet fuel market—the most severely affected oil product by the coronavirus pandemic—was still far from being back to normal. The aviation industry remains plagued by uncertainties, complexities and volatilities.

China has carried out a series of contingency measures in the past few months to prevent coal and power supply disruptions, and curb price spikes amid peak summer demand and surging international prices. The measures underscore the government's role in Asia's generation fuels markets and prices.

Natural gas basis prices at the West Texas Waha Hub could undergo sustained pressure through September as pipeline repairs and maintenance work in Arizona and Southern California continue to push back on westbound gas transmissions from the Permian Basin.

OPEC and its allies will convene Sept. 1 in a volatile oil price environment amid pressure from the U.S. to increase crude supplies and concerns about the world's continued struggles with COVID-19 variants.