The U.S. Food and Drug Administration’s full approval of the Pfizer-BioNTech COVID-19 jab is a victory for biopharmaceutical companies and the public at large as the pandemic rages onward.

Public health experts are hopeful that the Pfizer vaccine’s official endorsement for use in individuals aged 16 years and older will improve confidence in coronavirus vaccines and increase inoculation rates.  Concerns continue over the delta variant, and approximately 85 million Americans remain unvaccinated. The jab has been distributed since December 2020 via emergency use authorization, and usage of the Pfizer vaccine was expanded for those 12 years and older this May. Additional vaccines that have been deployed under emergency use authorization—including Moderna’s and Johnson and Johnson’s—remain under that mandate while other new entrants may soon hit the market.

“The FDA’s approval of this vaccine is a milestone as we continue to battle the COVID-19 pandemic. While this and other vaccines have met the FDA’s rigorous, scientific standards for emergency use authorization, as the first FDA-approved COVID-19 vaccine, the public can be very confident that this vaccine meets the high standards for safety, effectiveness, and manufacturing quality the FDA requires of an approved product,” Acting FDA Commissioner Janet Woodcock said in an Aug. 23 statement. “While millions of people have already safely received COVID-19 vaccines, we recognize that for some, the FDA approval of a vaccine may now instill additional confidence to get vaccinated.”

"I am hopeful this approval will help increase confidence in our vaccine, as vaccination remains the best tool we have to help protect lives and achieve herd immunity," Pfizer CEO Albert Bourla said in an Aug. 23 statement.

The FDA’s decision will likely expand Pfizer’s market share for continued  COVID-19 vaccine sales as the company conducts trials for a vaccine targeted at the delta variant, and also has the potential to expand trust in the vaccine and improve vaccination rates, Edward Jones analyst Ashtyn Evans told S&P Global Market Intelligence on Aug. 23. "We believe Pfizer will benefit in the near term from profit from the vaccine, which the company can use for internal R&D spending and for acquisitions to strengthen its innovative portfolio," she said.

In the meantime, other analysts told S&P Global Market Intelligence that Pfizer may not see near-term profits from any third or booster shots needed and sold due to adequate vaccinate supply already existing in the market.

The advancements in the successful development of messenger RNA-based vaccines hold promise for other diseases ranging from several types of cancer to autoimmune disorders to the seasonal influenza. The momentum has propelled a flurry of biopharmaceutical companies to invest in mRNA vaccine research and development, including France’s Sanofi, U.S.-headquartered Merck, Israel’s Gilead Sciences, and California-based Arcturus Therapeutics Holdings alongside the pioneering BioTech and Moderna.

Global distribution of COVID-19 vaccines, in addition to further research and development of new vaccines for other illnesses, may be hindered by supply chain disruptions and vaccine ingredient bottlenecks prompted and exacerbated by the pandemic.

Today is Tuesday, August 24, 2021, and here is today’s essential intelligence.

Economic Research: How U.S. Infrastructure Investment Would Boost Jobs, Productivity, And The Economy

As the U.S. economy recovers, the Biden Administration is looking to further strengthen the recovery with an infrastructure funding bill. S&P Global Ratings updated its projections on what impact a $1 trillion investment in infrastructure would have on the economy through 2030. S&P Global Ratings estimates that, in real dollar terms, the project will create more in economic activity than it would cost. In particular, it estimates that a $1 trillion investment in infrastructure would add $1.4 trillion to the economy over an eight-year period--a fiscal multiplier of 1.4x. In terms of jobs, S&P Global Ratings found that the infrastructure project would create 883,600 jobs by 2030--many middle-class jobs. And per capita income would be $100.50 (10.5%) larger than in the no infrastructure scenario. Private-sector productivity would also get a boost from the infrastructure investment--by around 10 basis points, on average, each year. That productivity boost would likely lift average GDP growth on an annual basis to 2.1% from around 2.0% over the period.

If the equity market’s report card so far in 2021 is any indication, it’s on track to be another stellar year. Through Aug. 19, 2021, the S&P 500® is up 17%. The gains were achieved steadily; apart from January, the benchmark has been up every month in 2021. Predictably, in such an environment the S&P 500 Low Volatility Index has lagged, up 14% through close of Aug. 19, 2021. Volatility declined slightly in most sectors of the S&P 500. Even Energy was less volatile compared to three months prior.

Demystifying Digital Assets: Getting to Know the S&P Cryptocurrency Indices

How are indices helping bring greater transparency to this emerging asset class? S&P DJI’s Tyler Carter and Ved Malla explore the design and objectives of new tools for tracking and evaluating digital currencies.

Second-quarter trading revenue at France-based Société Générale SA and Natixis SA grew year over year while that of other leading global investment banks fell, as fixed income, currencies and commodities trading continued to slow down. Most of the 13 global investment banks tracked by S&P Global Market Intelligence posted revenue drops, both on a yearly and on a quarterly basis, with FICC being the key drag. Equities sales and trading revenue at most banks grew year over year, but they were weaker than during the first quarter.

Confidence in the Irish banking sector is building among investors, despite the recent European Banking Authority's recent stress test suggesting it would be one of the weakest performers in the European Economic Area through 2023, according to analysts.

HDFC Bank Ltd. is confident it can reverse the slide in its credit cards business after the nation's central bank lifted an eight-month freeze on acquiring new customers. HDFC Bank aims to add 500,000 new credit cards per month from February 2022 to "regain its market share and cement its leadership position," according to an Aug. 23 press release. But the nation's biggest private-sector lender still has some convincing to do before it is allowed to launch any new digital initiatives. 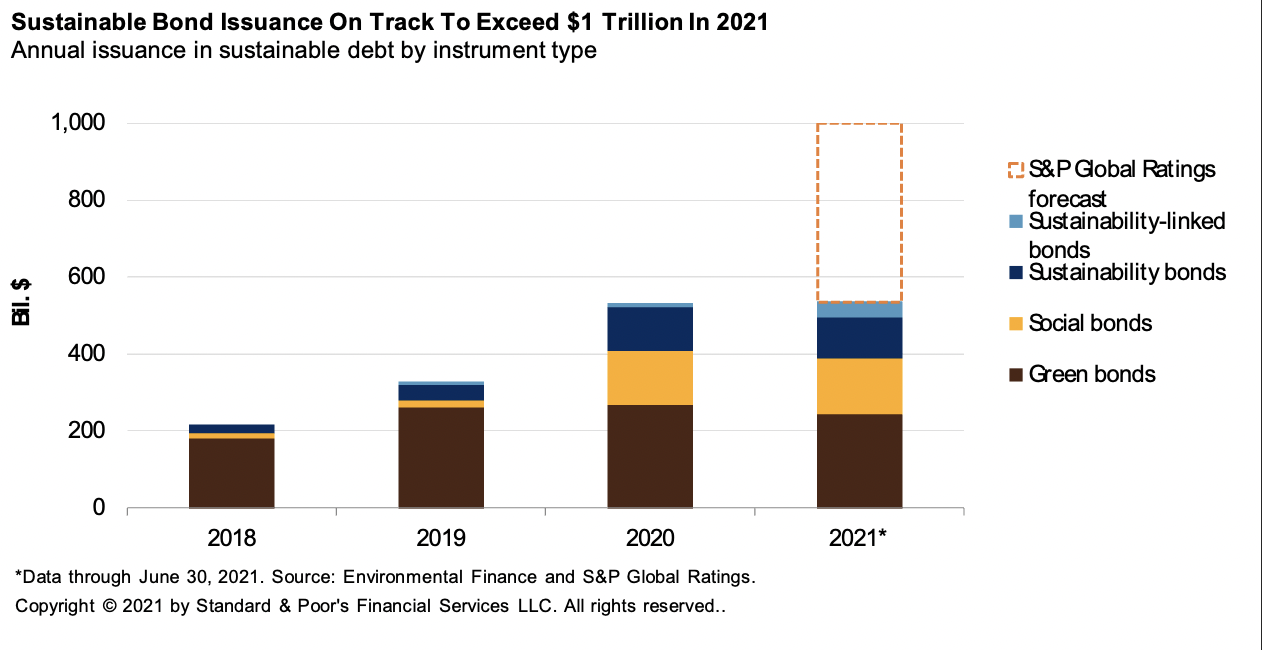 S&P Global believes sustainable bond issuance including green, social, sustainability, and sustainability-linked bonds could now collectively exceed $1 trillion in 2021. However, a lack of consistency in instrument labelling and post-issuance disclosure has raised investor fears that sustainability claims made by issuers might be overstated or unreliable, also known as greenwashed. In addition to greenwashing, "sustainability-washing" concerns have become increasingly prominent as new types of sustainable financing including social, transition, and sustainability-linked instruments take root. While there are increasing concerns that these potentially misleading practices are taking place, there seems to be little evidence that they have become widespread in reality. Regulations and principles could help mitigate environmental, social, and governance (ESG) washing risks, but the road to harmonization is long and winding.

The European Commission's 2030 renewable hydrogen targets will require huge amounts of renewable power generation, amounting to around half the EU's total renewables generation in 2019, according to data from S&P Global Platts Analytics.

Global crude and condensate demand would peak in four years and slump by 40% over the next three decades if the world moves to a path outlined by the UN's Intergovernmental Panel on Climate Change, or IPCC, where global warming is limited to 1.5 C or 2 C degrees, according to S&P Global Platts Analytics. Noting the IPCC's recent report on global warming, S&P Global Platts Analytics said a scenario in which warming is limited at 2 C would see crude and condensate demand collapsing to 50 million b/d in 2050, down from around 99 million b/d expected in 2021, after peaking at 104.5 million b/d in 2015.

President Joe Biden took a strong stance against fossil fuels right away, essentially canceling the long-simmering Keystone XK Pipeline and implementing a moratorium on all new oil and gas lease sales on federal lands and waters. Since then though, his administration has refused to oppose other key crude oil pipeline projects, such as the expansion of the Dakota Access Pipeline and the nearly completed Line 3 replacement pipeline from Canada. Also, while his campaign promised to cancel new oil and gas permits on federal lands, those permits have kept flowing during the ongoing leasing moratorium that's currently being fought in courts. Supporters say he's taking a balanced approach for a country that still needs oil and gas as it transitions toward more renewables, while critics have called his administration hypocritical or, at best, intentionally inconsistent. Energy law professor James Coleman joins S&P Global Platts senior editor Jordan Blum to discuss the many legal and policy issues at play under the new administration.

During a speech, President Ebrahim Raisi said one of his priorities will be to export more added-value refined oil products. Iran produced 2.52 million b/d in July, its highest since April 2019, according to the latest S&P Global Platts survey.

Iran has resumed fuel exports to Afghanistan after the situation stabilized following a military takeover of the country by the Taliban, a spokesman of Iran's oil products exports guild, Hamid Hosseini, told S&P Global Platts. In recent months, Iranian fuel exports to Afghanistan have been minimal due to increased domestic consumption in Iran and refinery maintenance work, Hosseini said.

This closure of the ports along the US Atlantic Coast from New York Harbor north to Massachusetts is expected to slow some waterborne shipments of gasoline and diesel supply to regional terminals. Gasoline demand, meanwhile, ticked higher over the weekend as mandatory evacuation orders for low-lying areas including popular beach communities up and down the coast forced residents to move inland.