What’s LNG Got To Do With It?

Will liquified natural gas be the bridge that connects Europe with an energy supply secured without Russian imports, alongside its energy transition ambitions?

The European Union’s dependency on gas imports—90% of its supply, of which approximately 40% comes from Russia—has sent prices spiraling since Russia began its invasion of Ukraine. Despite the bloc’s plans to reduce its reliance on Russia for gas by two-thirds and maintain minimum gas storage obligations by year-end, immediate ambitions to diversify its energy imports are difficult. That hasn’t stopped the EU from seeking LNG supplies from new trading partnerships.

Liquified natural gas (or LNG) has emerged as a key source of flexibility for the European market as the Russia-Ukraine conflict continues to cast a shadow of uncertainty over the future of Europe’s energy security and push energy prices to historic highs, according to S&P Global Commodity Insights. Markets will be watching how Europe's new role in the global LNG markets shapes up, how regasification capacity constraints on the continent are addressed, and how the challenges of relying on LNG to move away from Russian pipeline gas play out in the years ahead.

“The EU has greater near-term potential to ramp up its LNG imports, considering its ample access to spare regasification capacity,” the International Energy Agency said in a plan outlining how the EU’s can reduce its reliance on Russian natural gas published last month. “The EU could theoretically increase near-term LNG inflows by some 60 billion cubic meters, compared with the average levels in 2021. However, all importers are fishing in the same pool for supply, so … this would mean exceptionally tight LNG markets and very high prices. Considering current forward prices and the LNG supply-demand balance, we have factored into our 10-Point Plan a 20 billion cubic meter increase in the EU’s LNG imports over the next year.”

The EU is targeting as much as 50 billion additional cubic meters of LNG cargoes in the coming year, which would account for roughly half of its dependence on Russian gas. S&P Global Ratings believes that the EU’s efforts to secure alternative gas supplies and energy policy calls for more LNG could reshape Europe's energy market.

The EU and U.S. announced a “joint game plan” on March 25 to provide at least 15 billion cubic meters of LNG this year, and for EU member states to work "toward ensuring stable demand" for about 50 billion cubic meters additional U.S. LNG per year until at least 2030. The U.S. exported 21.7 billion cubic meters to EU countries in 2021, and France was the top destination for U.S. LNG cargoes this March, according to S&P Global Commodity Insights data. Now, U.S. LNG developers are preparing for the potential of a new wave of export projects.

"In the near term, increased European LNG demand will result in higher prices and demand destruction in Asia to balance the market through higher prices,” Neil Beveridge, an analyst at the brokerage firm Sanford C. Bernstein, told S&P Global Market Intelligence of the how the U.S.-EU LNG agreement marked a "paradigm shift" for U.S. natural gas producers and LNG terminal operators. "This is good for upstream LNG suppliers and bad for downstream gas utilities in Europe and Asia.”

But big changes are unlikely anytime soon, putting the onus on long-term LNG contracts to secure Europe’s future energy supply. "You are several years from being able to produce a lot more LNG," Jason Feer, head of business intelligence at the energy and shipping brokerage Poten & Partners, told S&P Global Market Intelligence in an interview this week. "That's just the hard, cold fact."

Changes to the natural gas market in Europe could also alter the interconnected dynamics of the global energy market as countries begin to seriously engage with their net-zero plans and transitions from fossil fuels to renewable sources. Some experts believe that the conflict’s increase in European natural gas and power prices could create a medium-term manufacturing advantage in the U.S., with complications for the energy transition in the longer-term as investors looking to move away from the oil and gas sector are tested. Overall, Western Europe's "gas bridge" to the energy transition is at risk of collapse, according to S&P Global Commodity Insights.

"Europe needs more U.S. LNG to get through the next two winters, not incentivization to use gas for the next 20 years," Claire Healy, head of climate at the think tank E3G's Washington's office, told S&P Global Commodity Insights. "It has turned a short-term energy crunch into a long-term crutch for American oil and gas producers."

Today is Wednesday, April 6, 2022, and here is today’s essential intelligence.

Housing Overvaluation Trend Continues: What It Means For U.S. RMBS 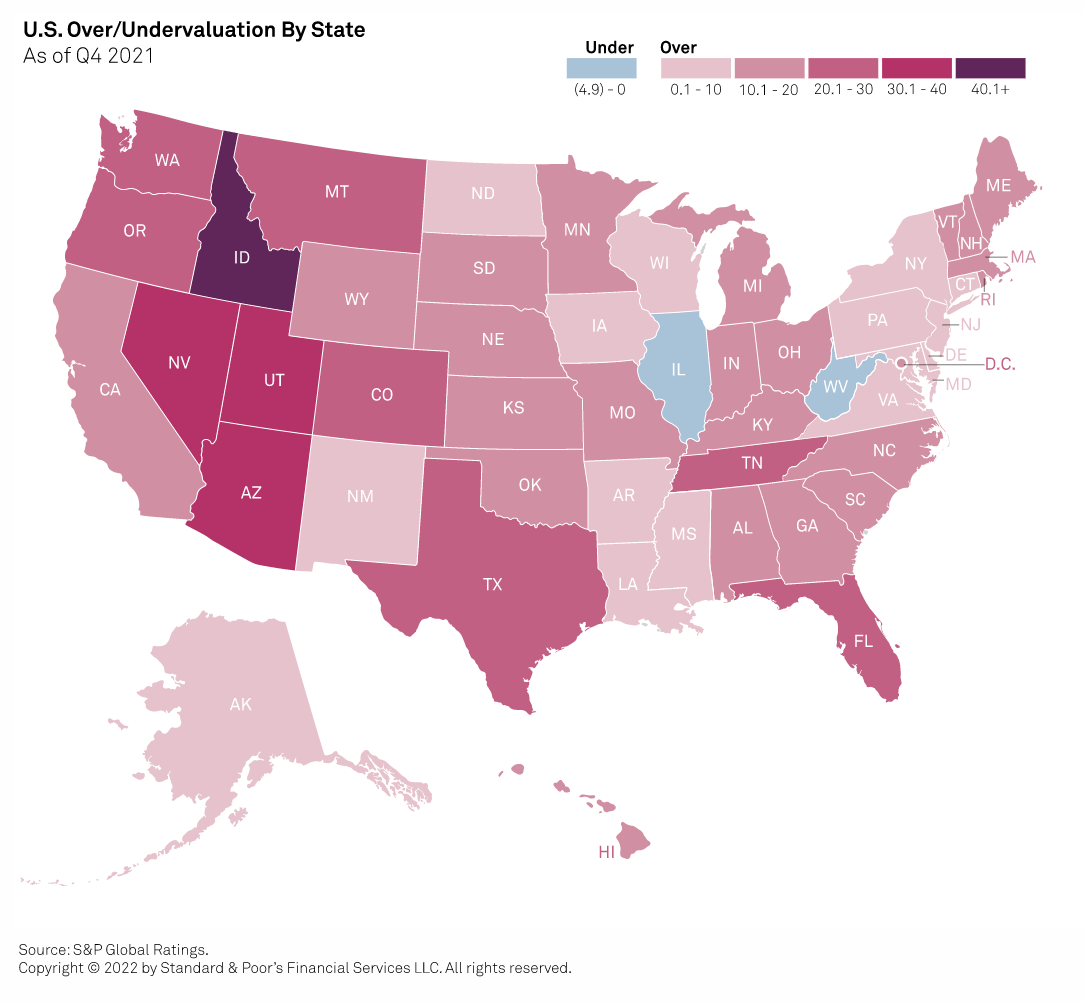 U.S. home prices climbed to new highs in 2021, primarily due to low interest rates, supply-demand imbalances, and pandemic effects, such as remote work and school and the desire for more living space. Certain regions saw substantial home price appreciation (HPA), with cities such as Austin, Boise, and Phoenix experiencing annual price gains of roughly 30%. Although some price-driving factors reverted to pre-pandemic norms in 2021, population dynamics continued as 30 of the 50 U.S. states experienced net migration-related population changes, according to the 2021 Atlas Van Lines Migration Patterns Study. While housing-related macroeconomic and lifestyle factors continue to support HPA, income growth has generally failed to keep up. As a result of these factors and their impact on the affordability metric S&P Global Ratings considers in its over/undervaluation analysis, it now views U.S. home prices as approximately 15% overvalued in aggregate.

The confluence of the Russia-Ukraine military conflict, nagging inflation and the prospects for higher interest rates, and the lingering pandemic mark a turn in the positive credit momentum of the past 14 months. But while downgrades are now outpacing upgrades, ratings remain resilient overall, and pressure is mounting unevenly. The effects of the Russia-Ukraine conflict on global economic and credit conditions are becoming more pronounced; widening spreads in major markets suggest investors are growing somewhat more risk-averse. Defaults look set to rise from historically low levels and could exceed our baseline forecasts (for 3% in the U.S. and 2.5% in Europe) by December. 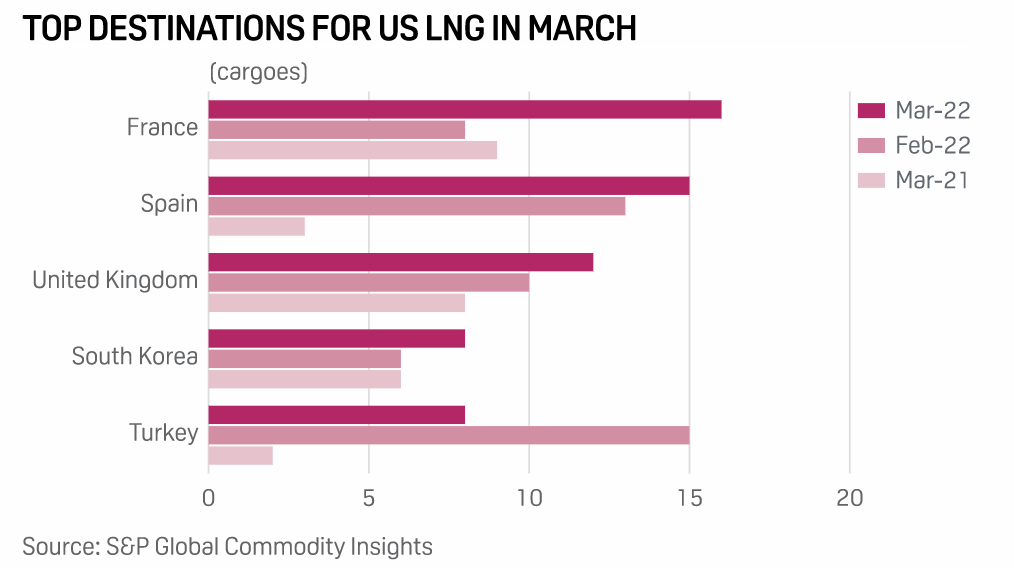 France was the top destination for U.S. LNG cargoes in March as Europe began refilling storage after inventories bottomed out and as Russia's war in Ukraine raised fears of pipeline gas disruptions. Spain was a close second, followed by the U.K., an April 4 analysis of trade flow data by S&P Global Commodity Insights showed. Russia's threat to cut off gas to countries that have sanctioned it over its invasion of Ukraine, if they refuse to pay in rubles, has caused concern about security of supplies. Western countries have insisted that they will continue to pay for Russian gas in euros or dollars. About 75% of all U.S. LNG cargoes delivered in March landed in Europe and Turkey, compared with about 44% of U.S. LNG cargoes landing in Europe during the same month a year earlier.

Climate Disclosures Are Increasing In The U.S. But Still Far From What The SEC Has Proposed 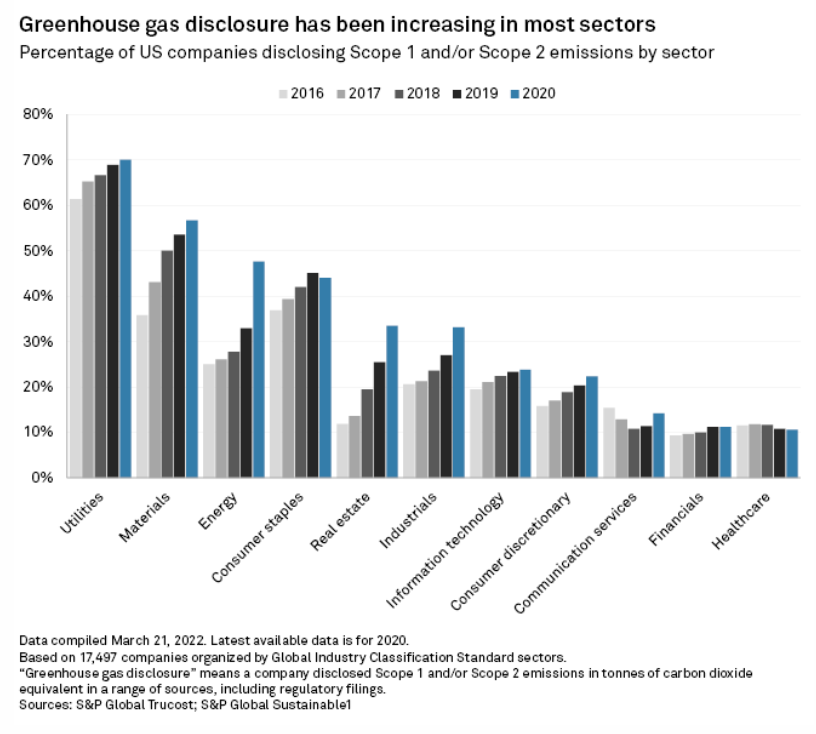 A proposed U.S. Securities and Exchange Commission rule would require companies registered under its mandate to disclose certain climate-related information and, in some cases, have a third-party attestation report. Corporate disclosure of greenhouse gas emissions is increasing in the U.S. but remains uncommon in all but a few sectors. Currently, few U.S. companies appear to have third-party verification of their Scope 1 and Scope 2 emissions. Most existing corporate climate disclosures globally are not aligned with the recommendations of the Task Force on Climate-related Financial Disclosures, or TCFD. The SEC said it drew from the TCFD framework for its proposal. 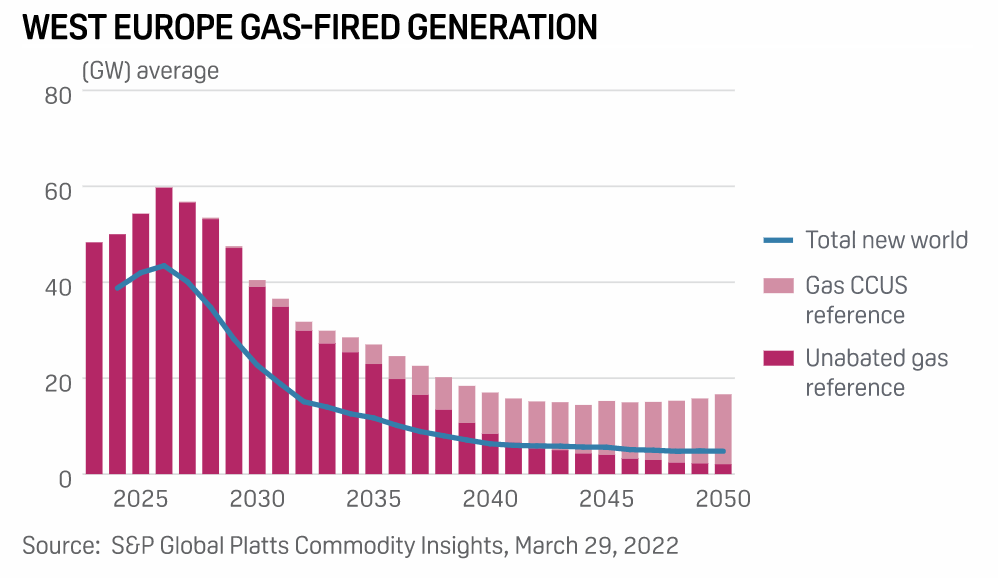 Western Europe's "gas bridge" to the energy transition is at risk of collapse, S&P Global Commodity Insights said in its latest long-term European electricity forecast. Renewed political will to disengage from Russian gas implies high gas prices for the remainder of the 2020s, leading to a swifter-than-expected decline in the bloc's gas-fired generation capacity, the report said. Under a New World Case reflecting today's market and geopolitical turmoil, S&P Global assumes unabated gas capacity across Western Europe falls by over 25% by 2030 and around 50% by 2035, while gas-fired generation falls by 60% by 2030 and 80% by 2035 versus 2021 levels.

While Next in Tech has discussed the uses of data, there are complex issues around securing it, especially with more remote work. Security analyst Justin Lam joins host Eric Hanselman to look into changing approaches that can address the fluidity of data in modern applications. The scale of data volume growth is straining traditional approaches. Organizations are wrestling with declining storage costs that tempt them to retain everything, but a better path might be to learn how to let data go.