Russia said it will stop supplying natural gas to Poland and Bulgaria—a move that heightens risks to Europe’s overall energy security and tensions with the West.

After both European nations refused to settle their payments in rubles, Poland's state-controlled oil and gas company PGNiG and Bulgaria’s natural gas distribution company Bulgargaz said they received notice yesterday from Russia’s Gazprom that all natural gas supplies will be suspended starting today, according to S&P Global Commodity Insights. Russian President Vladimir Putin began requiring on March 31 all EU buyers purchasing Russian gas to pay in rubles through a newly established currency-conversion mechanism, or risk supplies being suspended. The European Commission advised member states on April 22 to ask their Russian counterparts to honor their existing contractual obligations, and deposit their due payments in euros or dollars to remain compliant with sanctions. EC President Ursula von der Leyen warned today that Russia’s demands for payments in rubles creates a “high risk” for EU companies.

PGNiG and Bulgargaz believe that Gazprom’s deliveries suspension is a breach of their long-term contracts, and that they could account for the lost supplies with alternative arrangements. But Russia’s decision to stop supplying gas to parts of Europe raises questions about how the EU will ensure its energy stability and security—and how the West will respond to Russian aggression on the international stage as it wages its war in Ukraine.

“The announcement by Gazprom that it is unilaterally stopping delivery of gas to customers in Europe is yet another attempt by Russia to use gas as an instrument of blackmail. This is unjustified and unacceptable. And it shows once again the unreliability of Russia as a gas supplier,” EC President von der Leyen said in a statement today. “We are prepared for this scenario. We are in close contact with all Member States. We have been working to ensure alternative deliveries and the best possible storage levels across the EU.”

Russia is the world’s largest natural gas exporter and supplies the EU with approximately 40% of its supply. While the bloc has made clear its ambitions to reduce European demand for Russian gas by two-thirds before year-end, the EU still needs Russian gas and is likely to find it impossible to eradicate its reliance in the near-term. Natural gas prices in Europe surged on the news of Gazprom’s supply suspension. S&P Global Ratings believes that the EC’s proposal to curb Russian oil and gas imports alone could bring consequential market implications—leading to even more elevated gas and power prices, increasing the risk of gas shortages, and prompting a decline of the bloc’s gas utilities sector.

If the threats to cease supplies to Poland and Bulgaria are any indication, the prospect that Russia could plug the pipelines on all natural gas supplies to Europe is no longer inconceivable, and the possible ripple effects could be disastrous.

Meanwhile, Gazprom announced last week that it plans to fill its domestic natural gas storage sites at an all-time high storage volume ahead of the winter.

"With our G7 partners, we have clearly expressed our position: agreed contracts must be respected … 97% of the relevant contracts explicitly stipulate payment in euros or dollars. Companies with such contracts should not accede to Russian demands," an EC spokesperson told S&P Global Commodity Insights on April 22, prior to Gazprom’s suspension notices, when the EC provided guidance to the bloc’s member states on how to pay for Russian gas without breaching EU law according to Moscow’s ruble conversion decree. "The EU will continue to respond in a united manner to this latest attempt by Russia to circumvent our sanctions."

Russia had previously warned that it “remains a reliable supplier, a world-class guarantor of energy security. We value this reputation, but are ready for a harsh confrontation in the energy sector, if the need arises," Nikolai Kobrinets, director of European cooperation in Russia's foreign ministry, said in a March 12 interview with Interfax, according to S&P Global Commodity Insights. "The European Union would not definitely profit from it, because we have a greater safety margin and stronger nerves."

Today is Wednesday, April 27, 2022, and here is today’s essential intelligence.

Although Brazilian States Are Flush With Cash, Spending Pressures Are Mounting 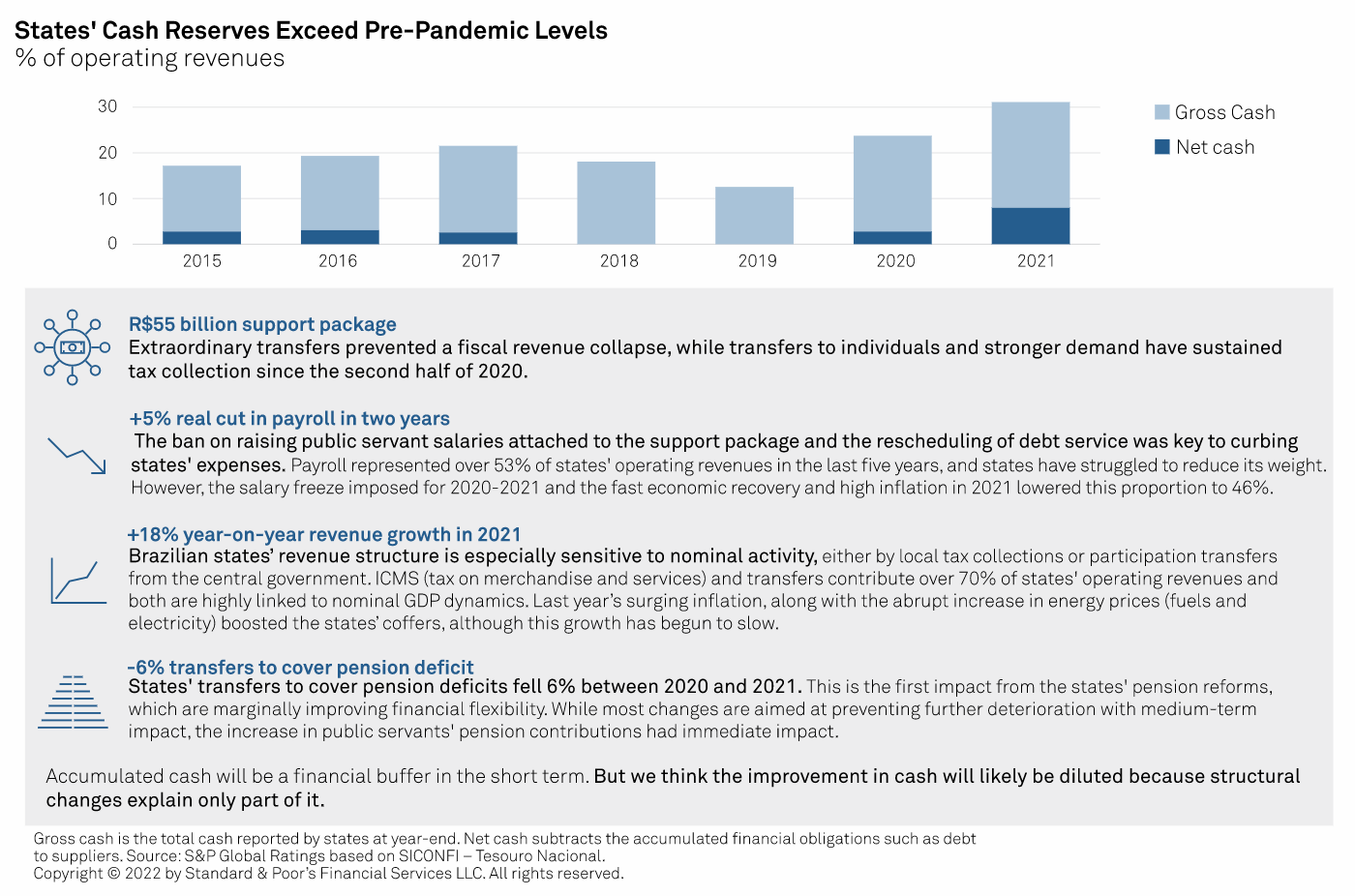 Following the sizable support package received in 2020, the two-year public payroll freeze, and the revenue windfall in 2021, Brazilian states started 2022 with large cash reserves. However, decelerating revenue growth and high pressure to raise payroll and infrastructure spending following the pandemic will test liquidity resiliency. In S&P Global Ratings' opinion, strategic liquidity planning will be crucial amid limited access to borrowing sources, which has become stricter recently in an effort to promote states' fiscal sustainability.

'It Has Been A Wild Ride,' Hycroft Mining CEO Says In Wake Of AMC Investment 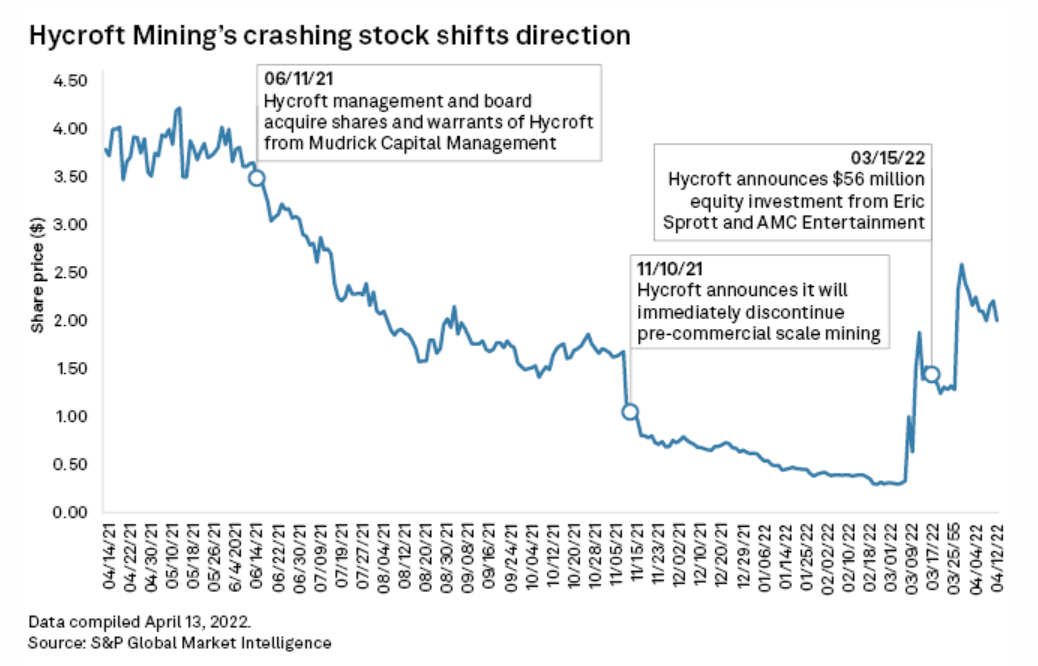 After nearing bankruptcy in early March, Hycroft Mining Holding Corp. has been riding a wave of retail investor interest and a major influx of cash from AMC Entertainment Holdings Inc. and mining investor Eric Sprott to turn its fortunes around. Investors long hoped the mining company could extract the precious metals from the vast resources at its namesake Hycroft gold-silver property in Nevada, but a proprietary leaching process turned out to be uneconomic, pushing the company to the brink of bankruptcy. 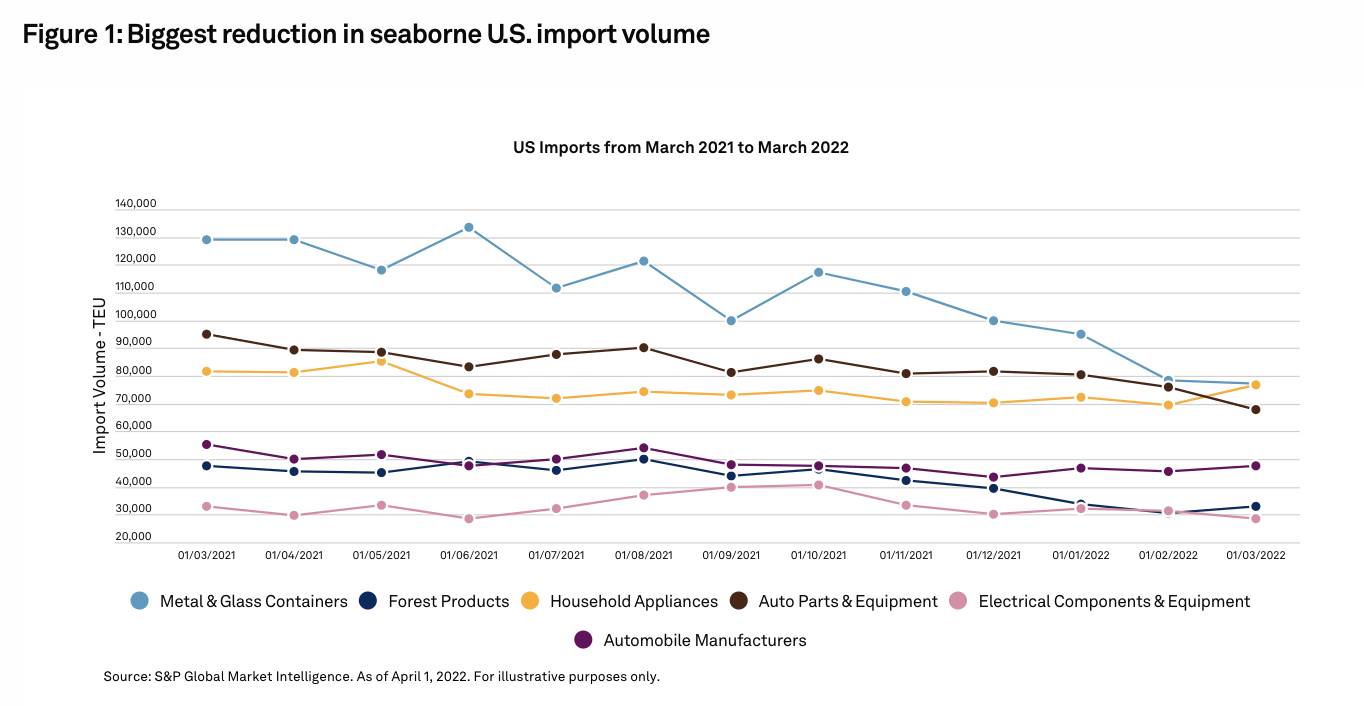 In recent times, inefficiently functioning supply chains have come under increasing scrutiny, with risks amplified during the height of the COVID-19 outbreak when companies struggled to balance supply constraints with changing consumer demand. Despite easing COVID-19 restrictions across the globe, supply chains struggle to return to pre-pandemic levels. The Russia-Ukraine conflict, shortage of critical components, rising energy and commodity prices, the Omicron variant-related lockdowns in multiple Chinese cities, and a host of other issues have placed renewed pressure on the flow of goods. 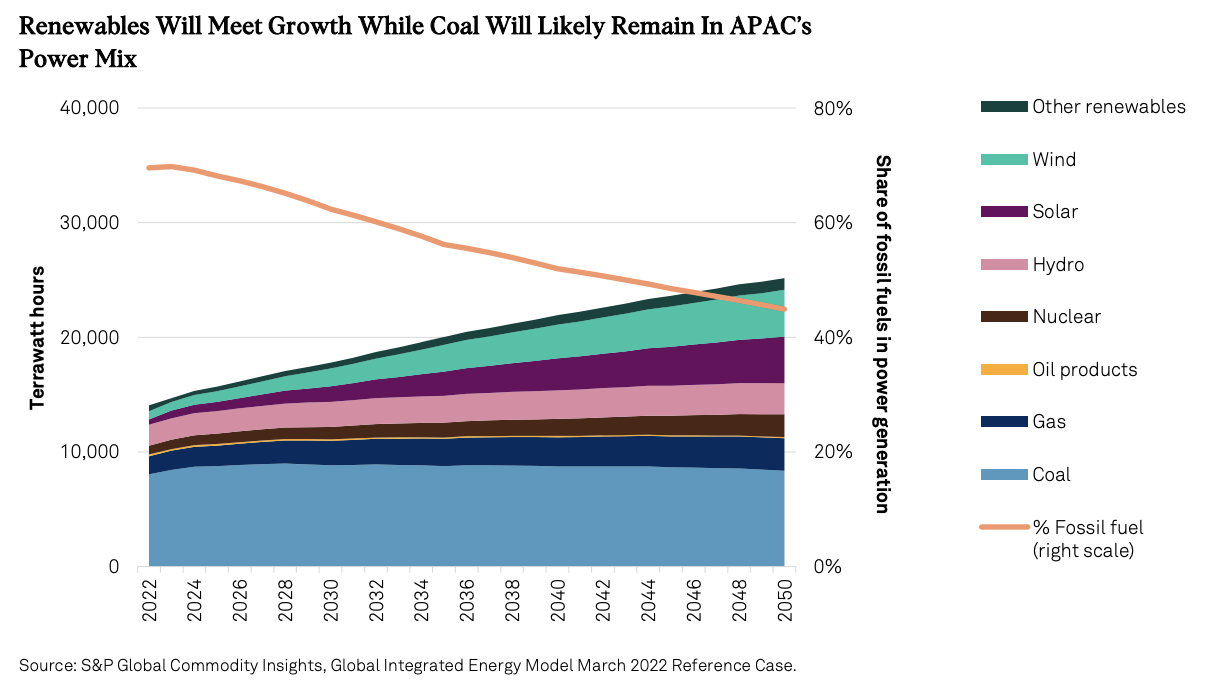 Asia-Pacific's energy transition will be an uphill journey. One full of twists and turns—and that's just the beginning. By global standards, the region faces considerable roadblocks as it moves to renewable and stable forms of energy. Reliance on fossil fuel-based generation remains close to 70% and demand for power is growing, with significant investment needs. The stage may be set for action, but each country will reach the summit at its own pace. To get there will require enabling policies and a reprieve in the high cost of technological solutions. 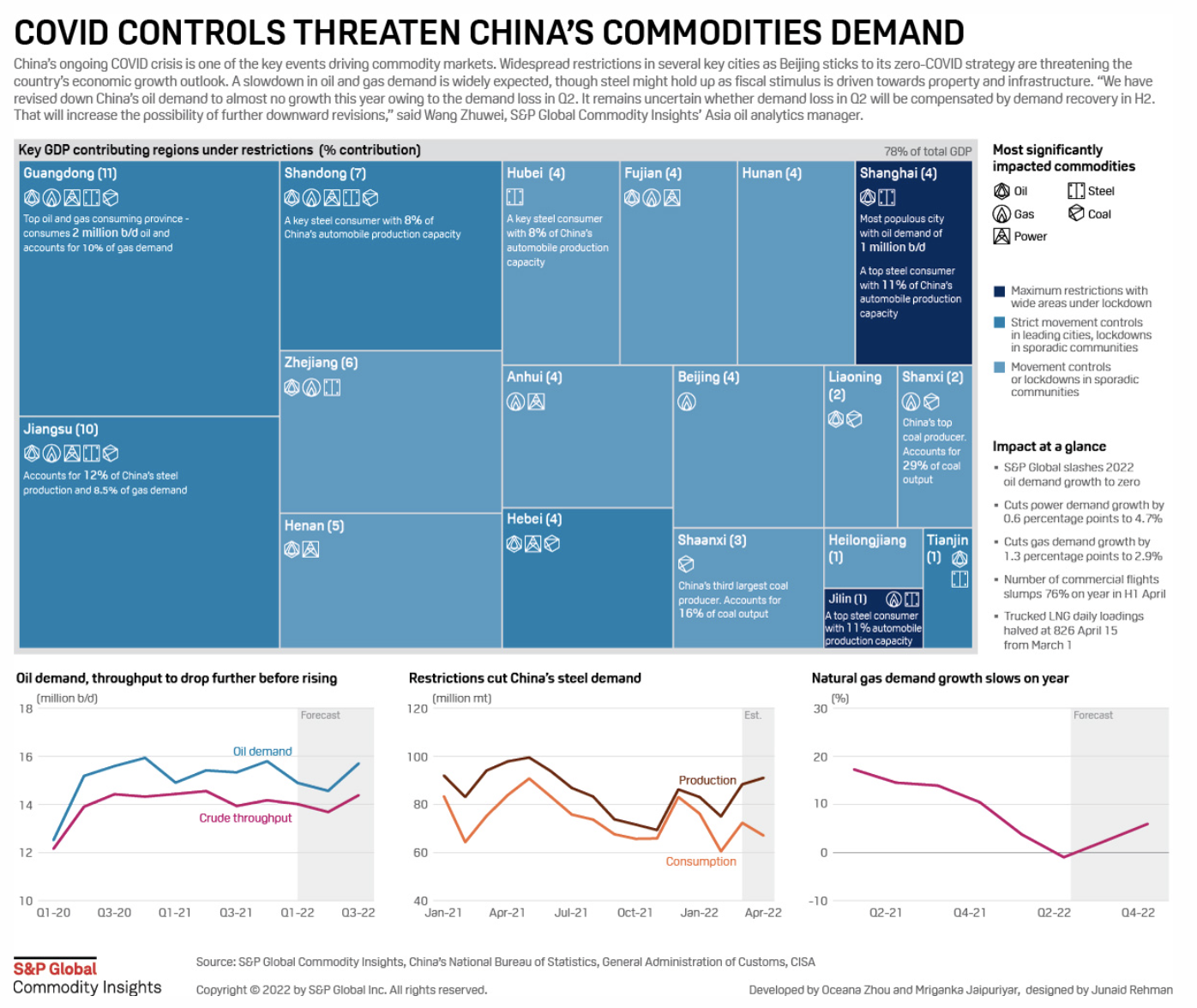 China's ongoing COVID crisis is one of the key events driving commodity markets. Widespread restrictions in several key cities as Beijing sticks to its zero-COVID strategy are threatening the country's economic growth outlook. A slowdown in oil and gas demand is widely expected, though steel might hold up as fiscal stimulus is driven towards property and infrastructure. "We have revised down China's oil demand to almost no growth this year owing to the demand loss in Q2. It remains uncertain whether demand loss in Q2 will be compensated by demand recovery in H2. That will increase the possibility of further downward revisions," said Wang Zhuwei, S&P Global Commodity Insights' Asia oil analytics manager.

Next in Tech talks a lot about theoretical aspects of ML/IA, but this episode brings in Giorgio Baldassarri and Kieran Shand from S&P Global’s Credit Modeling and DMS teams to talk about the practical aspects of Machine Learning (ML) implementations with host Eric Hanselman. They are tackling a complex problem in tracking credit risk and building ML models to identify higher-risk credit instruments. It’s a situation where the data can be incomplete and, in a regulated industry, model explainability is key.