In accepting Tesla CEO Elon Musk’s $44 billion all-cash, go-private takeover bid for Twitter, the social media behemoth’s board of directors is shepherding one of the largest leveraged buyouts of a publicly traded company.

The world’s richest person is offering a $21 billion equity commitment and secured $25.5 billion in debt and margin loan financing to fund the deal. The offer forced the company’s board into negotiations despite attempts to delay Mr. Musk’s ability to establish a significant holding. When the proposed transaction closes—subject to regulatory and shareholder approval but likely in 2022—Twitter shareholders will receive $54.20 in cash for each share of common stock owned. That represents a 38% premium to the company's April 1 closing stock price on the last day of trading before Mr. Musk disclosed his 9.2% stake, of 73.5 million shares, on April 4, according to S&P Global Market Intelligence. Twitter will become a private company upon the deal’s closing.

Twitter will be acquired by an entity wholly owned by Mr. Musk, who has one of the largest followings on the social media platform while also being one of its most vociferous critics.

Market participants will be watching to see what Mr. Musk will do to realize his controversial plans to “make Twitter better than ever by enhancing the product with new features, making the algorithms open source to increase trust, defeating the spam bots, and authenticating all humans” for the platform that he described as “the digital town square where matters vital to the future of humanity are debated.”

Twitter has faced increasingly intense scrutiny from regulators over how the social media company both recommends and moderates content on its platform.

Analysts interviewed by S&P Global Market Intelligence shared mixed views on whether he has the right temperament to lead in the tech space. Mr. Musk’s takeover comes less than six months after Twitter founder Jack Dorsey confirmed his resignation as chief executive from the company and named Parag Agrawal as his successor.

"Twitter is not known for a culture of innovation," Brenon Daly, an analyst at 451 Research, part of S&P Global Market Intelligence, said. "That's in direct conflict with Elon Musk ... who thrives on contentious innovation. There's a strong dynamic—by confronting people and by pushing and pushing and pushing, he can get what he wants. That does not play well in the tech industry.”

Twitter will release its first-quarter earnings results this week, on April 28 before the market opens—but said it won’t hold a corresponding investor call.

“Although VIX rose north of 30 at the open, the S&P 500 found its footing later in the session and bucked a prior three-day losing streak to close up 1% on the day” yesterday following the announcement of the deal, S&P Dow Jones Indices Director of Index Investment Strategy Benedek Vörös said in a market note this morning. “Continuing the reversal theme, year-to-date laggard Communication Services led with a gain of 2%, in part thanks to a 6% gain in buyout target Twitter.”

Today is Tuesday, April 26, 2022, and here is today’s essential intelligence. 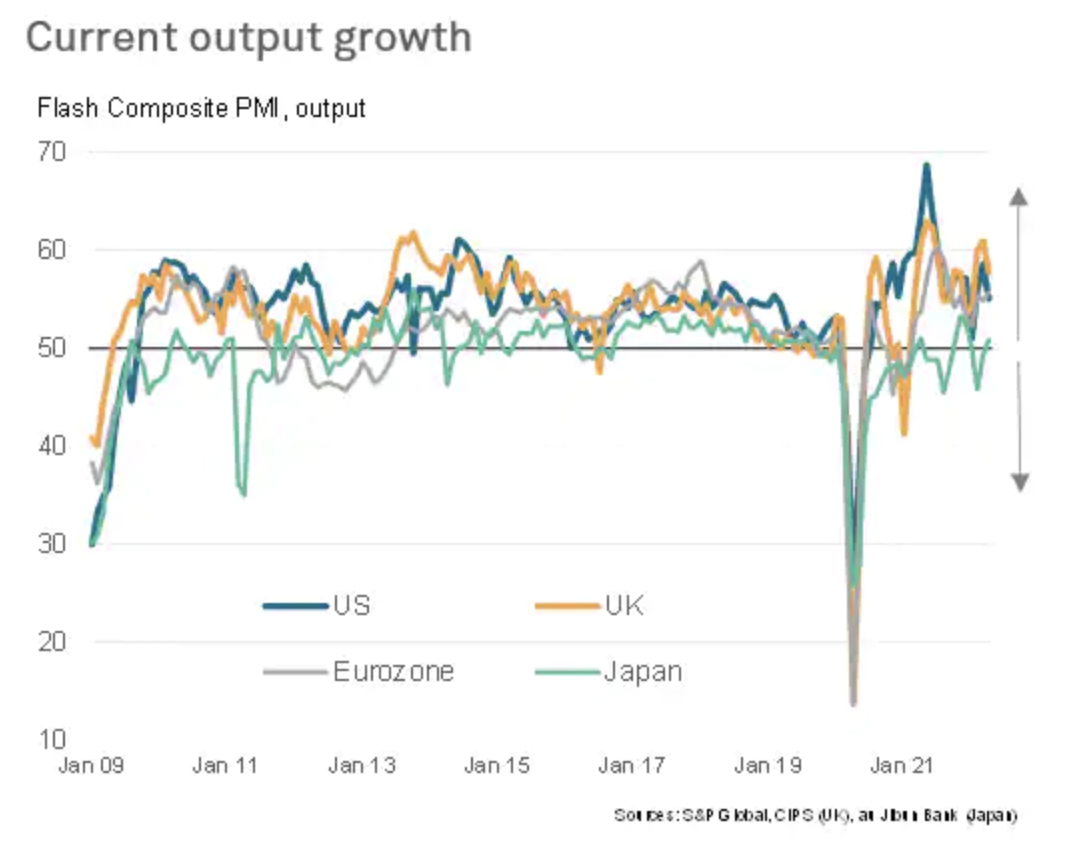 Preliminary PMI survey data showed economic growth slowing in the U.S. and U.K. as strong pandemic rebounds showed signs of fading. In contrast, a reopening of economies in the eurozone and Japan helped drive improvements, helping to offset weakened manufacturing performances arising from fresh supply delays. Shortages of inputs were linked to the Ukraine war and lockdowns in mainland China. A fall in backlogs of work in the U.K. meanwhile suggests the U.K. could underperform the U.S. and eurozone in coming months as pent-up demand is depleted. However, in all four of the largest developed countries, future output expectations have slumped far lower than seen earlier in the year, attributable to increasing concerns about future economic growth amid the Ukraine war, policy tightening, and the rising cost of living.

European banks operating in Russia have to decide between two unappealing options—either make a hurried and probably costly exit that leaves international clients stranded, or stay put and deal with the complexities of international sanctions as well as the risk of a backlash at home. Société Générale leads five banks rapidly exiting Russia, with the French lender saying it will take a loss of about €3.1 billion on the planned sale of its local unit. By contrast, its two biggest overseas rivals in Russia, UniCredit and Raiffeisen Bank International AG, are remaining for now, even amid international protests, following President Vladimir Putin's invasion of Ukraine. 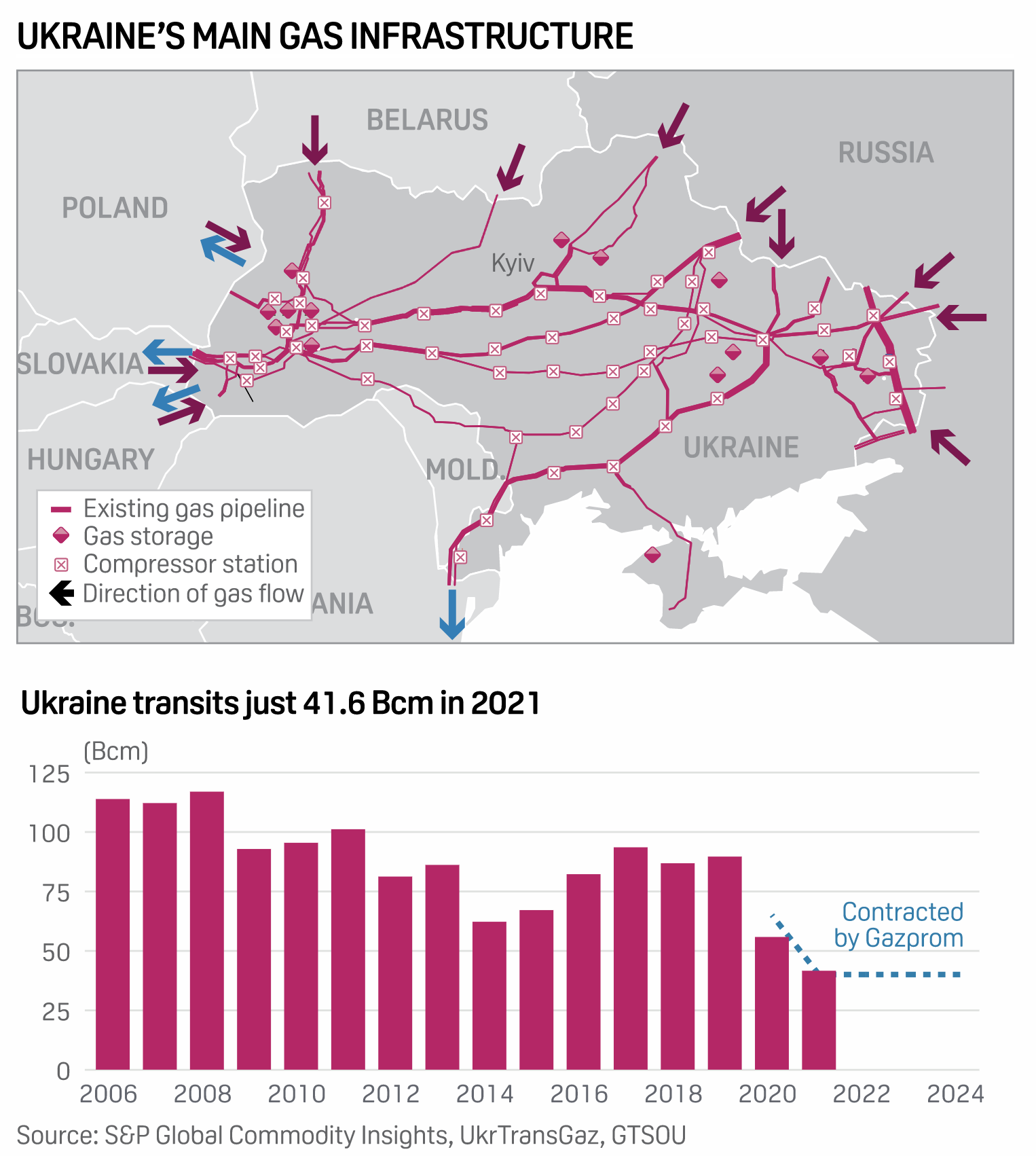 The head of Ukraine's state-owned Naftogaz Ukrayiny has warned that disruption to operations at Ukrainian compressor stations in areas occupied by Moscow could lead to the loss of one third of Russian gas transit volumes to Europe. Writing on Twitter April 23, Naftogaz CEO Yuriy Vitrenko also called for payments for Russian gas by European buyers to be paid into escrow accounts. "We estimate that one third of the gas volume exported from Russia to the EU through Ukraine will be lost if the occupation forces do not stop disrupting the operation of our stations in recently occupied territories," Vitrenko said. 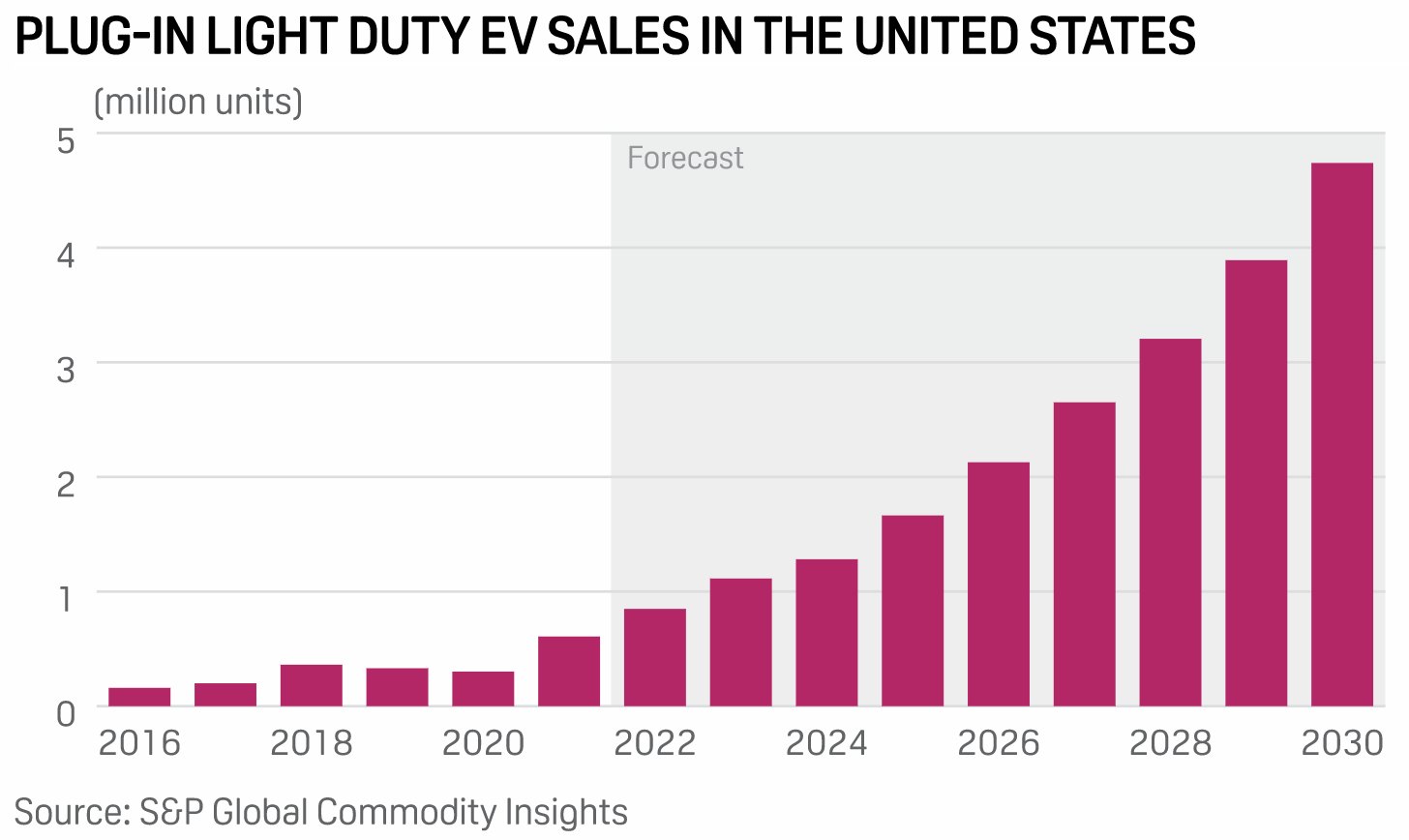 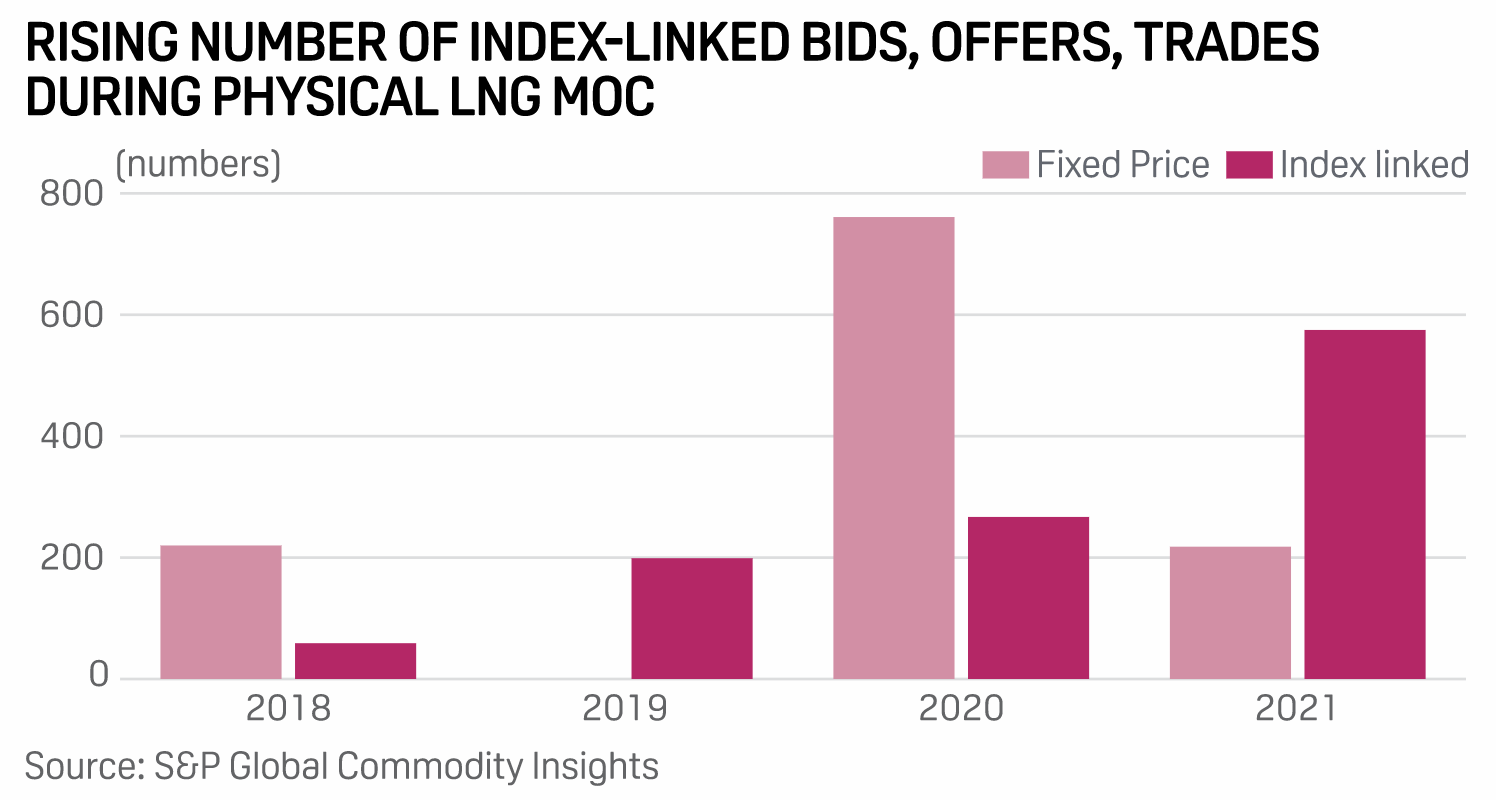 Spot trading activity in the Asia-Pacific LNG market slowed down sharply in the January-March quarter, as global events such as the Russia-Ukraine war, earthquake in Japan, and pipeline gas shortage in Europe drove market volatility and lifted prices, market sources said. The first three months of 2022 marked the highest LNG monthly average spot prices in Asia due to strong demand from Japan, supply cuts in Malaysia and Australia, and firm prices in the Atlantic. The Platts JKM monthly average prices for January, February, and March 2022 delivery were assessed at $35.87/MMBtu, $32.845/MMBtu, and $24.815/MMBtu, respectively, S&P Global Commodity Insights data showed.

Listen: Drop More SBOMs: How The Energy Industry Can Tighten Up Cybersecurity

The energy sector has found itself in the crosshairs of what's been called a rare and dangerous state-sponsored malware threat capable of disruption, sabotage, and potentially physical destruction of energy assets, with LNG and electric facilities believed to be the initial target. Schneider Electric Vice President and Deputy Product Security Officer Cassie Crossley joined the Capitol Crude podcast to discuss the risks vendors introduce to oil and gas operators, the cyber defenses available to the sector and how a software bill of materials development and use could aid the oil and gas industry. Senior editor Jasmin Melvin also asked her about the new malware threat to the energy sector and Schneider Electric's efforts to thwart it.