What Netflix’s Struggles May Mean For The Market

Because Netflix has had difficulties sustaining growth, the company’s first quarter subscriber performance pointed to a shift in Netflix's scale from the massive subscriber numbers accrued during the pandemic—and raises questions about how other technology and streaming giants may navigate complex current conditions.

Netflix’s global streaming paid memberships fell to 221.64 million in the first quarter, from 221.84 million in the previous quarter—marking the first time that Netflix has ever lost subscribers. In its first-quarter earnings on April 19, Netflix reported that ending its operations in Russia resulted in the loss of 700,000 paid memberships in the country, cited revenue growth headwinds from increased competition and account sharing among households, and warned that the second quarter could see 2 million additional subscriber losses.

"I know it's disappointing for investors, and it is for sure," CEO Reed Hastings said on a April 19 earnings interview, according to S&P Global Market Intelligence. "This is when it all matters, and we're super focused on ... getting back into our investors' good graces."

Netflix had added 18.2 million new subscribers last year—roughly half of the 36.6 million net new subscribers added in 2020, and primarily driven by new memberships in Europe, the Middle East, and Africa and Asia-Pacific economies, according to Kagan, a media research group within S&P Global Market Intelligence.

Economic conditions in major markets are changing as the geopolitical shock of war in Ukraine and associated inflationary pressures weigh on global growth. In the U.S., the region which accounts for Netflix’s largest market share, the business and technology services sector is likely to see the positive operating momentum of last year slow in 2022 alongside lagging U.S. GDP growth, persistently high inflation, a tight labor market, and rising borrowing costs, according to S&P Global Ratings.

Still, the streaming wars between Apple TV+, Amazon Prime, Disney+, and Netflix, as well as other industry players like HBOMax, Hulu, NBCUniveral’s Peacock, and Warner Bros. Discovery’s Discovery+ and CNN+, are intensifying at a frenzied pace. In the crowded marketplace, streaming providers are competing with different price points, original content offerings, and the potential for advertisements to maintain their market share, subscribers, and operations. S&P Global Ratings expects major U.S. media companies to spend over $100 billion on content just in 2022 as media and tech companies fight to fuel growth in their video streaming services.

"You hit a ceiling because people have limited attention, and they begin putting attention in other platforms, so pricing becomes less workable," Alejandro Rojas, vice president at streaming media analysis firm Parrot Analytics, told S&P Global Market Intelligence. "The whole industry is going to get bigger than where we're at right now, and that's what we're seeing … The big question for Netflix: Can they go to 900 million or 1 billion memberships? Can they get 5x where they are today?"

The implications of international companies’ exodus from the Russian market following its attack on Ukraine and in consequence of international sanctions has brought additional stress to Netflix and other technology firms. Analysts interviewed by S&P Global Market Intelligence believe that the decline in Russian members and Netflix’s inability to add new members in the country may pose problems moving forward as the company aims to deliver a pattern of strong growth. Netflix was estimated to have 1.1 million subscribers in Russia at the end of 2021—and Russia had recently been the country with the highest growth in Netflix's European segment, with subscribers up 177.5% year-over-year in the fourth quarter of 2021, according to Kagan, a media research group within S&P Global Market Intelligence.

After reporting the loss of approximately 200,00 subscribers for the first three months of this year, Netflix’s shares are down 62.5% year-to-date as of April 20, equating to a loss of roughly $166 billion in market capital in less than four months, according to S&P Global Market Intelligence.

“The S&P 500 finished almost unchanged yesterday as strength in Real Estate and Consumer Staples—both up 2%—was offset by a plunge in Communication Services, off 4% on the day following a 35% collapse in Netflix,” Benedek Vörös, director of index investment strategy at S&P Dow Jones Indices, said in a note today. “Including Netflix’s recent nosedive, the S&P 500 Communication Services sector is now down 18% year-to-date, making it responsible for 2% of the 6% year-to-date loss of the S&P 500.”

Today is Thursday, April 21, 2022, and here is today’s essential intelligence. 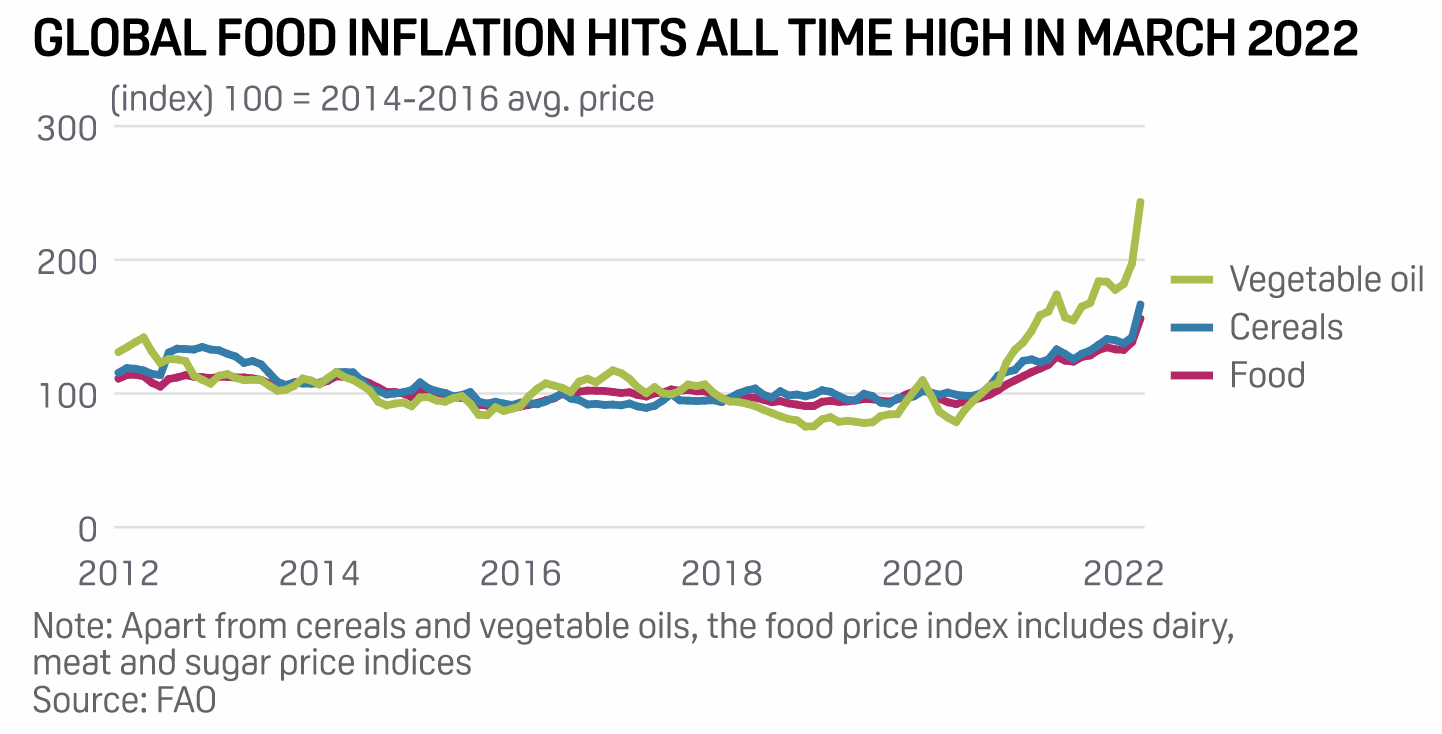 The historically high food and agriculture commodity prices are likely to sustain for multiple upcoming seasons driven by various factors like the Russia-Ukraine conflict and high farm input prices, said Monika Tothova, an economist with United Nations Food and Agriculture Organization, in an interview with S&P Global Commodity Insights. "It is very likely that food prices are going to stay elevated, given by the supply and demand shock but also by the higher cost of agriculture inputs," Tothova said. 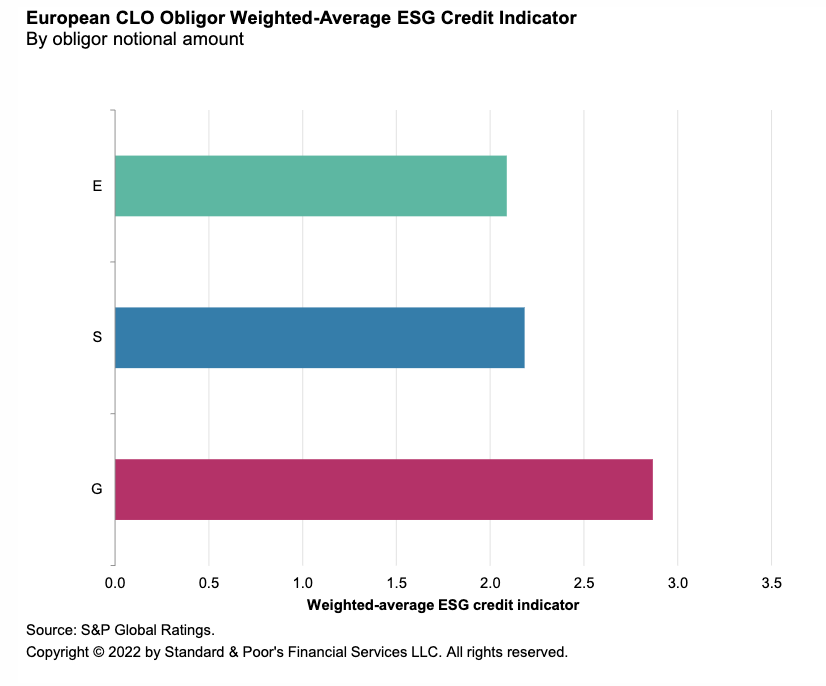 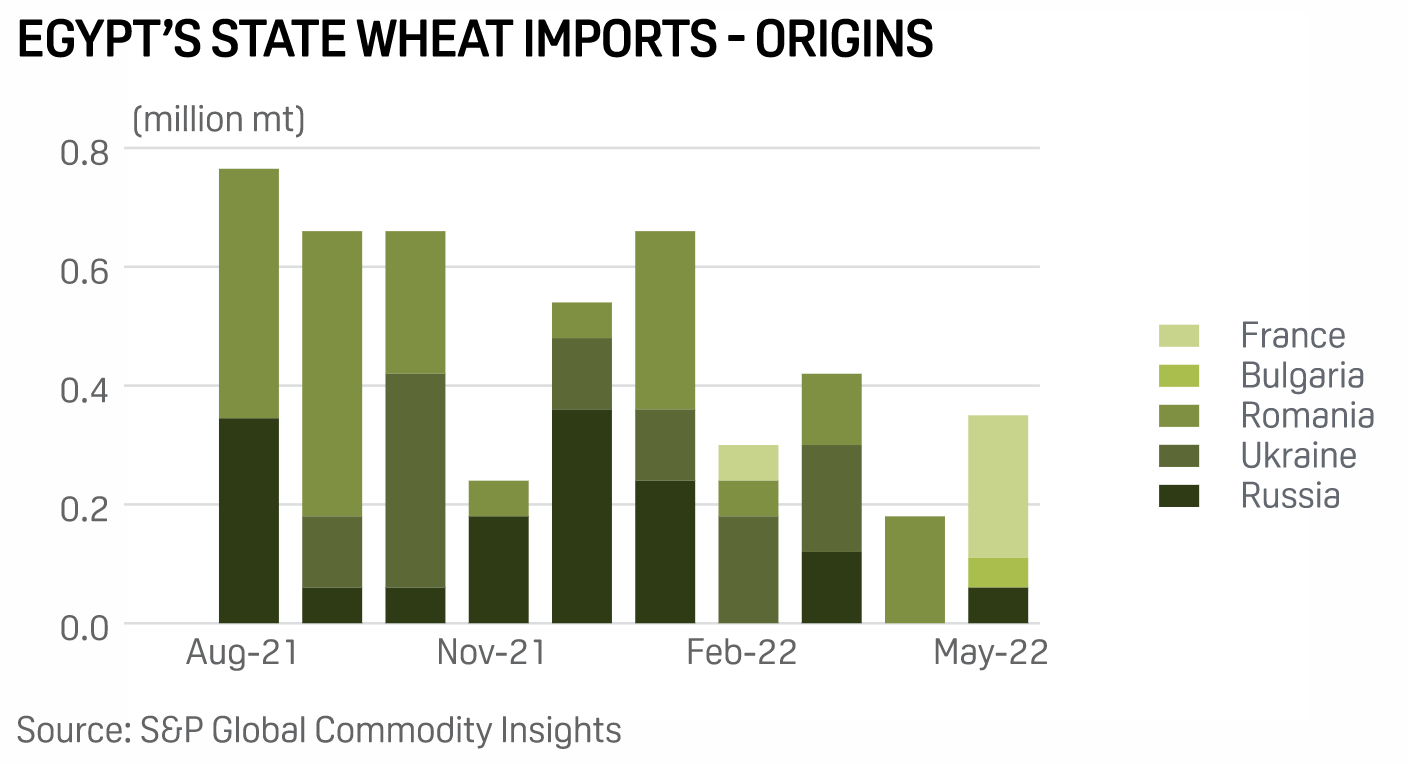 India may be able to export only 1 million mt of wheat to Egypt in marketing year 2022-23 (July-June) due to quality and logistics issues, trade sources told S&P Global Commodity Insights. This comes after the Indian government announced plans to raise exports to Egypt to around 3 million mt in MY 2022-23 after it gained approval from the Middle Eastern country to be a source of supply in the week of April 15. India has been planning to capitalize on the shortfall in supply from the Black Sea following Russia's invasion of Ukraine and ramp up its exports to key importers.

Listen: Renewable Energy Certificates Play A Role In Decarbonization, But Do They Have Real Economic Value?

U.S. states are ramping up their decarbonization goals in legislation, and corporations are committing to powering their operations with renewables. Enter Renewable Energy Certificates. What role do RECs play in the energy transition, and do they bring more clarity or challenges to the race to decarbonize? Global Power Manager Amy Gasca leads the discussion with Power Pricing Analyst Nicole Baquerizo and Senior Manager of North American Power Analytics Morris Greenberg. 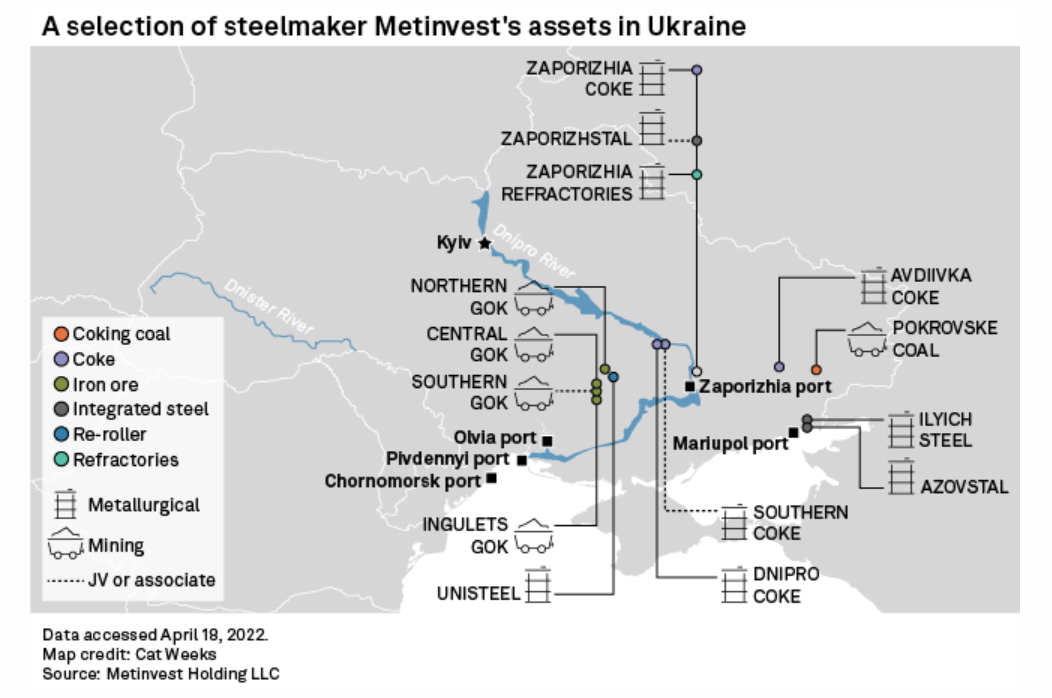 One week before Russia invaded Ukraine, the country's largest private employer and steelmaker outlined plans to modernize its Ukrainian facilities and continue construction of its new private technical university in the city of Mariupol. But the war turned the mining and metallurgical company's plans upside down, driving it to become a critical source of defense materials and humanitarian aid in the besieged country instead. Mariupol, the location of nearly one-third of Metinvest Holding LLC's 97,000 employees, soon became one of the country's hardest-hit areas, and Metinvest executives had an up-close look at the devastation there. Ukrainian authorities said at least 1,000 civilians were taking cover in underground shelters at Metinvest's Azovstal steel plant as Russian troops dropped bombs on the facility, Reuters reported April 19. 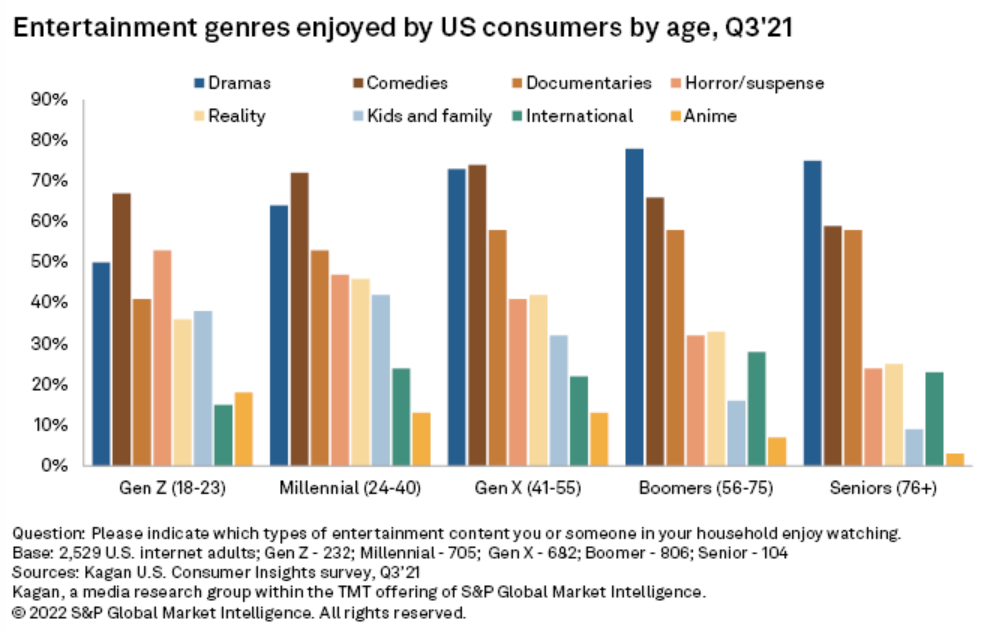 It is no surprise that Americans enjoy watching comedies and dramas, but a range of genres—spanning anime, documentaries, horror/suspense, and reality TV—also resonate with different age groups and ethnicities. Kagan's Consumer Insights survey of 2,529 U.S. internet adults conducted in September 2021 showed 70% of households enjoyed watching dramas and comedies, with documentaries (55%), horror/suspense (40%), and reality (39%) rounding out the top five most enjoyed genres. Segmenting respondents by age group highlights various generational differences in genres enjoyed—important factors for traditional TV programmers and streamers alike as they look to engage audiences and attract new viewers. While comedies were widely popular across all age brackets, older viewers favored dramas, although a fairly robust 50% of Gen Z respondents did report enjoying dramas.