In California, greenhouse gas emissions produced by this year’s record-breaking wildfire season have climbed past the industrial, power and residential emissions categories and could even overtake transportation as the top polluter, according to estimates by S&P Global Platts Analytics.

The scale and devastation of the California wildfires have also added urgency to the state government’s climate priorities, with the latest measure targeting that top emitter, cars. 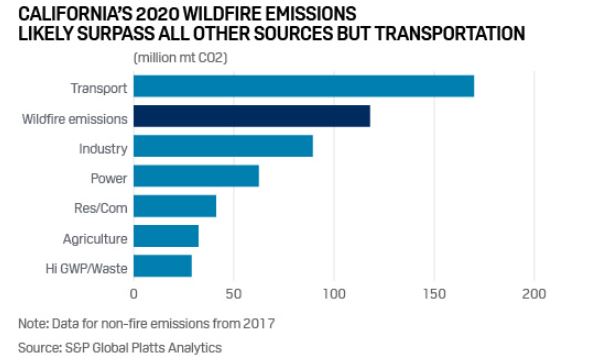 “If these vehicles want to plug into the grid, you have to shore up the grid too and make sure the grid is as low carbon as possible,” said Jennifer McIsaac, emissions and clean energy analyst for S&P Global Platts Analytics.

“Moving to 100% of passenger car sales by 2035 goes pretty far beyond what we had been assuming,” she said. “Making the goal and then meeting the goal are two different things.”

A second term for President Donald Trump would mean continued legal wrangling between California and the Environmental Protection Agency, with the chief threat being a revocation of the state’s waiver to set tougher-than-federal clean air standards.

“This means that the question of whether California will hit this new target is really about enforcement,” Reynolds said. “Will the California government enforce this requirement on vehicle producers in 2035? If there’s a change of heart from state leadership from now until then, we could see the goal rolled back.”

But Reynolds said CARB has consistently been one of the most progressive state agencies in the country on the issue of electric vehicle adoption. And expected steep reductions in battery prices and buildouts of charging infrastructure will only increase the government’s willingness to enforce the target, he predicts.

Reynolds said the second factor that will determine if the state reaches the target is that “there’s a difference between compliance with the mandate and actually putting plug-in electric vehicles on the road.”

“So this means to hit the 100% target, manufacturers might not literally have to sell 100% electric vehicles – they only have to submit credits equal to the number of vehicles they sold that year,” Reynolds said.

But Reynolds cautions that a Biden win and elimination of the EPA fight remain “big, big hypotheticals” for the future of California’s clean car policies.

“The ball is still very much in the air for automakers,” he said. “If Trump wins, we think the Supreme Court would uphold a termination of that waiver and would eliminate the ability of California to enforce that ZEV program.”