Bank customers have come to expect increasingly novel features from mobile bank apps, turning apps themselves into competitively differentiating products for banks. Apps have evolved from simple, digital snapshots of checking account information into sophisticated tools with an array of account management capabilities.

To see which banks are pushing the envelope in terms of new and innovative mobile features, we looked at apps from nearly two dozen banks in the U.S., ranking each based on the comprehensiveness of their respective app.

The bank apps in our ranking have converged on basic features like account balance, recent activity, and mobile check deposit, so our assessment focuses on more advanced features that are not yet pervasive across all banks. The matrix includes 22 banks, including the big four, select regional institutions, and major online banks, ranked by availability of 16 mobile bank app features.

Wells Fargo & Co. boasts the most comprehensive mobile app, offering 88% of the features for which we surveyed. Bank of America Corp. followed in second place with 75%, while Capital One Financial Corp., United Services Automobile Association and BB&T Corp. tied for third with 56%. 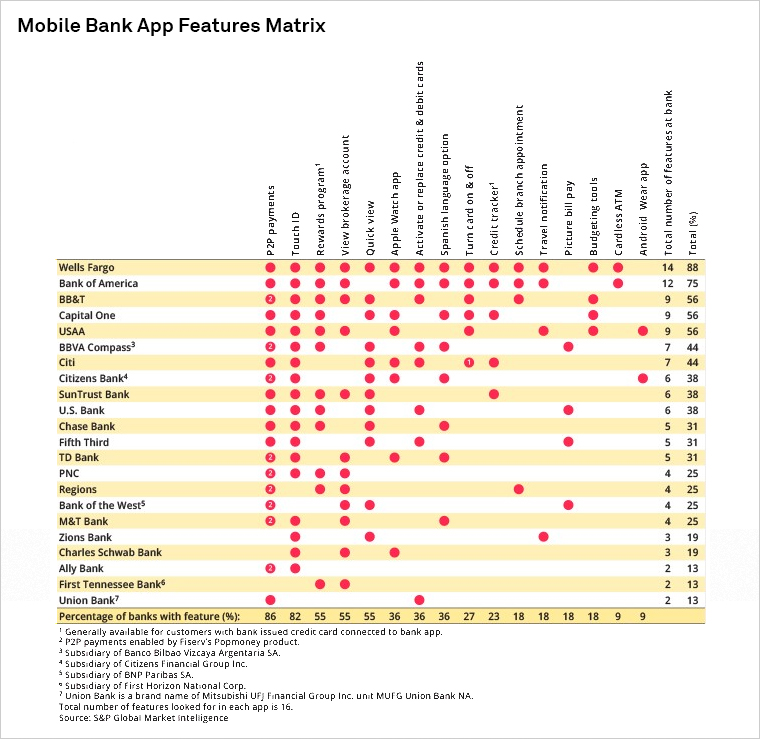 Bank of America and Wells Fargo each offer credit tracking services to users and have launched cardless ATMs, enabling customers to make transactions using near field communication-enabled smartphones. Person-to-person (P2P) payments, which enable users to transfer money from their account to another individual, represented the most ubiquitous feature with 86% of banks offering the service in their app.

Touch ID, available across 82% of the banks, allows users to login to their bank app biometrically using a thumbprint recognition feature built into smartphone hardware. Thumbprints are the most common input for biometric verification, but banks on the leading edge are working on new biometric login techniques including iris scanning, facial recognition (selfie) identification, and voice recognition.

Reward collection and redemption features were available among 55% of the banks surveyed. A growing feature among bank apps, reward programs allow customers with a bank branded credit card to redeem associated credit card rewards points from the same app they use for banking. The ability to view brokerage account details was also available at 55% of the banks studied, but this feature is generally restricted to brokerage accounts held at the same bank as the individual’s checking account.

Quick view, the quasi-controversial feature that allows users to view account balance information with a quick, unauthenticated, swipe on the app launch screen, was available in 55% of the bank apps. Many banks are wary of offering this feature, fearing the potential for unscrupulous handling of private account information. 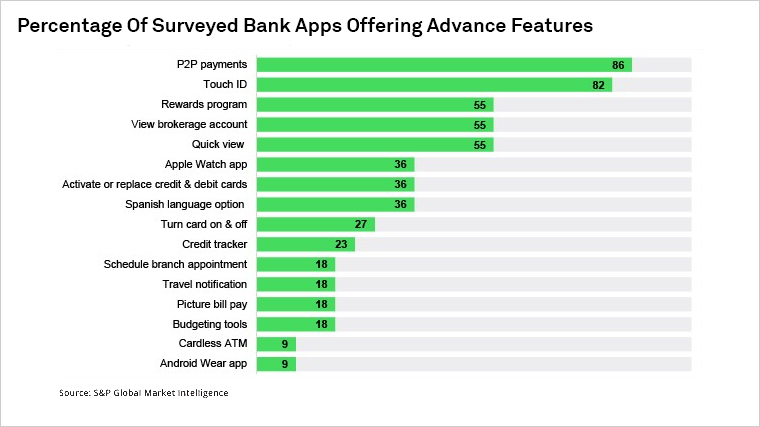 More than a third of the banks ranked offer an Apple Watch app, compared to just 9% that offer Android Wear apps. Smartwatch apps lack the functionality of smartphone apps, typically offering just account balances and recent transactions. None of the currently available Apple Watch bank apps allows users to move money between accounts or make payments from the app itself.

According to results from S&P Global Market Intelligence's 2016 mobile money survey, the most commonly missing feature in bank apps that users would like to see is budgeting tools. Despite high demand, such tools are rare among the bank apps we ranked, with just 18% of apps offering features for budgeting or personal financial management. Some banks, like PNC Financial Services Group Inc. and Toronto-Dominion Bank, do offer robust budgeting tools, but in separate apps. In the case of TD Bank, its TD MySpend money management app is only available in Canada.

The higher ranking banks are increasingly offering tools that reduce frictions and, importantly, the need for expensive human customer service representatives. These include features such as Spanish language app options, travel notifications, the ability to turn cards on and off, and the ability to conduct in-app debit/credit card activations.

As technology advances, apps are becoming more important cost-saving instruments as banks transfer more customer service-oriented capabilities online and into apps. Bank apps are also becoming more important to banks in terms of their effect on bank customer turnover. Mobile money survey results show that among respondents that switched their bank in the preceding 12 months, 22% were motivated to do so in order to get a better mobile bank app experience. As bank apps become more and more advanced, we expect their competitive importance will continue to grow.

Innovation in bank apps shows no signs of abatement, and it looks like artificial intelligence (AI) will play an increasingly prominent role in future bank app iterations. Bank of America is leading the charge, announcing in October that it will embed a chat bot into its app in 2017. The aptly named "Erica" chat bot will allow customers to chat with the app via voice or text, and will use artificial intelligence and predictive analytics to help customers manage finances and make payments. USAA's venture capital arm has made recent investments in AI company Context 360 and is piloting the technology for fraud prevention purposes. Fintech companies are choosing to collaborate on chat bots, including Mastercard Inc. and PayPal Holdings Inc., which recently announced plans to integrate chat bots into the Facebook Messenger app.

The methodology behind these rankings included in-depth investigation into each of the bank apps in the matrix. Availability of app features was determined by studying app descriptions on bank websites and information in both the Android and iOS app stores. Where possible, information was gleaned from the actual app. When needed, calls were made to customer service to check availability of certain features. Research was conducted between October 1 and November 10 and may not reflect features added in subsequent enhancements or upgrades.