The numbers are in. In line with S&P Global Ratings' forecast, 2016 was a marked improvement for most U.S. Blue Cross Blue Shield (Blues) insurers' operating performance in the Affordable Care Act (ACA) individual market. But target profitability is still a couple of years away.

Looking forward, we expect insurers, on average, to get close to break-even margins in this segment in 2017. But 2018 and beyond are still uncertain given potential legislative changes to the U.S. health insurance market and the pending legal battles over the cost-sharing reduction (CSR) subsidy. If the market continues unaffected, with a few fixes rather than an overhaul, we expect 2018, or Year 5 of the ACA individual market, to be one of gradual improvement with more insurers reporting positive (albeit low single-digit) margins. But if there are significant changes to the individual market, or if CSRs are made null and void, the market essentially has to restart with a new set of rules.

Other than operating performance, a key area of focus for the individual market is insurers' participation in the ACA marketplace (exchanges). Based on recent exit announcements, states like Tennessee and Iowa may have counties with no insurer on the exchange in 2018. This issue may worsen if the uncertainty around market rules and subsidies isn't clarified sooner rather than later. Insurers need to file their initial rates and products for 2018 in May and June of this year. Having them decide without adequate information may result in either higher-than-expected premium rate increases, or a few insurers hesitating to remain in the market.

Improvement in 2016, But Target Margins Are Still a Couple of Years Away

As we have stated previously, we expect a five-year path to stability. 2016 was year 3. After starting on the wrong foot in 2014, and deteriorating further in 2015, we are seeing the first signs in 2016 that this market could be manageable for most health insurers. Other than a few exceptions like the Florida and New Jersey Blues, most Blue plans have struggled in this line of business. But the medical loss ratios (MLRs) for most Blues improved significantly in 2016. MLRs represent the percentage of premiums insurers pay out in claims. The weighted average MLR for the Blues included in our study was about 92% for full-year 2016, compared to 106% in 2015 and 102% in 2014. 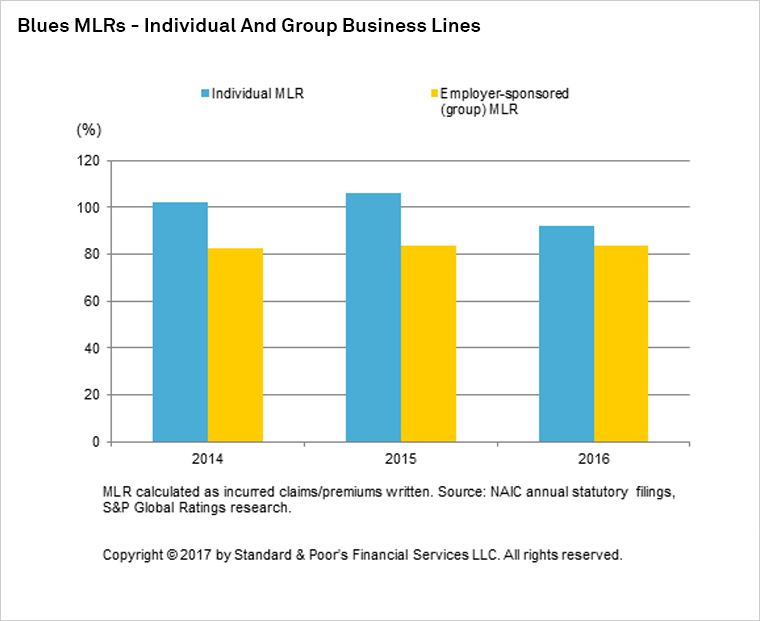 On a gross profit/loss (before accounting for administrative cost) basis, an MLR below 100% indicates that the insurer had some money left over after paying medical claims. 2016 was the first year since the start of the exchanges that the Blues reported a gross profit (in aggregate) in the individual business line (see chart 2). But adding in administrative cost to get to underwriting profit/loss, most of the insurers (especially those with MLRs above 90%) would continue to report an underwriting loss. This means more time is needed for this market to mature before consistent underwriting profits are possible. 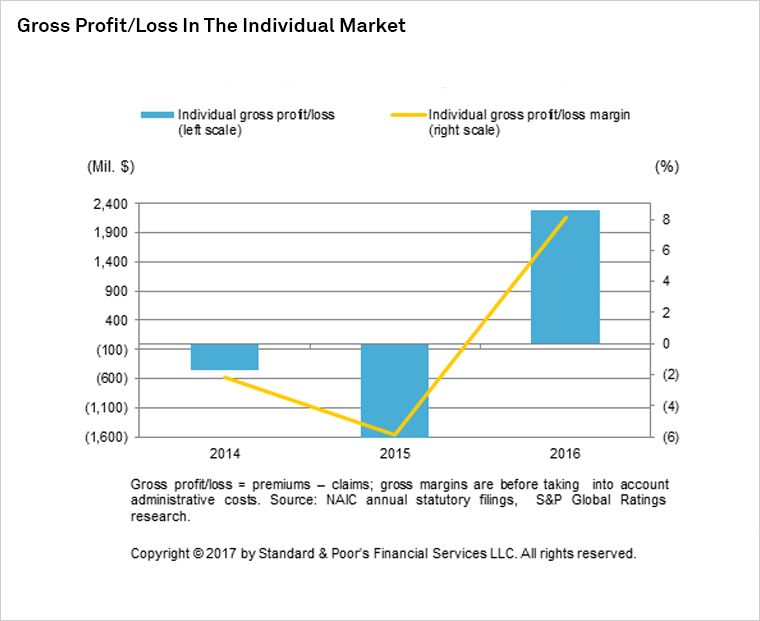 Our analysis of 2016 results and the market enrollment so far in 2017 shows that the ACA individual market is not in a "death spiral." But it isn't on a stable footing either. As a point of comparison, we looked at the employer-sponsored (group) insurance market. The group line of business, which continues to be the dominant segment for the industry, remains fairly steady for most diversified insurers. Both the MLRs and gross margins (see charts 1 and 3) in the group business are better and more consistent than those in the individual market. The obvious difference is scale or size of the risk pool. But the other difference is maturity of the risk pool. Although the individual risk pool will not achieve the scale of the group market, it will mature with time. 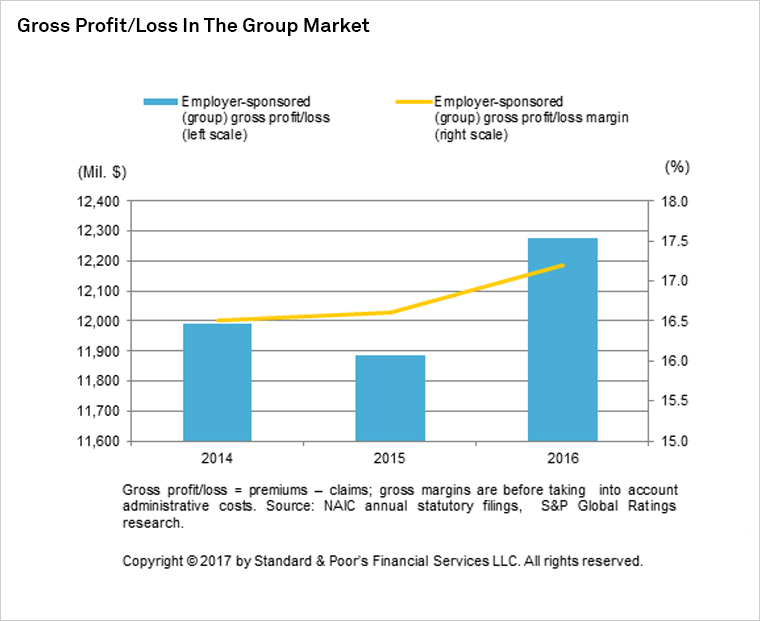 Insurers have put in meaningful premium rate increases, along with product and network changes, for 2017. Besides correcting for morbidity risk, the pricing increases also attempt to cover for the end of the ACA reinsurance program. Unlike the risk corridor that failed to pay out as initially expected, the ACA reinsurance program proved fairly effective for insurers. Funded by reinsurance contributions by eligible insurers, the ACA reinsurance program paid out close to $16 billion for 2014 and 2015. The reinsurance program expires after 2016. We believe the continued pricing correction and network design changes, along with regulatory fine-tuning of ACA rules, will result in closer to break-even underwriting results, on average, for the individual market this year. But most will remain below their target profitability levels (low single-digit margins for the Blues) in 2017. It will take another year or two of continued improvements to get to that target.

The sharp rise in premium rates in 2017 didn't lead to a significant drop in enrollment, and perhaps a potential "death spiral." This is because of the stabilizing effect of ACA's income-based advanced premium tax credit (APTC). As per the Center for Medicare and Medicaid Services (CMS), the gross average monthly premiums (before APTC) for APTC-eligible enrollees increased more than 20% in 2017. But CMS noted that there was almost no year-over-year change in the net average premiums (post APTC). Over 80% of the enrollees on healthcare.gov received an APTC linked to the actual price or market premium; so as premiums went up, so did their subsidies. This effectively hedged them against the sharp premium increase. There was a decline of 5% in 2017 enrollment when compared to 2016 open enrollment, but it could have been far worse if not for the APTC and CSR subsidies.

Pricing and Participation Uncertainty in 2018

As insurers continue to adjust their products and pricing, we expect some premium rate increase in 2018 as well. If it remains business as usual, we expect 2018 premiums to increase at a far lower clip than in 2017. Premium increases are common in the insurance space. Even the group market undergoes premium increases each year. But the scale of increase is generally smaller than what happened in the individual market in 2017.

If it is business as usual, we expect low single-digit year-over-year growth in membership/enrollees for 2018. As for insurer participation, we expect most counties in the U.S. to continue to see at least one insurer on the exchange in 2018. However, based on recent company announcements, certain counties may be left without any insurer on the exchange in 2018. We observed some correlation between insurer participation and Medicaid expansion. For example, four out of the five states (Alabama, Alaska, Oklahoma, South Carolina, and Wyoming) that have one insurer on the exchange in 2017 also don't have an expanded Medicaid program. Insurers also consider other factors when deciding to participate on an exchange, including population size, morbidity levels, and their own tolerance for volatility in earnings.

Any significant overhaul or increased uncertainty may lead to a different result than we have forecasted for 2017 and 2018. If the legal battle over CSRs isn't concluded soon, or if insurers don't have clear assurances that they will be paid for CSRs in 2018, they will have to make a decision on pricing and participation without adequate information. Additionally, the spotlight will be on the U.S. Dept. of Health and Human Services to continue implementing ACA in its current form until a different health insurance reform bill becomes law. Clarification on the CSR subsidy, enrollment outreach, and enforcement of special enrollment periods and the individual mandate will top the agenda for the future stability of the individual marketplace. If insurers are uneasy regarding the future of the market, they may have to decide between adding an "uncertainty buffer" to their pricing or--worst case--exiting the exchanges altogether.

We view the individual market as being in the early stage of development, and therefore somewhat fragile. There was an individual market before 2014, but the current ACA individual market is only four years old and needs time to stabilize. Additionally, right from the start multiple external factors have disrupted this market, such as technical issues with the healthcare.gov website in 2014, after-the-fact rule changes related to the grandmothered plans, altering the risk corridor to be budget-neutral, and the more recent CSR court case and potential for legislative overhaul. Every time something new (and potentially disruptive) is thrown into the works, it impedes the individual market's path to stability.

We focused on the Blues as a case study for our analysis. In most states, Blues have leading shares of their local individual markets and are participating on and off the exchanges. For Blues that have more than one legal entity, we combined the multiple entities where possible. We did not include the for-profit Blue plans that are part of the publicly traded Anthem Inc. group. Also, we did not include Blue Shield of California because statutory filing templates in California differ significantly from those in the remaining states.