How Much Will Global Sovereigns Borrow in 2018?


How Much Will Global Sovereigns Borrow in 2018?

Our annual survey of global sovereign debt and borrowing compiles data pertaining to all rated sovereigns. We project that the sovereigns we rate will borrow an equivalent of $7.4 trillion from long-term commercial sources in 2018--roughly the same as in 2017. We forecast gross long-term commercial borrowing to drop slightly to 9% of rated sovereigns' GDP in 2018, from an average of 9.5% during the three preceding years.

Some 73%, or $5.4 trillion, of sovereigns' gross borrowing will be to refinance maturing long-term debt, resulting in an estimated net borrowing requirement of about $2 trillion, or 2.5% of the GDP of rated sovereigns (see table 1). Net borrowing as a share of GDP has been decreasing gradually from 5.4% in 2014 as a result of governments extending their maturity profiles in a low interest rate environment and gradual improvements in fiscal consolidation in several countries. But they also reflect exchange rate movements, as all numbers presented here have been converted into U.S. dollars. Consequently, we project that the commercial debt stock of sovereigns we rate will rise by 2.5% to reach an equivalent of $47.3 trillion by the end of 2018. We expect that outstanding short-term commercial debt will remain unchanged at $4.8 trillion at year-end 2018, or 10% of total commercial debt stock.

f--Forecast. *Excluding Venezuela due to distortions caused by hyperinflation and multiple exchange rates. 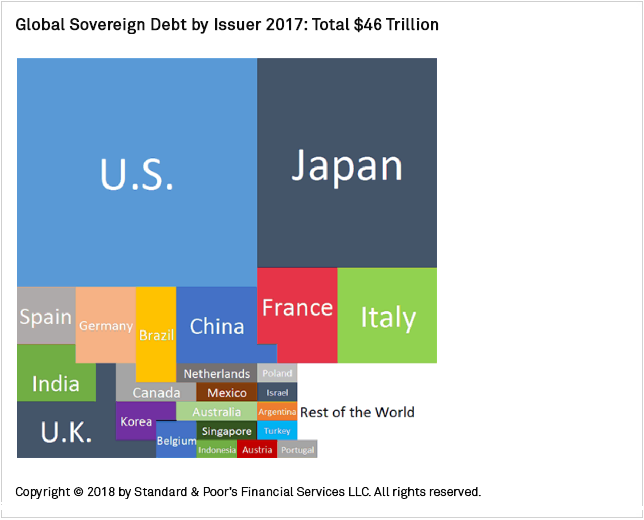