Killing NAFTA Would Hurt the U.S. Economy and American Manufacturers


Killing NAFTA Would Hurt the U.S. Economy and American Manufacturers

If President Donald Trump follows through on his promise to tear up the North American Free Trade Agreement (NAFTA), this could, counterintuitively, hurt U.S. manufacturers and trim billions of dollars a year from the world's biggest economy, according to S&P Global U.S. Economics.

Moreover, ending what the president has called "the worst trade deal" in U.S. history, as part of the administration's broader push toward de-globalization, could disrupt global supply chains and ultimately put pressure on the bottom lines--and thus the credit quality--of import-reliant firms in the U.S. (see "De-Globalization Could Disrupt U.S. Supply Chains," published May 30, 2017).

It's difficult to isolate the direct effects NAFTA has had on trade and investment from other factors, such as rapid improvements in technology and automation. Indeed, as an April 2015 Congressional Research Service study of the deal noted: NAFTA "may have accelerated the trade liberalization that was already taking place, but many of these changes may have taken place with or without an agreement." What is indisputable, however, is that trade among the U.S., Canada, and Mexico has tripled since the agreement was signed, to over $1.1 trillion in 2016 from just $290 billion in 1993. Cross-border investments among the member countries also grew significantly, to $731.3 billion from $126.8 billion in 1993 (see chart 1). The elimination of many costly tariffs and other trade barriers, particularly with Mexico (Canada was already in a free trade agreement with the U.S.), helps explain why trade between regional partners blossomed. 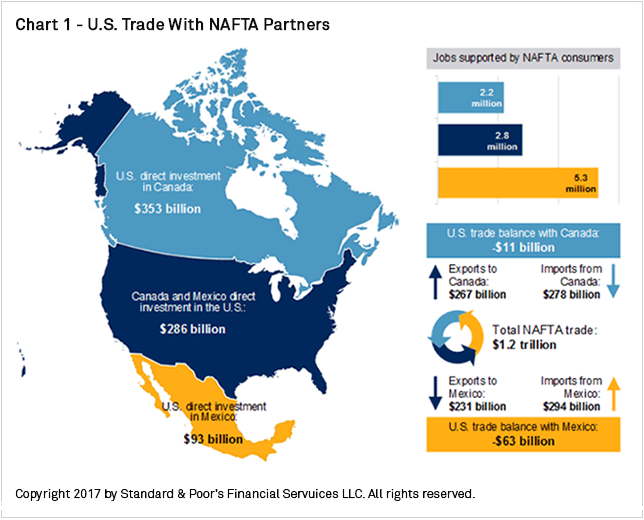 S&P Global agrees with most estimates concluding that NAFTA has had a modest but positive affect on U.S. GDP, adding several billion dollars to economic growth each year. Granted, that represents a drop in the bucket for the $18 trillion U.S. economy but it runs counter to the idea that the deal has been, in a word, a "disaster." Moreover, without the help from streamlined supply chains, S&P Global believes that more U.S. business would have been lost to competition abroad.

The Myth Of Manufacturing's Return

While critics claim that overseas products are squeezing out domestic goods, U.S. manufacturing conditions are, in general, better than they were in the lackluster years leading up to the implementation of NAFTA, when the sector's annualized pace of production slowed. Since the agreement was signed into law on Dec. 8, 1993, manufacturing production picked up dramatically with the Great Recession temporarily slowing, but not ending, what has been a mini-renaissance of sorts. 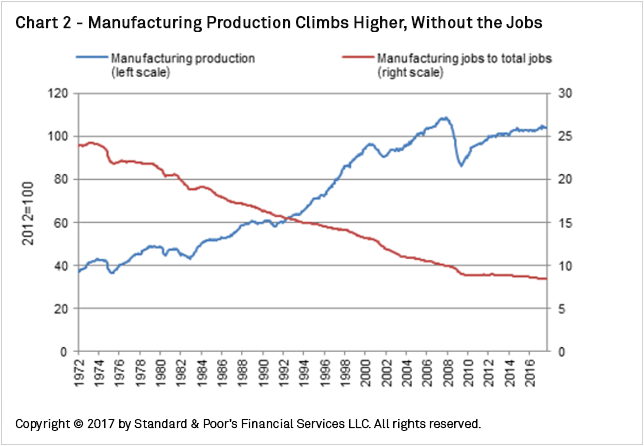 This is not to say that American manufacturers haven't suffered. The sector has lost more than one-third of its jobs, falling to about 12 million today from the peak of 19.6 million in June 1979. Manufacturing jobs, which accounted for 24% of total jobs in 1974, now represent only 8.5% with certain industries faring far worse than others. Hit the hardest from competition abroad was the U.S. apparel industry, which shed 85% of its jobs from 1991-2016, as employment at textile mills tumbled 76%, according to the Bureau of Labor Statistics. So it's no surprise that many Americans see the appeal of tighter trade policies that would help shore up certain industries, primarily through taxes and tariffs that would make imports more expensive.

The problem with this view is that the number of job losses directly caused by cheap imported goods represents a small fraction of the normal churn in the U.S. labor market. According to a January 2016 research paper by Daron Acemonglu, David H. Autor, David Dorn, Gordon H. Hanson, and Brendan Price, and published in the Journal of Labor Economics, imports (such as apparel) from China displaced as many as 985,000 workers in U.S. manufacturing industries from 1999-2011. But S&P Global U.S. Economics notes that, while the loss of nearly 1 million manufacturing jobs in a dozen years is significant, there are about 1.7 million layoffs the U.S. labor market every month under normal conditions in a jobs market that employs around 150 million people. Additionally, the U.S. economy has added 994,000 manufacturing jobs through September since the figure bottomed out at 11.5 million in early 2010 (see "Automation Marches On: Do Jobs Need To Be Collateral Damage?," published June 7, 2017). China's growing trade strength against U.S. producers gave the U.S. more reason to align with its regional partners in order to keep its competitive edge. Indeed, losing its comparative advantage in a global market may have meant more lost jobs as China's manufacturing power gained strength.

Lost manufacturing jobs are likely more the result of technological updates than trade. Indeed, "The Myth and the Reality of Manufacturing in America" June 2015 study by the Center for Business and Economic Research at Ball State University found that technological change rather than trade was responsible for 85% of that total. It noted that this should be viewed as an example of the impact of productivity growth, not actual lost jobs from productivity.

Overall, it's hard to deny that manufacturers are producing more with fewer people thanks to the help of Mr. Robot. That helps explain why Deloitte found in its 2016 Global Manufacturing Competitiveness Index that U.S. manufacturing is now the second-most competitive in the world, behind China. But not for long. Deloitte expects U.S. manufacturing to surpass China by the end of the decade, largely thanks to increased productivity from advanced technologies.

To A Large Degree, "Hecho En Mexico" Means "Made In America"

In a further sign that blaming trade for sweeping job losses is misguided, consider that many items with tags saying they're made elsewhere include a significant amount of stuff made in the good ol' U.S. of A. In fact, for every dollar spent on Mexican imports, 40 cents goes toward services or products provided or made in America, according to a November 2011 Wilson Center report, with the U.S. exporting twice as much money to Mexico as to China. That figure is a still-significant 25 cents for Canadian products and highlights the unbreakable links between the U.S. economy and those of our neighbors.

As trade representatives from the three member countries continue their efforts to rewrite NAFTA, it's worth remembering that American jobs were already heading out the door, or sailing across the oceans, to China and other cheap-labor regions. In fact, NAFTA may have helped keep some jobs in place and may even be responsible for creating employment as the U.S. continued its decades-long march toward being a services-heavy economy, rather than a goods-producing one.

While dismantling NAFTA might protect some jobs in certain segments of the U.S. labor force, other Americans would feel the pain. Many of the millions of jobs that benefit from free trade would be in jeopardy forcing people who transport, stock, and sell these products on U.S. soil to look for other work. The Organization for Economic Cooperation and Development found that 2.8 million U.S. jobs that involve storing or shipping final goods could be lost if NAFTA is unwound. The U.S. Chamber of Commerce said that trade with Canada and Mexico supports nearly 14 million U.S. jobs. They found that nearly 5 million of these net jobs are supported by the increase in trade generated by NAFTA, which would be threatened if NAFTA is reversed. And American consumers would see higher prices at stores, with low-income households suffering the most. In short, it's difficult to see the economic benefits of increasing prices on Mexican and Canadian imports for 45 million low-income Americans (as well as everyone else) in an effort to save just some of the jobs in an industry that accounts for roughly 85 of every 1,000 full-time jobs in the U.S. labor force.

All of this assumes that the unwinding proceeds without any retaliation, and that all actors abide by World Trade Organization rules on tariffs. Either way, it seems clear the U.S. would have continued to bleed manufacturing jobs, even if NAFTA had never succeeded. And succeed for the U.S. economy it has, in our view.