Despite business concerns that hit the digital lending industry earlier in 2016, loan originations continue to grow compared to previous years, with a notable bright spot in student-focused lending.

A new report by S&P Global Market Intelligence estimates that 13 key lenders in the segment originated $20.64 billion in loans during the first three quarters of 2016, a 31.6% increase from the same period in 2015. The report analyzes trends for digital lenders in the personal, small and medium business (SMB), and student-focused lending segments. 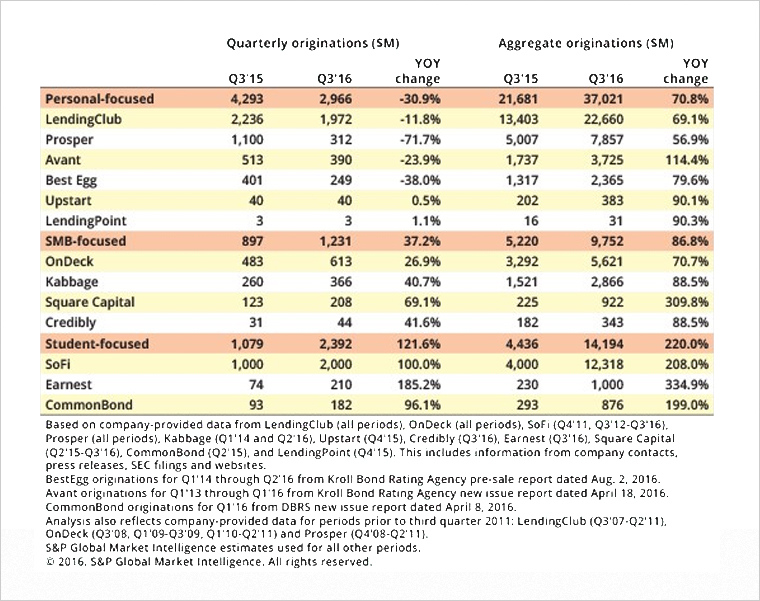 Growth has been rapid across the sector, with estimated originations for these lenders increasing at a five-year compound annual growth rate (CAGR) of 137.0% for the period ended September 30, 2016. During the early part of 2016, loan demand started to outpace supply of capital, and many lenders have moved toward institutional investors, internal balance sheet funding, and securitization to fuel the feverish growth in the industry. 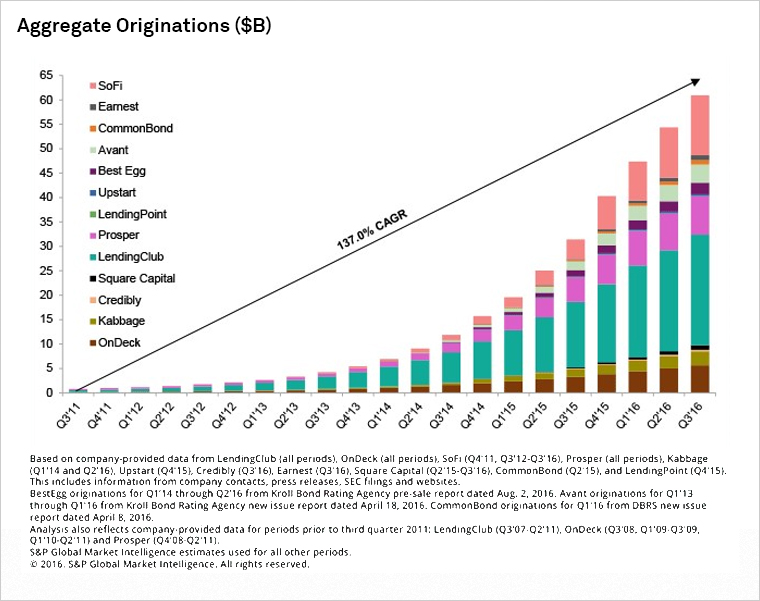 Student-focused lenders, which primarily offer student loan refinancing, are the newest and fastest growing segment of the lenders analyzed in the report, with a three-year CAGR of 310.3% for the period ended September 30, 2016. Loans issued grew from $2.0 million at the end of 2011 to $14.19 billion at the end of the third quarter of 2016.

These student-focused platforms, namely Social Finance Inc. (SoFi), Earnest, and CommonBond Inc., are poised to grow even more under a Trump presidency. Many traditional banks exited the student loan business due to the dominance of low rate, guaranteed, government-backed lending programs. The Republican Party reaffirmed in its 2016 platform that it does not believe the government should be in the business of lending.

If the student loan industry does move toward privatization, digital lenders in the space have a strong first mover advantage. While operating over the years to refinance loans, platforms have built massive amounts of borrower data, underwriting models, and name recognition on both the borrower and the investor sides. 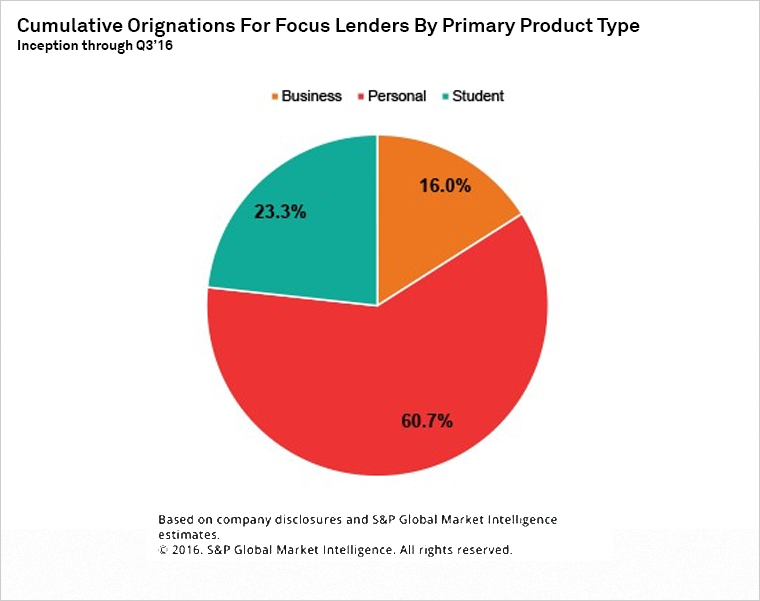 Originations have been fueled by both organic growth at established lenders and by the entry of new lenders into the space. As of September 30, 2011, only four of the 13 lenders covered in this report were issuing loans. 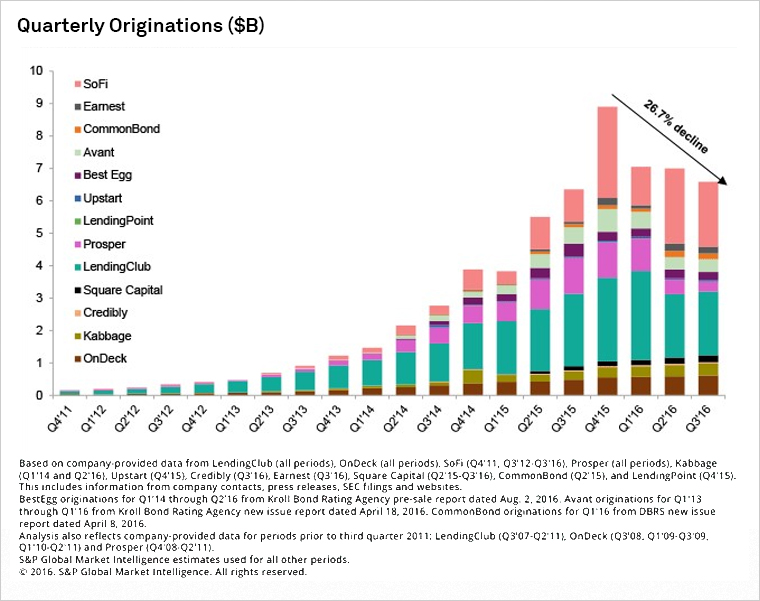 Downward pressure on originations came from a decline in institutional funding available for loans following questions regarding underwriting standards and credit quality in the industry. Many investors paused on making new investments during the first two quarters of 2016, though many had started funding loans again during the early portion of the third quarter.

Large incumbent banks are responding to the competition. Some, like JPMorgan Chase & Co., have partnered with digital lenders to use their technology on the back end but maintain bank-specific branding. Others like SunTrust Banks Inc. have purchased lending platforms and integrated them into the bank. SunTrust acquired digital consumer lender FirstAgain and re-branded it as LightStream in 2013 while handling underwriting and loan funding within the bank.

Goldman Sachs Group Inc., on the other hand, is competing directly, launching an online consumer lending platform called Marcus by Goldman Sachs in October 2016. This marks the first example of a large bank creating a digital lending platform in house and is the first time Goldman has offered consumer loans. Wells Fargo & Co. has also decided to compete with digital lenders by offering its FastFlex small business loan to bank customers, though it did not create a separate platform like Goldman did.

Product launches from banks will be important to watch as traditional financial institutions decide whether to compete or partner with digital lenders.

Other lenders have recently tried to capture more niche markets, like veteran-owned businesses in the case of StreetShares, or weddings, in the case of Promise Financial.

The full report includes an overview of the digital lending space and a breakdown of loan offerings and rates from the 13 covered lenders, in addition to origination data for the five-year period ending Sept. 30, 2016.

S&P Global Market Intelligence provides origination data from a variety of public sources in addition to internal estimates. Because the majority of the lenders covered in the report are private, regular quarterly origination information is not available. Origination estimates are based on benchmark growth rates for personal, SMB and student-focused lending categories. Public information from LendingClub Corp., On Deck Capital Inc., and Social Finance Inc. (SoFi) served as the basis for benchmarks in these respective categories. Estimates also took into consideration the age of each digital lending platform, since lenders tend to grow at faster rates during the early quarters of originating loans.

In order to create reliable estimates for subject lenders, the analysis inferred growth rates from a combination of quarterly growth by the benchmark company for the period in question and an internally calculated growth multiple dependent on how long the subject lender had been originating loans.

S&P Global Market Intelligence reserves the right to update or revise the estimates at any time as additional information is received.