China's Belt and Road Initiative: Is this the World's Largest Venture Capital Project?


China's Belt and Road Initiative: Is this the World's Largest Venture Capital Project?

China's Belt and Road Initiative (BRI) surely qualifies as the most ambitious geopolitical plan of the 21st century. Conceived in 2013, it aims at nothing less than connecting--or under some interpretations, reconnecting--the Eurasian supercontinent. This is to be done by land and by sea "Silk Roads," using infrastructure and industry and led, at least initially, by Chinese official financing. Many of the specifics of the BRI remain fluid, but it appears to be a decades-long effort involving dozens of countries and with a cost in the trillions of U.S. dollars.

An undertaking of this magnitude has potentially large payoffs as well as large risks. In this report, S&P Global's China Senior Analyst Group looks at the BRI through the lenses of economic geography, energy security, and project and credit risk. Success will ultimately rest on whether Belt and Road projects can win local hearts and minds in the recipient countries, and whether China's initial "seed money" in the initiative will create creditworthy projects that attract true private sector outside money. Seen in this way, the BRI is arguably the world's largest attempted venture capital project.

Introduction to Belt and Road: Not Quite the Marshall Plan

Chinese President Xi Jinping first introduced the Silk Road Economic Belt concept in a speech in Kazakhstan in September 2013. This is considered to have been the birthdate of the BRI (as it was later to become known). This initial strategic vision was developed further in the ensuing years, converging around regional connectivity and economic integration through the movement of goods, services and information. This culminated with a report by China's National Development and Reform Commission entitled "Vision and Actions on Jointly Building the Silk Road Economic Belt and 21st Century Maritime Silk Road." Given its somewhat fluid definition, there is some debate as to whether the BRI is a new initiative versus a platform on which to group a collection of existing initiatives. Whatever the correct interpretation, the amibition and scale are massive.

Not surprisingly, comparisons with other ambitious geopolitical projects abound, in particular the Marshall Plan, launched by the United States to rebuild Western Europe after the Second World War. The Marshall Plan was funded by one country at least initially, and was expected to lead to self-sustaining forces of economic development. In this sense, the Marshall Plan can be seen as a success. But one key difference is that the Marshall Plan was designed to rebuild a previously developed and relatively homogeneous region that was devastated by war and which had lost considerable wealth. It was also meant to establish a bulwark against westward encroachment by the Soviet Union. The BRI aims at connecting an even larger land mass, with the added challenges of building, rather than rebuilding, the foundations of a modern economy across a collection of countries that have little history of working together, few commonalities in culture, and differing geopolitical aspirations and competing spheres of influence (Russia, India, Iran, Turkey).

A final introductory issue is the "why" question. Why is China undertaking this massive and arguably expensive and risky project when Japan, the Asia power China has supplanted, did not? The answer is that China has decided it wants to have a greater control than Japan in shaping both its economic and security environment. We see this objective as a main driver of the BRI and a key differentiator from the Marshall Plan. 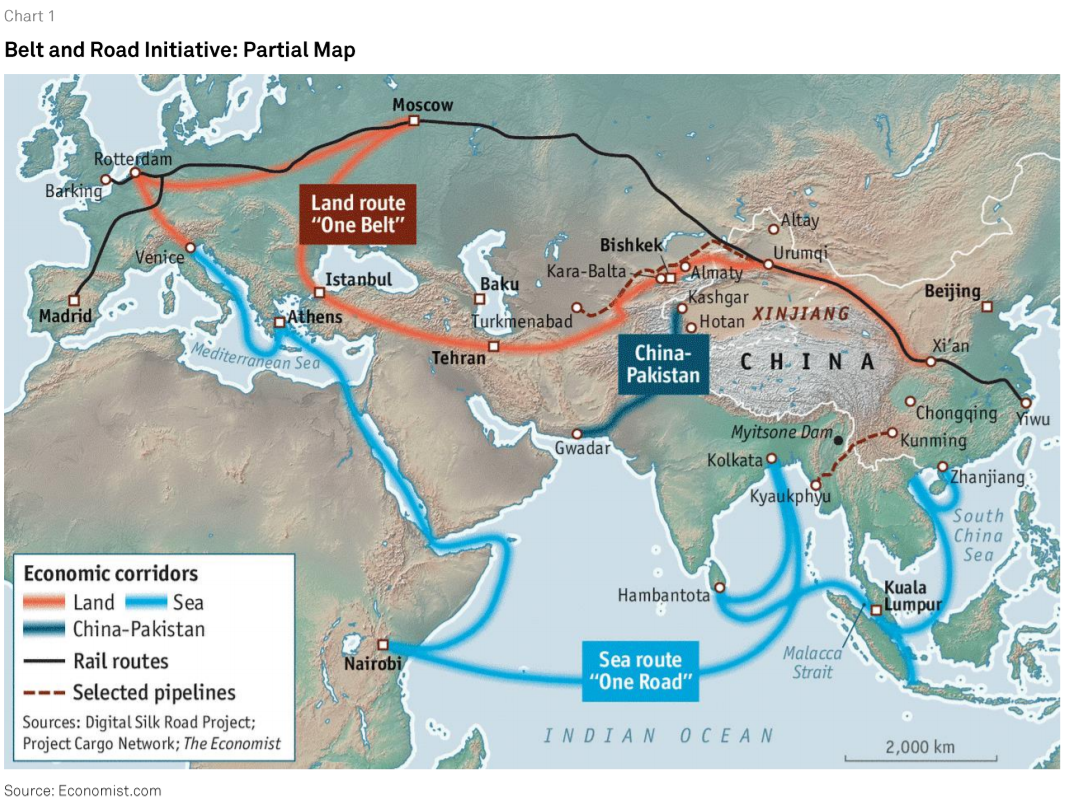