As COP27 sets the stage for progress with leaders from Government, business, and interest groups, S&P Global Sustainable1 brings together market participants to discover what’s needed to press further on partnerships, commitments, and best practices.

What a difference a year makes. The 27th Conference of the Parties to the United Nations Framework Convention on Climate Change, or COP27, begins Nov. 6 in Sharm el-Sheikh, Egypt. The lead up to COP27 has been notably subdued compared with last year’s meetings in Glasgow, Scotland. War in Ukraine, macroeconomic stress and high energy prices have dampened expectations for further agreements related to emissions reductions. Global leaders seem more concerned with how any commitments will play out for a home audience of cash-strapped consumers, who are already paying record-high prices for energy.

COP27 is intended to be an opportunity for countries to report on the progress of their goals under the Paris Agreement on climate change to limit global temperature rises to 2 degrees C above preindustrial levels, and ideally to 1.5 degrees. But very few countries have met the deadline to submit enhanced nationally determined contributions setting out how they intend to reduce emissions further.

Last year’s COP26 witnessed the signing of several major agreements, notably on coal, methane and deforestation. The conference nearly achieved a commitment to phase out coal, but it struggled to overcome opposition from India. One of the biggest questions for the conference this year will be whether countries agree to phase out coal. With high energy prices and growing demand, it seems unrealistic that delegates from India will agree to any sweeping agreements on the future of coal.

One notable change at COP26 was the increase in private sector participation. It will be interesting to see if the meetings in Sharm el-Sheikh attract such a sizable private sector audience. Regardless, the second week of meetings between country representatives will be critical for any additional commitments. Typically, agreements emerge as the time crunch toward the end of the second week accelerates the pace of negotiation. Voluntary carbon markets are looking for increased clarity and guidelines, and many participants would like to reach an agreement on carbon credit export bans.

As governments look to relieve the pressure of high energy prices for consumers, they may be paradoxically preserving the fossil fuel era. One might expect high prices to motivate consumers and companies to look to alternative energy sources. But a renewed focus on energy security seems to be shaping the conversation in a way that disfavors transition.

With so many geopolitical and macroeconomic headwinds, the question has moved from whether COP27 can achieve new commitments, to whether the conference is still relevant for the world. “The need for major centralized decisions through institutions like COP seems to be decreasing as individual countries are now setting their own targets,” Roman Kramarchuk, S&P Global Commodity Insights’ head of future energy outlooks, said in a preview of COP27. “The recent U.S. Inflation Reduction Act is one example of this kind of national policy initiative.”

Here’s what you need to know from COP27

Saudi Arabia has set its sights on becoming a global supplier of renewable and low-carbon hydrogen, configuring production standards to meet market requirements in both Europe and the Asia-Pacific region, the energy ministry's head of hydrogen, Zeid al-Ghareeb, said at the UN Climate Change Conference in Egypt Nov. 15.

Hydrogen would be a key part of the future energy mix, al-Ghareeb said, with Saudi ambitions to produce 4 million mt/year of "clean" hydrogen by 2030.

This amount could be exceeded as demand scaled up, he said.

The country did not want to differentiate between "green" and "blue" hydrogen (both of which it is developing), instead preferring a focus on carbon intensity.

"We should not focus on the source of energy," al-Ghareeb said. "We should be agnostic."

Instead, he urged a focus on emissions, in line with net-zero objectives to reduce greenhouse gas production.

Using more coal in the short term to displace Russian gas does not lead to a bigger carbon footprint for the European Union, European Commission Executive Vice President Frans Timmermans told a ministerial round table at the UN Climate Conference in Egypt Nov. 14.

The EU and Kazakhstan are to partner on developing renewable hydrogen and battery value chains, along with an agreement on securing raw material supplies, they said at the UN Climate Change Conference in Egypt Nov. 7.

With economic and energy supply pressures dominating political agendas, environmental policies have taken a back seat in 2022 in the run up to COP27 in Egypt. 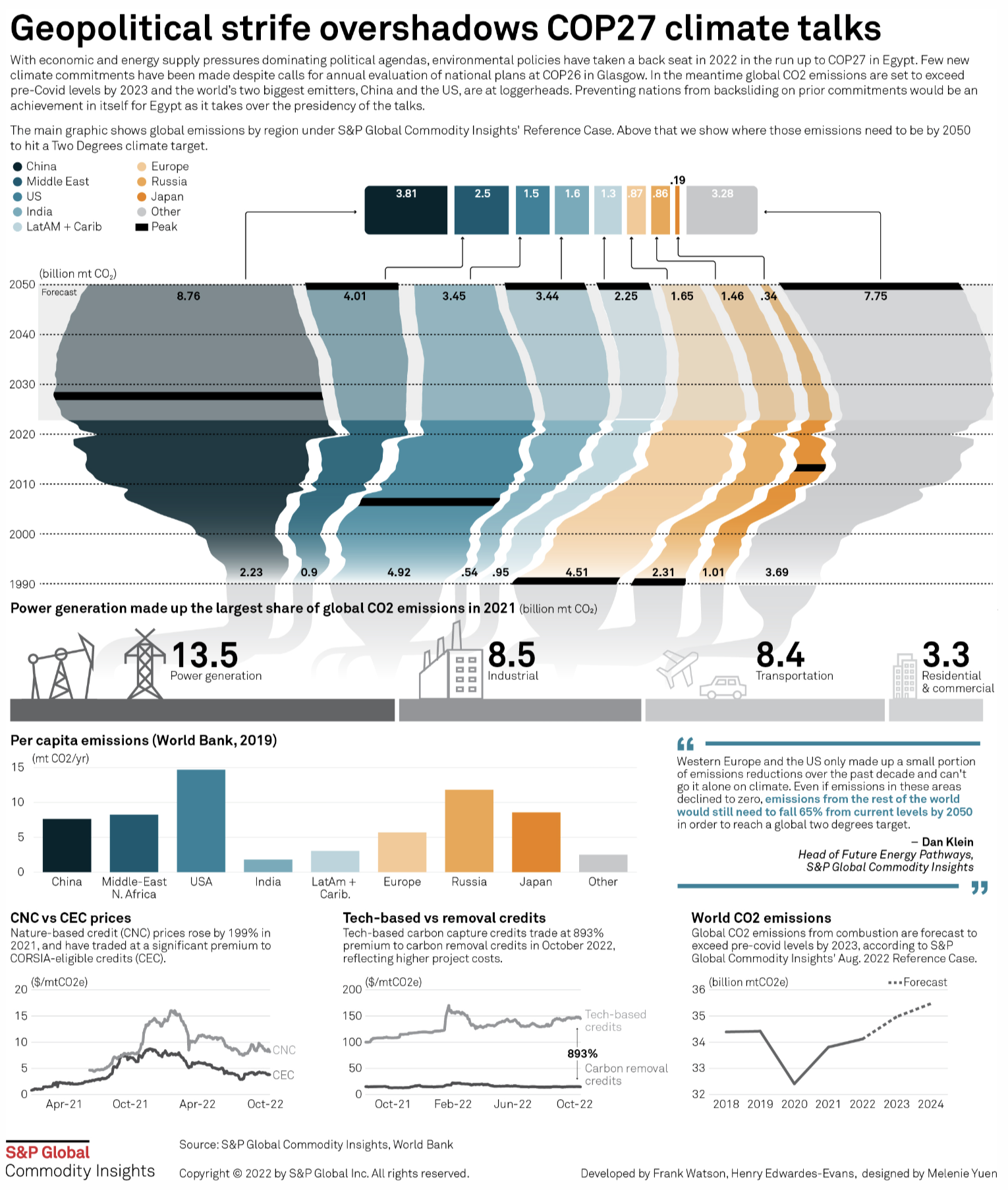 Implementation Constraints Amid The Russia–Ukraine Conflict

COP27 took place on Nov. 6-18. Egypt, the host country, framed the conference as one of actual "implementation" of the Paris Agreement targets, moving away from mere pledges. This is challenging, given the increased economic and security volatility owing to the Russia-Ukraine conflict.

Global climate adjustment is falling behind in meeting the targets of limiting temperature rise to below 2 degrees Celsius — and ideally less than 1.5 degrees Celsius above pre-industrial levels — and reaching net-zero emissions by 2050.

Only 24 countries have reviewed their plans for climate action since COP26 in 2021, and even fewer have made meaningful changes to their emissions targets. Using the current targets, the UN warned on Oct. 26 that temperatures will rise by 2.1-2.9 degrees Celsius by 2050.

At COP27, How To Make Progress In The Face Of Uncertainty

The Sharm el-Sheikh Climate Change Conference in November 2022 in our view did not break new ground, focusing more on impacts than new pledges to reduce emissions. Discussions and initiatives at COP27 focused on the delivery of commitments to deal with climate change and supporting developing economies with related challenges.

India Calls For Phase Down Of All Fossil Fuels, Not Just Coal

India has called for a phase down of all fossil fuels and not just coal in the official "cover text" of the UN Climate Change Conference in Egypt, according to news agency the Press Trust of India.

A spokesperson from the Ministry of Environment, Forest and Climate Change did not confirm or deny the report.

"We mentioned the Intergovernmental Panel on Climate Change's AR6 [sixth assessment] report that recognizes the need for phase down of all fossil fuels," the spokesperson told S&P Global Commodity Insights Nov. 14.

India and China were instrumental in watering down language on coal in the Glasgow Climate Pact last year, removing the call for a phase out and replacing it with "phase down".

"Natural gas and oil also lead to emission of greenhouse gases. Making only one fuel the villain is not right," a source in India's delegation at COP27 told the Press Trust of India.

India's ploy to widen the scope of the text would serve to deflect attention from its own efforts on coal.

"The COP26 language on phasing down coal placed uncomfortable pressure on India, which is one of the largest users of coal in the world by a large margin," said Jonathan Kay, Associate at strategic advisory firm The Asia Group.

"Language on fossil fuels, by contrast, would put the spotlight on a larger number of countries - places that might not use much coal but that still burn a lot of oil and natural gas. That reduces some of the political pressure on India, at least relatively," he told S&P Global.

As the world's top banks set targets to decarbonize their most polluting portfolios, some institutions are opting for metrics that allow them to expand fossil fuel financing, according to environmental and shareholder groups.

Middle East Producers To Defend Oil, Gas, While Grappling With Own Climate Pressures

Hydrocarbons-rich Middle East countries attending the UN Climate Change Conference in Egypt want to steer the narrative on energy security and transition at a time when they are boosting their oil and gas output in a race to avoid having stranded assets as the globe eyes net-zero emissions.

In Sharm el-Sheikh, government representatives, climate activists, and corporations convened for the 2022 United Nations Climate Change Conference, or COP27, in an Egyptian resort town on the shores of the Red Sea to discuss carbon credits and a just energy transition.

U.S. and China agreed to facilitate the success of the ongoing UN Climate Change Conference in Sharm el-Sheikh, Egypt, but key differences between the two largest economies remained.

U.S. President Joe Biden and Chinese President Xi Jinping met in person for the first time in three years in Bali, Indonesia, ahead of the G20 summit.

Official statements released by the White House and China's Ministry of Foreign Affairs Nov. 14 and Nov. 15, respectively, carried different emphases about the meeting but showed that the two leaders seem to have reached a common ground to help repair strained ties.

Biden said the U.S. and China must work together to address transnational challenges — such as climate change, global macroeconomic stability including debt relief, health security and global food security.

President Joe Biden took the stage at the international COP27 summit in Egypt on Nov. 11, announcing hundreds of millions of dollars in new climate investments in the U.S. and overseas.

During his three-hour sweep through the UN Climate Change Conference on Nov. 11, US President Joe Biden underscored the global impacts the Inflation Reduction Act will have on driving down the cost of clean energy beyond American borders.