Europe is now in the midst of a full-blown energy crisis, with prices having surged to new record highs in August and the EU pledging gas and electricity demand curtailments. Reduced European imports of Russian middle distillates has been leading to complications in marine fuel, with a leading testing agency seeing rising demand for lubricity tests to ensure fuel will not damage engines.

Energy in the New Era

This report, published to coincide with S&P Global Commodity Insights’ APPEC 2022 event, explores the interplay between energy transition and energy security, ranging over topics from oil and refining to carbon markets, sustainable shipping and hydrogen.

U.K. multi-utility infrastructure and services provider Fulcrum notified the market Sept. 27 of a cyber security incident on its network after detecting unauthorized activity.

Receive immediate insights on the individual market developments you need to know for a 360° perspective on the big stories shaping our world.

Losses in the Ukrainian banking industry deepened in the second quarter as lenders ramped up provisions for bad loans, a trend that the country's central bank expects to continue amid the war with Russia. For foreign banks still contemplating the future of their Russian operations, President Vladimir Putin's decree banning the disposal of such businesses has complicated matters. There is a silver lining: These subsidiaries are increasingly profitable.

Raiffeisen Bank International AG is still weighing up the options for its Russian business and has not yet set a deadline for a final decision, CEO Johann Strobl said.

Regulators are raising expectations for banks' compliance programs amid concerns that lenders could be breaching U.S. export controls by financing the trade of equipment for military use in Russia through intermediary countries.

The Russian invasion of Ukraine has not only initiated a global humanitarian crisis, it’s given rise to greater risk exposures in capital flows, trade and commodity markets worldwide. Our experts are sensitive to the effect of the conflict on global economies as well as its impact on our community in deep and varied ways.

The weaponization of the US dollar against Russia after its invasion of Ukraine has raised expectations that Beijing will accelerate its de-dollarization efforts, to protect against similar financial sanctions that Washington could deploy against China (mainland). 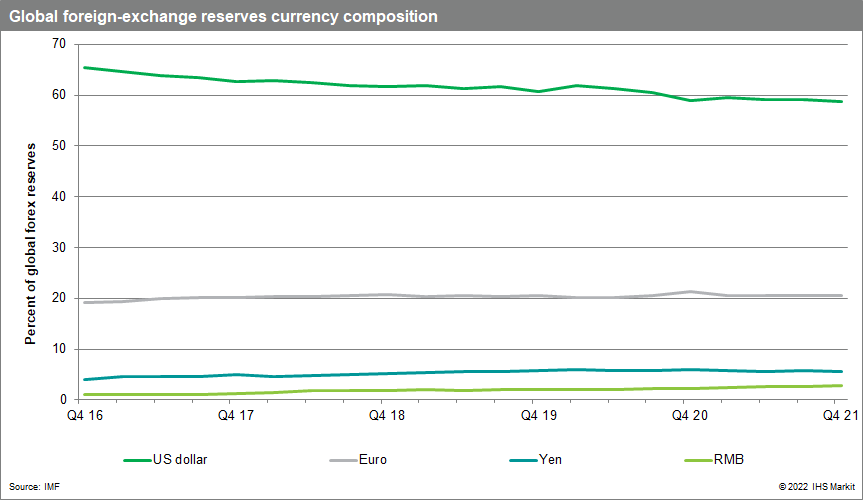 China's ongoing COVID crisis is one of the key events driving commodity markets.

Energy supply diversification to China has been at the core of Russia's eastern pivot, while Russian gas is central to China's energy diversification away from the Middle East and Australia.

Russia's invasion of Ukraine triggered an unprecedented wave of sanctions against Moscow which are still rippling through global commodity markets.

In addition to official sanctions which continue to evolve, major self-sanctioning by industries looking to cut ties with Russia have deepened the market impact. The European Council has adopted the EU's eighth package of sanctions against Russia announced by the European Commission late September.

The European Council has adopted its eighth sanctions package against Russia for its invasion of Ukraine, which expands its ban on the import of Russian steel products to include semi-finished steel, the European Commission said in an Oct. 6 statement.

Russia's declaration of a partial mobilization and plans for occupied areas of Ukraine to hold referenda on joining Russia have raised the risk that Western countries will introduce harsher sanctions.

In response to Russia’s invasion of Ukraine, S&P Global Ratings continues to assess the effect on economies, markets, and credit.

Asia's Appetite, Policy in Focus as World Set to Get Tougher on Russian Oil

Asia's appetite for discounted Russian oil is unlikely to ease soon as buyers scout around for attractively-priced barrels, but uncertainty surrounding EU trade policies as well as questions on China's appetite recovery will keep the markets guessing on volumes well into 2023, speakers and delegates at APPEC by S&P Global Commodity Insights said.

As Russia's recent declaration of a partial mobilization and plans for occupied areas of Ukraine to hold referenda on joining Russia have raised the risk that Western countries will introduce harsher sanctions, delegates said all eyes are on whether more Russian oil gets diverted to Asia.

Russian seaborne crude exports fell to a 12-month low in September as European buyers continued to wind down purchases ahead of the introduction of sanctions, while surging flows into Turkey saw it become the third largest buyer of Moscow's oil behind China and India, according to tanker tracking data.

Commodities show little sign of shaking the bearish momentum amid a slew of economic warnings across the globe. Whether the market wants to push oil much below $90/b amid potential OPEC output cuts, looming Russian sanctions, and the end of SPR releases is the big question. Demand destruction may be met by supply reduction.

Tight oil supplies and relatively high prices are weighing on India's ability to jump on board with US efforts to implement a global price cap on Russian crude, Indian External Affairs Minister Subrahmanyam Jaishankar said Sept. 27.

As the Russia-Ukraine military conflict rages on, S&P Global is continuing to assess the related effects on economies worldwide, the ramifications for financial and commodity markets, and the impact on borrowing conditions and credit quality.

European gas prices surged on Aug. 22 following the announcement late Aug. 19 by Russia's Gazprom that it would close the Nord Stream pipeline completely for three days of maintenance on Aug. 31.

The TTF month-ahead price soared close to Eur300/MWh early Aug. 22, reaching as high as Eur295/MWh at 1200 GMT, on renewed concerns that Nord Stream flows may not return after the work.

The contract was last assessed at Eur247.50/MWh on Aug. 19, according to Platts price assessments by S&P Global Commodity Insights, with prices having hit record highs every day last week.

Prices have been at sustained highs since September 2021, first due to Russian supply constraints and concerns over storage, followed by a surge in prices after the Russian invasion of Ukraine on Feb. 24 and cuts in Nord Stream flows.

Norway is coordinating with its armed forces, police, and oil and gas industry operators as it raises its "emergency preparedness" following sightings of unidentified drones near offshore oil and gas facilities in the North Sea, energy and petroleum minister Terje Aasland said Sept. 27 in an emailed statement.

Back to the Fundamentals: How the Russia-Ukraine War is Driving Power Sector Emissions Lower

Skyrocketing natural gas and coal prices have caused upheavals in the global energy market and caused a crisis that is still ongoing. The public discourse has shifted decidedly to energy security with a focus on ensuring fossil fuel supply.

Following Russia's invasion of Ukraine, S&P Global Commodity Insights looks at the impacts on commodity and energy markets in the region and the world at large.

With Europe's sanctions on Russian coal following its invasion into Ukraine, Asia and Turkey are emerging as direct beneficiaries, highlighting the change in trade flows in the global thermal coal markets six months after the war broke out.

A half-yearly analysis of data from S&P Global Commodities at Sea shows that with Russian coal being offered at a discount compared to the Australian and the South African origin material in the absence of European buyers, countries like China and India have been leveraging it the most.

Four Ukrainian coal mines in Kryviy Rih suspended operations indefinitely on Oct. 10 following a Russian missile strike on the city, according to Oleksandr Vilkul, the head of the city's administration.

Global geopolitics and economic sanctions have European steel rerollers looking for alternative sources of slab, forcing a persistent and long-term adjustment to trade flows that has decoupled the region from its traditional dependence on CIS area supply.

Corn production in the European Union in the marketing year 2022-23 (July-June) is seen falling sharply due to prolonged drought in parts of the bloc, which is likely to open export opportunities for neighboring Ukraine.

Ukraine, for the past two years has been the largest corn exporter to the EU. This year, EU's corn imports have already reached three-year high levels and are likely to remain elevated for the rest of the year as domestic production is seen falling, sources said.

The US Department of Agriculture lowered EU corn production estimate in August to 60 million mt for MY 2022-23, down 15% on the year and 12% lower from the previous estimates. It is also below the five-year average for EU's corn production.

"The 8 million mt cut from is an interim step in our opinion, but it does acknowledge the severity of the situation in the EU," Platts Analytics said in a recent report. Platts Analytics sees EU corn production in MY 2022-23 to be in the range of 55 million-57 million mt.

Ukraine sunflower seed prices have risen by up to 11% since the beginning of September due to delays in the harvest and reluctance from farmers to sell.

The Russia-Ukraine War Is Reshaping The Fertilizer Industry

The effects of the Russia-Ukraine war may reverberate through the global fertilizer industry for years to come. Post-COVID supply-chain disruptions had already pushed fertilizer prices to cyclical highs in 2021.

Russian President Vladimir Putin Sept. 7 called for a review of the UN-brokered deal allowing Ukraine to export agricultural commodities from its Black Sea ports, triggering a spike in the price of corn and wheat futures.

As the Russia-Ukraine military conflict rages on, S&P Global Market Intelligence Insights reports on how geopolitical factors and market volatility issues are affecting businesses across all industries at the local, regional, and global levels.