U.S. Election: Promises, Policy, and the Potential Effects on the Economy and Corporate Credit

S&P Global Ratings analyzed the platforms of President Donald Trump and the Republican party, and Democratic nominee Joe Biden and his party. Among the areas Ratings looked at, the biggest differences were on taxes, fiscal stimulus, regulation, and immigration, while Ratings saw surprising similarities on trade and infrastructure. Given that the U.S. economy is mired in a weak recovery, Ratings believes the single most important task the next president has will be to create jobs, given the unemployment rate is still high, at 7.9%--above or equal to the peak of eight of the past 11 recessions.

The U.S. jobs recovery faces a double drag from the persistence of the pandemic and a lack of additional federal stimulus as the government is set to report the last official unemployment that rate voters will see before the election.

Read the Full Article
Cracking & Fracking: A Review of Each Presidential Candidate’s Energy Platform and What it Means for Credit Quality In this edition of Cracking & Fracking, S&P Global Ratings takes a deep dive into each candidate's energy policy and the potential credit impact on the various energy related sectors and states that have a meaningful energy exposure.
LISTEN AND SUBSCRIBE TO CRACKING AND FRACKING

How Diverging Energy Policies in the U.S. Presidential Election May Affect Credit Quality

The tenets of President Donald Trump's and former-Vice President Joe Biden's energy platforms are in stark contrast to each other and could have vastly different outcomes.

This analysis explores two aspects of the upcoming election. First is the historical record of the immediate price impact of the outcome, with a focus on which party's candidate emerges victorious. The second focus is historical high-yield returns by party during presidential returns. How A Big Election Win For The Democrats Could Affect U.S. Telecom And Cable Companies

S&P Global Ratings believe the biggest risk is the potential for price regulation of cable providers, while the potential for increased funding for broadband provides some opportunities for operators to benefit.

Ratings expects companies and sectors with large overseas earnings would likely see even bigger increases in effective tax rates as more comprehensive taxation of foreign earnings would compound the effects of the domestic tax rate increase.

Corporate taxes dropped for consumer companies, among others, following the passage of the 2017 tax reforms championed by President Donald Trump. A Joe Biden presidency, meanwhile, promises to roll back many of the Trump tax cuts while keeping rates below where they sat under previous administrations.

A complimentary webinar for financial advisors. History suggests that sectors have a greater potential to over- and underperform during U.S. presidential election years, but finding the right sector candidates to endorse can be challenging.

The Trump administration launched its antitrust legal challenge against Alphabet Inc.'s Google LLC this week, but policy experts say federal antitrust legal scrutiny will likely rage on regardless of the election results this November. The U.S. Justice Department filed an antitrust lawsuit against Google on Oct. 20 alleging that the company unlawfully maintained monopolies in the general search, search advertising and general search text advertising markets through "anticompetitive and exclusionary practices." Investors are having to get more creative with their election hedging strategies. With the cost of put options on the S&P 500 as much as 50% more expensive than a month ago, those concerned over the potential for the election to disrupt markets are considering a number of different trades, said Michael Schwartz, chief options strategist with Oppenheimer & Co. "It's all anyone wants to talk about," Schwartz said of conversations he has had with his clients over the past two months. S&P 500 Points to Tight U.S. Election, if History is a Guide

Since 1944, the outcome of the U.S. presidential election could be predicted with a high level of confidence by looking at the performance of the S&P 500 over the three months preceding polling day.

Democratic presidential nominee Joe Biden could end up getting the weak dollar that President Donald Trump craved for much of his first term in office.

Stakes are high across the US energy and commodities sectors as President Donald Trump and former Vice President Joe Biden volley to shape energy, climate and trade policy for the next four years. Biden has called for a swift pivot to clean energy while Trump makes the case for the country's abundant fossil fuel resources. The winner – who may not be known immediately after the Nov. 3 election – will control regulations that could stymie or accelerate growth across energy sectors and markets and help to direct investment. For oil, natural gas, petrochemicals and metals, trade policy also looms large in the election stakes, after Trump's chaotic trade policies reshaped commodity flows.

Biden has proposed an aggressive plan to boost clean energy and reduce emissions to combat global warming, while Trump gives little attention to the issue in his "energy dominance" agenda emphasizing fossil fuel-fired generation. Coal's competitive position would be starkly challenged under either administration, although the election could determine whether strict regulations on mines and power plants are reinstated.

The energy transition underway has already taken its toll on the coal industry. More than 41.5 GW of coal-fired generation has been retired during the Trump administration, while nearly 46 GW of wind and solar projects have come online in that same time frame from 2017 to mid-2020, according to data compiled by S&P Global Platts Analytics. Platts Analytics' expectations for the next few years include a brief rebound in coal and pullback in natural gas, while renewable generation continues to march upwards.

As the US political climate has grown more polarized, the energy sector has faced increasingly significant shifts on the regulatory front every four to eight years, and the industry may have to ready itself for another pendulum swing after the November presidential election.

While federal-level election results remained uncertain the morning after the Nov. 3 U.S. election, a number of state-level races and ballot initiatives with energy industry impacts had been decided.

Host of Energy Issues Settled, but Counting Continues for President

The winner of the White House and control of the US Senate remained unknown early Nov. 4 as mail-in ballots continued to be counted, but implications for energy and commodity markets unfolded in local and state races across the country.

The Trump administration is hoping that a pro-drilling message will give it an edge in the tight race for Pennsylvania votes, with top officials visiting the state and campaign surrogates pouncing on Democratic challenger Joe Biden's comments about transitioning away from oil.

Pace of Energy Transition, Innovation on the Ballot in Presidential Election

The US appears headed for a clean energy future regardless of who sits in the White House. But the pace of the energy transition – and presumably the severity of ensuing climate change impacts – could look dramatically different depending on the victor of the Nov. 3 presidential election.

The energy transition underway has already taken its toll on the coal industry. More than 41.5 GW of coal-fired generation has been retired during the Trump administration, while nearly 46 GW of wind and solar projects have come online in that same time frame from 2017 to mid-2020, according to data compiled by S&P Global Platts Analytics. Platts Analytics' expectations for the next few years include a brief rebound in coal and pullback in natural gas, while renewable generation continues to march upwards.

If Joe Biden wins the U.S. presidency in November, he could hasten the country's migration to more renewable energy by enforcing the Paris Agreement and the energy chapter under the U.S.-Mexico-Canada Agreement. Should this happen, Mexico may have to rethink its own current hydrocarbon-focused energy strategy.

While control of the White House and US Senate waits for ballot counters, a host of implications for energy and commodity markets from the Nov. 3 elections unfolded across the country, revealing a deepening US divide on energy issues that will make it harder to pursue federal policy on decarbonization and mitigating climate change.

President Donald Trump has officially withdrawn the U.S. from the Paris Agreement on climate change, a move Democratic presidential candidate Joe Biden has said he would reverse if he wins the election.

Life After the Elections

The results of the U.S. elections on November 3 could radically alter trade policies and their impact on supply chains no matter who wins, with both the up- and down-ticket races making a difference.

The closest area of similarity between President Trump and former Vice President Biden is in the two candidates’ focus on employment and geopolitics as drivers of trade policy. Both Biden and Trump have clearly stated tough-on-China stances.

While much of the focus has been on the Executive, the makeup of the House and Senate will also have a critical impact on the direction of trade policy. A divided House and Senate has not prevented the Trump administration from enacting most of its trade policies, using a mix of executive action as well as limited large scale trade deals (USMCA, KORUS) with careful negotiations and mini-deals that skirt the need for Congressional approval. 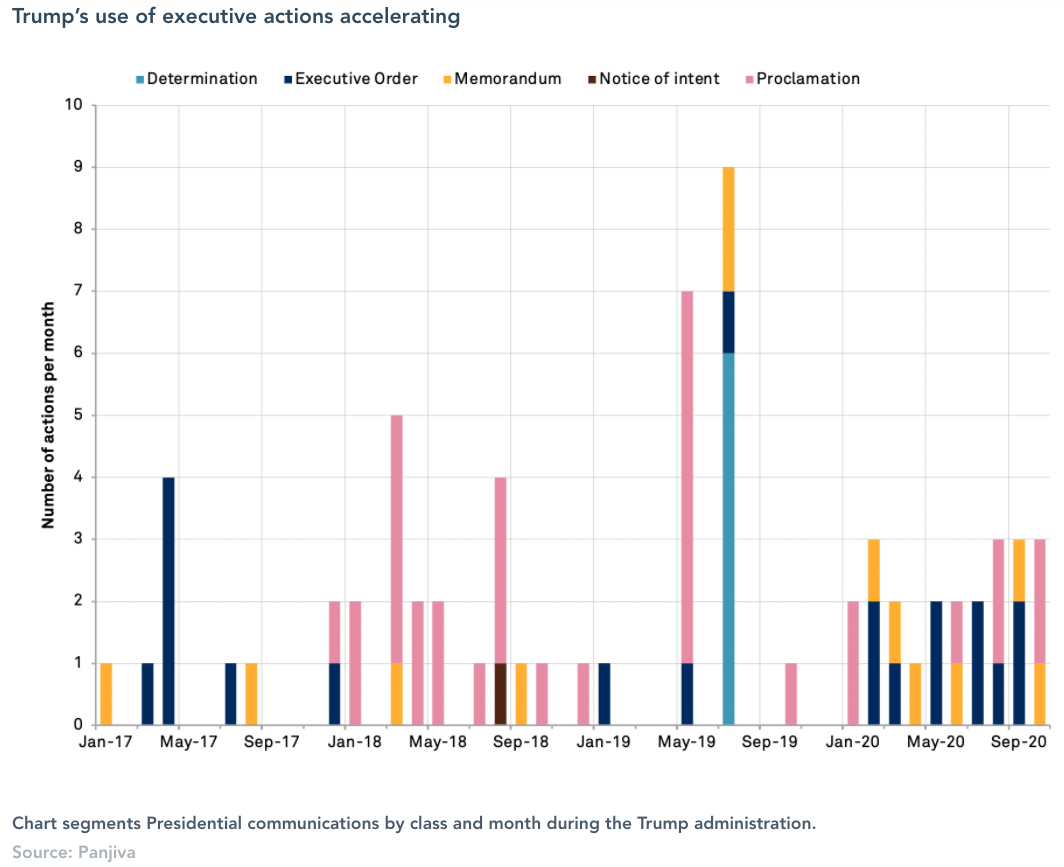 A new president may not mean a new day in trade relations between the U.S. and its largest trading partner, the EU. Democratic presidential nominee Joe Biden has expressed a desire to work with allies to repair rifts widened under the protectionist trade policy of the Trump administration. Smoothing fractured relations with the EU, a bloc Washington did $851.9 billion in goods trade with in 2019, would likely be a central pillar of this effort under a Biden presidency.

China has slowed down its buying of U.S. agriculture products in recent weeks and remains in a wait-and-see mode ahead of the outcome of the U.S. presidential election, but the country's grain buying is expected to continue in the long run as it looks to diversify its sources.

European and the Middle East steel markets are increasingly pricing in a Democratic win in the Nov. 3 US presidential elections, according to regional trading sources consulted by S&P Global Platts Nov. 2.

More of our Coverage

– Cyber Risk: The Other Virus Threat – Coal in Retreat – Airlines Brace for COVID-19 Impact – ESG Monthly: Innovations in Sustainable Finance – Hydrogen on the Horizon – Loan Loss Provisions: How Banks are Navigating the Crisis – Weak Links in the Supply Chain