This report brings together Panjiva’s analysis of the impact of the coronavirus outbreak on healthcare supply chains, including analyses from over a dozen reports as well as up-to-date data from the first three weeks of U.S. seaborne import data in March. The full range of Panjiva’s coverage of the coronavirus outbreak and its impact on healthcare can be found on a dedicated microsite here.

Aside from a surge in demand and shortage of medical supply manufacturing, one of the biggest issues for supply chains in healthcare so far has been the spread of medical protectionism. There’s no shortage of restrictions with a World Trade Organization review showing 11 countries plus the EU and SACU applying export restrictions.

The EU export certification requirements for medical protective equipment, discussed in Panjiva research of March 18, require a 10 day delay which at the least will increase paperwork and at the worst could lead to a drop in exports. 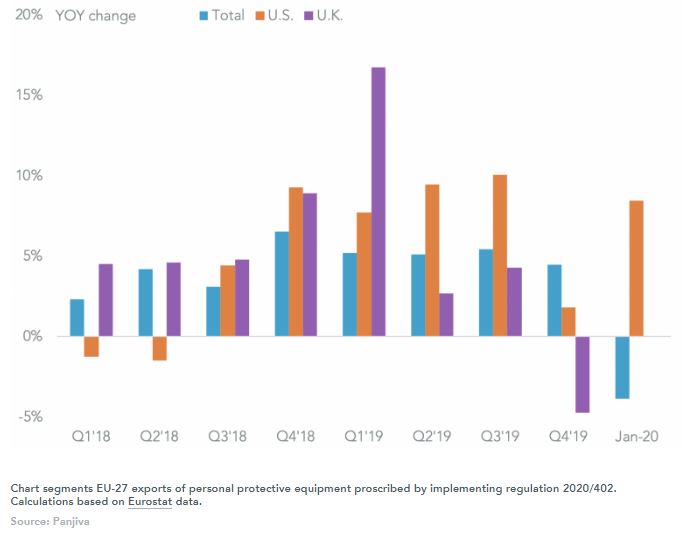 The G20 heads-of-state meeting has committed to “minimize disruptions to trade and global supply chains” caused by the coronavirus outbreak. Encouragingly there is a commitment to ensure medical supplies are delivered “where they are most needed” and “work to ensure the flow of vital medical supplies, critical agricultural products” across borders.

While that may address the export restrictions that have spread widely there’s a caveat that “emergency measures aimed at protecting health will be targeted, proportionate, transparent, and temporary“.

The latter may provide a loophole for a continuation of export barriers, though there are signs that the Indian government – which applied export barriers to 13 drugs and vitamins – may abolish some restrictions according to Reuters.

On the other side of the protectionist coin several countries have been cutting tariffs and launching single buyer programs. Brazil and China have already cut tariffs on medical supply imports. China’s covers shipments from the U.S. that were worth as much as $2.26 billion in 2019.

Similarly in the case of the U.S. there have already been two phases of exemptions from tariffs on imports from China granted which has helped suppliers including Cardinal Health and Medline among others across personal protective equipment as well as waste handling supplies.

There are still a wide selection of tariffs that are still in place that could be removed to cut medical supply costs including tariff applications outstanding from American Scientific.

Even if barriers are removed though there are still challenges for sourcing. Malaysia’s lockdown may lead to a shortage of rubber global supplies from firms including Top Glove.

There are also informational barriers. The head of the U.S. Federal Emergency Management Agency, Rear Adm. John Polowczyk has stated that he is “blind to where all the product is“, Axios reports. That’s requiring a huge information gathering exercise on FEMA’s part.

Yet, there are moves afoot though to ensure the right products get to the right place, with Flexport providing a service that ensures medical supplies only go to medical users.

Panjiva’s data for U.S. seaborne imports shows the rate of decline in shipments of basic PPE. Imports of masks have fallen fastest with a 70.5% year over year slump in the first three weeks of March compared to a year earlier. That followed a 13.5% drop in February and a 3.1% slip in January.

Imports of protective gloves meanwhile fell by 54.9% in the first three weeks of March and those of eyewear dropped 45.2%. It’s worth noting that part of the drop may reflect accelerated shipments by air, though the first major action in “Operation Airbridge” did not occur until after the sample period. 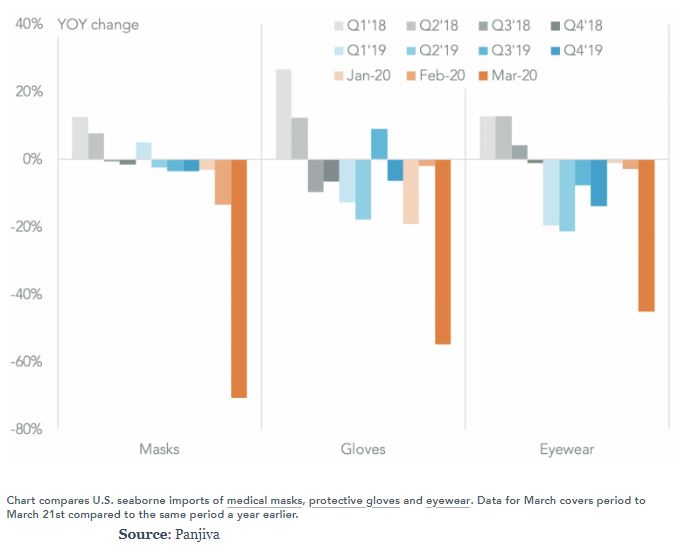 The supply of medical equipment may prove more intractable. Even without the trade restrictions, many countries are struggling in particular to secure access to medical ventilators, the BBC reports.

The U.S. has launched the Defense Production Act in an attempt to boost supplies from non-medical manufacturers which already includes General Motors and may be extended to a wide-range of industrial firms.

Yet, existing device manufacturers including Drägerwerk have expressed some scepticism regarding the timeframes and effectiveness of governmental plans to source ventilators from other manufacturing businesses.

Complications are not limited to equipment though – even if ventilators can be sourced there still the challenge of the availability of drugs used for patients who are using them according to the Financial Times.

The flow of ventilators and parts to the U.S. has also slumped in the first three weeks of March, with a 33.5% year over year drop in total shipments and a 39.7% slide compared to the daily average for the fourth quarter. Unsurprisingly that’s been led by an 84.7% slide in shipments from China in March versus Q4 as well as a 59.4% drop in shipments from the rest of the world excluding Singapore.

SINGAPORE SURGE INSUFFICIENT TO OFFSET LOSS OF VENTILATORS FROM CHINA, OTHERS 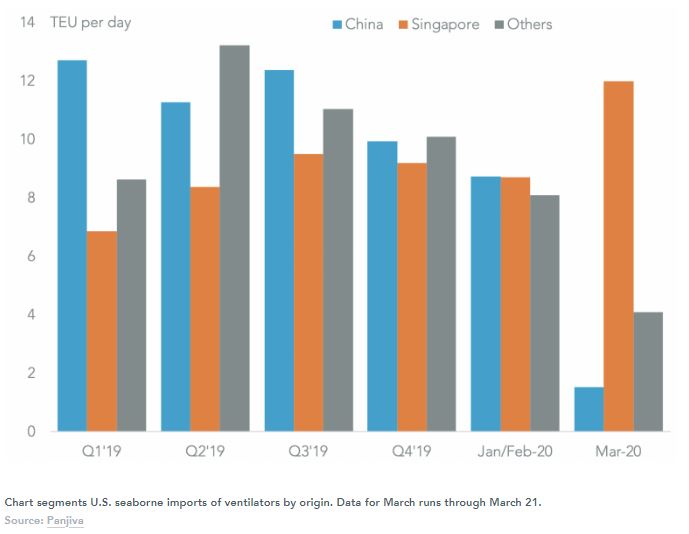 While more complex and experimental drugs with short shelf lives can move by airfreight – which has become more expensive – the bulk of generic pharmaceuticals still ship by sea. One issue is that supplies from India may be disrupted by the national lockdown which threatens to disrupt both manufacturing and logistics activity.

U.S. seaborne imports of pharmaceuticals have yet to see as significant a downturn as for devices or PPE however. Total shipments of pharmaceuticals and their precursors fell by just 3.9% year over year in the first three weeks of March, compared to a 2.6% dip in February and 12.5% slide in January. Shipments from India and China have actually increased in March, while those from Europe have fallen by 12.9%.

PHARMACEUTICAL FALL DUE TO EUROPE WITH INDIA, CHINA ROBUST IN MARCH 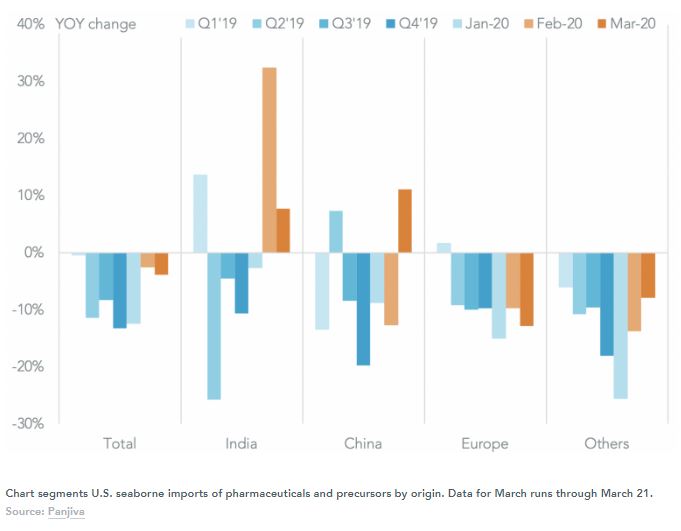