Ten years into the digital lending revolution in the U.S., signs of a maturing industry are starting to show. We expect the sector's growth to be slower over the next five years as lenders look to build sustainable and profitable businesses focused on quality borrowers.

A new report by S&P Global Market Intelligence projects that digital lenders across the personal, small and medium enterprise, and student-focused segments will originate $62.84 billion in new loans in 2021. This represents a compound annual growth rate of 16.5% during the five-year period ending December 31, 2021. These estimates encompass originations from 15 of the most prominent lenders in the space. 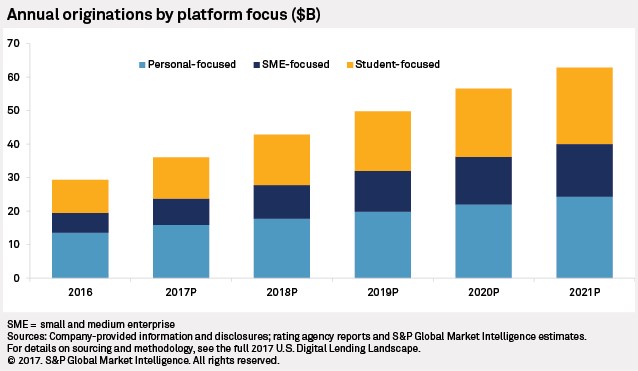 Digital lending in the U.S. traces its roots back to the launch of Prosper Marketplace Inc. and LendingClub Corp., which allowed individuals to lend money to others on a peer-to-peer basis. Since then, banks and other institutional investors have become the primary source of capital for these lenders.

SME-focused lenders are projected to grow the fastest over the next five years, with an estimated CAGR of 21.5% for the five-year period ending December 31, 2021. We have seen rapid acceleration in products offered by payments companies PayPal Holdings Inc. and Square Inc. These companies largely target users of their payment processing platforms, offering loans to businesses with strong sales over a given period.

Student-focused lenders remain the most diversified platforms in the digital lending sector. Product offerings in this segment include student loan refinance, direct student loans, personal loans, and even wealth management and mortgage products. We estimate that student-focused lenders will originate $22.83 billion in new loans in 2021, growing at a CAGR of 18.4% during the five-year period ending December 31, 2021.

As SME and student-focused lenders continue to grow at a faster rate, we predict a shift in the origination mix for the sector. While personal lenders originated 46.3% of the sector's loans in 2016, we see that falling to 38.7% in 2021. Overall, by the end of 2021, we estimate that the digital lenders in our analysis will have originated a cumulative $391.12 billion in loans since their respective inceptions. 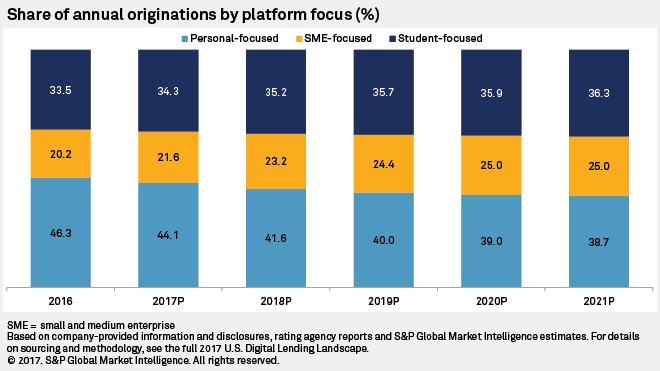 Amid sector-wide concerns and declining originations in 2016, venture funding dried up for many platforms. In 2016, $50 million was raised between CommonBond Inc. and College Ave Student Loans, representing a 97.8% decline from the $2.23 billion raised by various digital lenders in 2015. Activity picked back up during the first three quarters of 2017, with $862.5 million raised between Upstart Network Inc., Prosper, Kabbage Inc., Social Finance Inc., and College Ave. These were primarily later stage rounds, reflecting the maturing sector.

In November, Navient Corp. acquired student-focused lender Earnest for $155 million. The platform will continue to operate under the Earnest name, but under the Navient umbrella it could offer new products such as undergraduate student loans. 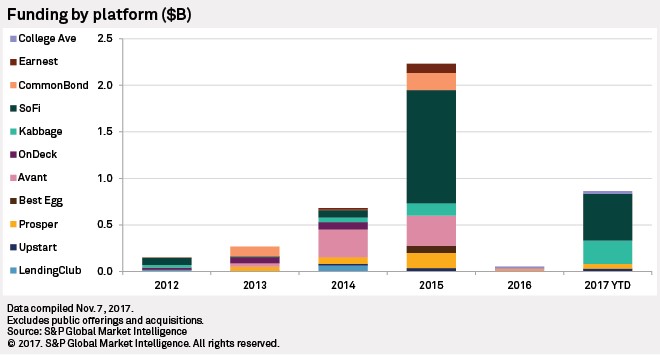 There are promising signs of sustainable growth and increased investment in the digital lending sector. Looking toward 2018, it will be important for digital lenders to receive more clarity around regulation. The special purpose charter proposed by the Office of the Comptroller of the Currency in late 2016 is a signal that regulators understand the unique needs of the industry. Still, questions remain around what regulation will look like, and another high-profile CEO departure in 2017 did little to promote the industry’s image. Over the past decade, digital lenders have shown that they are capable providers of capital, and it is now time to prove the industry can last for the next 100 years.