The Downs and Ups of Latin American Markets – April 2020 Review


The Downs and Ups of Latin American Markets – April 2020 Review

Investment in Latin America’s equity markets is not for the faint of heart—now more than ever. In the first quarter of 2020, all markets in the region were significantly negative, plagued by recent events. While April has swung markets back to positive territory, we are still far from the proverbial “light at the end of the tunnel.”

In the midst of the continued global pandemic, many countries have started to ease restrictions, as presumed cases of COVID-19 and mortality rates have lowered. This has led to talks of “reopening” economies, infusing investors with courage and optimism—even if it is short lived. With the highest number of recorded COVID-19 infections and deaths globally, the U.S. will look to May 2020 with cautious hope. The million dollar question is when it will be safe for consumers to return to stores and restaurants and to resume travel. Even after businesses and services are fully reopened, many may not have the financial means to participate. In fact, there are already reports of increased debt, credit defaults, and bankruptcies at the business and personal level.

S&P Global Ratings recently reported that credit conditions in emerging markets were worsening. In the latest report,[1] 2020 GDP growth forecasts for Latin America were substantially revised downward. Latin America GDP is expected to fall about 5% in 2020 and a recession is forecast across the region. Economists predict that countries like Chile, which quickly implemented social-distancing policies and offered strong economic stimulus, could have a robust recovery and stand out among its peers. Meanwhile, Mexico and other countries, which delayed public health policies and offered limited stimulus programs, may see weak recoveries. Brazil will most likely be somewhere in the middle.

For now, let’s bask in the latest positive monthly returns for the region. April brought a ray of sunshine to equity indices, as promising treatments and development of vaccines to combat COVID-19 are on the horizon. The S&P 500® was up 13% for the month, while the S&P Latin American BMI gained nearly 7%. The S&P Latin America 40, which measures the largest, most liquid stocks in the region, gained 5.2%. Among the larger countries, Chile’s S&P IPSA gained 14%, while the S&P Brazil LargeMidCap returned 10%, and Mexico’s S&P/BMV IPC gained nearly 6%. However, none of the country indices gained as much as Argentina’s S&P MERVAL Index, which returned a whopping 34.3%. Despite April’s strong performance, most indices were still in the red YTD. Given all the uncertainty in the markets, continued high volatility is still expected for the rest of the year.

Despite the pandemonium, some indices are standing out from the pack, highlighting how their methodologies function under extreme market conditions. In Mexico, the S&P/BMV IPC Inverse Daily Index, which provides the inverse performance of the S&P/BMV IPC on a daily basis, was up 15.5% YTD. The S&P/BMV IRT Risk Control Indices, which reduce their exposure to equity when volatility rises above pre-defined thresholds (i.e., 5% or 10%, annualized) have outperformed the benchmark.

The S&P/BMV Mexico Target Risk Indices were also winners, thanks to their partial inclusion of fixed income exposure. The series comprises four indices that combine varied levels of equity and fixed income, ranging from conservative to aggressive allocations, while adhering to the constraints of the investment regime of the local pension funds.

The S&P/BMV Ingenius Index seeks to track some of the world’s largest, most innovative, tech companies, which have generally proven to fare well during this pandemic, and seemed to capture this trend YTD. The S&P/BMV China SX20 Index, which is designed to measure separate international stocks trading on Mexico’s BMV, continued to do well largely due to the recent depreciation of the Mexican peso relative to the U.S. dollar. The S&P/BMV MXN-USD Currency Index, which aims to track the change between the currencies, also performed well YTD (see Exhibit 4). 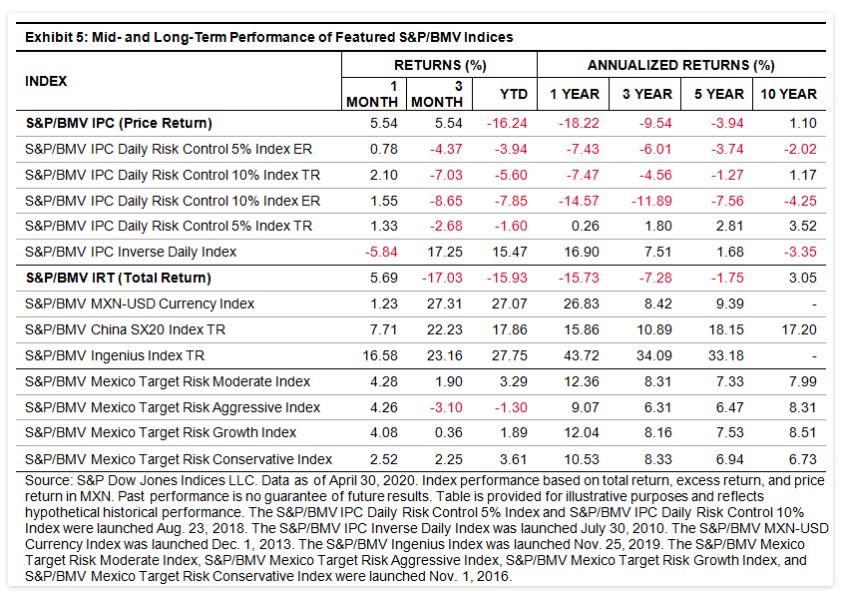