The global oil market is brimming with a smorgasbord of crudes, from the Canadian tar sands extracted with the help of steam and sand, to the lightest US condensates whose color mirrors a glass of fine white wine.

Each crude stream possesses its own unique characteristics, and when refined yields varying proportions of different refined products. Understanding crude quality has never been more important, following the dramatic rise in US shale output, which has transformed the composition of the global oil market.

To reflect this change, S&P Global Platts created a periodic table of oil cataloguing 120 of the most important grades on international markets. Here are some of the grades that have recently come to the fore in a turbulent year for the petroleum supply chain. 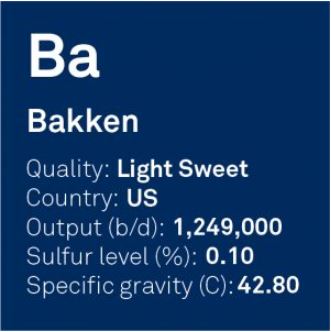 The US crude oil production boom over the past decade has drawn attention to West Texas and its flagship grade WTI. However, the Bakken-Three Forks formations of North Dakota and Wyoming, often lumped together as “Bakken,” also produce a significant amount of light sweet crude that makes its way to refineries in the US Midwest and US Gulf Coast, and occasionally into the global market.

The field produces almost 1.5 million b/d of Bakken, a light sweet crude that typically has a gravity of between 41-43.7 API and a sulfur content of 0.12%. Its importance in both the domestic and international markets has grown significantly since the startup of the Dakota Access Pipeline (DAPL) and its southern leg, the Energy Transfer Crude Oil Pipeline (ETCOP) in June 2017.

Together, these form a 570,000 b/d system that moves oil from the Williston Basin up near the US border with Canada, all the way down to the Texas Gulf Coast at Beaumont and Nederland. Bakken trades relative to NYMEX WTI from its point of origin down to the pipeline’s terminus. Along the US Gulf Coast, it averaged around a $4.50/b premium to NYMEX WTI in 2019.

Light sour crudes boast a high fuel oil and gasoil content but are also very high in sulfur. They normally trade at a slight premium to the Platts Dubai sour benchmark.

Crudes that are both light in terms of gravity and high in sulfur are a rarity, and Murban – produced onshore from the Abu Dhabi emirate of the UAE – is one of the biggest streams of such oil. Due to its burgeoning production and popularity among Asian refiners, Murban is emerging as a key Middle East crude benchmark. 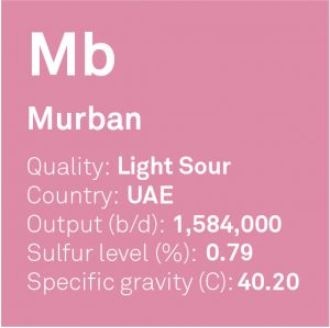 The crude accounts for more than half of UAE production at around 1.6 million b/d on average, and is one of the major streams in the Middle East with a large spot market.

The Abu Dhabi National Oil Company and Intercontinental Exchange are set to launch a futures contract for Abu Dhabi’s flagship Murban grade in the first half of 2020.

A surge in arbitrage flows into Asia, as well as rising US crude exports, have raised competition for Middle East producers at a time when Asian refiners are striving to diversify their crude sources.

Murban is also a deliverable grade in the Platts benchmark Dubai and Oman crude assessment process. At least 40% of Murban onshore production is freely traded, according to industry sources. The grade is exported from Jebel Dhanna and Fujairah.

Medium sweets are very attractive to both simple and complex refineries due to their high middle distillate yields, and are generally priced at a premium to Platts Dated Brent. 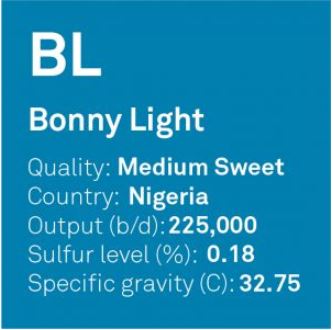 crudes in the world due to its high gasoline content. Produced onshore in Nigeria’s oil-rich Niger Delta, it is very popular with refiners globally. Production has averaged around 250,000 b/d recently.

India, the main driver of oil demand growth, is the largest buyer of this Nigerian grade.However, militants in the Niger Delta have caused disruptions to pipelines, regularly targeting the key infrastructure tied to the crude and export flows.

Bonny Light crude loadings have been under force majeure on three separate occasions in the past 12 months due to pipeline leaks caused by attacks by militants.

Many Nigerian crudes are either light or medium sweet, yielding generous amount of diesel, jet fuel and gasoline, making them more expensive than sour crudes. Crudes like Bonny Light are now competing with US shale, due to the quality similarities, and this has greatly altered the direction of crude flows globally.

Medium sour crudes form the staple diet of complex refineries. They generally trade at a discount to Platts Dated Brent but recently prices for some grades have strengthened due to the supply tightness of such crudes globally. 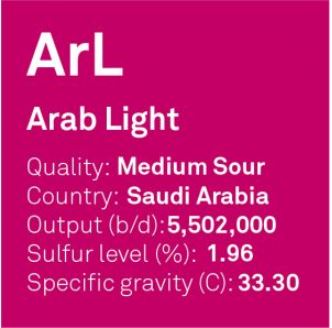 Arab Light is the key export grade for Saudi Arabia, the world’s largest exporter of crude. This crude is a mainstay of the main Asian refining hubs of China, India, Japan and South Korea, making it very significant for the world oil market.

Despite being a high-sulfur crude, it boasts a medium-gravity API, making it a well-rounded grade for refiners to process. When refined it produces a wide variety of products, especially for those with complex processing units.

Arab Light is mainly produced from the giant Ghawar and Khurais fields, but it also contains volumes from other fields. The Saudi grades most affected by attacks on the country’s oil infrastructure in September 2019 were Arab Light and Arab Extra Light.

The Abqaiq facility, which was damaged in the attacks, helps process Arab Light and also Arab Extra Light. The Abqaiq plant has the ability to depressurize, desulfurize, and de-gas crude production, making it safe for pipeline transport.

Heavy sweets are traditionally priced at a discount to Platts Dated Brent but their popularity has broadened. They became more valuable ahead of the IMO 2020 sulfur cap due to their very low sulfur content. 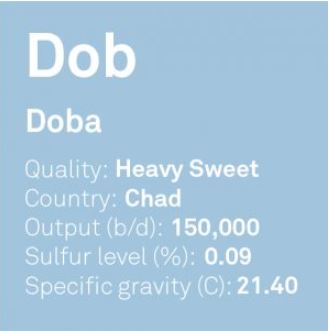 Named after a city in southern Chad where vast amounts of oil was discovered, this crude has emerged as one of the coveted barrels as demand for cleaner fuels grows.

Doba’s demand used to be limited to complex refiners due to its extremely acidic profile, but its quality has changed over the years due to new fields Badila and Mangara coming on stream. This change in quality has broadened the customer base for Doba. The crude’s appeal increased sharply ahead of the IMO 2020 sulfur cap due to its fuel oil-rich but low-sulfur content, which makes it an ideal grade for producing marine gasoil.

This crude is finding homes in refineries all over the world and has been particularly popular in the storage hubs of Fujairah and Rotterdam, where the crude is processed at topping facilities to make IMO-compliant fuel oil. The price of Doba has risen dramatically as a result.

Crude differentials for this grade reached a record high of Dated Brent plus $1.65/b in late September, according to Platts data. Around four years ago, Doba was trading just below Dated Brent minus $8.00/b.

Doba production has also risen over the year with production averaging around 150,000 b/d,  compared to levels of around 80,000 b/d six years ago. Oil from landlocked Chad is pumped via the Kome-Kribi (Doba) pipeline to the coast of Cameroon, where it loads at a terminal around 10 km offshore.

Heavy sours are popular with complex refineries as they can be tough to refine due to their high sulfur content. They are priced at a significant discount to light crude benchmarks such as Platts Dated Brent or the NYMEX light sweet crude futures contract. 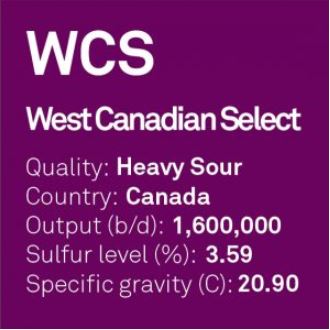 Select is a select blend of heavy sour material produced in – you guessed it – Western Canada. There is no true production of WCS. Like the US grade WTI, WCS is a blended barrel, meaning its supply is based upon and controlled by the inputs available plus pipeline space and economics.

The primary consumers of this heavy sour crude are US Midwest and US Gulf Coast refiners, which have sufficiently complex plants to process it and enjoy the significantly depressed prices at which WCS trades.

Why are WCS values so low? Essentially, the crude is land-locked. There is more crude production in Western Canada than there are avenues to export it, which causes its price to fall to levels where rail cars are used to help clear the glut.

A shortage of heavy sour crude – brought on by OPEC+ cuts, declining Mexican output and sanctions on Venezuela and Iran – has increased the global interest for WCS. However, so far, US Midwest and USGC refiners have maintained a consistent appetite for WCS, preventing large-scale exports.