Yesterday, S&P Dow Jones Indices announced that Tesla will be added to the S&P 500® prior to the open on Monday, Dec. 21, 2020. The Index Committee has not yet determined which current constituent Tesla will replace, nor how Tesla will be added to the index—because of its size, S&P DJI is seeking feedback through a consultation to answer the latter question. Still, the announcement highlights the importance of understanding the impact of index construction and index implementation.

Here is a brief overview of the S&P U.S. Indices Methodology document, some information to contextualize Tesla’s addition, and what impact it may have on the market.

The S&P 500 is widely regarded as the best single gauge of large-cap U.S. equities, with more than USD 11.2 trillion indexed or benchmarked to the index as of December 2019. But while it is synonymous with U.S. equity market performance, the S&P 500 does not necessarily comprise the largest 500 U.S. companies.

Instead, our equity indices methodology identifies several eligibility criteria that new index additions must meet, including, but not limited to, market capitalization and liquidity thresholds, along with a history of positive earnings. Exhibit 1 provides an overview of these requirements.

Satisfying the eligibility rules does not guarantee index addition: the Index Committee takes into account several factors when considering constituent changes to the S&P 500, such as sector representation and index turnover. These constituent considerations—and indeed any resulting changes—are made on an ongoing, as-needed basis rather than on a set frequency. 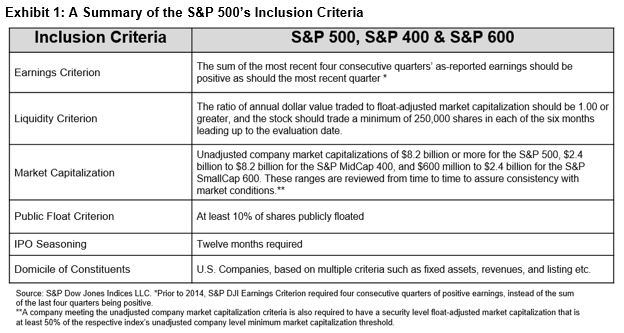 Tesla’s float market capitalization of USD 304 billion (as of the close on Nov. 16, 2020) would make it the largest S&P 500 addition ever. Indeed, it is currently around two and a half times larger than Berkshire Hathaway (USD 127 billion) and nearly three times larger than Facebook (USD 90 billion) when they were added in February 2010 and December 2013, respectively. 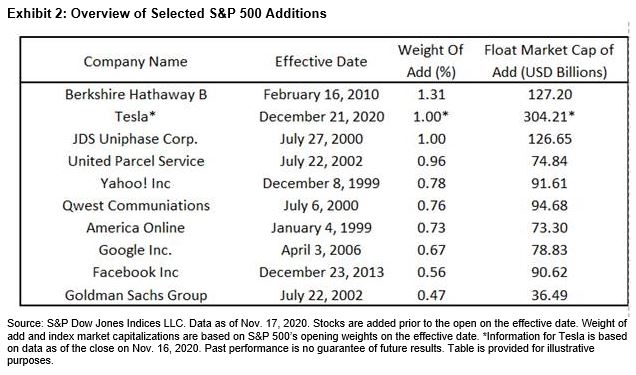 Importantly, the growth of the S&P 500’s market capitalization over the last decade—from USD 9 trillion to around USD 30 trillion today—means that Tesla’s weight upon addition (1%, using Nov. 16’s close) would be less than Berkshire Hathaway’s 1.3% index weight when it was added. 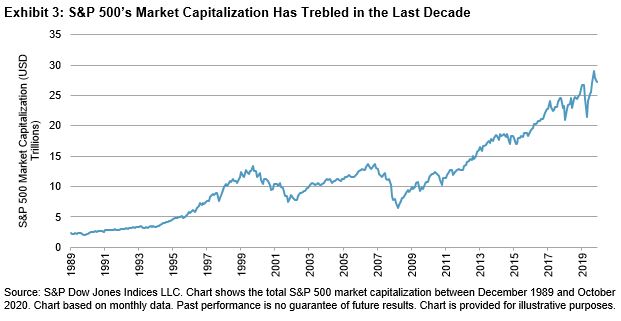 From a sector perspective, Tesla’s addition is also likely to increase the weight of Consumer Discretionary in the index and help to alleviate the benchmark’s sensitivity to the Information Technology sector. For example, assuming all of Tesla were included at once, as of Nov. 16’s close the Consumer Discretionary sector would be 12.08% of the S&P 500 (this figure is based on the S&P 500 having 501 companies instead of its usual 500—the stock Tesla will replace in the index has yet to be announced by the Index Committee).

The potential change in the distribution of weights within the Consumer Discretionary sector—Tesla would currently be the second-largest sector constituent—may also reduce the sector’s sensitivity to Amazon.