Source and scale are biggest challenges as hydrogen interest grows


Source and scale are biggest challenges as hydrogen interest grows

Hydrogen is a fuel for the future, but its use is already well established. In order to harness its full potential to decarbonize energy systems and create a real hydrogen economy, industry and governments will need to scale up investments to move the market forward, write Jeffrey McDonald and Andrew Moore.

Japan is dreaming big that hydrogen derived from coal in Australia will help it lower its carbon emissions.

Hydrogen is not without its challenges. It is already widely used in industry, and nearly all hydrogen today is produced from fossil fuels. But using carbon capture and storage (CCS) technology could mitigate emissions in such production, while other methods using renewable energy would emit zero CO2.

The Hydrogen Council believes hydrogen can address 18% of global energy demand and abate one fifth of carbon emissions. But it won’t come cheap. Scaling up the hydrogen economy will take investments of $20 billion-$25 billion each year through through 2030, the council says.

Compared with other commodities, there is not much of a market for hydrogen. Trade is localized, and takes place between supplier and end user based on bilateral transactions, with little chance for price discovery.

Currently, roughly 95% of hydrogen is produced on-site. For example, refiners will contract with a hydrogen supplier to build a hydrogen production facility on the refining site, to produce so-called “on-purpose hydrogen.” 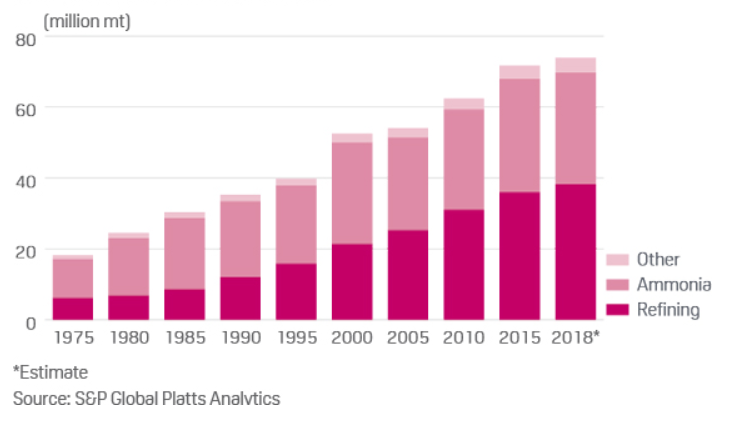 Hydrogen not produced on-site is transported as a compressed gas either via dedicated pipeline or truck (typically for the transportation market).

As the world pursues decarbonization, hydrogen is likely to play an important role, though cost and greener production methods will present challenges.

Hydrogen does not exist alone in nature. Rather, it combines with other elements to form well-known compounds such as water, natural gas and petroleum.  Once separated, hydrogen is a colorless, odorless and highly combustible diatomic gas with the molecular formula H2.

The overwhelming majority of hydrogen is currently produced from fossil fuels, including natural gas and coal, using a process called steam methane reforming (SMR). A downside to this process is that it emits carbon dioxide as hydrocarbons are broken up. The CO2 emissions could be mitigated with CCS, but that is not standard industry practice at present.

“There is no real market for CCS [produced hydrogen],” one industry source said. “What is needed is a clear CO2 price, or regulation or mandates for lower carbon solutions. We are not there yet.”

Go deeper: Podcast – An emerging market for hydrogen in the US

Hydrogen produced through SMR without CCS is sometimes referred to as “grey” hydrogen, whereas that produced with CCS is known as “blue” hydrogen.

There are no carbon dioxide emissions, and when paired with electricity from renewables, the process helps solve two key problems with wind and solar generation: curtailment and energy storage.

S&P Global Platts Analytics Scenario Planning Service estimates that a shift to zero-carbon hydrogen in existing applications along with modest penetration in gas pipelines and commercial trucking could reduce global energy-related CO2 emissions by over 7%.

Go deeper: Alternative transport and the US road freight sector

Replacing an additional 5% of global fossil-fired power generation with hydrogen-fired generation could increase emissions reductions to 9% globally, or over 2.8 billion mt CO2.

To give an idea of the scale of growth that could be achieved under these scenarios, global demand for pure hydrogen could increase from around 70 million mt today to 185 million mt-255 million mt H2/year.

GLOBAL POTENTIAL FOR HYDROGEN USE 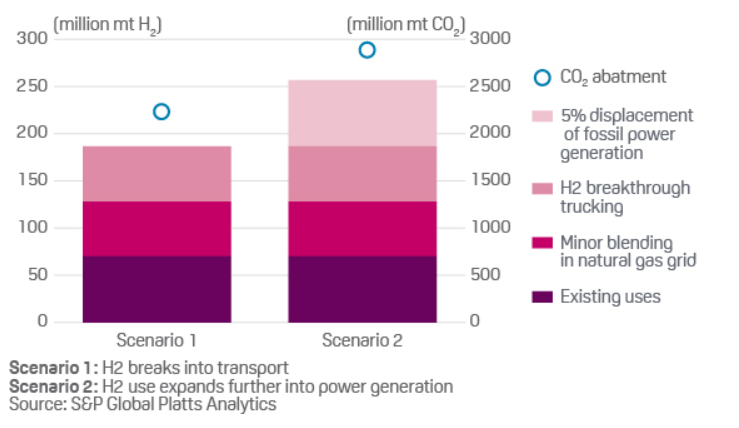 With this growth expected, S&P Global Platts is launching its first-to-market suite of hydrogen price assessments, which model the cost of production.

The assessments reflect the value of hydrogen produced at hubs in the US and Europe that are significant regions of consumption: California, the US Gulf Coast and the Netherlands.

Current hydrogen use is centered around oil refining and ammonia and methanol production.

Refiners use hydrogen to lower the sulfur content of fuel, and this use is expected to increase, according to the International Energy Agency’s 2019 report, “The Future of Hydrogen.”

The International Maritime Organization’s new bunker fuel regulations limiting sulfur content of marine fuels to 0.5% starting January 1, 2020, are also expected to lead to a “significant increase” in hydrogen use for marine fuel production, the IEA said.

Global ammonia producer Yara has seen a 30% drop in gas consumption and a reported reduction of 10 ktCO2/year in carbon emissions since it began receiving hydrogen at an ammonia plant in the Netherlands. Yara is also assessing the feasibility of integrating electrolysis-based hydrogen into its Australian operations, according to the IEA.

Steelmakers, who account for 7% of global CO2 emissions, are also considering ways to use more hydrogen to lower carbon emissions, particularly in markets such as Europe where carbon costs continue to rise.

One company, SSAB, is converting operations from  blast furnace to electric arc furnace fuelled by hydrogen to reduce iron ore. SSAB expects fossil-free steelmaking to be commercially viable by 2035.

Power generators, the transportation sector and manufacturers of building materials, such as cement, also have an eye on hydrogen.

Due to its relatively simple chemical structure, hydrogen can power vehicles equipped with fuel cell technology, emitting only water.

Transportation as a sector is the second-largest producer of CO2 emissions, after electricity and heat generation, but among the hardest to decarbonize because of its distributed nature.

Toyota and Hyundai are among the early adopters of this technology, both having introduced commercial fuel-cell passenger vehicles in California. The state aims to have 1,000 hydrogen fueling stations by 2030.

In Europe, the Hydrogen Mobility Initiative is also underway, to build out hydrogen refueling infrastructure.

As the world considers hydrogen as a fuel, production is expected to grow substantially as the gas evolves from an “on-purpose” industrial product into a commodity.

A glimpse into hydrogen’s future

Japan’s initiative to ship hydrogen over substantial distance offers a taste of how the market could potentially evolve, and could stimulate efforts by global oil and gas companies to open their seaborne trade routes to hydrogen.

The same is true for future gas plant investment. As industry looks to a decarbonized future, gas plant operators would need to include hydrogen as part of their proposals to receive investment from banks increasingly focused on environmental concerns.

Some governments, including Japan, are taking the lead, by introducing hydrogen strategies for both blue and green hydrogen pathways. Germany’s plan to introduce its National Hydrogen Strategy in the next month will go a long way toward establishing its credentials in the new economy.

Obstacles remain, however, including COP25’s recent failure to agree on new emissions markets under the 2015 Paris Agreement. The failed negotiations, while not directly addressing hydrogen, will likely mean more time is needed to adopt emissions markets that will spur investment in CCS and other technologies.

Customers also have a role to play. Are they willing to absorb higher costs from new carbon capture and storage (CCS) projects, or to help pay for emerging electrolyzer technologies to decarbonize energy use?

Ultimately, creating a global market for hydrogen will need to cross national and regional boundaries, as we look toward a decarbonized future.