European CLO Performance: An Interactive Look At Exposure To 'B-' Rated Assets

Saudi Aramco’s IPO looks doomed to failure as it targets a $2 trillion flotation. Tepid oil prices, the fraught politics of the Middle East and the demonization of fossil fuel producers in response to climate change fears have all made the initial public offering (IPO) a mission impossible.

The kingdom had looked poised to list up to 2% of its shares on its domestic market within weeks. But the long-delayed partial privatization of the world’s largest state-owned oil company now faces another indefinite postponement after the devastating attacks last month on some of its most important facilities at Abqaiq and Khurais in the Eastern Province of Saudi Arabia.

Overnight, the attacks shut down 5.7 million barrels per day of Saudi Arabia’s oil production, roughly equivalent to 6% of global supply. A catastrophic spike in oil prices was only narrowly avoided because of the kingdom’s own emergency stockpiles, and its swift response in patching up the damage and restoring output in record time. But this has come at a high price to Aramco, which potential investors will want to see accounted for before paying any kind of premium for its shares in an IPO.

SAUDI ARAMCO BY THE NUMBERS 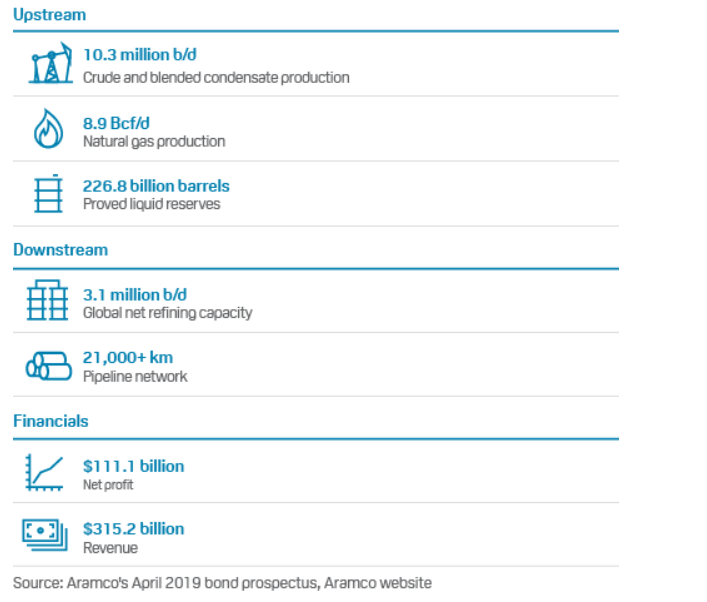 It is a level of detail which the normally secretive Aramco is probably uncomfortable to reveal. In August, Aramco for the first time gave potential investors a glimpse of its first-half earnings. Net income of almost $50 billion made it comfortably the world’s most profitable company. However, the cost of repairs at Abqaiq and the inconvenience caused by the attacks will be an ugly blemish on its otherwise pristine balance sheet.

Despite US President Donald Trump’s decision to beef up the American military presence in Saudi Arabia to help protect its oil, the idea of investing in Aramco has become a much risker proposition following the attacks. The Abqaiq episode is the latest in a spate of violent incidents that have targeted oil tankers, refineries and export pipelines in the region. Blamed on either rebels from Yemen or, more worryingly, Iran, the attacks have highlighted Aramco’s vulnerability to the combustible Middle East and concerns that investors will be left paying the bill for any repairs in the future.

Oil prices are also making it harder for Aramco’s bankers to deliver the target $2 trillion valuation set by the kingdom’s powerful Crown Prince Mohammed bin Salman Al-Saud. The heir to the Saudi throne wants to raise at least $100 billion from the sale of up to a 5% stake in the company to fund his Vision 2030 economic development plans, which include building a giant robotic city called NEOM on the kingdom’s Red Sea coast. Few experts believe this lofty valuation is possible with crude trading at around $60 per barrel.

Three years after he first announced the idea of listing shares in Aramco, and growing impatient because of repeated delays, the crown prince replaced the country’s oil minister last month with his brother, Prince Abdulaziz bin Salman. However, negative events have again overtaken the IPOs prospects.

OIL PRICES AND SAUDI POLICY SINCE THE FINANCIAL CRISIS

Some international fund managers who have recently visited Aramco doubt the company would choose the current economic climate to list shares and would rather delay the offering until oil prices rebound, even though this may take years to happen.

However, this strategy would also carry risks as international investors come under increasing pressure to either divest existing holdings in fossil fuel producers like Aramco, or avoid the sector altogether.

Bank of England governor Mark Carney is among a growing list of policymakers pushing for financial institutions to make mandatory disclosures of climate change risk and carbon emissions. More forecasters are also predicting a peak in global oil demand being reached over the next decade by 2030, which makes Aramco a less attractive proposition.

In response, Aramco may have to offer investors even bigger returns. Last month, the company revealed it would pay $75 billion in dividends next year and prioritize the interests of private investors going forward should its performance fall short. However, this still may not be enough to lure investors away from the sector’s bellwether international oil companies such as BP, Exxon Mobil and Shell.

A highly-paid army of bankers, financial advisers, consultants and public relations flacks drafted into the kingdom have once again failed to deliver the Aramco IPO on schedule. Investors are losing patience and interest.