Russia is all set to gain a foothold in the global hydrogen sector in what looks like a bid to be a key supplier for Japan, which has ambitious targets for adoption of the fuel by 2050.

Having been burned earlier on by delays in securing a significant share of the LNG market, Moscow looks determined to seize what it perceives as the next big opportunity in energy technology.

State-owned oil and gas major Gazprom announced on February 20 it is looking to produce hydrogen from natural gas. This is just the last of a series of announcements made over the past six months.

Gazprom had said in September 2019 it was discussing prospects for the use and storage of methane-hydrogen with German energy company Uniper.

Also last September, Nuclear energy colossus Rosatom said it had launched a program for hydrogen production from excess nuclear energy – via electrolysis – destined both for the national and global market. At the end of the month, the same company signed an agreement with Japan’s Agency for Natural Resources and Energy to conduct a feasibility study in 2020-2021 to export hydrogen from Russia to Japan.

At the end of the year, the Russian state also added its weight to the flurry of interest in hydrogen projects. Energy minister Alexander Novak in December officially announced the creation of a working group focused on designing a roadmap for a hydrogen energy system in the Russian Federation.

The crescendo of announcements came after a closed-door meeting held at the end of the summer that brought together Novak, representatives of energy research centers and major energy companies, including Gazprom, Rosatom, Rostec, and Sibur.

According to Russian newspaper Vedomosti, which reported on the meeting quoting anonymous attendees, the convention was informed by a report published by Russian Energy consultancy EnergyNet.

On Monday, S&P Global Platts assessed the month-ahead price for hydrogen produced through the steam methane reforming process (SMR) in the Netherlands at Eur1.1045/kg, including capex and carbon emissions.

The International Energy Agency (IEA) forecasts a 30% fall in the cost of producing hydrogen from renewable energy – which Platts is not yet assessing – by 2030.

According to the EnergyNet report, three main drivers would allow Russia to become a leading hydrogen player: large reserves of fresh water; excesses of power generation capacity and potential for building more; and finally, its proximity to Japan, where the hydrogen economy is actively developing.

Hydrogen would be mainly used in Russia’s transport and heating sectors but the largest part of production should be destined to exports, with the infrastructure mimicking what is currently happening with LNG, the report suggests. 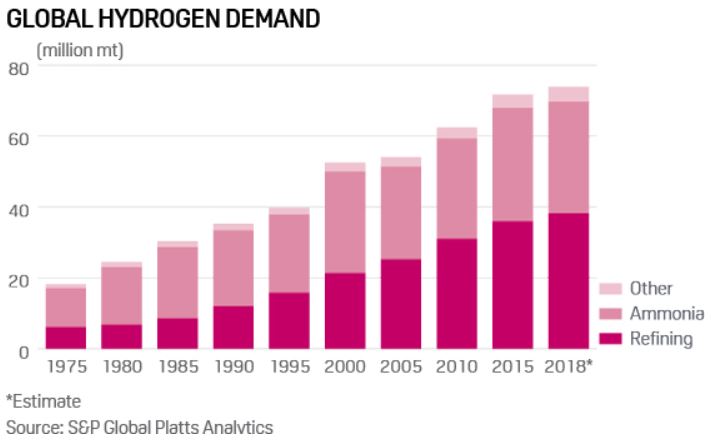 Moscow may want to avoid repeating the same delay Russia suffered before gaining a significant share of the global LNG market. While in 2009 it was already commissioning its first LNG project, the Sakhalin-2 plant, located in Russia’s Far East with 9.6 million tpa capacity, Moscow continued to focus largely on pipeline gas in the following years, especially in the Atlantic basin, and had to wait until 2017 to see a second LNG plant commissioned, Novatek’s Yamal LNG project.

At that time, the global amount of LNG delivery had already surpassed 400 Bcm and the global LNG market was dominated by Australia, Qatar and, latterly, US players.

The EnergyNet report sees in Japan the closest and largest destination for Russian potential hydrogen production, and warns about competition from Australia, which is also developing hydrogen technology.

Lacking domestic sources of primary energy, Japan is aiming to develop a comprehensive hydrogen system to diversify energy sources and reduce the burden on the environment among other goals  . The Japanese New Energy and Industrial Technology Development Organisation is focused on test implementation of import chains of hydrogen to Japan. In late 2019 a meeting held by the Ministry of Economy, Trade and Industry attracted delegates from 35 countries, as Japan sought to promote development of hydrogen energy worldwide.

In June, Japan’s cabinet adopted a long-term emissions reduction strategy under the Paris Agreement, including the goal for the country to be carbon-neutral soon after 2050. The strategy includes cutting the cost of producing carbon dioxide-free hydrogen to less than a tenth of current levels by 2050. Japan’s Tokyo Electric Power Company Holdings (TEPCO) and JXTG Holdings in March 2019 announced plans to build one of the world’s biggest hydrogen refueling stations in Tokyo by mid-2020.

In the race to supply hydrogen-thirsty Japan, Russia can already count on a hydrogen production pilot project now under construction at Ust-Srednekanskaya hydroelectric power station, Russia’s largest hydro plant. The facility is strategically located in the Magadan region in the Far East District, very close to Japan. 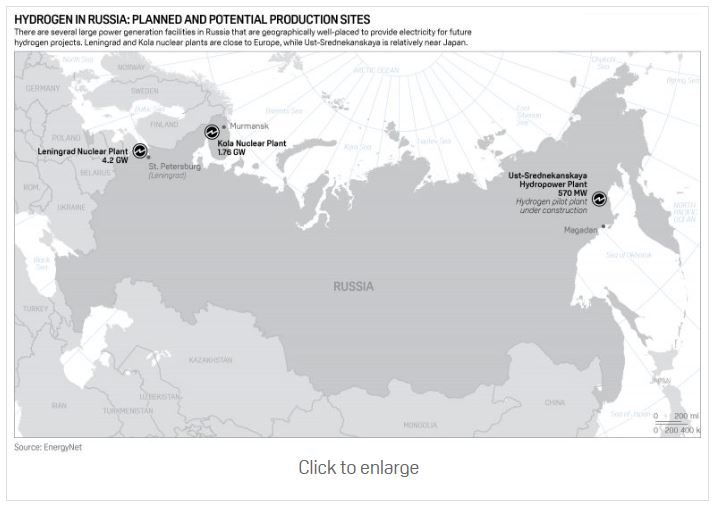 Japanese Kawasaki Heavy Industries and Russia’s PJSC Magadanenergo (part of the state-owned RusHydro group) are partners in the pilot hydrogen plant, which aim to produce liquefied hydrogen for industrial use. The station is set to reach full capacity by 2024.

However, as Russia pulls up its socks to catch up in the hydrogen market, Australia is also speeding its collaboration with Japan and Korea on production of the fuel.

Australian and Japanese trade ministers met in Melbourne in January to sign a joint statement of co-operation, affirming Australia’s potential as a major exporter of hydrogen, with Japan as a key recipient.

The World Energy Council has identified Australia as a “giant with potential to become a world key player [in hydrogen],” while the International Energy agency has projected that Australia could easily produce the equivalent of 100 million tonnes of oil in hydrogen for export, enough to replace 3% of global gas consumption.

The deal will see Australia and Japan continue to cooperate on the Hydrogen Energy Supply Chain (HESC) project in Victoria, an effort toward the world’s first international liquid hydrogen supply chain.

Minister for Resources and Northern Australia, Matt Canavan, said in a January press release that Australia and Japan are well-placed to maximise the opportunities presented by hydrogen, based on a long history of successful energy and resource trade.

“Australia is building a hydrogen production base to foster domestic growth and meet future export demand in Japan and the region,” Canavan said.

“The opportunities are great. Scenarios developed for the National Hydrogen Strategy indicate an Australian hydrogen industry could generate about 8,000 jobs and about $11 billion a year in GDP by 2050,” he added.

Europe in the picture

One of Gazprom’s biggest projects currently under construction, the 55 bcm/y Nord Stream 2 gas pipeline running for 1,200 km from Russia to Germany in offshore water, is capable of transporting hydrogen, Eurogas secretary general, James Watson, said to media at the end of December.

With the cost of producing hydrogen expected to fall dramatically in the coming years, Russia’s efforts today could be crucial to establish itself as a major player in global market. But its success, as well as that of other producers, will also depend on the key consumer markets to quickly evolve and create  joined-up hydrogen systems.