On a rising number of days each year, some areas of the US have more renewable power than they know what to do with, write Rocco Canonica and Kassia Micek in a two-part series. In this instalment, California provides a case study for other states – how is it coping with the challenges of unpredictable generation and excess output?

Renewable power generation growth in the US is soaring and is expected to overtake natural gas-fired power generation by 2045, according to the US Energy Administration, leading to major concerns about the reliability of these intermittent resources and the significant impacts they will have on US power supply and prices.

As the renewables fleet grows rapidly, grid operators will increasingly have to manage oversupply, likely through generation curtailments, and will have to address the negative impacts that low power prices will have on future generation development.

California has provided a stunning example of these challenges. The state has by far the largest amount of solar power generation among US states, with nearly 13 GW. Renewable output across the California Independent System Operator nearly doubled in the last decade to account for roughly 40% of its total fuel mix in 2019, according to ISO data. This rapid growth has also brought with it adverse impacts, including generation curtailments that surpassed 17,000 MWh on April 1. 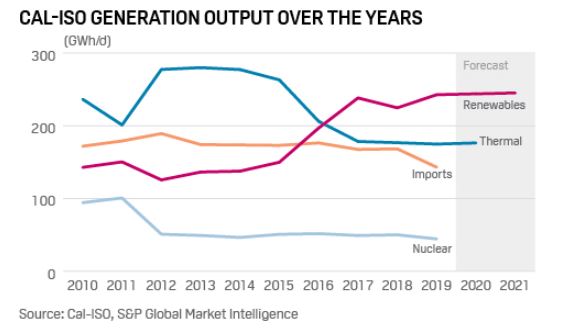 In Texas, wind power capacity has grown to nearly 24 GW, with huge wind and solar growth expected again this year. The Electric Reliability Council of Texas has seen the most wind power development in the US, and power prices in the state have weakened, significantly diminishing the incentive for developers to build new power plants to compensate for retirements and load growth. Reserve margins in ERCOT have become increasingly thin, raising concerns about potential future summer reliability.

These examples reveal just some of the challenges ahead for the multiple US states pursuing 80-100% targets on carbon-free power generation over the next few decades.

There is so much solar power in California today that it can generate more electricity than is needed during the middle of the day. In order to balance supply and demand on the grid, the ISO must automatically reduce the production of energy from renewable resources, or “curtail” generation. In rare instances, when economic bids from generators are insufficient, the ISO also must manually curtail production to maintain the supply and demand balance.

“It may be that the most effective way to manage this constraint on the transmission line is to manage the supply of renewables on the line,” said Guillermo Bautiste Alderete, Cal-ISO director of market analysis and forecasting, adding that congestion management makes up the vast majority of ISO curtailments.

The ISO publishes a daily report that breaks down the types of curtailments for each hour of the day. The high level of congestion management curtailments can be seen in data for January, when ISO curtailments totaled 138,002 MWh, a jump of nearly 100% month on month and more than the last five Januarys combined. Outages in the southern region caused localized curtailments during the month, Alderete said. 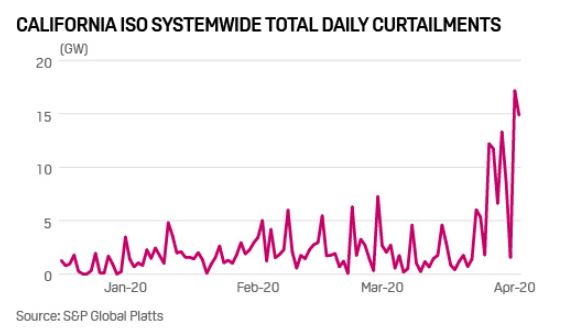 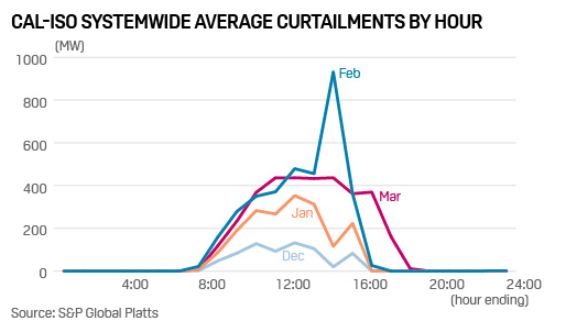 There was 300,323 MWh of curtailed Cal-ISO generation March 1, of which 233,266 MWh or 78% was from congestion management or localized curtailments, according to the daily Cal-ISO Wind and Solar Curtailment report.

To keep things in perspective, renewables curtailments make up about 2-3% of total renewable production, Alderete said. So, while large amounts of generation is being curtailed, it is still a fraction of overall generation.

Nevertheless, this problem is only going to become more challenging in the future as even more solar is added to the grid. There are increasing efforts to pair storage with solar generation to address the problems directly.

Cal-ISO is currently in the middle of a seasonal ramp effect due to lower load, higher wind and solar generation, and increasing hydro generation that typically happens between winter and spring.

“Curtailments are significant at certain times of the year, such as spring,” Greenberg said.

There is increased solar during that time, but also lower loads due to milder weather. That means there is not a large market to absorb the increased renewable generation.

The ISO’s curtailments take place to drop the supply to the level of demand. This automatically happens in the market when there is an oversupply of renewable resources, said Anne Gonzales, Cal-ISO’s senior public information officer.

ISO curtailments reached a record level in May 2019 as the ISO slashed a total of 223,195 MWh of wind and solar generation to balance supply and demand, a more than 17% month-on-month increase, according to ISO data. Curtailments in 2019 more than doubled year on year and have averaged a nearly 97% increase annually over the last five years.

“One factor that may limit system curtailments this spring is lower California hydro supply,” Greenberg said. “However, we may still see modest increases in curtailments from the prior year related to congestion, depending on wind and solar conditions.”

Hydro generation has averaged 7.1% of the Cal-ISO fuel mix so far this year, well below the average of 13.2% for Q1 2019, according to ISO data. The water supply forecast for Shasta Dam, the barometer for hydro conditions in the state, is currently at 63% of normal for the April-July water season, which is the trend across California reservoirs, according to California Nevada Rive Forecast Center data.

The vast majority of ISO curtailments come from solar generation, which has grown to a capacity of 12.7 GW, compared with 6.9 GW of installed wind capacity. Further growth will continue to take place.

“Curtailments were up year over year in November-January,” noted Greenberg. “This is occurring against a long-term trend toward increased curtailments as solar capacity continues to grow. So all else equal, we would expect an earlier start to the curtailment ‘season’” in 2020.

As renewables increase, boosting the likelihood of curtailments, power prices are also more likely to plummet, often to zero or negative levels. This challenges investment in generation to maintain reliability and highlights a need for significant growth of storage on the grid. 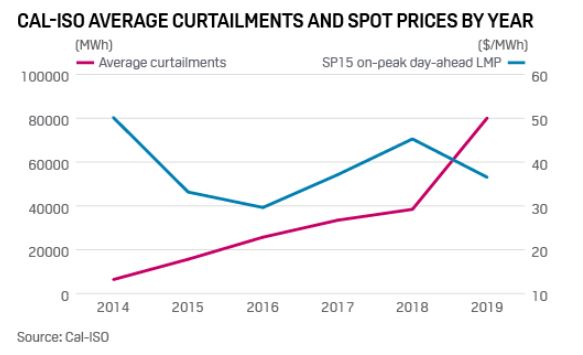 “High levels of curtailments would be related to low or negative prices so the ability to predict curtailments would help in valuing a market position,” said Greenberg. “Ultimately, periods of oversupply/curtailment (zero or negative prices) will require high prices in other intervals to cover investment costs. These prices/spreads may ultimately cover the cost of maintaining dispatchable capacity, either gas peaking or storage.”

California has long been a leader in US renewables development. Cal-ISO had a record-breaking year in 2019 for the amounts of solar and wind energy, with a historical peak of 80.3% of renewables serving demand reached May 15. More than 51% came from solar and nearly 19% from wind, according to the ISO. The highest amount of renewables serving peak electricity demand occurred on August 8, 2019 at 14,766 MW, or 41.8%, surpassing an August 6 record of 13,902 MW.

“Things are moving so quickly,” Alderete said about the evolving generation stack and advancements in technology.

There will be increased penetration of clean energy as the state moves toward its goal of 44% renewables by 2024 and 100% carbon-free generation by 2045. Diversity of resource mix both technologically and geographically is key, Alderete said about incentivizing technology.

“California is over-complying with the current [Renewable Portfolio Standard] target and [Portfolio Content Category] 1 allowances are being banked,” Greenberg said, adding that the overcompliance reflects current low development costs due to the availability of investment tax credit for solar and solar/storage projects, lower-than-expected loads and future increases in the RPS target of 60% of retail sales in 2030.