The global tanker shipping industry is likely to find a new normal in the medium term, with sales of second-hand ships taking center stage while orders for newbuilds slow down.

Meanwhile, existing tanker companies may become bigger as ships change hands, or they may form pools to enable better bargaining with charterers, while shying away from ordering new ships.

Uncertainties over how and when the coronavirus pandemic will end are partly behind the new approach, but so is the higher use of greener fuels. The global health crisis hit when the shipping industry was already in the throes of a major transition to a low-sulfur fuel regime, and starting to plan for its eventual decarbonzation.

While in 2020 to date shipowners benefited from a glut of oil supply and the ensuing demand for floating storage, leaner days may be ahead now that crude flows have evened out and global oil consumption has slumped. This, along with the longer-term impact on oil demand from the energy transition, is already having a clear effect on investment in the sector.

From January this year, the tanker sector, along with its dry bulk and container shipping peers, successfully executed a worldwide plan steered by the International Maritime Organization (IMO) under which marine fuels with more than 0.5% sulfur can only be used in ships that have exhaust systems called scrubbers fitted on them.

With larger-scale investments already made to adjust to the new system, tanker owners are now hesitant to pour money into fresh greenfield projects. The value of all kinds of ships is falling, according to Copenhagen-based Peter Sand, chief shipping analyst at BIMCO, the world’s largest international shipping association with more than 2,200 members. Even though sale and purchase activity in the tanker sector remained active into April, thereafter it started to ease, Sand said.

A sale and purchase broker cited the example of a 2005 built, 302,000 dwt VLCC recently changing hands at just under $27 million. Sales of a couple of similar 15-year-old ships in April took place at around $37-$39 million.

Analysts point out that the April-May period was exceptional, in that low crude prices made floating storage of crude and refined products lucrative, and supported the prices of tankers as well. According to UK-based shipping consultancy VesselsValue, the phase of high-priced tanker sales has ended for the time being and rates are now in a period of adjustment.

The total shipping order book, including tankers, is now at a 17-year low as the coronavirus pandemic has massively slowed contracting, Sand said. Orders for new tankers have dropped more than 40% in the first seven months of 2020 compared with the year-earlier period, according to BIMCO’s estimates.

Instead of ordering new ships, companies are looking for greater synergies. In June, through a combination of pool and time charter deals, Trafigura Maritime placed seven of its tankers with Navig8, which owns and operates vessels and also manages shipping pools.

Around the same time, owner and operator companies NORDEN and Diamond S Shipping Inc. formed a joint partnership, DiaNor. Under the agreement, Diamond S is contributing 28 Medium Range tankers to the NORDEN-owned Norient Product Pool, making it one of the world’s largest, with close to 90 such ships. Diamond S CEO Craig Stevenson in a statement described the move as “much needed consolidation in the tanker industry.”

Through long-duration arrangements such as time charters, or contributing ships to a single pool, owners can increase the possibility of garnering higher freight and avoid having to undertake complete transfer of ownership through mergers and acquisitions.

The values at which sales and purchases of tankers are taking place may have declined but the number and frequency of deals involving second-hand ships have been robust. Going forward, this vibrant market will be the flavor of the industry, some analysts say.

Even during the global pandemic, a large number of second-hand transactions took place, and sellers with prompt tonnage were able to take advantage of firm market values, according to Olivia Watkins, VesselsValue’s UK-based head cargo analyst. An estimated $4.5 billion worth of sale and purchase activity is estimated to have taken place in the first half of 2020, up from $4.2 billion in the same period two years ago, VesselsValue data showed.

There have been at least two significant spikes in spot tanker freight rates so far this year and the year-todate average daily earnings of VLCC owners on the benchmark Persian Gulf-China route are close to $60,000, according to Masood Baig, a director with Singapore-based Straitship Brokers. 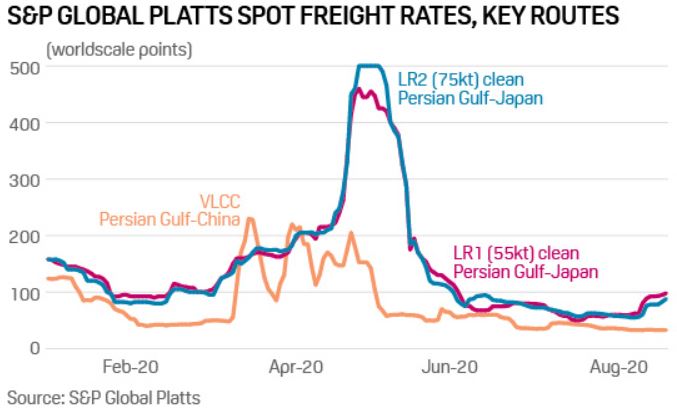 According to brokers, even now VLCC owners are earning around $12,000/day. Baig says that, with strong demand projected for the last quarter, an annual average of $40,000-50,000/day is highly likely for 2020. It is these kinds of earnings, and reluctance to buy new ships, that are keeping investors’ interest alive in the second-hand sector.

Another consideration influencing the choice between second-hand and newbuild ships is the unpredictability of the market in the medium to long term as the energy transition gathers pace.

Using 2008 as a baseline year, the IMO is aiming for a 50% reduction in greenhouse gas emissions from shipping by 2050. This will result in less use of fossil fuels to move ships, as alternatives including ammonia or hydrogen gain traction.

In addition, the global energy mix is set to change in the next three decades, with greater use of electric vehicles gradually reducing the movement of crude oil and refined products loaded on tankers. Already, the sale of EVs has shown a sharp rise in recent years. Electric cars, which accounted for 2.6% of global car sales and about 1% of global car stock in 2019, registered a 40% increase between 2018-2019, according to IEA estimates.

Ordering a new tanker now gives a 20-year ownership horizon, but going into 2040, the share of crude oil in the energy mix may change drastically, said Baig. An owner will be in a more predictable trading environment by instead buying a second hand VLCC and operating it for a decade, he said.

The majority of investments in tanker sales so far this year have been for those between 15 and 20 years old, said Watkins. According to one broker tracking such deals, a 17-year-old Suezmax was snapped up by a Greek buyer for $20 million in May, and in early August a 10-year old changed hands for $25 million.

The pandemic has also resulted in a situation where not all crude volumes being pumped out and products being refined can be sold or consumed in a seamless flow, as was the norm last year.

This has prompted refining and trading companies to hold larger volumes in ships, for longer durations, either due to limited demand or in anticipation of better prices in a contango pricing structure. Demand for floating storage was so high in the second quarter of this year that spot tanker freight rates hit an all-time high. 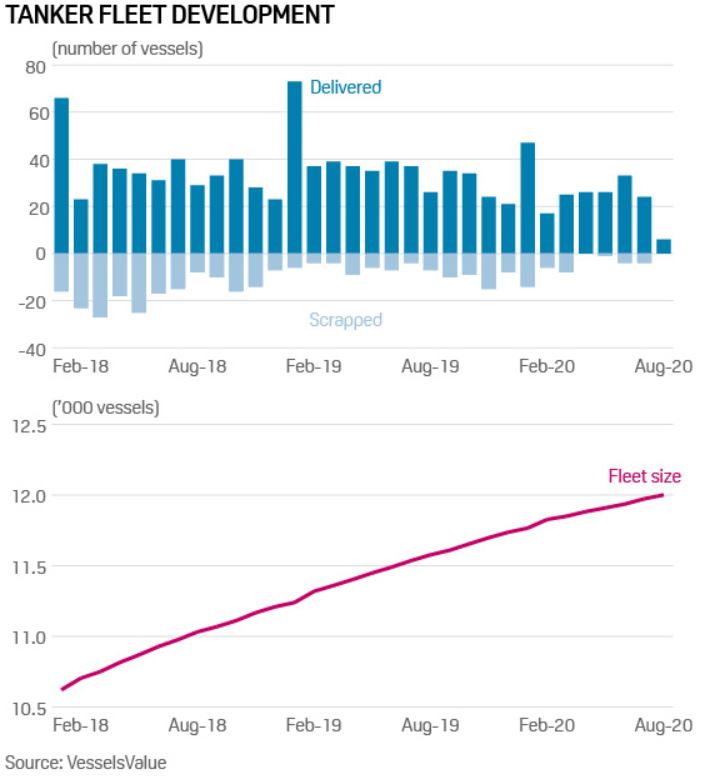 In turn, this dynamic supported the value of ships as well. For product tankers, the sale and purchase market has stayed fairly liquid, although activity in sheer numbers is much below that of 2018 and 2019, according to BIMCO’s Sand. In early August, VesselsValue estimated a five-year-old Long Range II tanker – the most popular for floating storage of products – at almost $42 million, up 14% from the beginning of last year.

But further support from floating storage for freight rates and ship values is unlikely in the near term, analysts say. Wherever and whenever possible, floating storage is now being offloaded and there is no more incentive to buy at current prices as the demand outlook is weak, Sand said.

The possibility of a return to a scenario of low demand and increased supply availability of tankers due to reduced floating storage is the main threat to supported rates, said Ole-Rikard Hammer, a senior analyst with Oslo-based Arctic Securities.

According to Straitship Brokers’ Baig, in the “normal” course of events, global crude market growth of 1 million b/d would have implied an additional requirement of around 25 VLCCs this year. However, in the current environment, S&P Global Platts Analytics expects oil demand will contract by 8.1 million b/d in 2020.

Consequently, additional tonnage is no longer required, and both deliveries and orders have already slowed down. Some dirty tanker orders were placed in the first five months, but June and July were completely anaemic with no orders at all, added Sand.

VesselsValue estimates that the delivery of new tankers has halved to 24 in July, from 47 in January. UK-based Marine Strategies International forecasts less than 1% growth in the VLCC fleet in the current and next two quarters.

Yet the supply is unlikely to tighten, because there has been hardly any demolition of old ships. “It’s been seven months now, without a single VLCC being demolished,” noted Sand.

But there is potential for scrappings to pick up if rates stay depressed, as 20% of the tanker fleet is more than 15 years old and capital expenditure on them can go up, Hammer said.

It is still not clear whether the world is in the beginning or middle of the pandemic. What is clear, however, is that a sudden abrupt end to this new normal is highly unlikely in the near term. At the same time, while the global economy in general and the maritime world in particular is taking a beating, a catastrophic doomsday is nowhere on the horizon.

If shipping tycoons and their fellow investors hold back the urge to buy new tankers and strategically position their existing fleet to prevent a glut from developing at the key loading ports, their return on investment will be protected.