The S&P GSCI Brent Crude Oil has fallen by more than 30% over the first six trading days of March. On Friday, March 6, 2020, Russia opted out of a Saudi-led proposal to extend and deepen crude production cuts that had been central to a nearly three-year OPEC+ agreement to manage global oil supplies. With coronavirus cramping global oil demand, OPEC, led by Saudi Arabia, had wanted to further restrict supply to hold up oil prices.

Oil prices lost as much as a third of their value on Monday, March 9, 2020, the largest daily rout since the 1991 Gulf War. The S&P GSCI Brent Crude Oil ended the day down 23.5%. Exhibit 1 offers a visual representation of the this one-day price fall in the Brent crude oil prices. 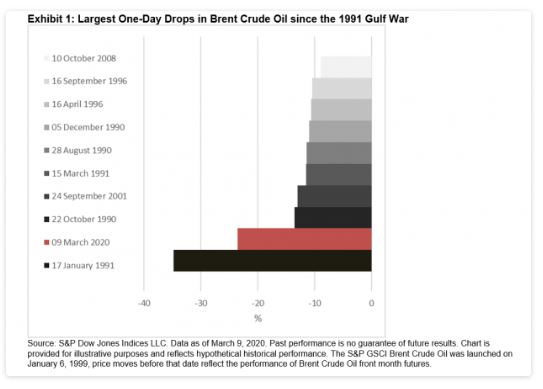 The disintegration of the OPEC+ agreement almost immediately creates a new operating environment for the world’s three largest oil producers.

It is also worth highlighting that the collapse of the OPEC+ agreement, and the anticipated increase in supply that it will bring, has been made against the backdrop of stymied global oil demand. While lower oil prices typically boost consumption, the global coronavirus outbreak is quashing oil demand and amplifying the effect of the anticipated supply surge. Falling demand has the potential to both deepen and lengthen the energy price rout. The most recent forecast from the International Energy Agency now has global oil demand contracting in 2020, which would mark the first year-over-year fall in demand in more than a decade.

Unless Saudi Arabia’s shock and awe tactics bring OPEC+ members, namely Russia, back to the negotiating table, the fight for oil market share has well and truly commenced.