Tracking The Spread And Economic Impact of The Coronavirus

Venezuela, Rosneft and US sanctions complications: Fuel for Thought

The month of August saw a marked acceleration in the pace of developments in the U.S.-China trade war and is reflected in our readers’ interest. The top four most read reports in August all sought to make sense of developments including: the widening of U.S. tariffs to cover all Chinese exports; the division of the implementation of those tariffs into two phases; China’s retaliation with additional duties on U.S. exports; and methods for identifying which companies are exposed to increased tariffs.

Our data showed evidence for a switch in sourcing to Vietnam and away from China, though the retail sector has yet to make major changes. Elsewhere our analyses also identified potential victims from an emerging U.S.-EU trade conflict, Toyota’s development ahead of U.S. automotive duties and the relative performance of the major freight forwarders.

The Trump administration has modestly de-escalated the trade war by splitting the so-called “list 4” tariff group – where duties of 10% were due from Sept. 1 – into two parts. The minority part, worth $108.8 billion in terms of imports in the 12 months to Jun. 30 and known as list 4A will have duties of 10% applied from Sept. 1.

The leading product lines include certain apparel lines worth $38.8 billion and TVs/monitors worth $8.6 billion. List 4B, which covers $154.8 billion of products. includes phones, laptops, toys and the remaining apparel items. Tariffs on those products will be delayed until Dec. 15 at a 10% rate. Importantly the restructuring reduces the risk of interrupting seasonal peak shipments.

Imports of the list 4B apparel items typically peaked in August in the past three years. Shipments of toys normally reach a maximum in October while phones peak in October or November; and laptops peak in November or December. So far only laptops showed signs of stockpiling with a 39.1% year over year rise in June – likely after earlier talks failed in May – with all other list 4B items down 0.1%. 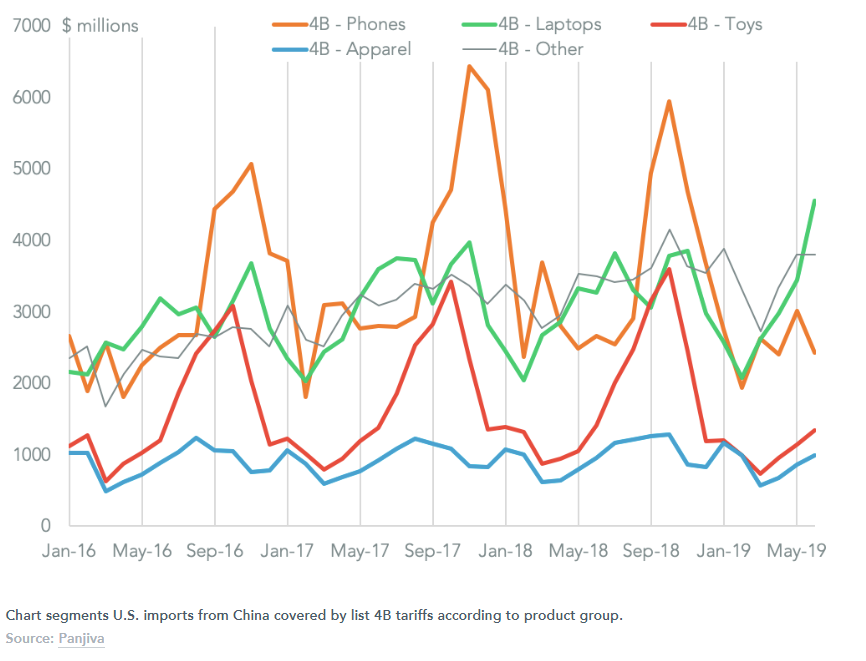 U.S. international trade in goods and services fell 0.4% year over year in June. The main drag in percentage terms came from a 3.5% slide in exports of goods including food and capital goods. Imports meanwhile inched 1.2% higher with the result that the trade deficit increased for a fourth straight month year over year to reach $55.2 billion.

The biggest drag on trade was with China with U.S. exports down 16.8% versus imports which fell 12.6%. While that would indicate the U.S. lost out, in dollar terms its exports only fell $1.82 billion year over year whereas imports fell $5.61 billion. That would suggest the U.S. “won” the trade war on balance in June, increasing the likelihood that President Trump will make good on his threat to apply duties to all Chinese exports from Sept. 1.

For context imports of list 1 and 2 products, where duties of 25% were applied in July and August 2018, fell 38.3% and 33.8% year over year while list 3 products – with duties of 10% last September and 25% from May – fell 32.6%. The remaining products – where imports were worth $281 billion in the 12 months to Jun. 30 – increased 12.6% year over year in June, leading to the conclusion that the rocky nature of prior rounds of talks have already led companies to start stockpiling. 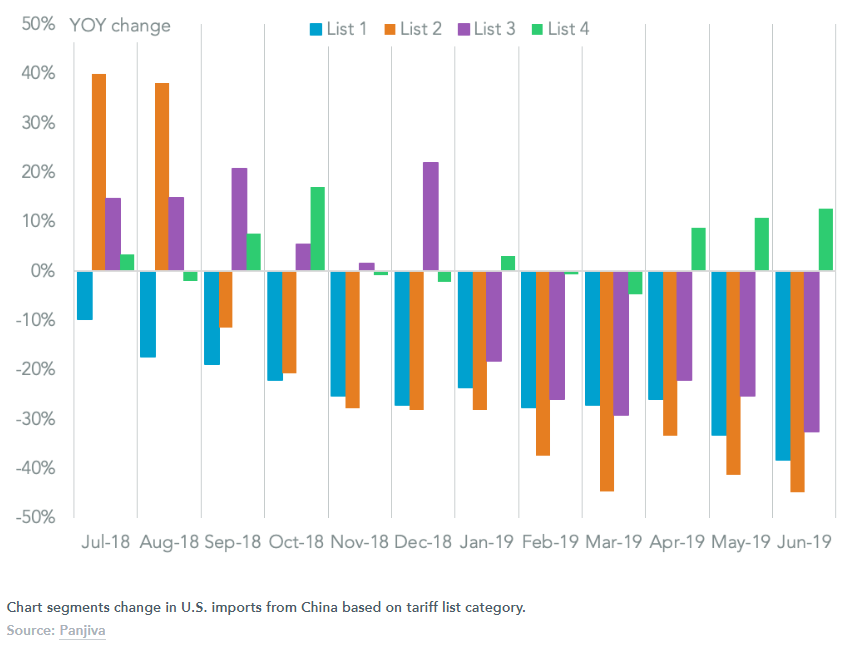 The U.S.-China trade war reached its second anniversary on Aug. 21, 2019 with the first shot defined as being the U.S. section 301 review of China’s intellectual property practices.

The products in the Sept. 1 group may have been chosen for their recent recovery – U.S. exports in that group fell by just 15.2% year over year in 2Q compared to 20.4% for the Dec. 15 round. Looking ahead there may be few opportunities for de-escalation. President Trump already ordered a 5% point increase in all existing and future tariffs as well as considering the options for restricting U.S. companies’ investment in China.

The U.S. Congress may also take tariff- and non-tariff related actions after Labor Day and relations with China will remain in focus during the election process. The UN General Assembly from Sept. 23 may mark the last opportunity for Xi and Trump and sign a deal before year end. The 70th anniversary of the PRC on Oct. 1, 2019 may mean the Chinese government is in no mood to compromise later in the year. 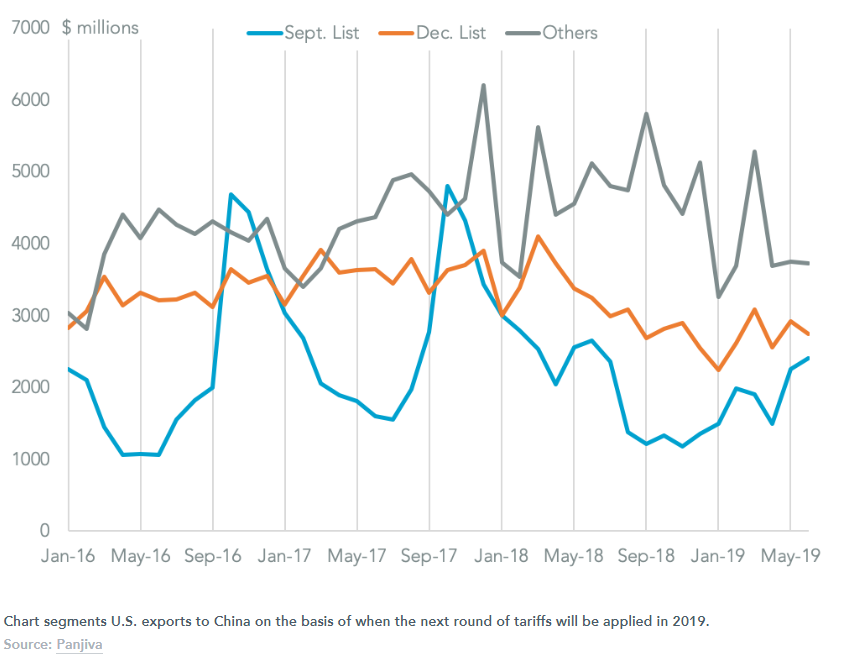 The U.S. government has split the next round of tariffs on Chinese exports into two phases. List 4A will have duties applied from Sept. 1 and accounted for $109 billion of imports at a rate of 10% while list 4B will be applied from Dec. 15. This report identifies companies in five sectors that may be exposed to list 4A tariffs on the basis of Panjiva’s seaborne shipping data for the 12 months to Jun. 30 and provides context from tariff-code level product data.

Imports of plastic products are led by tableware which have seen a 7.8% year over year drop in shipments as companies including IKEA have trimmed their imports. In apparel and footwear most categories have fallen with plastic-uppered shoes declining by 17.7% and leather shoes off by 18.5% – leading importers may include Skechers and Adidas. Shipments of leisure goods are highly diverse and may capture sporting goods maker ICON Fitness and toy-brand owner Hasbro – though the latter’s main toy lines will only be included in list 4B.

The bulk of electronics imports that have yet to be covered by tariffs are in list 4B, though list 4A imports of televisions and audio equipment – potentially including those by Best Buy and TCL – were worth $8.7 billion and including. Similarly shipments of printers and desktop computers – which fell 14.3% and 32.7% year over year in 2Q – are also included with importers likely including Konica Minolta and Samsung Electronics.

PRINTER IMPORTS MAY BE JAMMED BY NEW TARIFFS 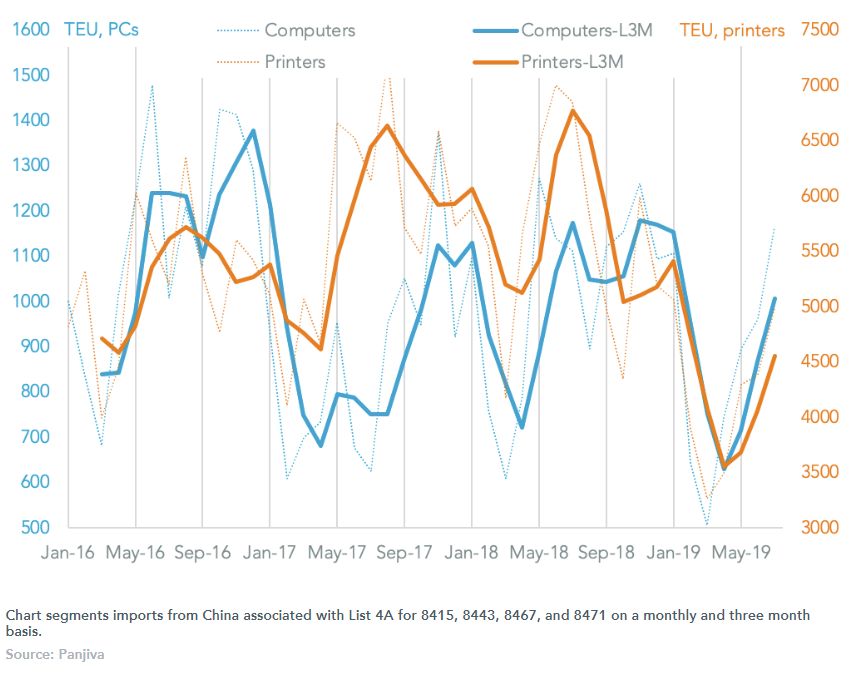 U.S. seaborne imports returned to growth in July with 1.5% increase year over year after a 2.5% decline in June. Imports from China continued to slide with a 3.0% reduction compared to a 3.3% fall in 2Q. That was offset by an increase in shipments from Asia ex-China which climbed 11.5% as companies switched sourcing to Vietnam – imports from which rose 28.5% to a record number of shipments – as well as India and Thailand where imports climbed 17.6% and 16.0% respectively.

There’s signs of stockpiling in consumer goods as a response to the May breakdown in U.S.-China talks, rather than the more recent announcements from President Trump at the end of July. Stockpiling likely drove a 7.5% year over year increase in apparel imports from all countries in July as well as an 18.5% surge in imports of toys. Shipments of electrical and electronics items increased 2.5% in July after a 2.3% in 2Q, likely reflecting concerns about tariffs for consumer electronics devices including laptop PCs.

With tariff increases due on Sept. 1 there’s not time to boost seafreight, leaving importers needing to consider airfreight. It’s worth noting seaborne imports peak in August for back-to-school products and November for holiday shopping products. 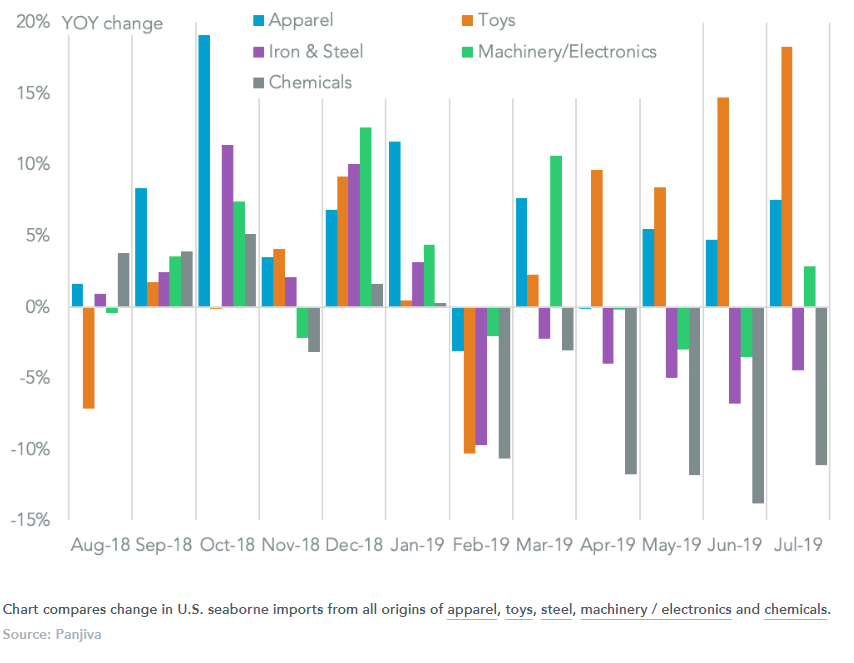 #6 Chinese Exporters Continue To Soak Up (A Proportion Of) U.S. Tariffs (Aug. 14)

The latter can be linked to Chinese exporters absorbing a proportion of the increase in tariffs applied under the section 301 program. Imports of chemicals – where 25% duties have been applied in stages since July 2018 – saw price deflation of 11.8%.

For furniture, where tariffs were increased to 25% from 10% from May, price deflation rose to 0.9%. Taken in the aggregate, the dollar value of the Chinese price deflation was $662 million year over year. By comparison the total increase in U.S. customs duty income – driven largely by duties on Chinese exports – came to $2.31 billion over the same period. 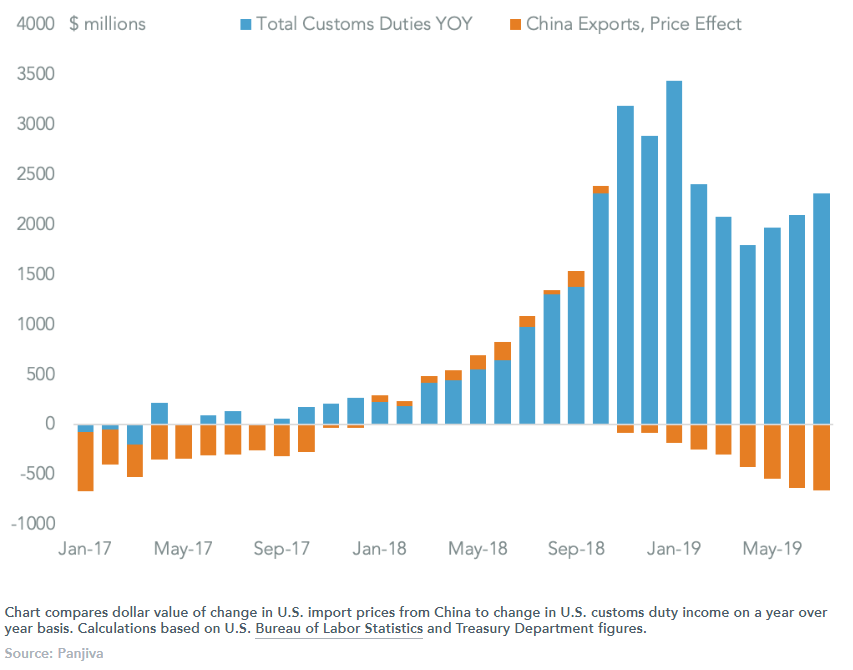 Toyota reported an 8.7% year over year increase in operating profits in the second quarter, in large part due to a focus on sales of SUVs. Panjiva data, retrieved via Xpressfeed, shows that Toyota’s U.S. seaborne imports surged 10.6% year over year in the three months to Jun. 30, predominantly due to parts shipments to its U.S. assembly plants.

Growth accelerated to 18.3% year over year in July, perhaps indicating a degree of stockpiling ahead of the risk of future automotive tariff increases. By volume imports are led by oil products, which represented 31.3% of the total in 2018, followed by batteries at 25.8% and auto components representing 24.8%.

Toyota is highly reliant on shipments from Japan, which represented 96.1% of the total in 2018. That leaves its heavily exposed to the success – or otherwise – of trade negotiation between the U.S. and Japan which could avert tariff increases and may reach a conclusion as soon as Sept. 17. 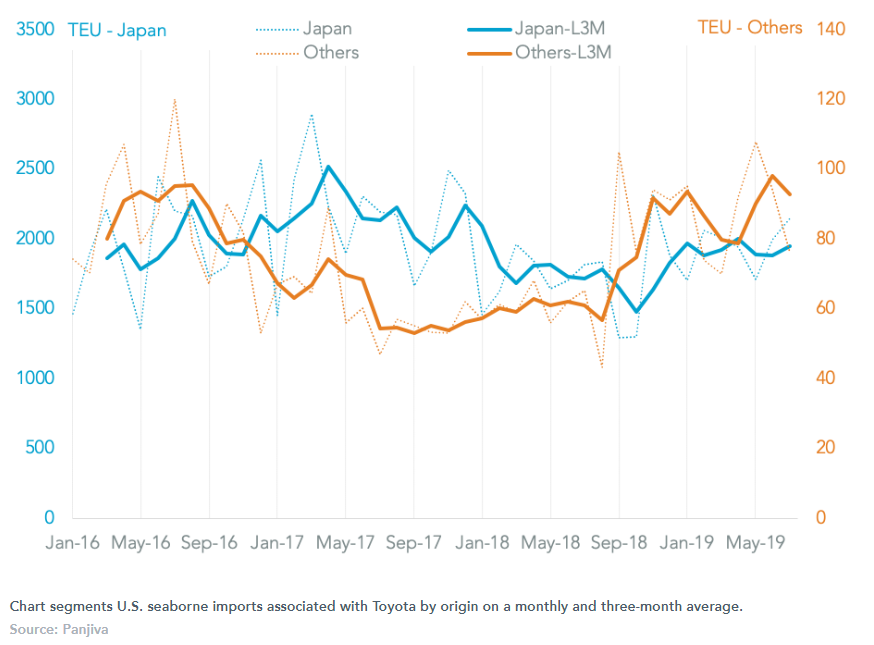 President Donald Trump has stated that he believes that the European Union is “worse than China” in terms of applying “barriers, tariffs, taxes”. That bodes ill for the – currently stalled – negotiations towards reaching a trade deal. Indeed, the U.S. merchandise trade deficit with the EU climbed 10.5% year over year in the 12 months to Jun. 30 to reach a record $175.5 billion. It’s likely that tariffs will be the preferred tool should the Trump administration wish to take action against the EU.

The largest contributors to the growth in the deficit are also subject to other administration policies. U.S. imports of jet engines from the EU climbed 41.3% in the 12 months to Jun. 30 on a year earlier, adding $5.13 billion to imports, and are embroiled in the wider aerospace subsidy controversy including Boeing and Airbus.

Imports of pharmaceuticals including immunotherapies rose by 10.0% and added $6.48 billion to U.S. imports – a sector where the administration is trying to cut healthcare costs. The automotive sector – where a separate national security-based tariff review is underway through November – saw growth of just 3.8% in the past 12 months but that still added $1.7 billion to imports. 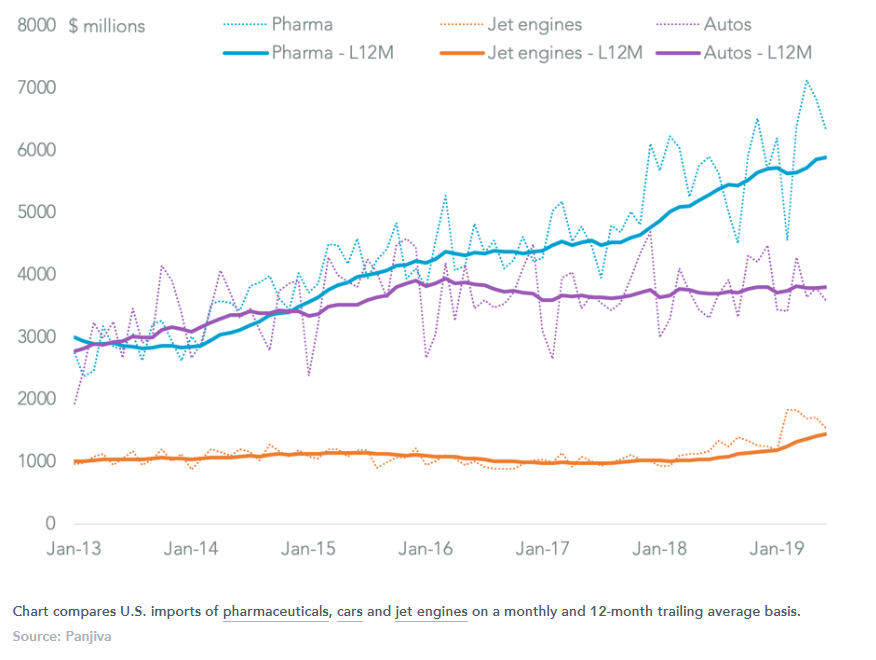 The global freight forwarding sector saw weaker revenues but improved profitability in 2Q. CH Robinson’s revenues fell 8.6% year over year – 2.5% points lower than analysts’ expected – but saw an increase in its EBITDA margin to 6.5% from 5.6% a year earlier due to cost cutting. DSV meanwhile saw revenue growth of just 3.0%, which was also 2.5% worse than analysts’ forecasts. It also saw increased profitability due to a stronger ocean freight business.

The outlook is less certain with CH Robinson’s CEO, Bob Biesterfeld, stating “We expect the soft freight environment to continue through the balance of 2019”. The two firm’s relative exposure to China is one reason for their different revenue performance. China represented 60.6% of CH Robinson’s U.S. seaborne, inbound freight in 2Q after a 15.5% year over year decline according to Panjiva’s data.

For DSV it accounted for 29.4% and fell just 5.5%. Should U.S.-China trade relations not improve then both may have to rely more on European traffic, where DSV is both more exposed and grew more quickly in 2Q at 30.7% year over year compared to CH Robinson’s 11.9%. 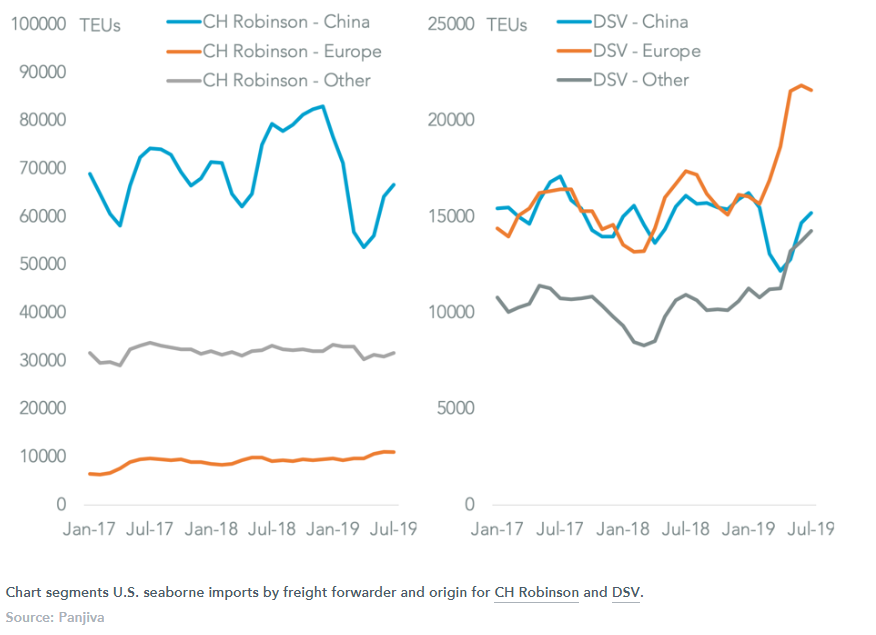 Over 600 retailers have written to the Trump administration to protest against the risk of a further widening of U.S. duties on Chinese exports. The so-called “list 4” group of products where tariffs have yet to be applied – but could rapidly implemented if U.S.-China negotiations breakdown – are focused on consumer electronics, apparel and toys.

The major retailers have followed markedly different strategies, with many yet to cut their imports from China. Target reduced its imports from China by just 0.7% year over year in 1H 2019 and boosted rest of world imports by 12.8%. Walmart meanwhile increased its shipments from China by 12.4% as well as increasing imports from India and cutting those from the rest of the world. Home Depot has pivoted towards Vietnam with a 55.1% increase while also modestly raising its Chinese imports by 2.9%.

In electronics Best Buy accelerated its shipments from China by 26.3% – perhaps as a response to tariff risks in electronics – while also raising shipments from Vietnam by 39.1%. The latter may reflect underlying supply chain changes by manufacturers.

Finally in the toy sector there’s been a more unified approach with Hasbro and Mattel increasing their imports from China by 7.8% and 20.6%, though the former increased its shipments from Vietnam and the latter cut them. 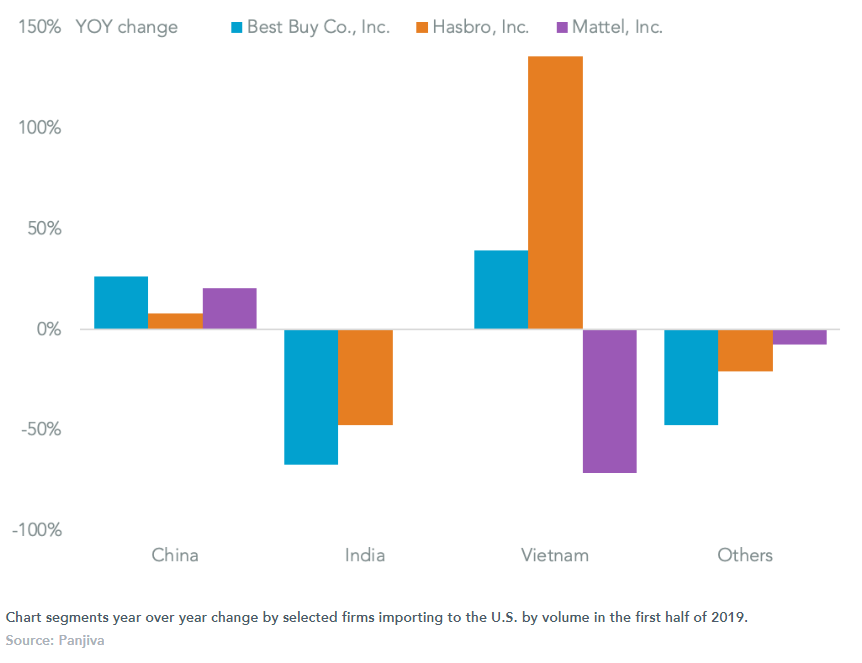