The changes attracted significant market attention and sparked a discussion around the names being added to the index, as well as those that were not. These updates also coincided with the S&P 500’s scheduled quarterly rebalancing. Changes to the index can be made at any time—they do not have to happen during quarterly rebalances. However, given the higher-than-usual attention, it’s worth revisiting the S&P 500’s purpose and objective, what the Index Committee does, and how the committee helps ensure that the index is doing its job.

The S&P 500 is synonymous with U.S. equity market performance and is referenced by investors, analysts, and the media every day. The index was up 1.5% today? Great, the S&P 500 is doing well! Did the market decline? Uh-oh, the S&P 500 did poorly. But whether the index is “doing a good job” has little to do with the direction of its returns.

Per the S&P U.S. Indices Methodology, the objective of the S&P 500 is to “measure the performance of the large-cap segment of the U.S. market.” That’s it. The job of the Index Committee is not to add stocks that it thinks will perform well. Instead, it makes sure the index continues to provide a representative reflection of the large cap U.S. equity market.

The U.S. large-cap market has changed significantly over the years and there are several ways the Index Committee ensures that the 63-year-old S&P 500 reflects that evolution. One of them is by rebalancing the index.

This brings us back to our first question. Have all the changes made over the years by the Index Committee helped the index accurately represent the U.S. large-cap market?

One way we can grade the S&P 500’s performance is through sector representation. Since the index has a fixed count of 500 companies, not every eligible company can be added to the index. One of the factors the Index Committee looks at when considering changes to the index is sector composition. Per the index methodology, this is measured by a comparison of GICS® sector weights in the S&P 500 with the corresponding weights in the large-cap range of the S&P Total Market Index (TMI), which measures the performance of all U.S. stocks.

Using the historical market capitalization thresholds from Appendix A of the S&P U.S. Indices Methodology document, we can arrive at the GICS sector weights for the large-cap section of the S&P TMI.

Exhibit 2 shows the relative sector weights of the S&P 500 against the large-cap portion of the S&P TMI. The average difference is based on year-end weights between 2007 and 2020. 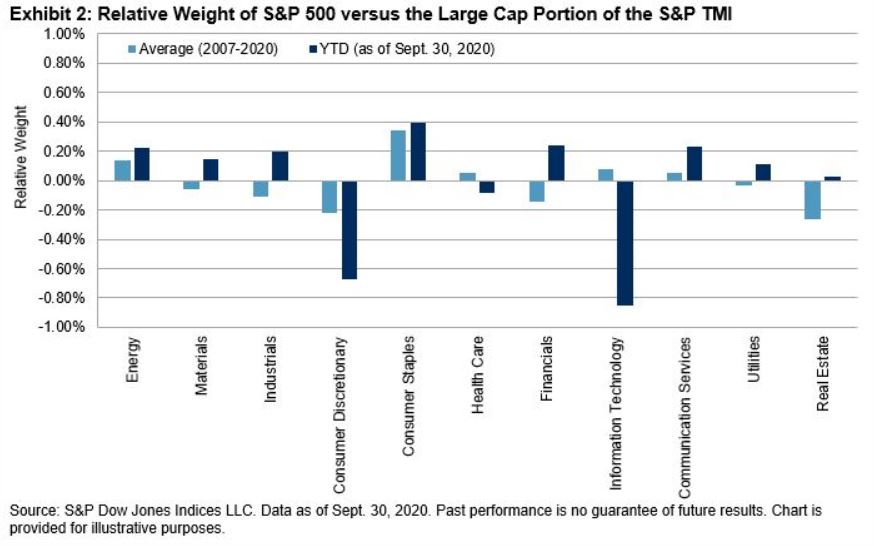 Clearly, the S&P 500 GICS sector weights have typically been similar to the large-cap portion of the S&P TMI. And while some differences have emerged in 2020, the S&P 500 remains representative of the large-cap U.S. equity space. The index is doing its job.