Key to evaluating core international equity benchmarks is an understanding of the country exposures offered. Developed and emerging market country classification differences between index providers may lead to notable geographic exposure differences across market segments. One of the most meaningful instances of this involves South Korea, which S&P DJI has classified as a developed market since 2001, while MSCI continues to classify the country as an emerging market.1

In our latest blog in a series highlighting key features of the global equity benchmark landscape, we explore South Korea’s classification as a developed market and the impact of its inclusion within the MSCI Emerging Market indices.

S&P DJI annually conducts a complete review of all countries included in its global equity benchmarks. Similar to other index providers, this process involves an evaluation of markets by various economic and market accessibility criteria. S&P DJI has classified South Korea as a developed market since 2001 because of its high level of economic development, considerable size and liquidity, absence of significant foreign investment restrictions, and GDP per capita alignment with developed economies (see Exhibit 1). Over the years, S&P DJI has confirmed this classification through its annual country classification consultation process, which involves feedback from a wide range of market participants. 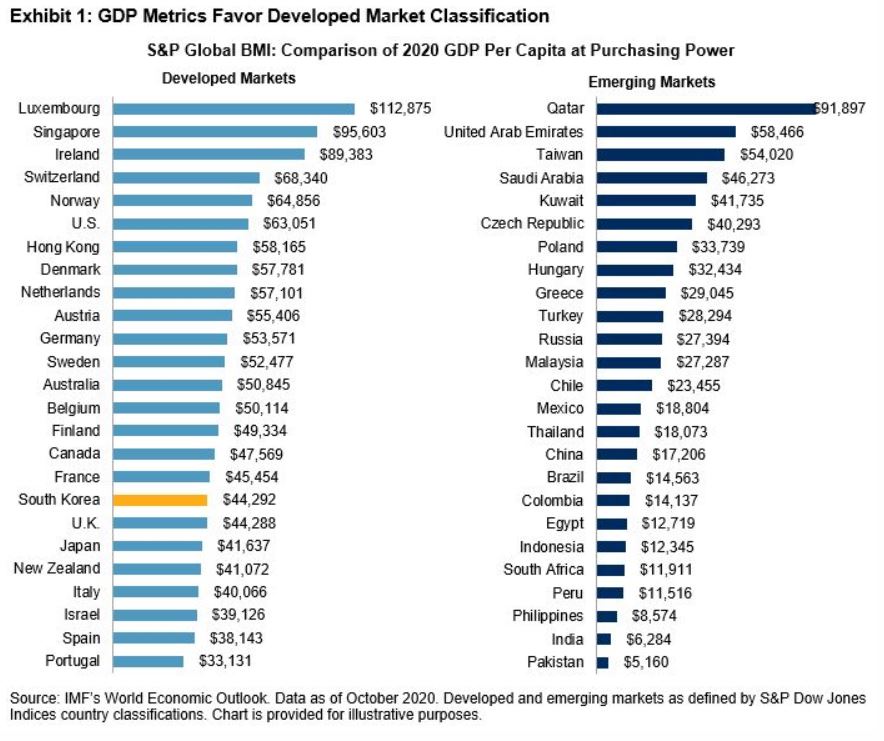 Viewed through the lens of company revenues on a geographic basis, the largest South Korean companies overwhelmingly gain revenues from developed economies. In comparison, the largest companies based in less-developed countries gain nearly all their revenues from other emerging economies. Therefore, the inclusion of South Korea in an emerging markets index leads to less underlying economic exposure to typically faster-growing emerging economies. A notable example of this phenomenon is Samsung Electronics, which is based in South Korea and derives approximately 59% of its revenue from developed markets and is the fourth largest position in MSCI Emerging Markets.

While excluded from the S&P Emerging LargeMidCap, South Korea represents an outsized weight of 11.9% in MSCI Emerging Markets, potentially crowding out less-developed markets from the benchmark. 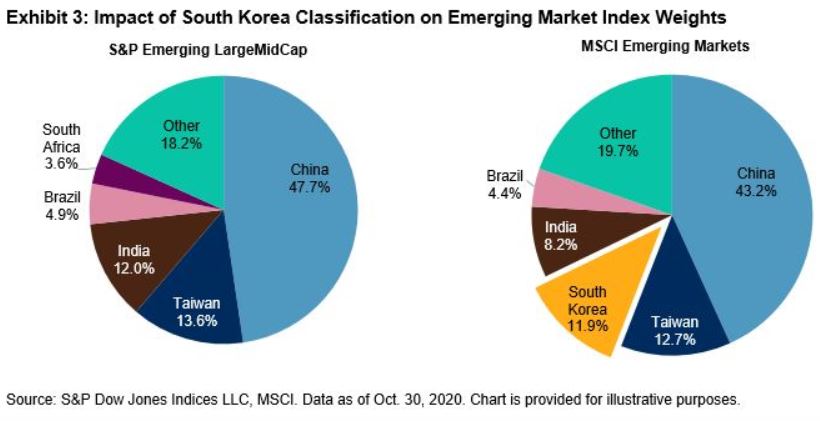