A Global Macro Look Back at Commodities in 2020

The relentless rise of gold prices is in focus this week in S&P Global Platts editors’ roundup of energy and raw materials trends. Plus, freight rates react to Brent’s slight recovery, coal generation in Germany fizzles out, and more. 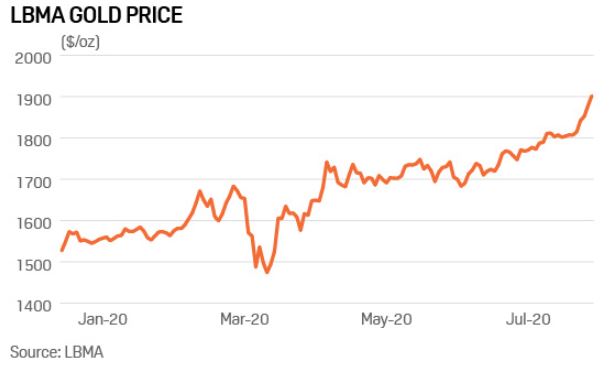 What’s happening? Gold pushed higher July 27 early in the European trading day, and took down the previous all-time high of $1,921/oz. Safe-haven buying has continued to spur the metal higher, boosted by a weaker US dollar, continued uncertainty regarding the US’s response to COVID-19, the probability of another multi-trillion US economic stimulus package, and the colossal global debt stimulated by central banks and governments worldwide.

What’s next? With the above factors likely now to be priced in, momentum may decrease with the yellow metal susceptible to short-term pullbacks. However, with rising inflation expectations as well as unprecedented fiscal stimuli and increasing government debt, many investment banking and financial services have increased their gold price forecasts for Q4 2020 as well as 2021. The elusive $2,000/oz mark may potentially materialise sooner than later. 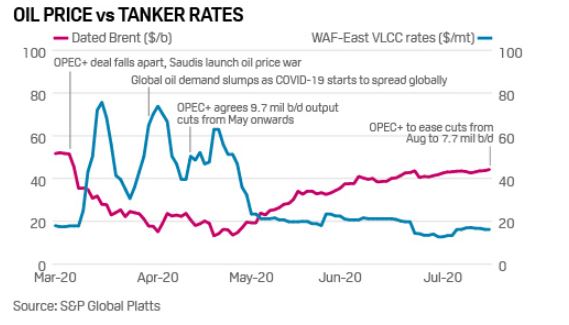 What’s happening? Tanker freight rates nosedived after experiencing a floating storage bonanza in April which saw rates for VLCCs on a WAF-East voyage near record-highs of over $70/mt in early April.  A pick up in crude demand has seen Dated Brent prices recover from the April lows, but on the sea, this has served to worsen floating storage economics.

What’s next? According to S&P Global Platts Analytics, freight rates on the dirty tankers market will likely remain under pressure until OPEC+ cuts are reversed. OPEC and its allies aim to ease its 9.7 million b/d production cut to 7.7 million b/d in August, but even then, it remains to be seen how the improved production profile translates into seaborne exports. 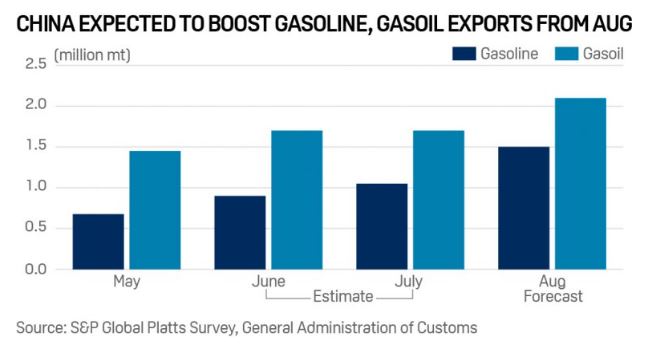 What’s happening? Since June, 23 provinces in China and Chongqing municipality have been suffering from heavy rains and floods. As a result, the regions’ transportation, construction and broader industrial activities came to a grinding halt, putting the brakes on domestic fuel demand recovery. Despite the setback, Chinese refineries have been maintaining high run rates in order to digest record-high crude imports, prompting oil product inventory to surge.

What next? The glut of fuel inventory has put a lot of pressure on China’s major exporters to actively seek overseas outlets to clear their excess supplies at home. China is expected to export 1.3 million-1.5 million mt of gasoline in August, while gasoil exports could possibly hit 2 million mt. In comparison, China exported only 676,000 mt of gasoline and 1.45 million mt of gasoil in May, latest data from General Administration of Customs showed. 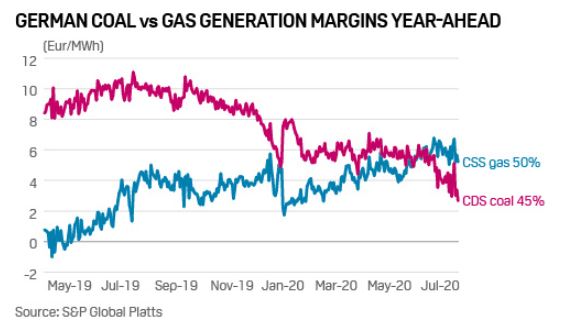 What happened: German year-ahead coal-fired generation margins hit record lows this month while comparable gas-fired margins edged up. Behind the reversal of fortunes is a 30% fall in year-ahead TTF gas prices in 12 months, while the price of front-year coal into Europe has only fallen 12%. European carbon prices, a key driver of coal burn, hit a 14-year high July 13, easing since but remaining historically high. The trend has prompted RWE and Uniper to return mothballed gas plants to service while Vattenfall has booked a $1 billion impairment on its Hamburg coal plant, commissioned in 2015.

What’s next: German coal plants face closure under the country’s exit law approved July 3. A first auction for closure compensation for 4 GW of hard coal capacity is expected this September, the process targeting older units no longer in the market. Further auctions in the coming years will reduce capacity from 20 GW to a maximum of 8 GW by 2030. German hard coal generation only accounted for 6% of the power mix in H1 with 2020 coal imports set to shrink by up to 40%. 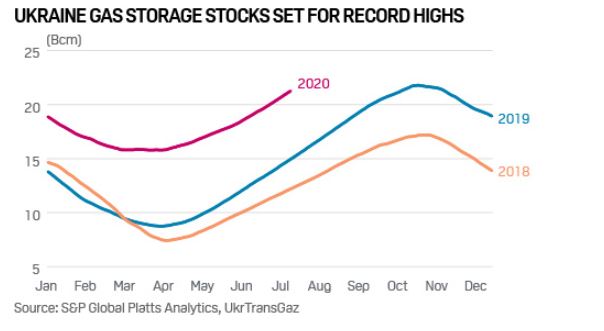 What’s happening? In June, Ukraine’s gas grid operator GTSOU blindsided European gas traders with an announcement that maintenance would take place on a pipeline bringing gas via Slovakia into Ukraine at the Budince interconnection point between August 11-October 1, spanning part of the traditional stock-building season. But GTSOU has now shortened the work period to September 1-21, meaning that gas traders who bought gas for August delivery in the hope of injecting it into Ukraine’s under-utilized gas storage facilities via Slovakia will now be able to do just that.

What’s next? The shortening of the maintenance period comes as Ukraine continues to market spare capacity in its storage sites. According to data from UkrTransGaz and S&P Global Platts Analytics, Ukraine held 21.3 Bcm in stock at the beginning of Week 30, up 42% from a year ago and already close to the record high stocks of 21.8 Bcm set in late October last year. Ukraine can hold close to 31 Bcm in stock, and with injections set to continue through August, gas reserves in the country are likely to be significantly higher than in previous years. Importantly, the storage sites are able to act as a European gas storage “overflow”, given that stocks in the EU are currently 84% full.