Preparing an Insurance Company to Address Risks from Climate Change

Global reinsurers saw losses from natural disasters rise materially to $54 billion in 2016 from relatively low levels of $36 billion in 2015 and $42 billion in 2014, according to Aon's 2016 Annual Global Climate and Catastrophe Report. This increase has weakened the industry's 2016 underwriting profitability, and we anticipate that earnings volatility will intensify if annual claims keep moving toward levels that are closer to the long-term average (for reference, AIR Worldwide estimates the long-term annual average at up to $80 billion).

In analyzing global reinsurers' catastrophe risk exposure in 2017, we observe that the sector's extremely strong capital adequacy continues to provide some cushion to the industry, but also that some reinsurers are more exposed and sensitive to the risk than others. Given that prices are continuing to soften across all lines of business and global property catastrophe prices were down about 4%-6% during 2017 renewals, we consider that exposure to catastrophe risk is an additional pressure point on profitability, and reinsures that are overexposed might see deterioration of their competitive position over time.

Capital At Risk Is Slightly Reducing As A Percent Of Equity, But Earnings Exposure Is Up

Global reinsurers' exposure to unpredictable and high-severity natural catastrophe events is a major driver of reinsurers' earnings and capital volatility. Our view of the reinsurance sector's average risk position as high, as defined in our credit rating analysis, reflects this exposure. We find that the contribution of catastrophe risk to a reinsurer's capital volatility is, indeed, relatively high as measured by earnings-at-risk exposure to a 1-in-10-year annual aggregate net loss and by capital-at-risk exposure to a 1-in-250-year annual aggregate net loss (see chart 1).

On average, we estimate that capital-at-risk exposure for reinsurers accounts for 30% of shareholders' equity in 2017, which is slightly below last year's 31.5%. We observe that on average the increase in exposure has been more than supported by capital growth, with very few players taking on additional catastrophe risk as of January 2017. We even notice that around one-half of the reinsurers we rate (see table 1) reduced their exposure in absolute terms. Higher reliance on retrocession in 2016 has clearly contributed to this trend, with about 40% of the catastrophe business being retroceded on average in a 1-in-250-year return period. The derisking trend has been particularly visible in North America in the last couple of years (see chart 3), as cedents continue to benefit from softening in price and selectively in terms and conditions.

In the next couple of years, we expect that reinsures will continue to shy away from property catastrophe business, and we consider upticks in risk appetite are unlikely, considering that further price decline in this space has been visible during 2017 renewals. 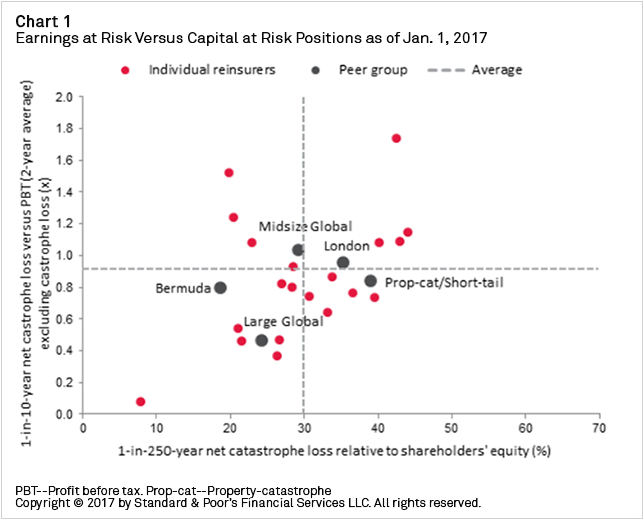 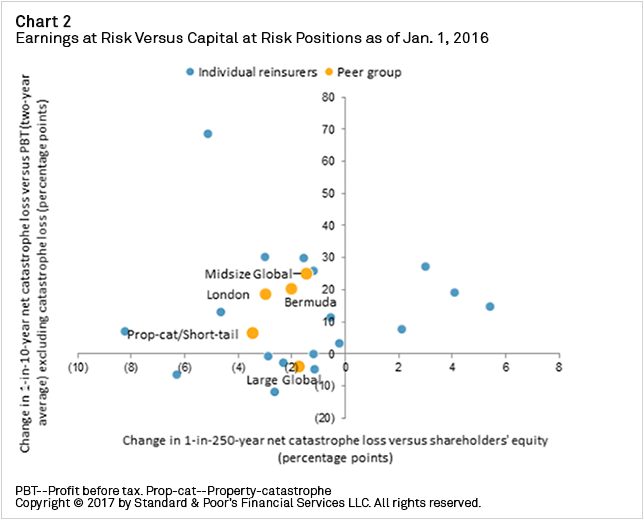 While capital sensitivity is somewhat reducing, we observe that exposure to recurrent events is rising at a faster pace than earnings (see chart 2, which highlights exposure movements since January 2016); the earnings-at-risk metric, which we define above, has materially increased to 0.85x in 2017 from 0.69x in 2016. We now consider that seven out of the 20 reinsurers we rate might experience erosion of their capital base due to an annual aggregate loss in the 1-in-10-year return period range in 2017, while in 2016 we did not project any to be at threat. In light of these figures, we anticipate that the industry will likely experience higher earnings volatility. Absent any defensive measures to offset volatility, negative ratings pressure on reinsurers that appear overexposed could build, due for example to our view of a weaker risk position. 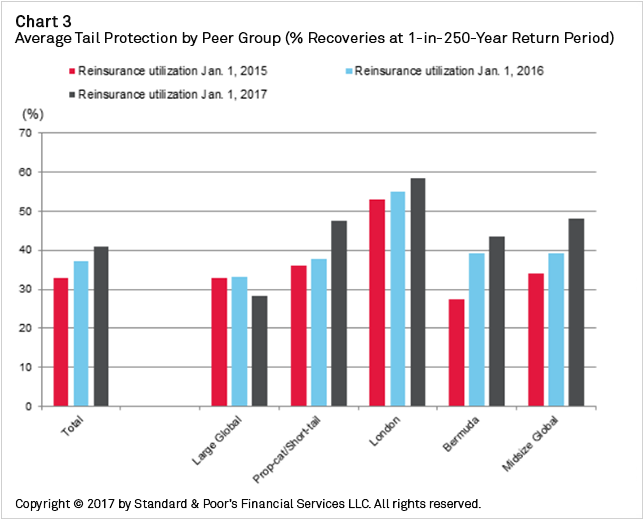 Declining prices in reinsurance lines outside property catastrophe are pressuring global reinsurers' underlying technical profitability. The likelihood that natural catastrophe loss activity will push underwriting results into negative territories is rising as a result. Based on 2016 combined ratios, we assess that, on average, an annual aggregate catastrophe loss of 13% (as a percentage of combined ratios) would result in an underwriting loss. This is a loss 8 percentage points below that implied by 2012 profitability levels (see chart 4). Based on our calculations, it is now twice as likely that the industry would suffer combined ratios above 100% due to natural catastrophe as it was four years ago (see chart 5 for more details). 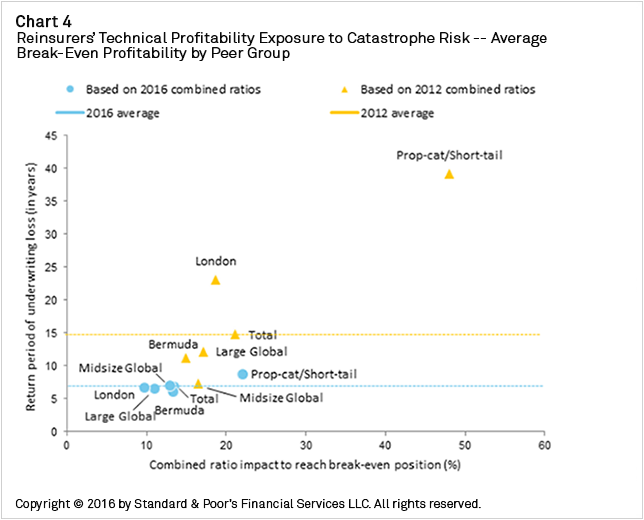 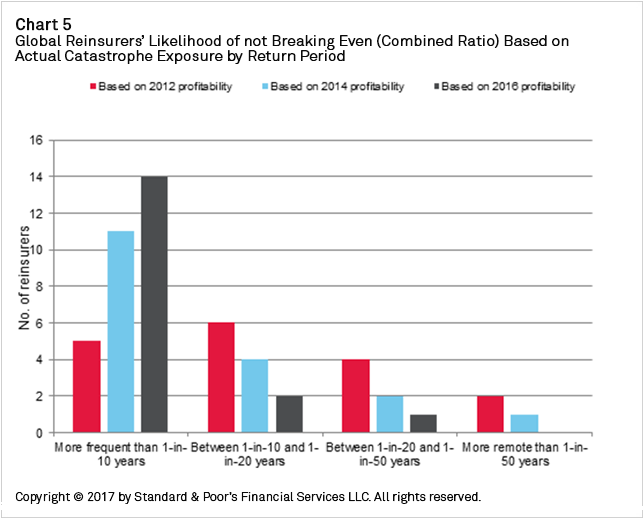 Excess Capital Is Providing Some Cushion

Our stress tests of different severities of potential catastrophe losses, which we conduct annually for each reinsurer we rate, show that a 1-in-250-year annual loss year could reduce the capital adequacy of the reinsurance industry to a level commensurate with a rating in the 'A' category from an extremely strong position (see charts 6 and 7). In that case, the capital adequacy for about two-thirds of reinsurers would remain above 'BBB'. Reinsurers that are most exposed to these extreme scenarios include some Bermudian reinsurers with a high focus on property catastrophe business, and some London players that have a relatively low level of capital adequacy and a slightly higher appetite for catastrophe risk than peers. 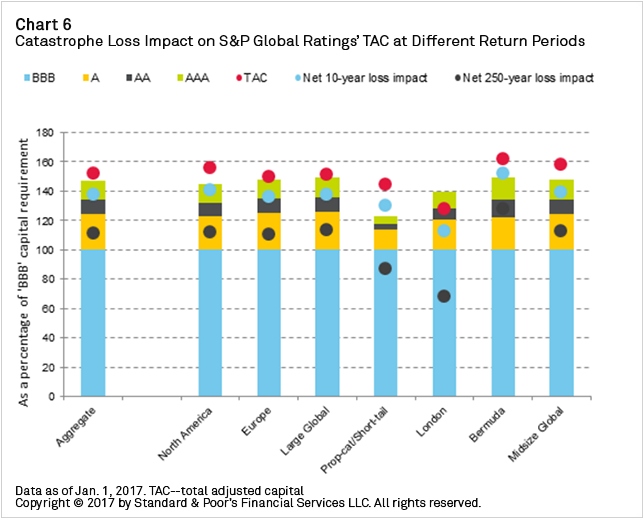 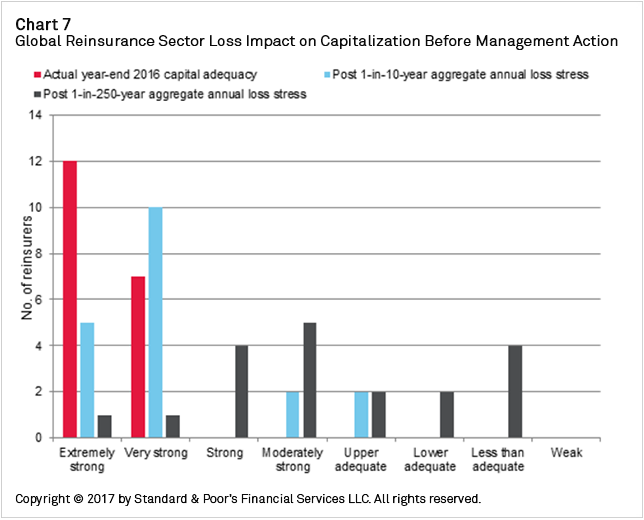 Reinsurers are navigating challenging business conditions by prudently managing their balance sheet exposure to property catastrophe risk. As long as weak business conditions persist, we expect they will continue limiting their exposure by using retrocession protection or reshaping their portfolio for instance.

Nevertheless, as margins compress, more-frequent catastrophe losses will become a bigger threat to underwriting profits and capital than they were in the past. Reinsurers are therefore likely to see heighten volatility in their earnings, in our view. Those more exposed might have to rethink their appetite for property catastrophe risk in order to sustain their earnings and capital base, as well as defend their competitive positions.