What is the future for plastics?

A sea of challenges: The impact of IMO 2020 on petrochemicals

Global petrochemical markets are bound to face numerous challenges in the second half of 2019 with the dispute between superpowers and the emergence of China's new mega refineries impacting trade flows, demand-supply dynamics and currency fluctuations. With more new capacities coming on stream soon, turmoil may be the new norm in global markets.

Aug. 14 2019 — The global petrochemical industry is heading into the second half of 2019 caught in a whirlwind of volatile crude oil prices, ongoing trade disputes and geopolitical tensions. International upheaval has shaped trade flows and price movements in the first half of the year alongside another major trend – the rise of new petrochemical plants as additions to upstream refineries in China.

China’s new mega-refineries, as well as new capacity in Southeast Asia, seek to bridge gaps in key upstream and downstream supply chains and have upended established trade flows into China, while also affecting prices and product margins associated with upstream petrochemicals such as isomer-MX and paraxylene. The trend is expected to continue for the rest of 2019, with further capacity due online in the coming months.

US trade disputes with China and Mexico have also upset global supply, with tariffs and counter-tariffs forcing producers of various petrochemicals to look for new markets and possibly disrupt long-established supply chains if traditional routes are closed or too costly.

Refinery outages in various regions have further redirected export flows between Asia, the US and Europe. With some markets facing oversupply or lack of demand, due to both the trade disputes and additional Asian capacity, there was a general bearish trend in the first half of 2019, and this is expected to continue into the later part of the year.

Geopolitics in the Middle East, notably US sanctions on Iran, have also interrupted some global oil flows, while continued shale-led surplus olefins production further cements the US’ position as the global price floor for many petrochemicals.

Finally, recycled polymers are expected to gain an increasing foothold, especially in more developed economies, as global brands embrace sustainability under growing pressure from consumers, the media and environmental policy.

Global trading continues to be a key characteristic of the benzene market, with unexpectedly firm demand from the United States providing a welcome relief as traders sought to move North Asian and European benzene there over the second quarter.

Despite healthy buying interest from the US market, China’s import volumes have fallen sharply over the first half of 2019, with the country importing just 132,000 mt in May, a 60% decline from January’s import volumes.

Moving into H2, the strength in US demand may lose some steam and not continue into Q4, while CFR China demand will remain dependent on the fluid demand-supply dynamics in the domestic market.

Will the US continue to support demand for global benzene? A key contributor to the firm demand this year has been limited domestic production from the US, as higher toluene prices translated to poorer margins for toluene conversion unit operators and less domestic benzene output, as units were either shut or continued to run at reduced rates. The negative margins had impacted over 2 million mt of benzene production, S&P Global Platts data showed.

Given that approximately a quarter of benzene produced in the US has toluene as a feedstock, any movement in the price of toluene in the US will affect benzene. Due to the seasonality of gasoline consumption in the US, demand for toluene as a blendstock typically increases during the summer months. With conversion margins poor at the start of the second half of the year, toluene has been largely supported by gasoline demand. This demand will inevitably fade with the onset of Q4 and toluene prices will be pressured lower, while toluene disproportionation, and selective TDP margins should improve. If margins stay firm for an extended period of time, domestic benzene output should increase as well.

However, benzene demand has been dented going into H2 as higher prices resulted in demand destruction downstream. In H2 June, benzene became more expensive than styrene and multiple styrene producers acknowledged that they had cut rates and were only producing to meet contractual obligations. “I’ve eliminated my open/spot positions. I’ve no incentive to produce extra material,” a source told S&P Global Platts. While details and confirmation were not immediately available, participants also suggested that cumene makers had cut rates as well.

During the latter half of 2019, the expectation is that US benzene supply will remain tight throughout Q3, and that tightness will be alleviated by a steady stream of imports, prompting expectations of prices correcting heading into Q4. The question is exactly how much downward pressure will prices face with the start up of new benzene capacities and amid expectations that toluene conversion margins will ultimately improve. If run rates of conversion units improve at a time when derivative demand is lagging and the market is flush with imports, benzene prices could remain soft headed into 2020.

At the same time, prices could move higher should the trade dispute between the US and China or the Middle East conflict be resolved.

Demand from China hinges on the growth of domestic supply

With the start up of mega refineries in China, import volumes are expected to decline, but by how much remains uncertain.

Downstream producers requiring benzene with unique specifications, as well as buyers with production plants located along the coast of China, are likely to continue importing benzene from traditional producers in Asia. On the other hand, demand from traders would be contingent on the spread between domestic East China prices on an import parity basis and CFR China prices. The spread has been volatile and inconsistent, making it difficult for traders to confidently work the arbitrage. The average spread between domestic and CFR China benzene in H1 stands at minus $18.50/mt, keeping the arbitrage firmly shut.

As a result, inventories have been declining steadily going into H2, hovering at year-to-date lows in early July. Amid tightening supply, China Petroleum & Chemical Corporation, or Sinopec, a major benzene producer in China, whose listed price is the basis for the bulk of term contracts in East China, has increased its listed price four times in H1 July, a Yuan 100/mt upward adjustment each time.

A key event expected to shake up the supply-demand balance in China is the start up of Zhejiang Petrochemical in Zhoushan, a free-trade zone in China’s eastern Zhejiang province. Phase 1 of the refinery has a nameplate capacity of 970,000 mt/year of benzene from its aromatics unit, while downstream products produced at the same plant and from benzene as feedstock include 1.2 million mt/year of styrene, 400,000 mt/year of phenol and 100,000 mt/year of acetone.

Thus, the plant’s total demand for benzene is approximately 1.5 million mt/year. With this, the plant is expected to be net short on benzene. Assuming that all units operate at full run rates, demand from China could be higher in H2.

With Petronas’ Refinery and Petrochemical Integrated Development, or RAPID, complex in Johor, Malaysia, and Hengyi’s refinery in Brunei expected to reach commercial operations in H2, the nameplate supply from Southeast Asia could grow by an additional 667,000 mt/year.

While it remains unclear whether all of this volume will carry a Form E advantage into China, market sources acknowledged that there would be more supply of tax-free benzene, resulting in an increased competition between the various supply sources.

On the demand side, with Indonesia the only net-importer of benzene in Southeast Asia, and the country’s PT Trans Pacific Petrochemical Indotama to cease production of aromatics in August, demand from the country is expected to be higher in H2.

Net-long Europe offered potential relief from turnarounds In Europe, upcoming cracker maintenances from August through September signals that benzene production could be curtailed in H2.

“This might be a welcome relief for a long market,” a benzene trader said.

Benzene supply in Europe has exceeded that of demand in H1 and this demand-supply dynamics may continue into H2. A return of demand from the paraxylene sector and workable conversion rates for toluene disproportionation would result in the US and Asia producing more benzene and sparking more export volumes to head into Europe from the Middle East as trade patterns are disrupted. 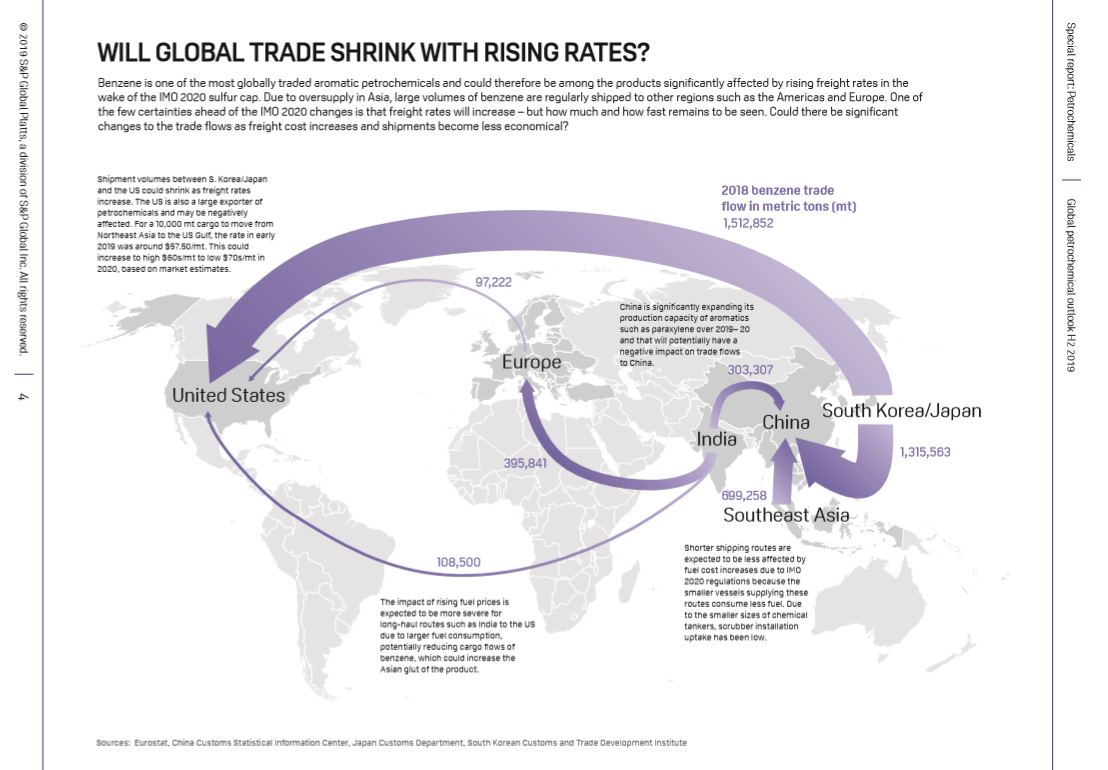