Amid dark clouds, there are silver linings for oil in Asia: Fuel for Thought


ESG and mining: sustainability after coronavirus

As the world battles the coronavirus pandemic and resulting economic fallout, industries of all types face the urgent challenge of securing their short-term financial future.

But the debate about environmental, social and governance concerns has been far from drowned out by the global health crisis, even taking on new meaning as companies’ responsibilities toward worker and community health came to the fore.

For the mining sector, ESG was undoubtedly a business buzzword in 2019, but its main thrust was the environmental pillar. The spread of coronavirus and the impact on societies across the world appears to have refocused the interpretation of ESG on all three components, pointing to a more holistic approach than that taken previously.

The Corrego do Feijao mine’s No. 1 tailings dam in Brazil suffered a catastrophic failure on January 25, 2019, leaving 259 confirmed dead and 11 others reported as missing, whose bodies have never been recovered. The news sent shockwaves through the mining industry, as iron ore giant Vale admitted liability for failings around the storage of slurry.

Earlier this year Brazil’s National Mining Agency ordered the immediate closure of 47 iron ore tailings dams for which stability was not certified, with more than half of them owned by Vale and its affiliates.

This led to the creation of the Investor Mining & Tailings Safety Initiative, chaired by the Church of England Pensions Board and the Swedish Council of Ethics of AP Funds.

The initiative is an institutional investor-led engagement, including major asset owners and asset managers, with the mining sector on best practices. 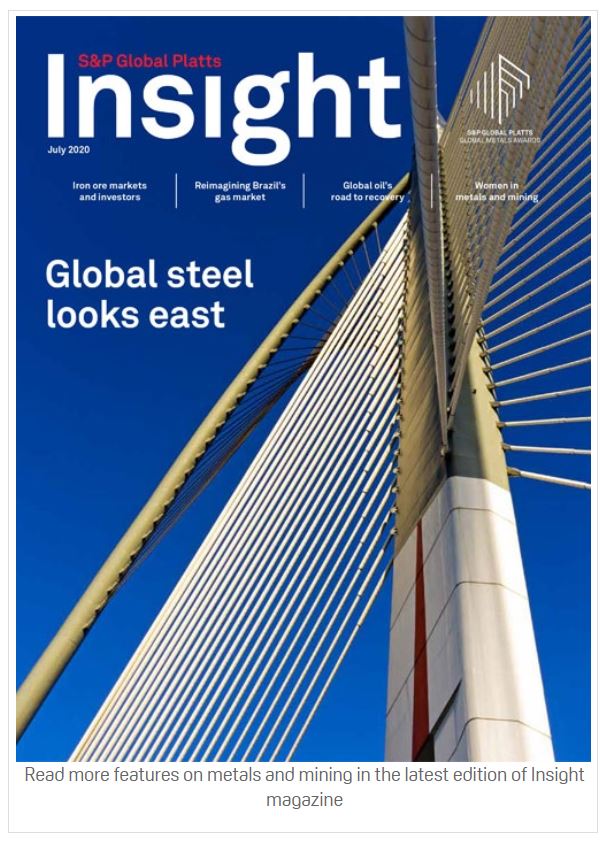 Good progress is being made on the development of an international tailings standard, despite the global disruption caused by the coronavirus pandemic, Adam Matthews, a director on the investment team at the Church of England Pensions Board, told S&P Global Platts.

As the mining industry continues at pace to dig up minerals required for the decarbonization of the world’s energy needs, alongside traditional demand, one result will be mountains of waste. Matthews said that the mining industry required a “global” tailings standards to prevent future humanitarian and environmental disasters.

On the subject of the current pandemic and its impact on ESG, Matthews said society “shouldn’t drop the ball” and had to continue to address the most pressing issues to create a sustainable future.

“We are all part of society … [and] must acknowledge [our] connection to the financial [investments we make],” he stressed, underling that everyone has a responsibility to act.

He noted that discussions on the evolution of the tailings standards continued, and he was hopeful of a more concrete announcement later in 2020.

Meanwhile, Principles for Responsible Investment (PRI), working with the International Council on Mining and Metals and the UN Environment Program share a common commitment to the adoption of global best practices on tailings storage facilities.

It is impossible to ignore the fact that investors are turning up the heat on how companies operate. The financial press is awash with stories of investor activism, and as those headlines multiply, so the need for companies to react grows ever stronger.

Global diversified natural resources firm Glencore has faced pressure over the reappointment of ex-BP CEO Tony Hayward owing to his handling of the Deepwater Horizon oil rig explosion a decade ago. At the company’s annual general meeting in May, Hayward was re-elected with less than 4% of votes opposing the resolution, but the attempt to mobilize against him appears to reflect a growing trend.

Environmental campaign group Market Forces said that at Rio Tinto’s AGM in early May, 37% of shareholders voted against the board on a proposal calling on the miner to set greenhouse gas emission targets aligned with the Paris agreement. Although that meant the resolution failed, Market Forces said the vote in favor of the emissions policy represented a 6% increase on a similar proposal presented a year earlier.

On the subject of what the mining sector is doing to comply with increasing ESG mandates from investors, Fiona Reynolds, CEO of ESG body PRI said that market engagement had been “mixed” and the business still had some way to go. She said that from her experience it is investors who are driving natural resource companies to change their practices.

“I think without the shareholder pressure, miners would have come kicking and screaming,” Reynolds added. While investors have a strategic role to play in ESG matters, so does business, and both need to collaborate for success, she added.

This was echoed by CoE’s Matthews, who said that the “sweet spot” in ESG progression was when investors and business collaborated, creating potentially “powerful partnerships.”

According to consultancy Alvarez & Marsal the wave of investor activism across Continental Europe will continue to increase in 2020 as activists adapt their tactics to different markets and sectors.

Its analysis shows that the UK remains the largest market for activists, “home to 54 of the 158 European companies which are predicted to face imminent risk from public activist campaigns.” The consultancy also noted the growing importance of ESG metrics as a rationale for investor activism.

As global governments pour unprecedented levels of fiscal stimulus into markets to support people who have had their livelihoods devastated, there is a degree of fear that sustainability could be sidelined as the world adapts to the new normality.

A global recession is unfolding, one that is predicted to be deeper than the Great Depression, albeit far shorter.

Indigo Ellis, senior analyst and head of Africa research at Verisk Maplecroft, told Platts that the sheer volume of fiscal stimulus raises alarm bells of deeper issues further down the line, as sovereign debt balloons. “Across the world debt issuance is astonishing,” the analyst said. She is worried that in developing nations the attention on ESG will be postponed, as countries look for increased investment and easier ways to facilitate that. Ellis stressed that environmental matters could see “short-term erosion” but that further out the sustained focus on ESG issues wouldn’t change.

The bigger fear was how long environmental issues were sidelined, and the resulting damage. “Short term could become longer term as the pandemic rolls on,” she told Platts. Still, Ellis, like the others, believes that further out ESG remains critical to investors and the way they deploy cash. “S will be the most pertinent for Africa, and will drive the E and G.”

But Ellis is concerned that as developed countries push ahead with ESG plans post-pandemic, the lag in Africa’s response as it deals with humanitarian issues could muddy supply chains. With the bulk of the world’s cobalt, a key ingredient in electric vehicle batteries, coming from the Democratic Republic of Congo, the risk of child labor slipping into the European supply chain is potentially amplified.

Nevertheless, there are some signs that major actors are taking this type of risk seriously. In late 2019 the London Metal Exchange announced a set of requirements it hopes will set a level playing field for small-scale and large-tier miners.

The LME’s requirements, which will apply to all its listed brands, are based on four core principles: the combination of transparency and standards; non-discrimination between large-scale mining and artisanal/small-scale mining; adherence to well-established work in the sector; and a pragmatic and clear process, it said. The responsible sourcing requirements were formulated following a formal market-wide consultation on proposals underpinned by the Organisation for Economic Co-operation and Development Due Diligence Guidance.

The LME concluded from its research that artisanal miners should not be cut out of the equation, as this would simply undermine the importance of well-governed small-scale mining to growing economies, notably in Africa.

Then, almost overnight, the coronavirus pandemic closed down society and upended normal life for a large proportion of the globe.

The question is whether the interpretation of ESG has now changed, and how society will push it forward for a more sustainable future. Gold major Barrick CEO Mark Bristow said that for him ESG simply means sustainability.

“ESG is, and always has been, a core part of our business. Recognizing our broader stakeholder base, not just shareholders, but employees, business partners, host governments and local communities as well, has always been at the heart of all our activities,” he said.

Bristow has been a longstanding advocate of what is now termed ESG, but feels that environmental concerns are sometimes overemphasized.

“Sustainability is equally, if not more, important. You can’t fight climate change if you don’t address the problem of poverty and the need for business to support economic development in its host countries and communities,” Bristow added.

The impact of the pandemic on the social aspect of ESG has been underscored in recent months.

He stressed the importance of “social” pillar in ESG: “It’s important that people are not left behind in society. Poverty is as bad for the environment as anything else. We need to wake up to a global vision.”

This is echoed by former CEO of Vedanta Zinc International, Deshnee Naidoo, who said that the crisis does not change that path that the industry is on.

“Without the S [for “social”], we won’t actually have a business that will be sustainable enough to worry about compliance with the other two [elements, environment and governance].”

Still, without good governance, and ultimately leadership, the social and the environmental components could fail to be correctly communicated and therefore implemented.

Beth Burks, associate director of sustainable finance at S&P Global Ratings said that governance is just as important a pillar of ESG, even though the focus is often on the other two elements. Burks and the Ratings team use governance as one of the main gauges for their analysis of ESG.

“In our view, strong ESG performers with stakeholder-focused and adaptive-governance structures are likely to remain resilient amid the rapidly changing dynamics caused by the outbreak.” Burks highlighted that the pandemic would likely act as a catalyst for companies to dig deeper into the requirements of ESG, and associated compliance, rather than shying away.

However, the analyst did say that near-term capital requirements, due to the recession brought on by the global shutdown, could act as a distraction. The current crisis presents an ideal opportunity to take stock and re-evaluate current practices. Whether it spurs an acceleration of ESG milestones, or generates more talk than action, remains to be seen.