Wall Street is not immune to the implications of COVID-19.

Market observers have noted the remarkable resilience of financial markets in the face of the pandemic and associated lockdowns. Even after a sell-off earlier in the month, the S&P 500 benchmark equity index is up approximately 44% since it bottomed out in late March.

For JPMorgan Chase’s corporate and investment bank division, revenue is expected to be up 20% year-over-year, according to Chief Financial Officer Jennifer Piepszak, who provided the guidance while speaking at the recent Barclays Global Financial Services Conference. New special-purpose acquisition companies—under which stakeholders raise capital through markets for a publicly traded shell company to be used in purchasing a private company that takes its place on a U.S. equities exchange—have accounted for nearly half of all IPOs from January through Sept. 11 and garnered proceeds of $36 billion, nearly three times the $13.31 billion in proceeds raised during such IPOs last year, according to S&P Global Market Intelligence data.

"If you look where most of the economic damage was, it was and still is in smaller businesses and Main Street-type businesses that don't necessarily trade on the equity market," Bank of Montreal Senior Economist Robert Kavic said in a Sept. 25 interview with the CBC, Canada’s national public broadcaster, suggesting that the scale of most publicly traded companies gave them protection against the worst of the downturn. "You don't have a hair salon or a restaurant trading on the Nasdaq."

The volatile but rallying performance of financial markets since March’s low, alongside continued strong earnings from Wall Street’s investment-banking divisions, may have lulled firms into feeling a false sense of immunity from other effects of the pandemic.

Employees at JPMorgan Chase, Goldman Sachs, and Morgan Stanley have been encouraged to return to their offices.

“Going back to work is a good thing,” JPMorgan Chase CEO Jamie Dimon said Sept. 15 at the Singapore Summit. He returned to the office in June, despite recovering from recent heart surgery, with his senior leadership team and has been vocal on the need for employees to return to physical workplaces.

It makes sense to “carefully open up and see if we can get the economy growing for the sake of everybody,” Mr. Dimon added. “We’re saying these places are clean. We’ve got social distancing” in JPMorgan Chase’s offices.

JPMorgan Chase is moving forward with plans to bring back as many as 50% of employees at its New York headquarters next month. Goldman Sachs is planning a similar return to the office, with some flexibility to allow for rotational working schedules and social distancing. Citigroup will begin increasing its New York-area office capacity starting next month, capped at 30%, while Wells Fargo will keep its workforce out of the office until at least Nov. 1.

“This rotational approach will not look the same for everyone, as we each navigate unique personal responsibilities – for example, planning around adjusted school schedules, managing personal and family health conditions, and not being comfortable commuting to the office during peak hours, among many other considerations,” Goldman Sachs CEO David Solomon said in a Sept. 23 memo to employees.

The transition from working at home to being on the office carries risk. In the past month, JPMorgan Chase, Barclays, and Goldman Sachs have had to quarantine groups of traders who had returned to the office and ultimately tested positive for coronavirus.

“Our people’s safety is our first priority, and we are taking appropriate precautions to make sure our workplaces remain safe for those who choose to return,” Leslie Shribman, a spokeswoman for Goldman Sachs, said in a statement to Crain’s last week.

Today is Monday, September 28, 2020, and here is today’s essential intelligence.

In a year of high volatility in the energy basket and more uncertainties than in recent history, S&P Global Platts editors discuss the main aspects that have been supporting Brazilian ethanol prices, despite the turmoil at the beginning of the 2020-21 Center-South crop and plunging demand in 2020. Senior price specialist Nicolle Monteiro de Castro talks with senior biofuels analyst Beatriz Pupo about estimates for Brazilian sugar and ethanol production, consumption, trade flows and price behavior amid COVID-19.

Russia, US Continue To Clash Over Fate Of Nord Stream 2 Gas Pipeline

Russia and the US continue to clash over the future of the Nord Stream 2 gas pipeline, with Moscow hitting out at calls from Washington for the creation of a "coalition" of nations aimed at blocking completion of the project. A little over 150 km of Nord Stream 2 remains to be laid in Danish and German waters, but with the political debate becoming ever more frenzied, it remains unclear how and when the pipeline will be completed. Lloyd's of London should be able to keep up the improvement in underlying underwriting performance it reported in the first half of 2020, according to ratings analysts. But the 334-year-old insurance market's persistently high expense ratio is unlikely to be tackled any time soon. On Sept. 10, Lloyd's reported a loss of £438 million for the first half of 2020, compared with a £2.33 billion profit in the same period of 2019. The loss was mainly driven by a net coronavirus-related claims charge of £2.36 billion. 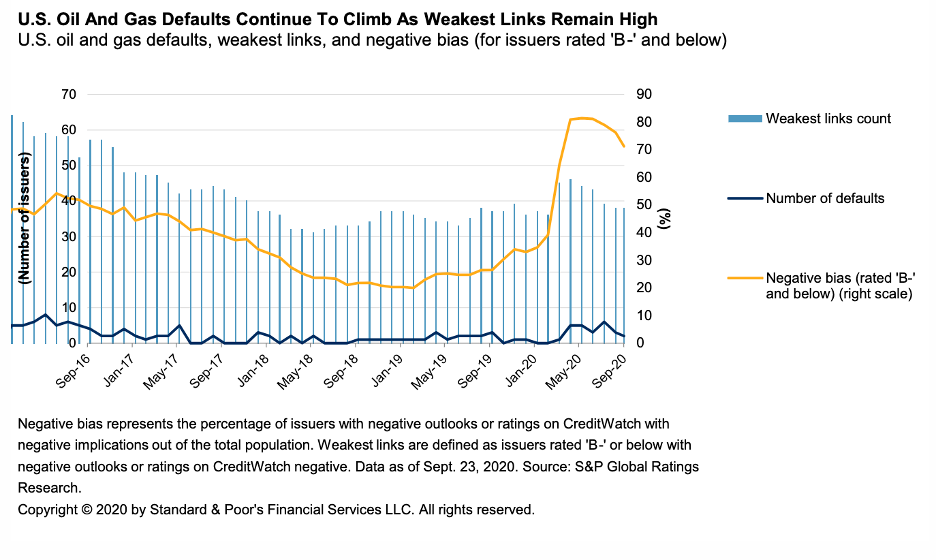 The oil and gas sector leads the overall corporate default tally so far in 2020 with 37. Of these, nearly 70% are from the U.S., where oil demand and prices plunged this year due to excess crude oil supplies and the COVID-19 pandemic. Oil and gas companies were highly vulnerable heading into the crisis, leading the U.S. weakest links tally (issuers rated 'B-' or lower by S&P Global Ratings with negative outlooks or ratings on CreditWatch with negative implications) in December 2019 with 36. 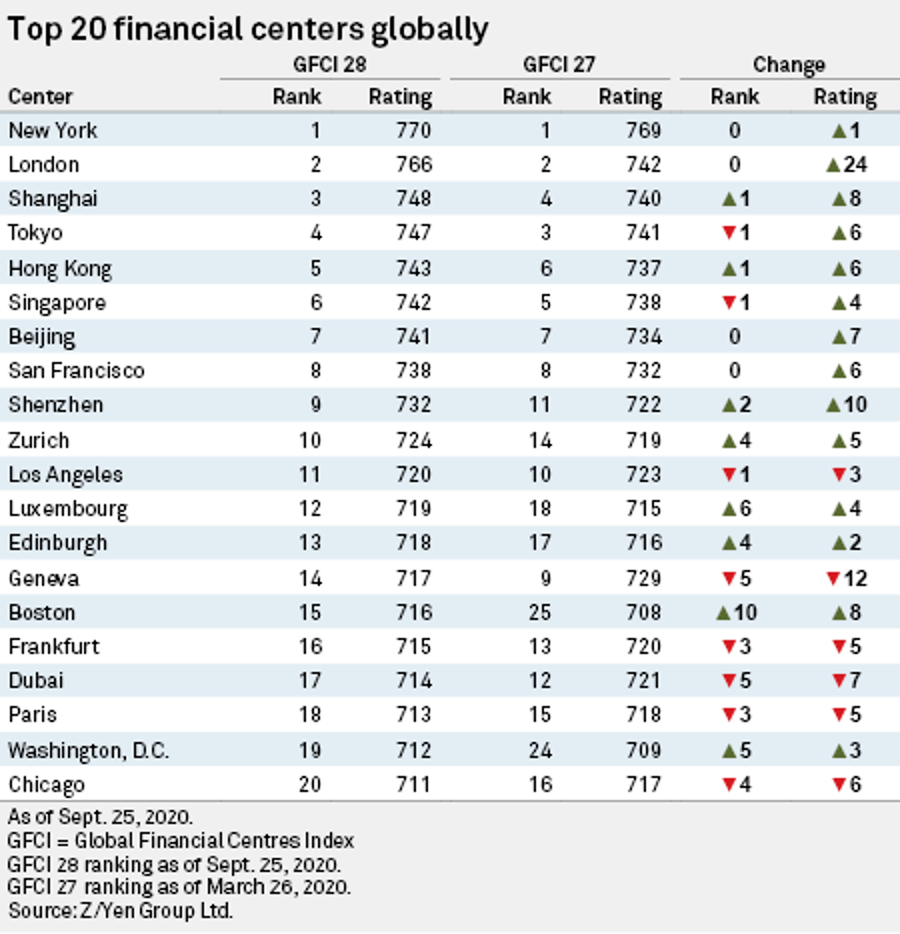 London recorded the strongest gain in rating among the world's top 20 financial hubs in the past six months, as the strong performance of its financial services sector amid the COVID-19 pandemic offset previous concerns due to Brexit, the latest Global Financial Centres Index shows. The index, compiled by the Z/Yen Group in cooperation with the China Development Institute, is released twice a year, in March and September. The latest survey features 111 major global financial centers and assesses five areas: business environment, human capital, infrastructure, financial sector development and reputation. The latest index, its 28th installment, shows 14 out of the top 20 global financial centers recorded a rating increase since March.

If Quibi Is Selling, Analysts Flummoxed On Who Might Be A Buyer The short-form video offering Quibi Holdings LLC promised to change the paradigm of mobile video as we know it. But change is never easy. The company — which offers five- to 10-minute "quick bites" of content, including original films, series, daily news and entertainment fare — is considering strategic alternatives, including a possible sale of the platform, according to The Wall Street Journal. The decision comes, according to the report, after a series of struggles, including a wide miss on projected users and a loss of 90% of its free-trial signups.

'You Have To Rethink These Old Ways': Parting Advice From CAISO's Retiring CEO 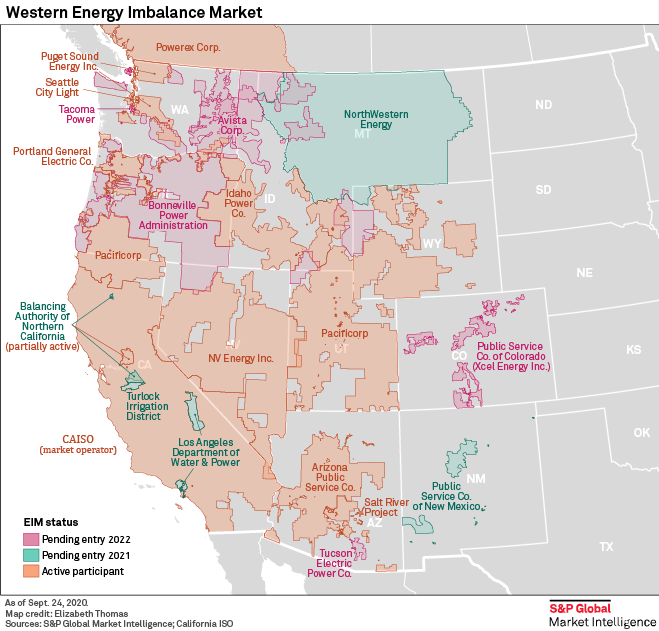 After more than a decade of directing power flows across one of the world's largest and most dynamic economies, California ISO President and CEO Steve Berberich is leaving the state's primary wholesale grid operator at the end of September amid enormous uncertainty over how California will keep the lights on as it accelerates its transition toward an aspired zero-carbon energy future.

By Zeroing Emissions, China Could Shave 11% Off Expected Temperature Rise

China's pledge to zero out its emissions of carbon dioxide could cut the expected rise in global temperatures this century by up to 11%, the largest single reduction ever estimated by the Climate Action Tracker, which monitors progress under the Paris Agreement on climate change. President Xi Jinping of China told the United Nations Sept. 22 that his country aims to halt the rise in its carbon emissions before 2030 and to become carbon-neutral by 2060. The announcement was a "milestone," according to the Climate Action Tracker, or CAT, because it marked the first time that China acknowledged the need to eliminate carbon emissions by midcentury.

Trafigura, one of the world's largest ship charterers, Sept 25 proposed that the International Maritime Organization introduce a carbon levy of $250-$300/mt of CO2 equivalent on shipping fuels, to make zero- and low-carbon fuels more economically viable and more competitive. According to the Fourth IMO Greenhouse Gas Study, published in August, GHG emissions from shipping have increased to over 1.076 billion mt in 2018 from 977 million mt in 2012.

The launch of the S&P 500 ESG Index in April 2019 signaled an evolution in sustainable investing. Indices based on environmental, social, and governance (ESG) data were no longer simply a means for companies to declare their sustainability credentials or tools to manage tactical investments playing a minor role in investors’ portfolios. The S&P 500 ESG Index and other such indices were built to underlie strategic, long-term allocations at the core of investors’ portfolios.

The coronavirus has slammed the retail sector and caused many companies to go out of business. But the pandemic has been a catalyst for growth at Walmart Inc., one of the world's largest retailers. The company's e-commerce sales jumped 97% in the second quarter as consumers hibernated at home and relied increasingly on online shopping. But that growth also means an expanding carbon footprint.

—Listen and subscribe to ESG Insider, a podcast from S&P Global Market Intelligence 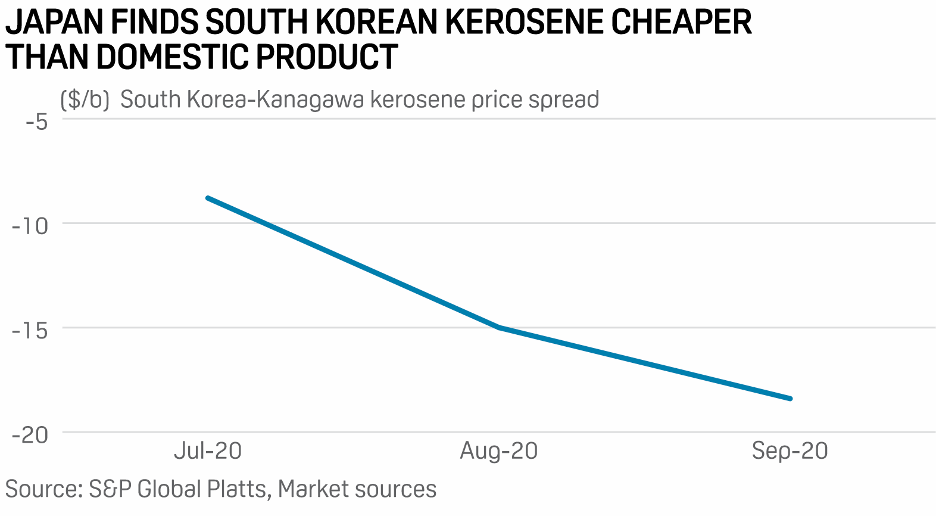 Japanese traders are looking to boost imports of kerosene in the coming months despite the recent growth in middle distillate stockpiles in Hokkaido, the largest demand center for heating oil, as the country is expected to have a colder-than-average winter. Fuel distributors are poised to source most of Japan's heating oil requirements from South Korea as import prices are much lower than domestic.