India’s economy contracted 23.9% year-over-year in the second quarter, adding to the list of countries whose GDP has plummeted at extraordinary rates due to the pandemic’s unprecedented implications.

The decline in the world’s fifth-largest economy was the biggest contraction in any major country thus far in the crisis, according to the Organization for Economic Cooperation and Development.

Consumer spending dropped 27%, and investment sank 47%, according to India’s Ministry of Statistics and Programme Implementation. Construction activity tumbled 50.3%, and manufacturing output fell 39.3%. The country’s services sector, which accounts for roughly 60% of the economy, slumped 20.6%. Agriculture, forestry, and fishing—the only sector to experience growth—advanced by 3.4%.

The deep drop in output follows modest growth in the three-month period from January- March, during which India’s economy expanded at its slowest pace in at least eight years, a mere 3.1%.

Indian President Narendra Modi instated a stringent lockdown with just hours of notice to comply in late March that ultimately kept all non-essential activity at a standstill until March.

In a July forecast, S&P Global Ratings warned that “India's economy is in deep trouble” and projected a full-year 5% contraction due to the country’s “difficulties in containing the virus, an anemic policy response, and underlying vulnerabilities, especially across the financial sector,” with a rebound starting next year. The permanent costs from the pandemic likely to be highest in the country due to the severity of the lockdown.

The country’s housing market suffered its most disastrous decline in the first half of this year, according to the real estate consultancy Knight Frank LLP. "The more significant drivers of housing demand — consumer sentiment and income stability — are not supportive at the current juncture. As and when the economy moves towards normalcy, the [country’s] low interest rate will prove a catalyst for housing demand revival," Knight Frank Chief Economist Rajani Sinha told S&P Global Market Intelligence.

Home to 1.3 billion people, India features the world’s third-highest number of coronavirus-caused deaths. More than 75,000 new infections have been reported in the past five days, according to Johns Hopkins University data. The country recently recorded the most new cases worldwide during the entirety of the pandemic, reporting 85,687 new infections on Aug. 26. Continuing its reopening plans, Indian officials announced on Aug. 30 that the country will restart its subway system, among other lifted restrictions, for the first time in months despite the rapidly growing case numbers.

Today is Tuesday, September 1, 2020, and here is today’s essential intelligence.

Default, Transition, and Recovery: The Gap Between Market Expectations And Credit-Based Indications Of U.S. Defaults Is Growing

S&P Global Ratings’ economists think the U.S. economy will see growth in the third quarter, but high-frequency data paints a mixed picture, which is severely challenging the 22.2% annualized growth rate expected this quarter. S&P Global Ratings also saw both an uptick in defaults as well as a historically high number of downgrades and negative outlook and CreditWatch placements in the second quarter. The pace of downgrades and negative outlooks and CreditWatch listings has slowed significantly since April but is still elevated relative to the pre-COVID-19 pace in February.

The 2020 U.S. corporate default tally has surpassed the 2016 year-end tally of 105, although it's still well below the tally at this point in 2009 of 192 defaults--2016 and 2009 had the highest year-end default tallies in the past 15 years. The U.S. leading defaults is not uncommon because the region is among the most developed credit markets globally and has the largest number of rated issuers, and so naturally will also lead defaults perennially. By sector, oil and gas (21), consumer products (21), retail and restaurants (17), and media and entertainment (17) make up more than 70% of the defaults in the U.S. All four sectors have experienced a significant impact on revenue, earnings, and credit metrics since the onset of COVID-19.

Listen: Street Talk Episode 66 - Community Banks Tap The Debt Markets While The Getting Is Good

Community banks have tapped that debt markets at torrid place in recent months, building capital levels for insurance and flexibility to take advantage of opportunities that could arise amid economic fallout from COVID-19, according to two members of Performance Trust Capital Partners. In the episode, Daryle DiLascia, partner and head of investment banking at Performance Trust, and Brian Leibfried, co-head of client insights and analytics at the firm, discuss what has driven the surge in subordinated debt issuances by community banks, which have nearly matched the levels seen in the full-year 2019, with 80% of the transactions coming in the last three months.

The largest banks in China said their buffer against expected loan losses may stay at elevated levels in the second half of 2020, although pressure on net interest margins may ease, after they reported the sharpest year-over-year decline in their first-half net profit in recent years. Among the nation's five biggest lenders by assets, Bank of China Ltd. reported the steepest drop in net profit for the six months ended June 30, down 11.51% from a year earlier to 100.92 billion yuan. Impairment losses on loans, also called loan-loss provisions in other markets, rose 70% to 60.73 billion yuan from 35.72 billion yuan a year earlier, also the largest increase among major lenders. Its nonperforming loan ratio increased to 1.42% as of June 30, from 1.37% as of end-2019. 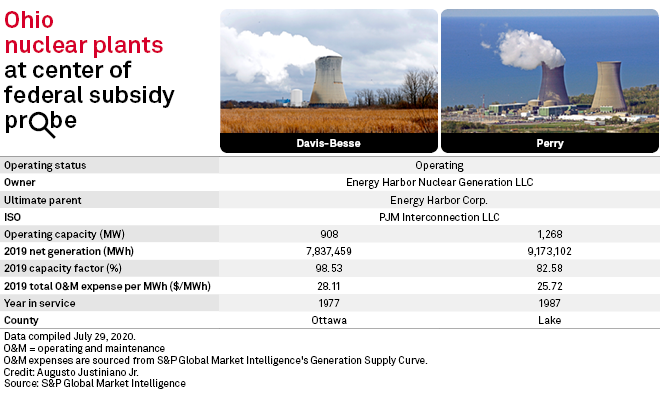 As Wall Street analysts and anxious shareholders continue to wait for more dominoes to fall from a federal corruption probe in Ohio, investor-owned utilities could feel greater pressure to avoid any semblance of improper political activity by voluntarily disclosing contributions to "dark money" groups. “I think there will be efforts to create transparency. I don't know really what is going to end up happening," Glenrock Associates LLC analyst Paul Patterson told S&P Global Market Intelligence, expressing skepticism over a "nationwide movement."

Utilities across the world have been moving very cautiously away from fossil fuels, if at all, over the past two decades, with the vast majority adopting a passive approach to managing their portfolios and only a small share actively shifting to green energy, according to a new analysis. The study found that, among more than 3,000 utilities, only about 14% prioritized growth in renewable energy over gas or coal-fired power plants, while 10% and 2% had their highest growth in gas and coal, respectively. And even among the companies betting on green energy, more than half continued to grow their fossil fuel capacities at the same time.

Barclays announced a new climate policy at the end of March to bring its lending in line with the Paris Agreement on climate change following pressure from shareholders to phase out its financing of fossil fuel companies. The bank had been singled out as a laggard and was the focus of the first shareholder resolution by institutional investors on climate change at a European bank.

S&P Global Market Intelligence spoke to the head of corporate social responsibility at one of France's largest banks, BNP Paribas. In the interview, Laurence Pessez outlined the bank's commitment to end relationships with customers that use coal to generate electricity and its increasing focus on biodiversity in a year marked by the coronavirus pandemic.

The Future for Energy & Commodities US oil and natural gas operators continued restoring production from Gulf of Mexico platforms that had been shut-in in advance of Hurricane Laura as that monster storm barreled through the region last week, although nearly 1 million b/d of oil is still shut in, the federal Bureau of Safety and Environmental Enforcement said Aug 31. Around midday Aug. 31, 989,414 b/d of oil remained shut, or 53.5% of total US Gulf crude production, along with 1.12 Bcf/d of gas, or 41% of total Gulf gas output, according to the daily update.

Chemical plants in Lake Charles, Louisiana, remained shut Aug. 31 in the aftermath of Hurricane Laura, amid widespread power outages, ongoing damage assessments and evacuated employees unable to return home as crews worked to clean up the damage. Both Westlake Chemical and Sasol declared force majeure Aug. 31 on some of the products manufactured at their Lake Charles complexes, according to customer letters that S&P Global Platts obtained.

Backlog in export shipments due to blank sailings coupled with an urgency to evacuate goods amid lockdowns due to COVID-19 pandemic have led to decreased efficiencies at major container terminals in India in the past few months, according to a report published by DMICDC Logistics Data Services (DLDS). The operational efficiency of terminals is typically measured via the export dwell time, which reflects the time a container has spent in the vicinity. The DLDS report has calculated dwell time on the basis of port in time and port out time of a container.

Global oil production is set to peak by 2030 or 2040 with more energy supplied from solar, wind and carbon capture while storage solutions are developed, Total SA CEO Patrick Pouyanne said Aug. 31. In a video presentation for the ONS Digital Conference, Pouyanne said oil won't disappear because it's still the most efficient source of energy, it's easy to transport and it's relatively inexpensive, noting that a liter of crude oil costs less than than a liter of water.

Listen: The Election Stakes For US Natural Gas Pipeline Permitting

The November presidential election adds to risks for natural gas pipelines, which link production to demand centers but increasingly face opposition from those seeking to phase out fossil fuels. For interstate gas pipelines, the federal government remains an important gatekeeper for permitting. If Democratic nominee Joe Biden is elected president, a change in leadership at the Federal Energy Regulatory Commission raises questions about whether federal approvals would still be as predictable. In a recent boom cycle, gas pipeline capacity approved by FERC quadrupled between 2013 and 2017 to reach 30.7 Bcf/d before coming off that peak. Rob Rains, senior energy analyst with Washington Analysis, joined us to share whether he thinks federal approvals of gas projects will continue apace in the next presidential term.