The actions of many major European energy companies are in stark contrast to the partisan fight over how to address anthropogenic climate change that continues to rage in the U.S. Alongside EU policy that is significantly supporting the growth of renewables in Europe, Total, Eni, Equinor, BP, Shell, and others have publicly committed to converting sizable amounts of their business to renewable energy sources in pursuit of being carbon-neutral by 2050.

This year’s challenging conditions for oil majors—the supply shock that followed the spring breakdown in OPEC+ negotiations and the hit to demand from COVID-related lockdowns—have forced many oil majors to re-evaluate their approach and commitment to the energy transition from fossil fuels. Those firms that have been more aggressive in pursuing renewables have tended to outperform market expectations during the downturn, according to S&P Global Market Intelligence.

This year will be the first on record during which global investment in renewables outstripped investment in oil and gas, according to the International Renewable Energy Agency. S&P Global Platts Analytics sees global oil demand peaking in 2040 at around 120 million barrels of per day before slipping to 116.5 million barrels per day in 2050 under its "most likely" to occur scenario.

“While COVID-19 will not abruptly usher in a new world order, it has forced oil and gas companies to reassess future investments and price assumptions, accepting that weaker demand is likely to keep oil prices lower over the long term,” the S&P Global Energy Transition Lab said in a recent report. “Because of this, combined with mounting ESG concerns, oil majors could reduce investments in traditional oil projects in favor of clean energy investments, in 2020 and beyond.”

However, many investors remain concerned that oil majors won’t be able to maintain or exceed their historical returns with renewable sources of energy. In mid-September, after BP executives shared plans to sell off certain assets and increase their green power contribution to 10%, the company’s stock hit a 25-year-low, with analysts expressing skepticism about the energy giant’s vision.

Some energy market analysts believe that oil majors will play a minor role in financing the future of carbon-free power. "Remember just how big this market is and how much space there is for everybody in it. There's trillions [of dollars] in it, and it won't be a BP that moves the market,” Alex Brierley, the co-head of Octopus Renewables, who manages the investment firm’s private funds, told S&P Global Market Intelligence.

Not all oil majors have committed to renewables. International Energy Agency Executive Director Fatih Birol, speaking at FT Commodities Global Summit last month, declared himself optimistic about the energy transition in pursuit of the Paris Climate targets—but cautioned that only 10% of current global oil production is covered by companies committed to a carbon-neutral future.

"There is a huge amount of oil and gas companies which are not yet publicly committing themselves to CO2 emission reductions,” Mr. Birol said.

U.S.-based ExxonMobil has publicly committed to remaining focused on their core oil and gas business. "Our fundamental belief is that if we were to invest in solar or wind, for example, we don't have [a background for] that type of business, so we would have to joint venture or acquire a company to do so," Carla Lacerda, ExxonMobil's head in Brazil, told the same summit.

"The era of global oil demand growth will come to an end in the next decade … But without a large shift in government policies, there is no sign of a rapid decline," Mr. Birol said in the IEA’s annual World Energy Outlook. "Only faster structural changes to the way we produce and consume energy can break the emissions trend for good. Governments have the capacity and the responsibility to take decisive actions to accelerate clean energy transitions and put the world on a path to reaching our climate goals."

Today is Tuesday, October 13, 2020, and here is today’s essential intelligence. 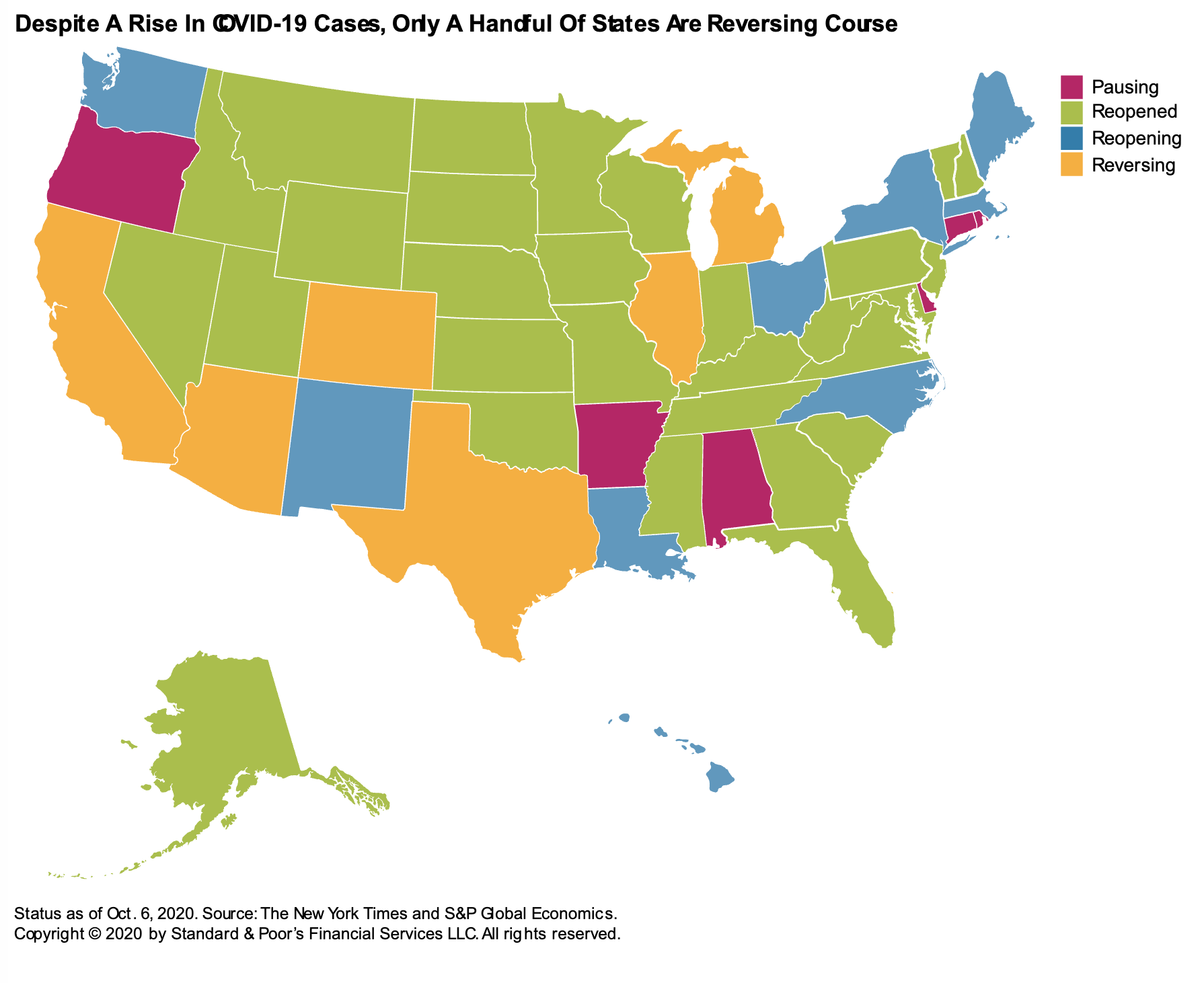 As more states reopen, the number of COVID-19 cases per million population has started to rise again in the U.S., and real-time data is indicating a slowdown in the economy's recovery. Pressure on people-facing businesses and industries remains unprecedented--a result of government restrictions on capacity, expiring government stimulus hurting pocketbooks, and a curbing of customers' demand based on fears of venturing out.

China's Golden Week holidays failed to deliver a much-anticipated boost for Macao's gaming industry as mainland tourist arrivals plummeted 84% year over year, deepening losses for casino operators that have been battered by the COVID-19 pandemic. It is estimated that gaming revenue during the eight-day holiday that began Oct. 1 fell 76% year over year with a daily average of 279 million Macanese patacas, according to projections by investment banks including Jefferies and China International Capital Corp., and Macao-based gaming consultancy IGamiX.

S&P Global Ratings believes planned corporate tax reform by France could improve French regions' budgetary performance by curtailing the volatility of tax revenue. The proposed reform was outlined on July 30 and confirmed in the central government's draft finance bill for 2021, presented on Sept. 28 to the French council of ministers. 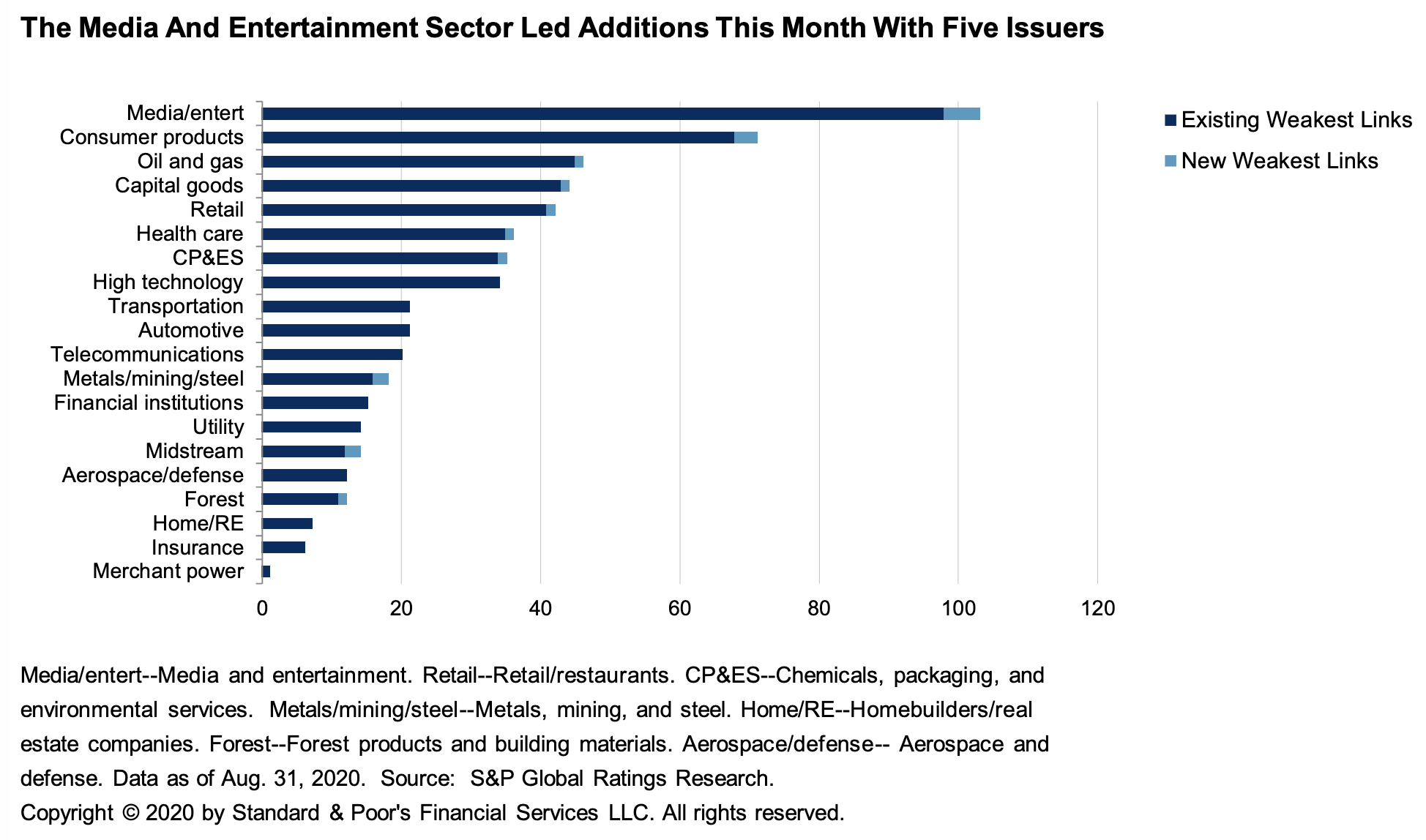 The number of global weakest links decreased to 572 as of August 31st from 589 since S&P Global Ratings’ last report. The weakest link tally is still elevated and nearly double its precrisis levels, though it does reflect some broad improvement among issuers most at risk for default over the past three months.

Residential REITs: Why Renters Are Flocking To Suburban Markets

Effects from the coronavirus pandemic, including increased remote working and employee mobility, and deteriorating fiscal health at both the state and city levels, threaten to reshape where renters decide to live. Densely populated urban gateway cities such as New York, San Francisco, Boston, and Los Angeles are most at risk, in S&P Global Ratings’ opinion, while suburban areas and Sun Belt markets could benefit. 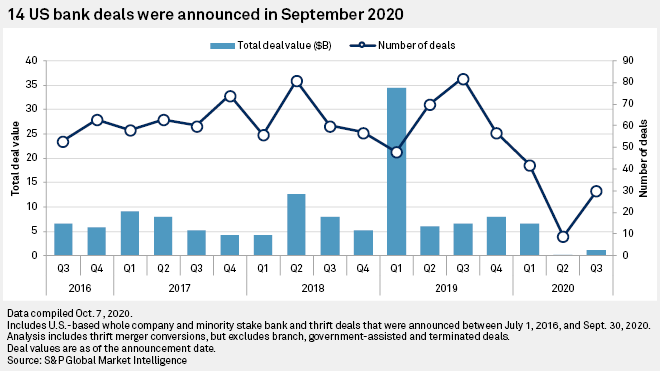 U.S. banks and thrifts announced 14 deals in September, the highest monthly tally in 2020 after January. During the first three quarters of this year, the industry saw 81 deal announcements worth an aggregate $7.75 billion, compared to 200 deals worth $47.05 billion over the same period in 2019. The median deal value to tangible common equity ratio for deals announced in 2020 was 134.2%, down from 157.7% in all of 2019.

As Indonesia's nonbank financial institutions, publicly listed companies and smaller commercial banks prepare to file their first mandatory sustainability reports next year, the industry is urging the regulator to provide more guidance and incentives. The nation's largest commercial banks with a core capital of at least 5 trillion rupiah and foreign lenders have submitted their first environmental, social and governance reports to the Otoritas Jasa Keuangan, or Financial Services Authority, for 2019 in the first phase of the new policy. 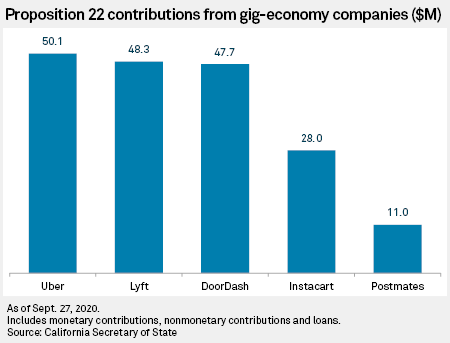 Uber Technologies Inc. and Lyft Inc. will incur higher costs and risk missing their targets to turn profits in 2021 regardless of whether they win their fight against California's law to reclassify drivers as employees, according to experts. Uber and Lyft, along with delivery companies DoorDash Inc., Postmates Inc. and Instacart, have pumped a combined $185.1 million into a California ballot measure that would overturn the new law. 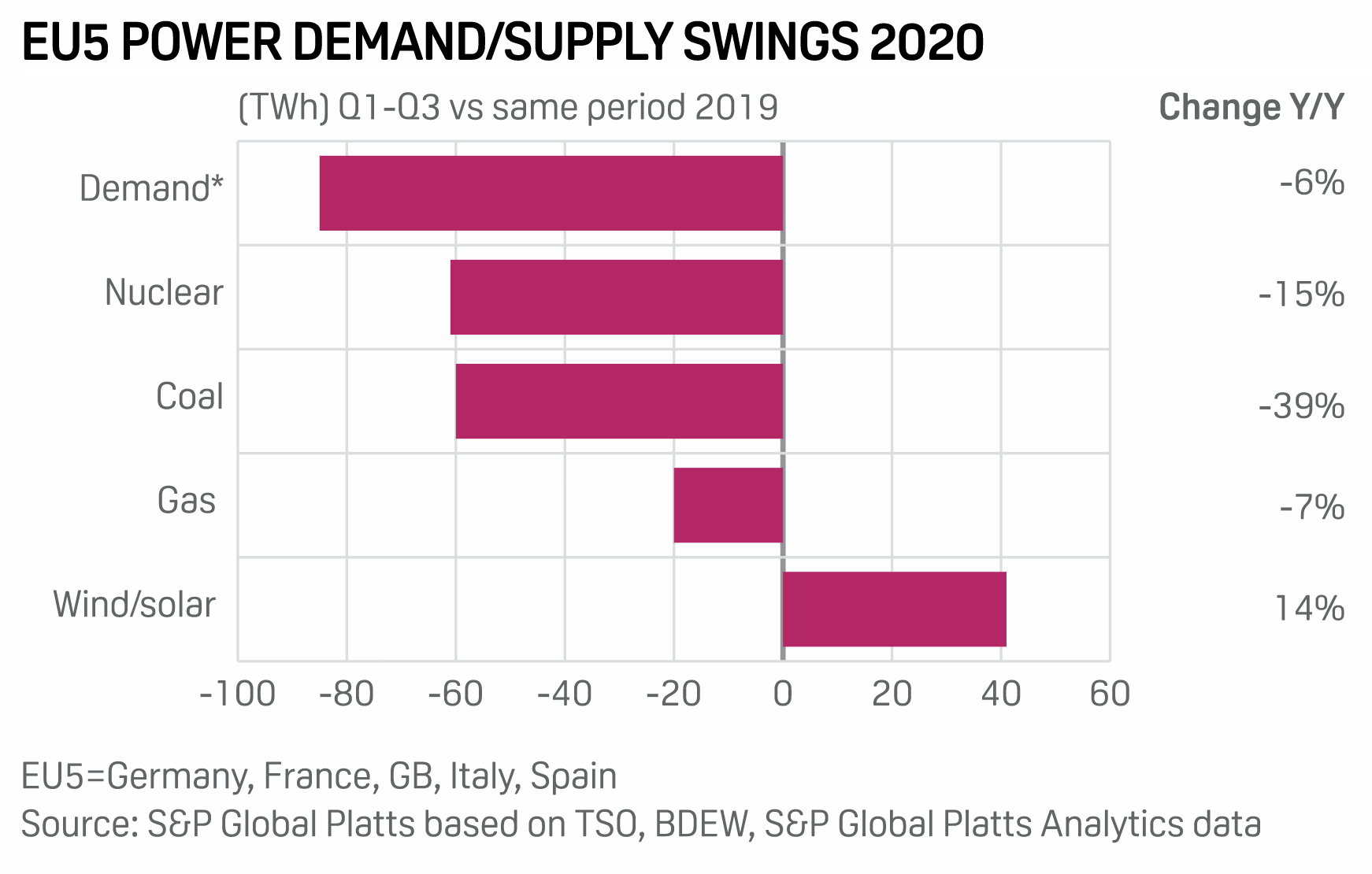 Germany's power sector emitted 36 million mt less CO2 in the first three quarters of 2020, down 22% on year, energy industry association BDEW said Oct. 12 based on its estimates. Coal falling to record lows already caused an "unparalleled" drop in CO2 emissions in 2019, down 17% on year to 284 million mt with the sector already meeting the 40% cut over 1990 climate target. Based on normal seasonal trends, power sector emissions will end 2020 with a 47% cut over 1990, the BDEW estimates with coal's share in the power mix falling to 21% in January-September.

U.S. President Donald Trump signed a proclamation Oct. 10 revoking a loophole that has allowed the import of "bifacial" solar panels, and has moved to set tariffs at 18%, up from the 2021, fourth-year 15% level the original tariff action called for. The move drew a sharp rebuke from the president and CEO of the Solar Energy Industries Association, Abigail Ross Hopper, who said the Office of the U.S. Trade Representative was "unnecessarily squeezing the supply of panels in the U.S., thereby inflating prices for consumers."

European oil majors are pushing more aggressively into the renewable energy market, but one of the continent's largest asset managers active in wind and solar says the relationship between Big Oil and institutional investors can be complementary, rather than confrontational, when it comes to green power. "We're not seeing them as a threat or significant competitor at the moment, despite all the noises they've made," Matt Setchell, co-head of Octopus Renewables and the investment manager for London-listed Octopus Renewables Infrastructure Trust PLC, said in an interview. —Watch and share this video from S&P Global Platts

Although Hurricane Delta has already led to a near total loss of U.S. offshore natural gas production, demand also looks to be doused by the storm, more than offsetting the loss of supply, pushing storage volumes in the Gulf region to near capacity while weighing on a floundering Henry Hub. With the U.S. Gulf Coast still recovering from the effects of Hurricanes Laura and Sally, Delta now threatens the U.S. Gulf Coast.

Three days after Hurricane Delta raged through the U.S. Gulf of Mexico, nearly 70% of the region's crude production still remains offline, a federal agency said Oct. 12, although producers increased the number of crews on platforms and restored more volumes of downed oil and gas output in the previous 24 hours. The 70% represented a big drop from the 91% shut-in output Oct. 11, the U.S. Bureau of Safety and Environmental Enforcement said in its daily storm bulletin.

For the global oil market, one of the biggest wildcards of the US presidential election is Iran sanctions relief under a Biden administration. This would return more than 2 million b/d to an already very oversupplied oil market. Nareeka Ahir, geopolitical analyst for S&P Global Platts Analytics, argues that Biden will want to strike a quick interim deal with Tehran. In the second interview, Henry Rome, senior Iran analyst at the Eurasia Group, predicts an interim agreement between the Biden administration and Iran could bring no more than 700,000 b/d next year, with a broader deal not coming until late 2021 or 2022.