Although scientists and public health experts still know little about the Omicron coronavirus strain discovered last week in South Africa and classified by the World Health Organization as a “variant of concern,” investors and market participants have reacted to the potential threat.

South African scientists announced the discovery of the latest coronavirus variant in the country’s Gauteng province on Nov. 25. Omicron, which contains 50 mutations not previously seen in combination, could be more contagious than other variants—although the illness it causes could be less severe. Global leaders have said that it could take weeks to develop a full profile on the variant. Pfizer-BioNTech and Moderna have already announced that they will recalibrate their COVID-19 vaccines to address Omicron.

Markets reacted to the discovery, with the S&P 500 and Dow Jones Industrials Average plummeting on Nov. 26. Friday’s sell-off piled more pressure on the European high-yield pipeline, which bankers estimate holds roughly €10 billion in underwritten deals going into 2022, according to S&P Global Market Intelligence.

“Black Friday was supposed to be about shopping; at least there was a sale: the S&P 500 had its worst day in nine months, retreating 2.3% to move into the red month-to-date. Meanwhile, VIX saw its fourth-largest single-day percentage increase ever, rocketing up to close above 28 from a sub-19 reading the day before,” Benedek Vörös, director of index investment strategy at S&P Dow Jones Indices, said in a Nov. 29 market note. “The elephant in the room has stamped its foot. New genetic variants of COVID-19 are practically guaranteed by its global endemic status; this is precisely why longer-dated volatility expectations have remained persistently elevated even as the global economy tentatively unlocked. Last week’s identification of the new ‘Omicron’ strain—during a traditional U.S. Thanksgiving lull in liquidity—roiled global markets.”

Now, “it looks as if the return of Stateside traders to their desks will accompany a slight recovery of some of Friday’s losses, with S&P 500 futures indicating a roughly 1% gain at the open” this morning, Mr. Vörös said.

"Given the lack of information on the latest variant, one could probably question the scale of Friday's selloff and whether it is really justified," ING analysts Warren Patterson and Wenyu Yao said in a note, according to S&P Global Platts. "The market seems to be coming to that realization in early morning trading today, with a relief rally underway. Initial reports suggest that symptoms from the Omicron variant are mild, but there are still question marks around how effective current vaccines will be against this latest variant.”

The U.K. quickly called for restrictions on travelers visiting from South Africa and several other African nations. The next day, the EU ordered a travel ban on seven countries in the region, followed by similar actions from Canada and the U.S. Some market observers have questioned whether putting restrictions on movement from South Africa and other African economies wrongly punishes such countries with lower COVID-19 infection rates and less equitable vaccine access for sharing critical information with the world.

Global restrictions on movement could derail the mobility and oil recovery seen across Asian markets like India and South Korea.  An OPEC+ committee on Dec. 2 could incorporate concerns over Omicron into the group’s market actions for demand growth and a possible oil surplus, although Russia has insisted that the group not make hasty decisions over the new variant, according to S&P Global Platts.

"I'm not sure they are going to react with an about turn quite as quickly as this unless more information [about the new variant] comes to light … Will they err on the side of caution also? I think they might and that seems to be the consensus out there. They seem a lot more concerned about demand concerns, about economic shocks, about question marks about economic growth in China and about stats from India,” Mike Muller, the head of the energy and commodities trader Vitol Asia, said during a Nov. 28 Gulf Intelligence webinar, according to S&P Global Platts. "I think in a world without Omicron, we were looking at an ever-tightening supply picture where the world needed OPEC to put extra volume into the market … If they don't and this turns out to be a false alarm, a false scare … and this virus doesn't turn out to be of concern to energy demand, then the market needs ongoing supply."

Today is Monday, November 29, 2021, and here is today’s essential intelligence. 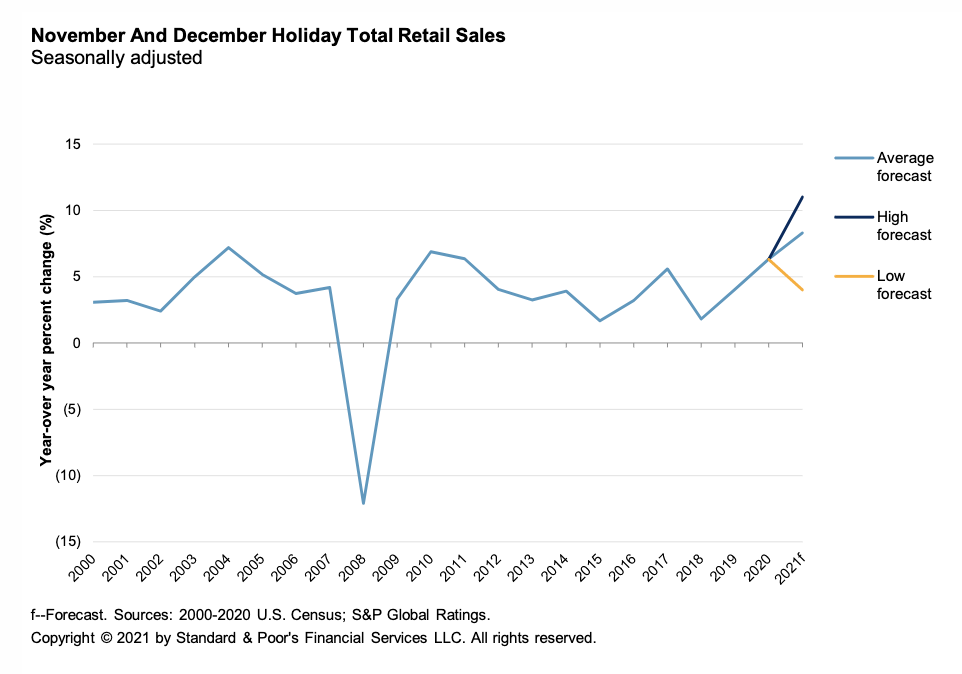 S&P Global Ratings analysts in the retail, restaurant, and consumer goods sectors collectively forecast an 8.5% increase in retail sales during the November and December 2021 holiday season. An elevated consumer saving rate continues to support spending across categories, underpinned by consumers' desire to make the most of in-person celebrations this year.

Customer Success represents an emerging segment within the broader Customer Experience & Commerce market with the potential to benefit from the increasing focus on retaining existing customers and driving annual reoccurring revenue. This report leverages 451 Research’s deep knowledge of and relationships within the Customer Success market, resulting in a proprietary forecast based on a bottom-up analysis of current revenue and growth expectations by participating vendors through 2025.

Dubai International Airport will return to full operational capacity in the coming weeks as the world's busiest hub for international travel in 2019 reopens a purpose-built facility for Airbus A380 due to rising demand, its operator said Nov. 24.

Default, Transition, and Recovery: The S&P/LSTA Leveraged Loan Index Default Rate Is Expected To Remain Near 1% In September 2022 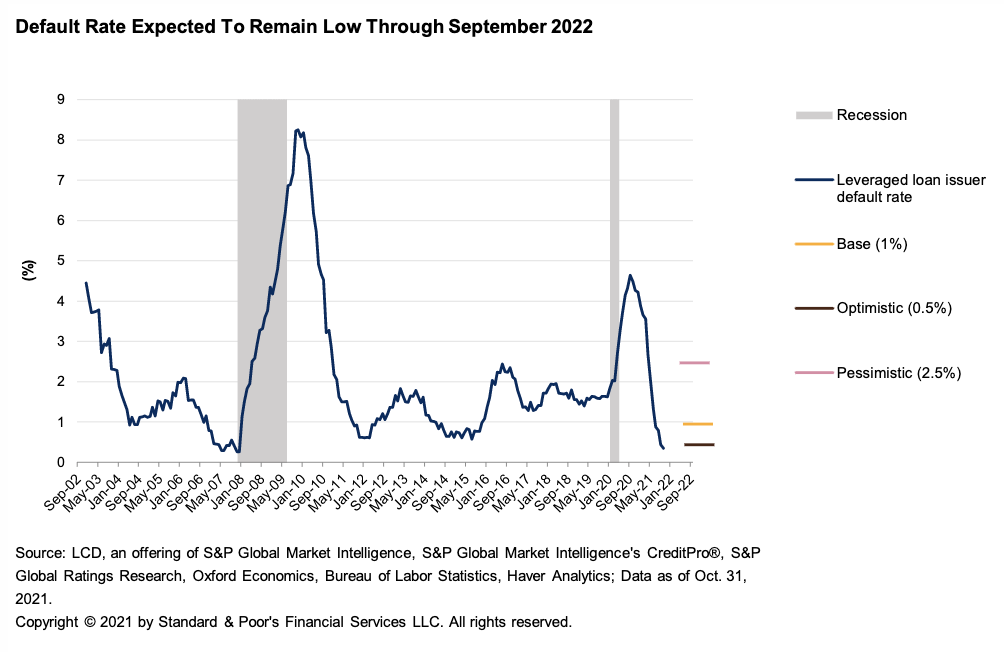 S&P Global Ratings Research expects the S&P/LSTA Leveraged Loan Index trailing-12-month default rate (by number of issuers) to remain near previous cycle lows and reach 1% in September 2022. The default rate fell to 0.4% in October, just slightly above the all-time low for the index. 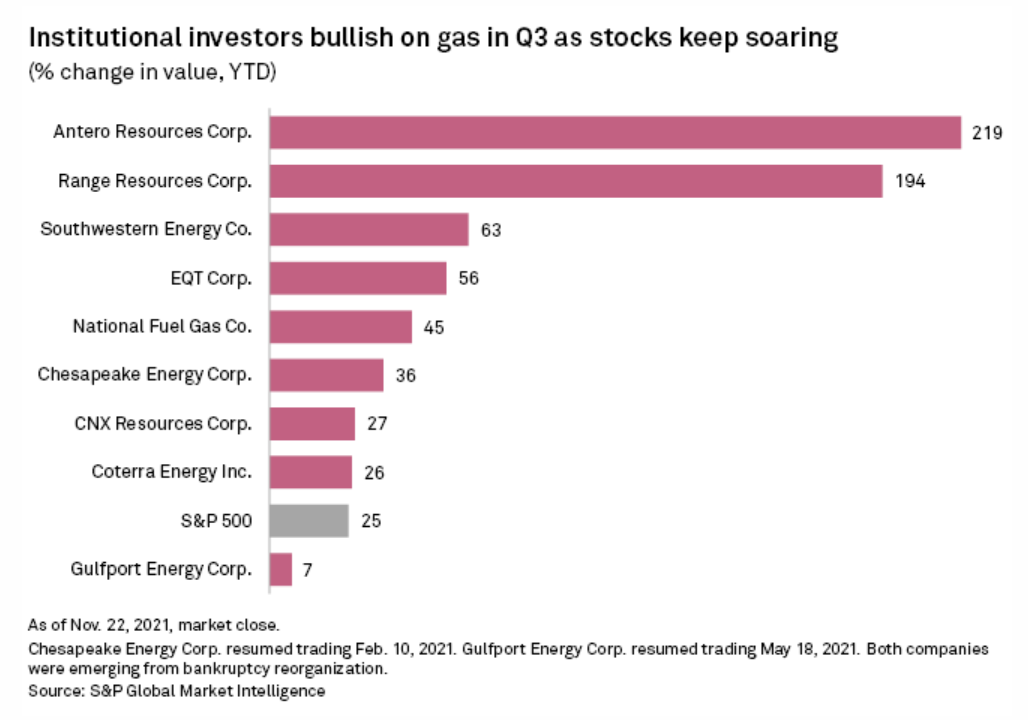 The rapid depreciation of the Turkish lira in recent days is a "catastrophe" for the country's polymer markets, with market sources expecting spot trade to be severely limited into the key import hub at least until the end of year. The value of the lira against the dollar has plunged by as much as 20% so far in November and fell by some 15% on Nov. 23 alone. 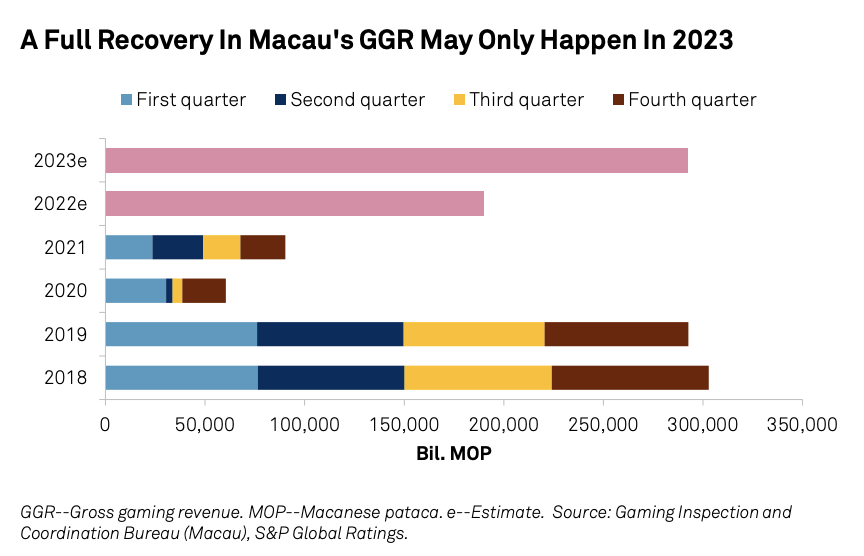 The biggest near-term threat for rated Macau casino operators is a slow recovery in gross gaming revenue because of COVID-19-related travel restrictions. Regulatory risk is rising, but the immediate credit impact is limited for now.

After 151 rounds and $21.9 billion in total proceeds, the Federal Communications Commission's auction of 100 MHz of contiguous spectrum in the 3.45 GHz band concluded its clock phase earlier this month. Mid-band spectrum is a critical component of 5G networks and allows for better speed and coverage than high-band and low-band spectrum. 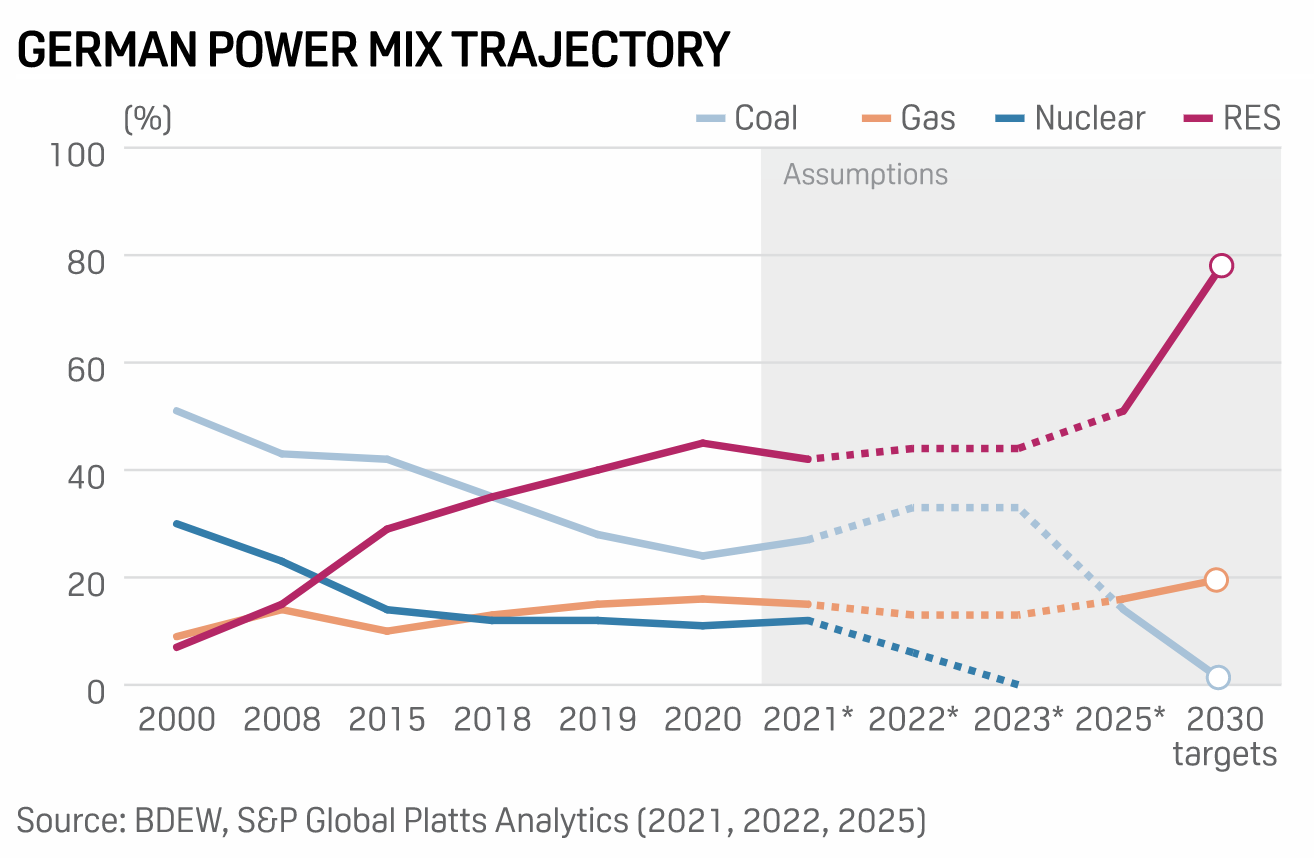 Germany's new coalition of SPD, Greens, and liberal FDP agreed Nov. 24 a coalition treaty that brings forward the country's coal phase-out date from 2038 to 2030. The parties also plan to lift Germany's renewables target for 2030 from 65% to 80% of electricity demand with a massive expansion of wind and solar.

With the UN Climate Change Conference now settling into the rearview mirror, stakeholders questioned Nov. 23 how carbon dioxide removal can be done with climate justice concerns in mind. "The decisions that were made at COP do provide momentum to CDR," said Hunter Cutting, communications director of Climate Nexus, during a panel discussion.

Various clean energy groups want the U.S. to put an entity in charge of procuring necessary electricity resources, creating "buyers with accountability," among other recommendations aimed at ensuring resource adequacy as the U.S. transitions to cleaner energy sources, according to a Nov. 23 report.

A.P. Moller-Maersk, the world's largest shipping company, is looking into the potential use of hydrogen as fuel for some vessels and is also in talks with some green methanol producers to secure supplies as it seeks to decarbonize its fleet, a company official said Nov. 24.

Marine fuel supplier Monjasa is giving customers an emissions report on their purchases in a project with Deloitte to facilitate transparency through the bunker supply chain, the company's Group Responsibility Director told S&P Global Platts. "Prior to our CO2 emissions reporting model, we realized was that obtaining upstream data was surprisingly difficult," Jesper Nielsen told S&P Global Platts.

Listen: Freight And Drought Bite As The Californian Japonica Rice Market Heads Into 2022

The price of the global Japonica market's benchmark, U.S. #1, 4% broken white rice, is reaching highs not seen in ten years at quite an unfortunate time. Freight from California remains incredibly difficult to source, especially at an affordable rate for buyers. Meanwhile, other Japonica origins, such as Australia and China continue to steadily chip away at market share amid pressure to export their increasingly robust stockpiles.

A group of industrial manufacturers wrote U.S. Energy Secretary Jennifer Granholm Nov. 22 to offer 12 reasons why it believes a "consumer safety valve" is needed before more LNG exports flow to non-free trade agreement countries. The letter continues ongoing pressure from the Industrial Energy Consumers of America, which seeks to limit the scale of LNG exports.

TC Energy is seeking $15 billion in damages from the U.S. government for the cancellation of the Keystone XL pipeline project, having filed a formal request for arbitration under the North American Free Trade Agreement. The filing late Nov. 22, which had been expected, shows TC Energy is moving forward in its bid to recoup costs after President Joe Biden yanked the federal permitting for the project on his first day in office in January.

U.S. utility transmission and distribution costs have been rising faster than electricity production costs over the past decade, with utility spending on power delivery 65% higher in 2020 than in 2010, a trend that could continue as utilities invest in grid modernization.

The circumvention of Ukrainian natural gas transport for Russian exports to Europe is "the only goal" of the recently completed Nord Stream 2 dual-pipeline system, CEO of Naftogaz Ukrainiy Yuriy Vitrenko told delegates at the S&P Global Platts European gas and LNG conference Nov. 24.