SPACs are dominating U.S. markets this year. In the third quarter alone, entities classified as blank-check companies accounted for 56.3% of initial public offerings (IPOs) in U.S. markets, up 26% from the same period a year earlier, according to S&P Global Market Intelligence. From January- November, S&P Global Market Intelligence data showed 76 SPACs raised $56.9 billion in aggregate gross proceeds on U.S. exchanges, an increase from the 52 that went public in all of 2019, to raise a cumulative $13.31 billion.

Since the start of this year, 188 SPACs worldwide had IPOs, totaling $66.8 billion in gross proceeds, according to data and analysis firm SPACInsider.

The surge of SPACs as Wall Street’s favored capital source is linked to the active market conditions during the pandemic, according to Jeremy Swan, the national director of the professional services firm CohnReznick LLP's financial sponsors and financial services industry practice. In a Nov. 19 interview with S&P Global Market Intelligence, he said that blank-check companies’ have a propensity to thrive in heated public markets with strong valuations and that “as soon as that starts to fall away, the attractiveness of SPACs will also fall away.”

However, markets have yet to cool—reinforcing expectations that the craze for the shell companies will continue as this unprecedented year nears its end. The S&P 500 index has gained 10% this year, according to S&P Dow Jones Indices, and the CBOE Volatility Index, nicknamed Wall Street’s fear gauge, fell to its lowest level this week since Aug. 25, to 22.7 on Nov. 17.

"With the melt-up just starting, we expect the U.S. and other markets to reach record highs over the coming weeks and months, as investors can finally look ahead into next year and beyond with more certainty than they have had for months," Christopher Rossbach, who manages the J. Stern & Co. World Stars Global Equity Fund, wrote in a recent market outlook.

Because coronavirus containment measures have eliminated in-person meetings, putting together the series of presentations needed for an IPO has become difficult. Some market participants see SPACs serving as a solution to that particular problem.

“From a SPAC perspective, the roadshow doesn't happen. The financial backers are there, they're launching the process, you have the typical institutional buyers, you have the opportunity for co-investment alongside, and it provides a faster time to market, maybe more certain valuation, and potentially greater liquidity in a shorter period of time,” Mr. Swan told S&P Global Market Intelligence.

Not all market participants have the same enthusiasm for the blank-check model. On Nov. 19, Tesla CEO Elon Musk tweeted in response to a Forbes article on the subject that “caution strongly advised with SPACs.” The day before, British electric vehicle startup Arrival announced its plans to go public on the Nasdaq through a SPAC formed with former Marvel Comics CEO Peter Cuneo.

Today is Friday, November 20, 2020, and here is today’s essential intelligence. 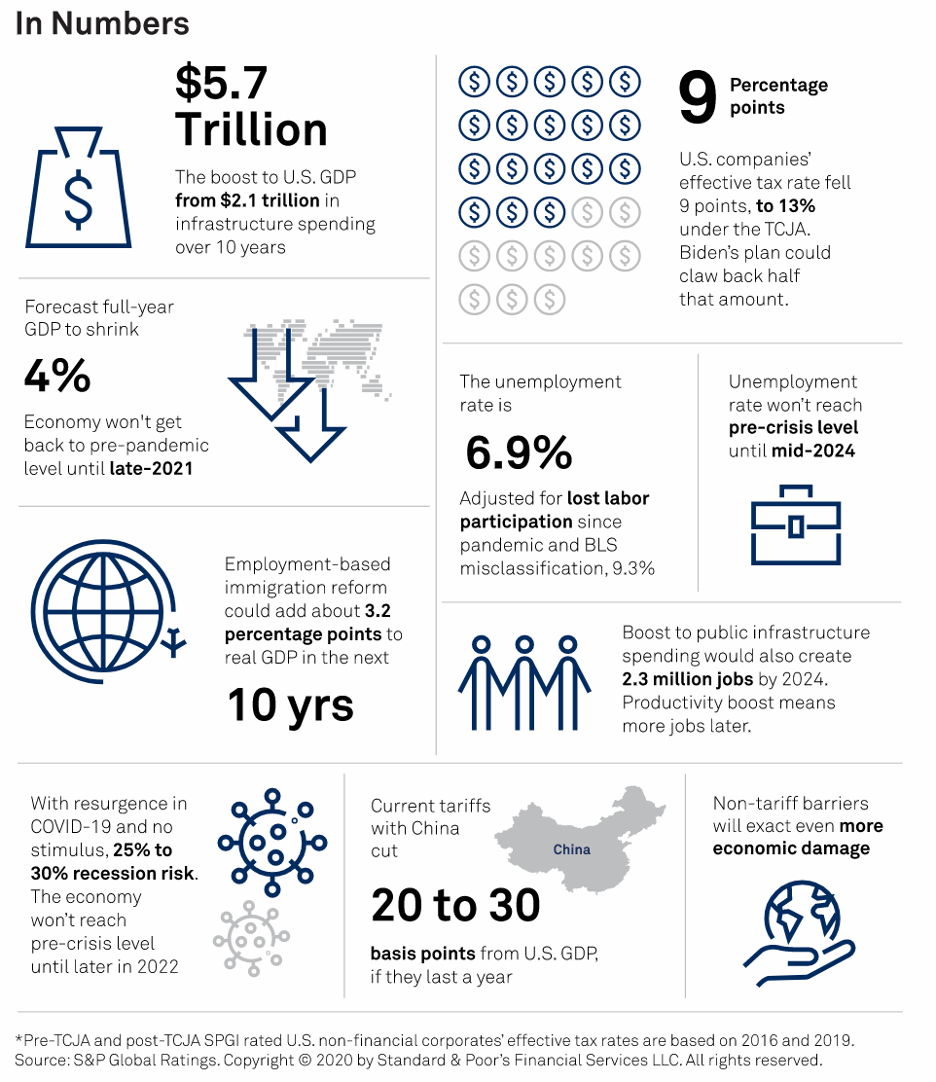 S&P Global Economics believes President-elect Biden, in his first year (and certainly his first 100 days), will focus on containing coronavirus and getting better treatment or a vaccine to American households. The next important task will be to help the industries struggling from lost economic activity and workers displaced by the virus—in particular, create jobs as an investment in the U.S.’s future.

As President Donald Trump tries in his final days in the White House to push through his drug pricing proposals and Democrats gear up for a new fight on Capitol Hill to lower costs, manufacturers have a new bulwark to defend themselves: the goodwill they have built up in developing therapies and vaccines to combat the COVID-19 pandemic. 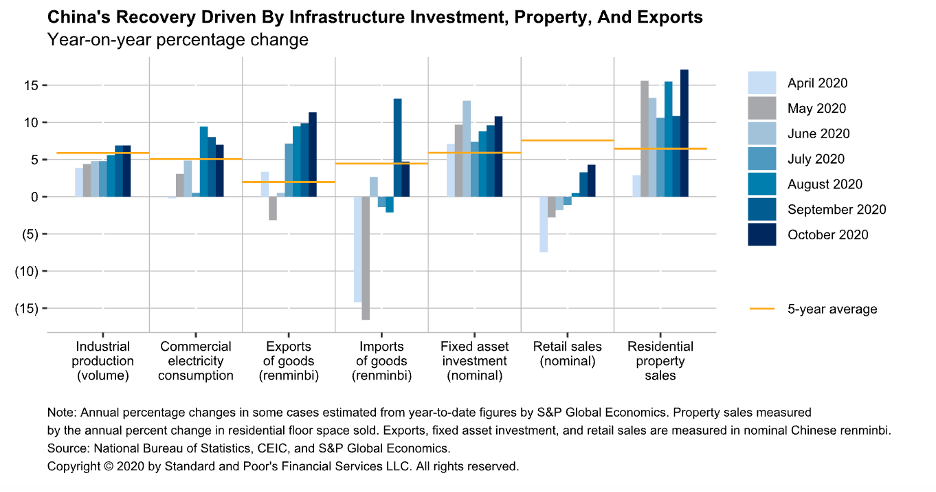 China's recovery trundles on and infrastructure investment, property, and exports remain in the driving seat. Consumers are still hesitant to spend.

The Path to Recovery for European Health Care: The Growing Role of Capital Allocation for Credit Quality

The European health care industry will continue to recover—but on an uneven path—as the sector grapples with a second wave of the pandemic, uncertainty about the extent of government support, and a likely prolonged rollout of COVID-19 vaccines.

As Biden Preps For Presidency, Senate Sway May Mean More For Credit

As President-elect Joe Biden prepares to take office in January, much of what he can accomplish depends heavily on the partisan makeup in Washington. Ultimate Senate control, to be set by two run-off elections in Georgia, could significantly influence the new administration’s policy agenda.

Driven by the borrowing of governments and businesses, global debt rose by $19.3 trillion — or 7.1% — in the first nine months of 2020 to a record high of $272 trillion, according to the Institute of International Finance Inc., or IIF. 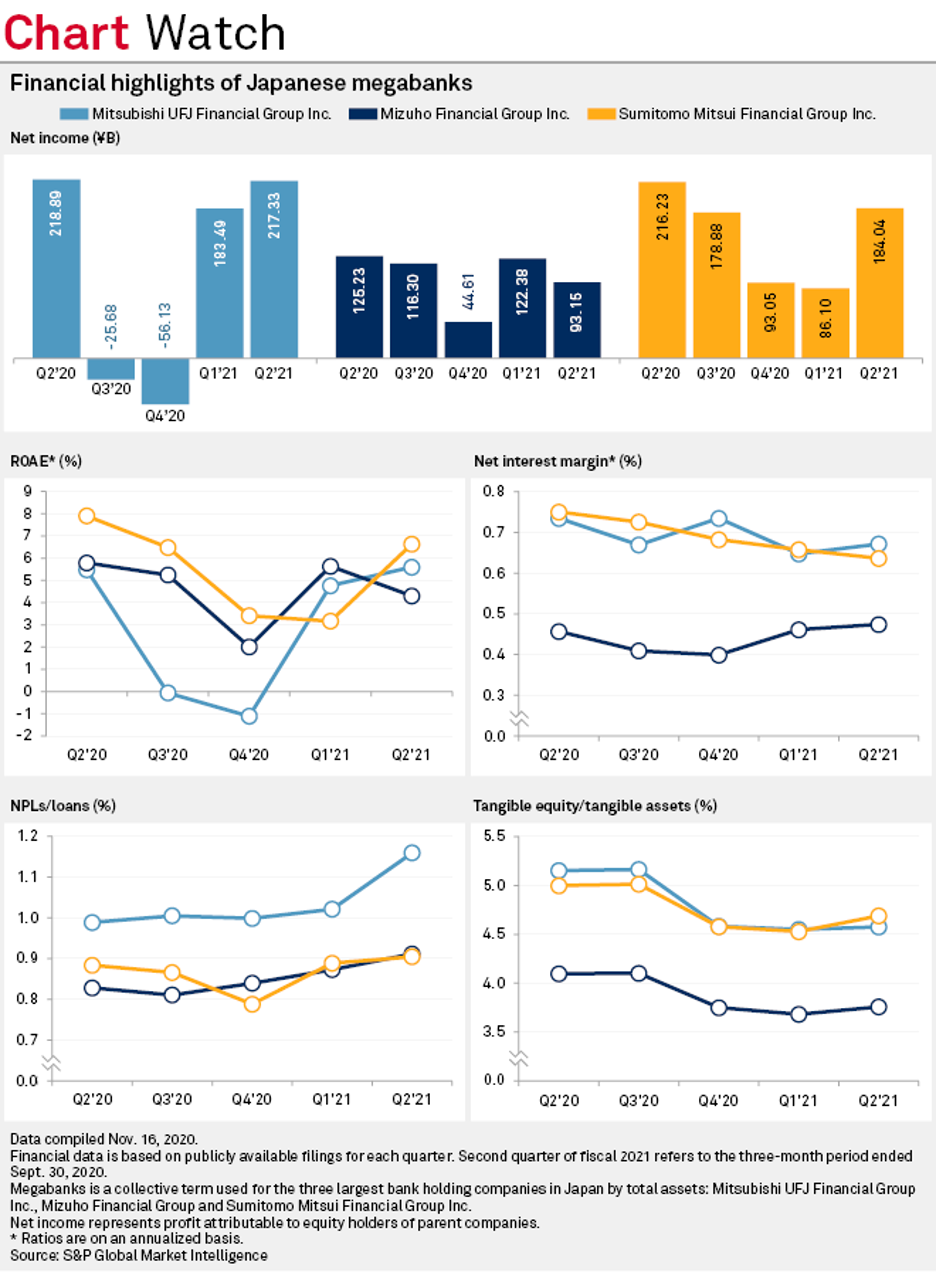 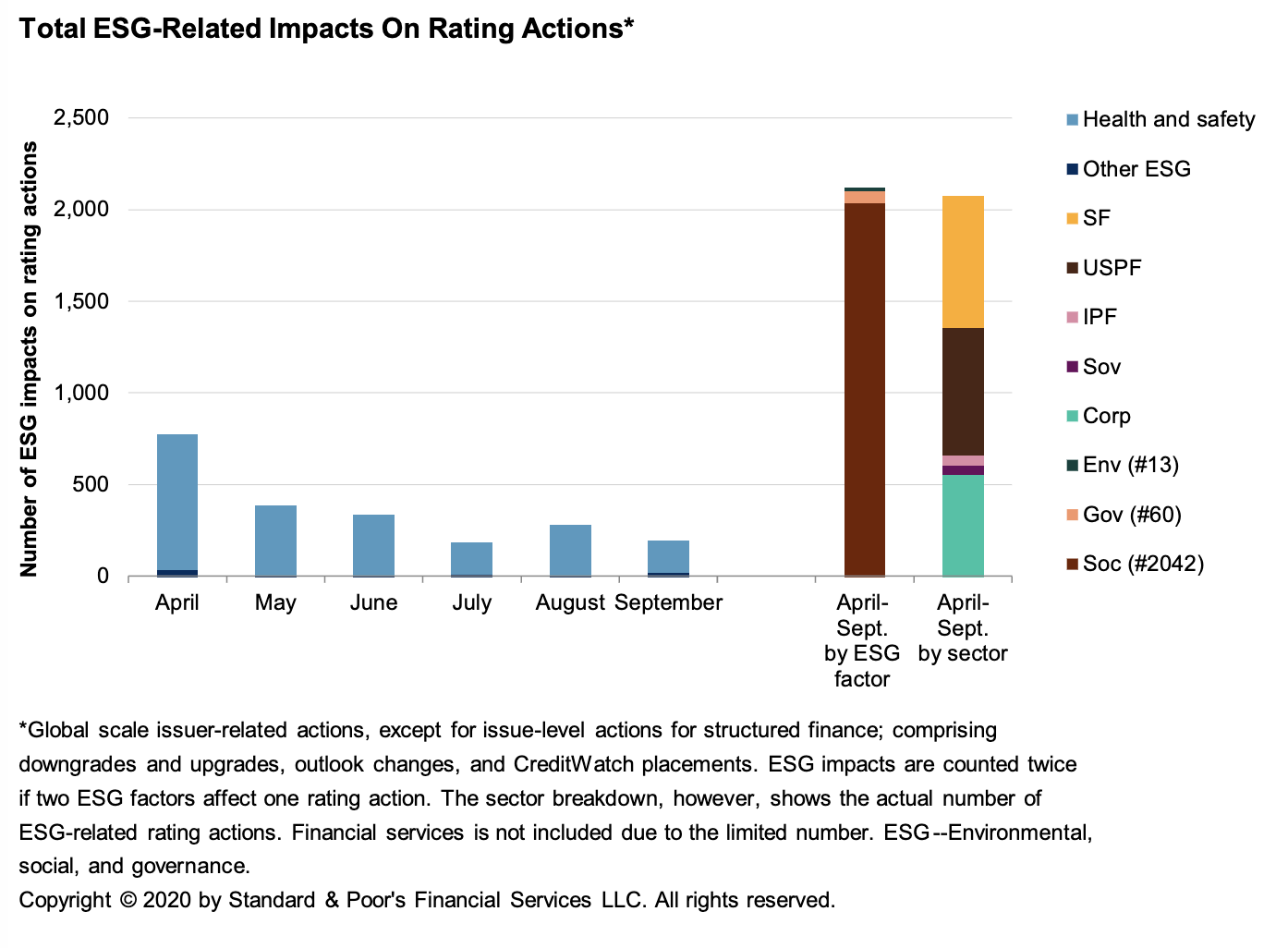 From April to September, S&P Global Ratings took close to 2,100 ESG-related rating, CreditWatch, and outlook actions. Of these, 775 were downgrades, the bulk (96%) of which stemmed from the COVID-19 pandemic, while governance concerns contributed to downgrades on 23 entities and environmental factors to six. 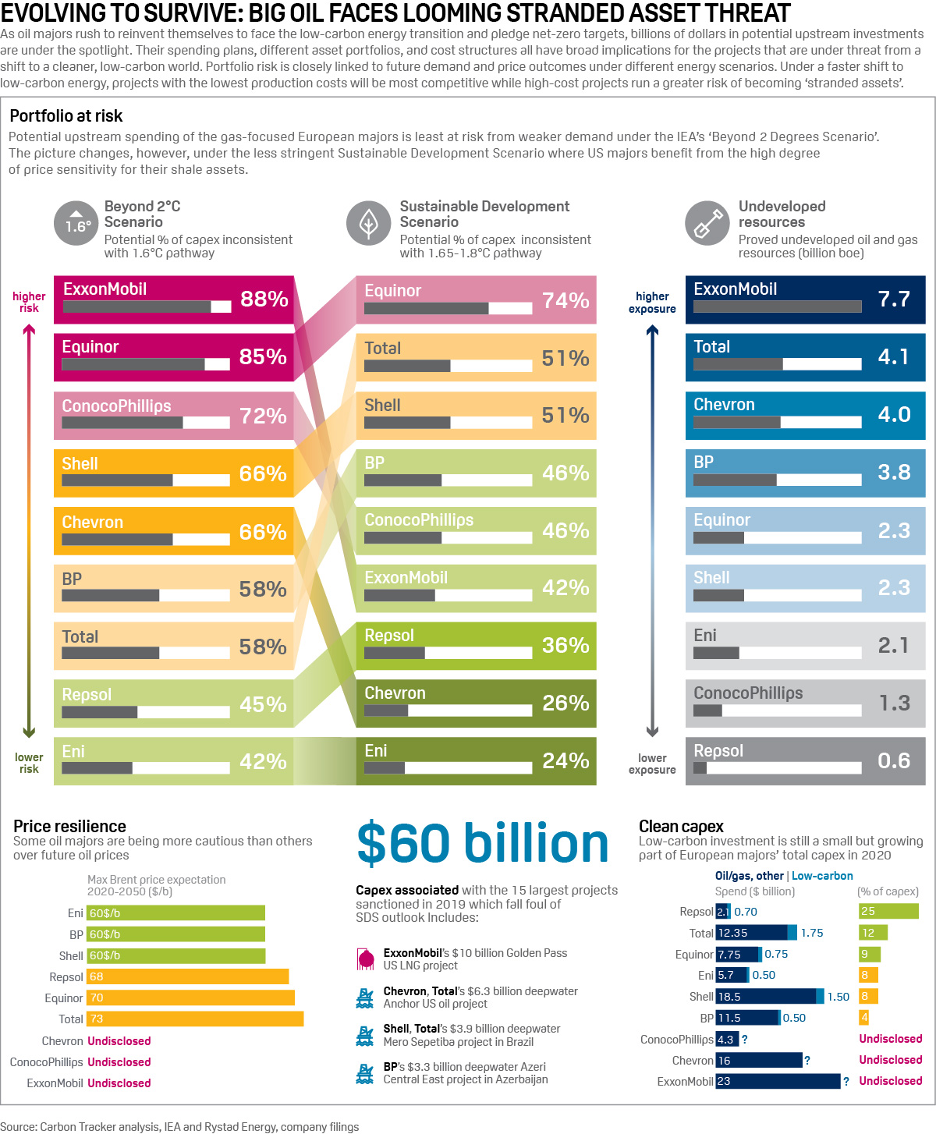 Global oil majors are being forced to reevaluate the resilience and cost of new oil and gas projects to accommodate weaker demand outlooks and lower long-term prices in the wake of the COVID-19 pandemic.

Listen: Aviation Looks to Vaccine for Boost In Demand

Jet fuel took center stage at the recent International Air Transport Association Fuel Forum, as the industry grapples with the demand destruction due to air travel restrictions, but also paves the way for a clear decarbonisation agenda.