The S&P Global Daily Update will be off in observance of Veterans Day in the U.S. on Thursday, November 11 and Friday, November 12. Subscribe to start every business day with our analyses of the most pressing developments affecting markets today, alongside a curated selection of our latest and most important insights on the global economy, after the break.

As the end of the year approaches, global economic growth is sputtering. But despite the coronavirus crisis’ continuing conditions, supply-chain constraints, and increasing inflation, the world’s largest economy is likely to regain its strength sooner than its counterparts.

Market participants foresee the U.S. economy experiencing a new dawn in 2022. U.S. GDP growth slowed from an annualized pace of 6.7% in the second quarter to 2% in the third quarter, falling short of the consensus 2.6% forecast. By the fourth quarter, S&P Global Ratings’ characterized its previous full-year 5.7% U.S. GDP forecast as “too high”—but maintained that 2021 still could still mark a 37-year high of economic growth for the country. Economists interviewed by S&P Global Market Intelligence believe that the U.S. may be spared the worst of the global economic slowdown, as COVID-19 concerns ebb, and supply chain and inflationary pressures stabilize in early 2022.

“While the U.S. economy has slowed dramatically from skyrocket readings only a few months ago, it's best to keep this in perspective,” S&P Global Ratings Chief U.S. Economist Beth Ann Bovino said in a recent report. “Why is the U.S. in this situation? Because the economic recovery is so strong. The problem is that businesses can't make products fast enough to meet demand. The U.S. is seeing slower (though still-healthy) economic activity as supply chain bottlenecks limit activity and raise prices, despite a huge desire to get to a post-pandemic normalcy.”

"Traders worried about stagflation should keep a close eye on the outlook for economic growth," Matthew Weller, global head of research at FOREX.com and City Index, told S&P Global Market Intelligence in an interview. "With many forecasters projecting solid growth in the 5% range for both the U.S. and world as a whole next year, it would take another massive unexpected economic dislocation to tilt the odds toward stagflation."

With the rate of U.S. corporate bankruptcies at a new low for this year, new infrastructure investment on the immediate horizon, and equities markets rallying full speed ahead, shortages of people and interest rate uncertainty appear to be at the center of the country’s short-term economic problems.

"We're expecting a pickup in [U.S.] economic activity now that delta [wave] is partially over," Dana Peterson, chief economist at the Conference Board, said in a Nov. 3 briefing, according to S&P Global Market Intelligence. "We anticipate no new major variant disruption."

Supply constraints in goods and services, including workers, have curtailed the U.S. economy’s growth and are a drag on business capacity, according to S&P Global Ratings. In response to the 5 million U.S. workers who have remained sidelined from the labor force or have entirely left the workforce as of September, companies have raised wages and offered other benefits to lure potential employees into positions. At the same time, many Americans older than age 55 have begun to return to work in lieu of early retirements, according to S&P Global Market Intelligence.

“It has been suggested that extended federal unemployment benefits offered during the pandemic have kept workers on the sidelines. Our analysis indicates this is not the case. States that ended the extended benefits earlier than the September deadline also largely reopened their economies sooner, so the reopening effect helped these states boost employment even before those benefits ended,” Dr. Bovino said in another report. “The reason workers aren't filling jobs today seems to stem more from the decision to drop out of the workforce entirely, indicating a structural shift rather than a temporary change.”

Today is Wednesday, November 10, 2021, and here is today’s essential intelligence.

U.S. Food Prices Soar With No End In Sight 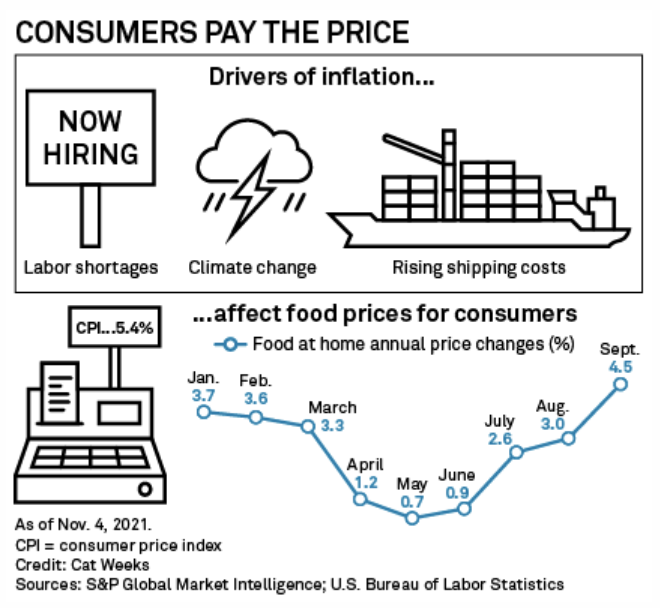 Food prices are soaring, and analysts do not foresee a peak until at least well into 2023. Climate change, skyrocketing transportation and energy costs, and widespread labor shortages are all contributing to the run-up in grocery bills. Food inflation also threatens the post-pandemic recovery by accelerating inflation and potentially upending how food is moved, bought, and sold in America.

Credit Trends: Risky Credits: The Percentage Of Issuers Rated 'CCC' And Below In Europe Is Above North America For The First Time 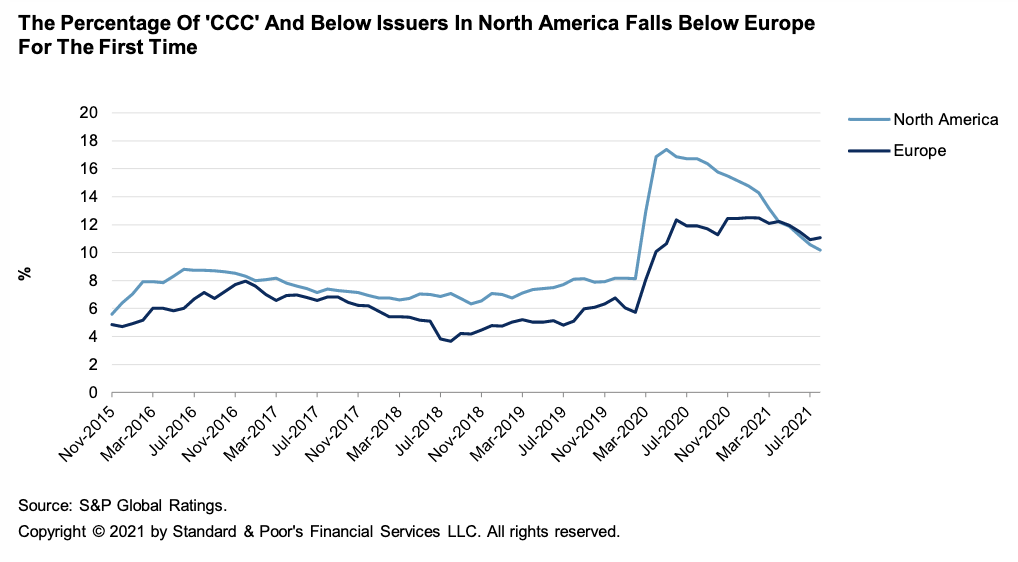 The recovery of 'CCC' rated issuers in Europe remained stagnant in the third quarter as the number of upgrades out of the 'CCC' rating category slowed compared to the second quarter. European 'CCC' and below debt outstanding topped US$100 billion equivalent for the first time in September with the downgrade of Ireland-based Endo International PLC to the 'CCC' rating category from 'B-'. 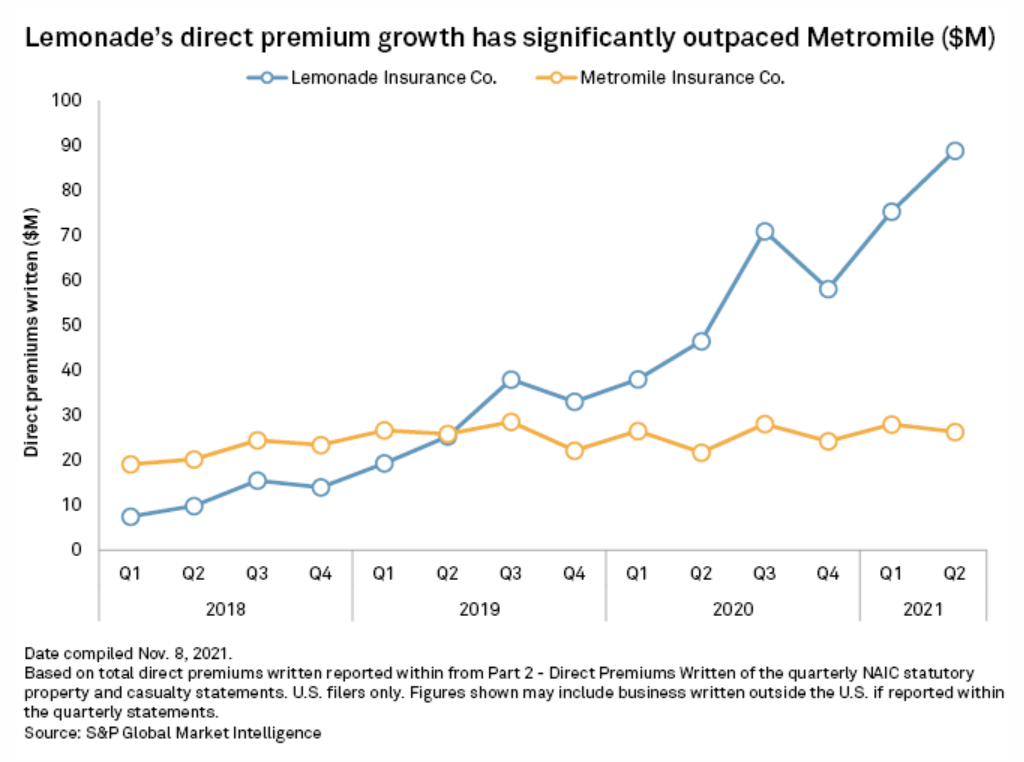 With the pending acquisition of Metromile Inc., Lemonade Inc. stands to gain $100 million of in-force auto premiums, 49 state licenses, and a team dedicated to digital car insurance. Lemonade executives view those qualities as fuel to help the company accelerate its expansion in the auto insurance space.

Australia's wheat export prices reached a record high Nov. 9 amid expectations of a bumper output for a second consecutive year and promising exports for the 2021-22 marketing year (October-September). S&P Global Platts had assessed the Australian Prime White wheat index at a record high $343.50/mt Nov. 9, up $2.50/mt from Nov. 8. 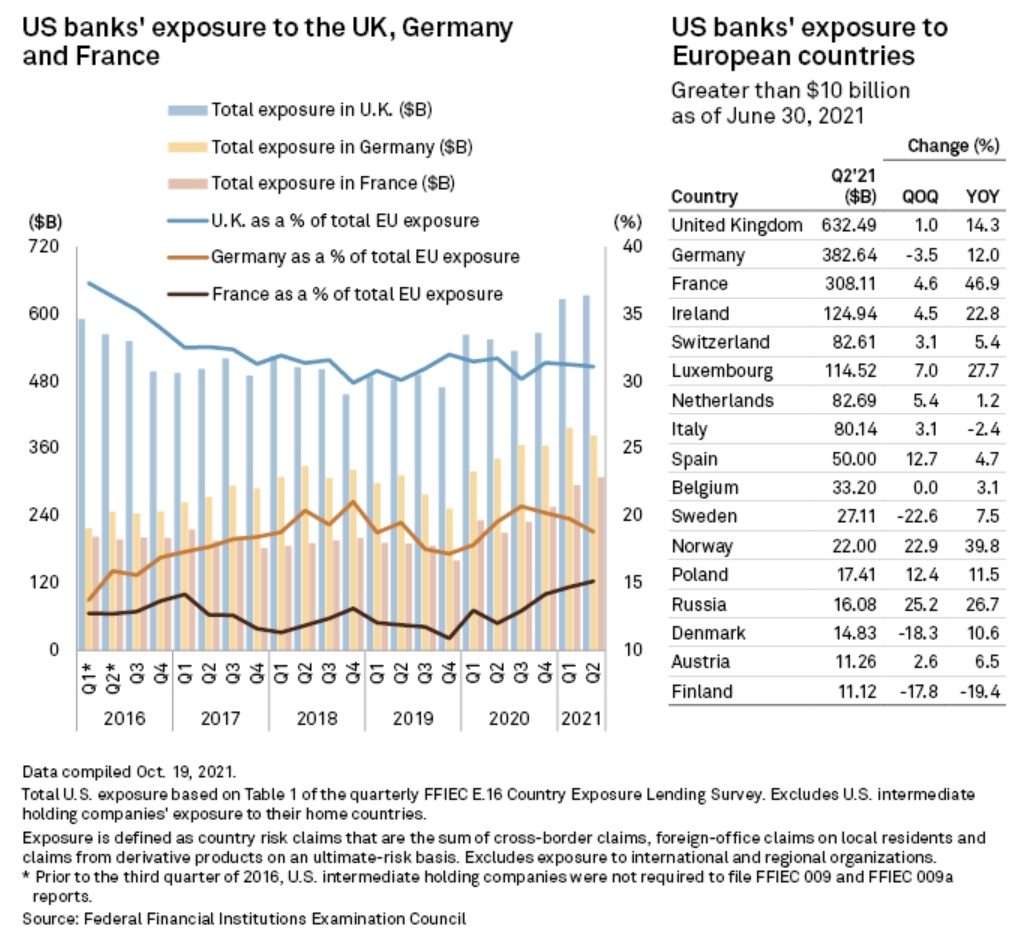 U.S. banks significantly increased their exposures to France in the year to June 30. The banks' direct cross-border claims, foreign office claims—local claims of the banks' offices abroad—and derivative claims on entities and individuals in France amounted to $308.1 billion at the end of June, up 47% from $209.8 billion a year before.

Listen: Beyond The Buzz - Natural Capital & Potential Incentives To Protect Nature - Live From COP26 In Glasgow

In this special episode, Mike Wilkins takes to the floor of COP26 in Glasgow with Andrew W. Mitchell, the Vice Chair of the Taskforce on Nature-related Financial Disclosures (TNFD) Stewardship Council, to discuss the issue of tackling global deforestation, a major issue in the fight against climate change.

For U.S. Public Power And Electric Cooperatives, There Are Hurdles On The Path To Decarbonization

Although the U.S. electric utility sector has reduced carbon emissions over the past decade, much work remains to be done. Preserving credit quality will require public power and electric cooperative utilities to maintain affordable rates and provide reliable service as they transition from carbon-based power resources.

A massive increase in 2030 climate action is still needed to limit global warming to below 2 degrees Celsius this century despite recent net-zero commitments from 25 countries, the UN's environment program said Nov. 9. Since the September cut-off point for the UN's Oct. 26 Emissions Gap Report 2021, new or updated unconditional Nationally Determined Contributions and other pledges resulted in a total reduction in 2030 emissions of 4.8 billion mtCO2e versus prior pledges, the UN said.

Former U.S. Department of Energy Secretary Ernest Moniz on Nov. 8 laid out his top three clean energy investment priorities during an episode of Market Intelligence Live. Moniz delivered his remarks as climate negotiators are meeting is Glasgow, Scotland, and countries like the U.S. are urging other top global greenhouse gas emitters to set climate targets in line with a 1.5-degree C warming scenario by the end of the century.

Acknowledging that U.S. action to mitigate climate change has been constrained by the lack of a robust political majority favoring increased ambitions, former U.S. President Barack Obama Nov. 8 emphasized at the UN Climate Conference the importance of broadening the base of political support for further steps.

Global leaders are targeting accelerated decarbonization of cities and industry, along with advancing carbon capture and storage technology, as the Mission Innovation group extends its goals on clean energy investment by 2030.

Listen: Hydrogen And The Path Towards Decarbonization

Hydrogen has received extraordinary policy support over the past year, with nations worldwide racing to publish national hydrogen strategies. These roadmaps provide a decade-long pathway to developing wide-scale utilization of low-carbon hydrogen as a means to achieving deep decarbonization in otherwise problematic sectors. 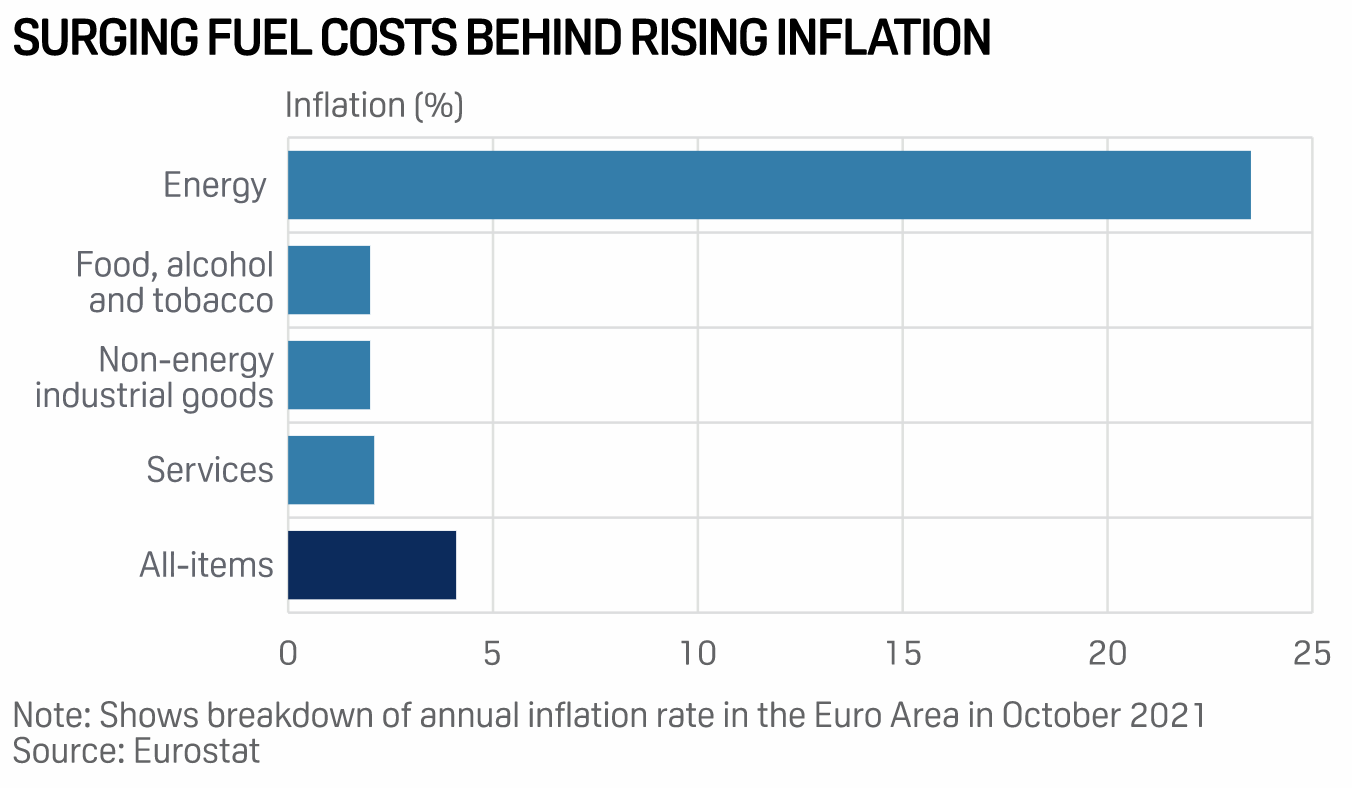 OPEC has ignored the pleas of U.S. President Joe Biden to pump more oil, but the cartel may find the actions of under-fire central bankers harder to disregard. The custodians of the world's monetary system and watchkeepers of inflation are deflecting blame for the rising cost of living onto energy producers.

Spare production capacity has shrunk significantly due to underinvestment, the head of Saudi Aramco said Nov. 9, warning that the potential rebound in jet travel and continued power plant demand for liquid fuels could create a worryingly tight market in 2022.

President Joe Biden is poised to sign into law a historic $1.2 trillion bipartisan infrastructure bill that could help modernize the electric grid and unlock billions of dollars for cutting-edge energy technologies, following passage by the U.S. House of Representatives late Nov. 5.