Vaccinations are being deployed across the United States. The American labor market is seeing a windfall of new employment, and consumer confidence is picking up. Companies’ probability of defaulting is declining. Such indicators point to a place of strength and stability for the U.S. recovery.

“Matching exactly our forecast since March and confirming the build-up of momentum we had been tracking,” the first-quarter GDP growth “was strong in virtually every aspect, led by a 10.7% annualized surge in consumption—a reflection of improved vaccination rollouts, wider reopening and unprecedented government income support—with food and beverage purchased for off-premises consumption leading nondurable goods consumption growth and food service and accommodations leading service consumption growth,” Dr. Bovino said in a recent report.

Corporates across the country are capitalizing on the combination of fiscal and monetary policy in support of the rebound. S&P Global Market Intelligence found that U.S. companies’ bankruptcies slowed in April, and the potential for U.S. defaults remains low with median one-year probability of default scores declining across most sectors month-over-month. Defaults are trending lower. In the first quarter, the number of U.S. corporate upgrades rose 52%, to 99—the highest number since the third quarter of 2013 and the first time that upgrades outnumbered downgrades (which fell 25% to 66) since 2014, according to S&P Global Ratings.

U.S. President Joe Biden’s actions in his first 100 days in office have focused on pulling the country from the depths of the coronavirus crisis and reshaping broad swaths of the world’s biggest economy. Likewise, the Federal Reserve’s accommodative policy stance has driven its monthly purchases of $80 billion worth of Treasury securities and $40 billion worth of mortgage-backed securities during the pandemic. Moving forward, however, many industries may watch the administration closely as it aims to increase oversight and change tax laws in ways that could diminish corporate earnings and capital gains. The U.S. central bank, after having been transformed during the crisis by aligning its goals more closely to those of the federal government now than in recent years, may be complicated as it redefines its role in supporting the economy without undermining market stability. Market participants are now expressing and acting on concerns over the risk of inflation.

“We are in the camp that believes the pickup in headline inflation is tied primarily to resurgent economic activity after the pandemic-induced economic standstill and corresponding depressed prices last year. Against this backdrop, we expect the upward trend of corporate borrowers' cost pressures to moderate in the next year or two, as the economic recovery starts to level off and business activities normalize,” Dr. Bovino said in her report. “Moreover, we think industries will largely be able to manage rising prices through cost-saving strategies, productivity gains, or by passing them through to customers.”

While the U.S. economy’s recovery is a sign of a post-pandemic world to come, the road to normalization won’t be without obstacles. Globally, the U.S.’s outperforming recovery and unwinding of pent-up savings could result in faster growth and rising imports, which may widen the country’s current account deficit, according to S&P Global Ratings. This could sow disorder in the global economic recovery. Domestically, a storm of defaults could strike when the crisis is controlled.

"There's going to be a day of reckoning," Tim Weed, a partner at the professional services firm Plante Moran, told S&P Global Market Intelligence. "There's going to be some cleaning out of different parts of corporate America … We can paper over for a while, but eventually those things will come home to roost.”

Today is Tuesday, May 4, 2021 and here is today’s essential intelligence. 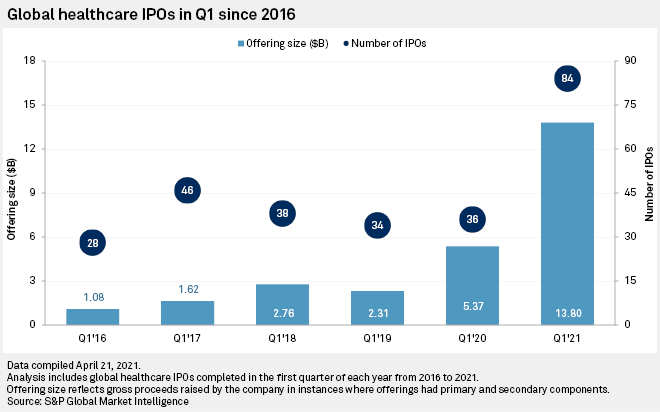 Global healthcare IPOs during the first quarter of 2021 more than doubled year over year as the pandemic highlighted the need for innovative therapies, vaccines and diagnostics. According to data compiled by S&P Global Market Intelligence, 84 healthcare companies went public globally, the highest number of first-quarter IPOs over the last five years. The total valuation of these offerings was $13.80 billion, more than double the $5.37 billion of offerings in the first quarter of 2020.

The percentage of active funds that underperformed their respective benchmarks in the Indian Equities Large-Cap and Mid-/Small-Cap fund categories over a one-year investment horizon doubled from 2019 to 2020, as seen in the SPIVA® India Year-End Scorecards for 2019 and 2020. 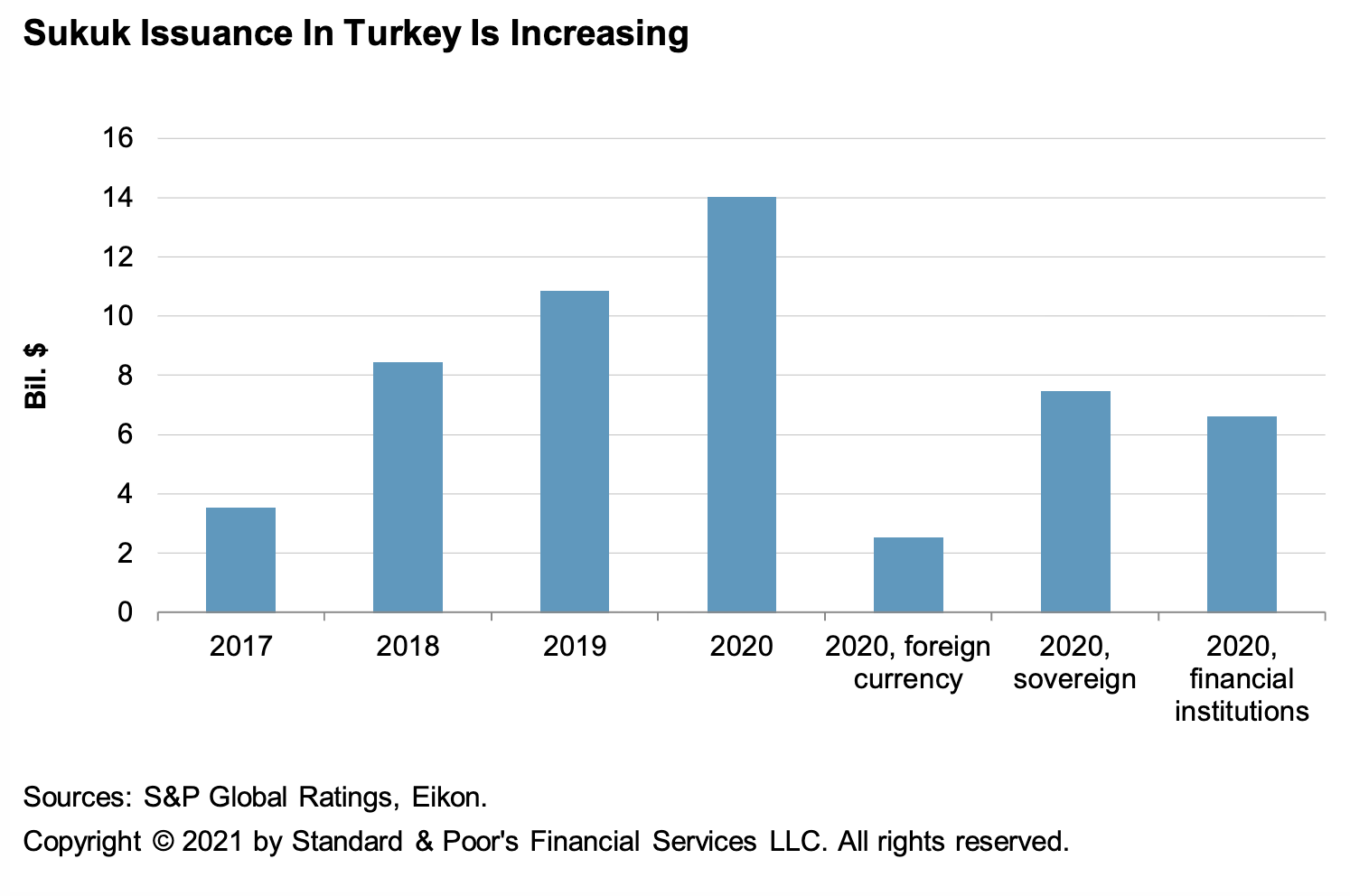 The Participation Banks Association of Turkey, in its newly updated strategy, expects a doubling of participation banks' market share to 15% by 2025. We see this objective as challenging given the difficult economic and credit conditions and the capital support that such growth implies.

S&P Global Ratings expects stronger sukuk issuances and expanding market shares amid the modest recovery of core Islamic finance economies to boost Islamic finance assets by around 10%-12% over 2021-2022. Although the pandemic offered the possibility of more broad-based and transformative growth, the industry has not yet fully unlocked the opportunities inclusive standardization affords and increased its share of sustainable finance activity.

On April 23, 2021, the February 2021 Regulated Utility Consumer Protection Act (SB 1050) was signed into law in Oklahoma, allowing utilities operating within the state to file with the Oklahoma Corp. Commission (OCC) for securitization of the incremental costs associated with the 2021 winter weather event.

M&A and fundraising activity in the fintech sector has started at a torrid pace in 2021 and shows no signs of slowing. That was the message that Greg Smith, managing director and director of research at fintech-focused investment bank FT Partners, delivered in the latest Street Talk podcast.

Some of Japan's regional banks may be forced to consolidate to survive, a consideration many have long been resistant to, as more banks are no longer earning sufficient income to cover operating expenses. 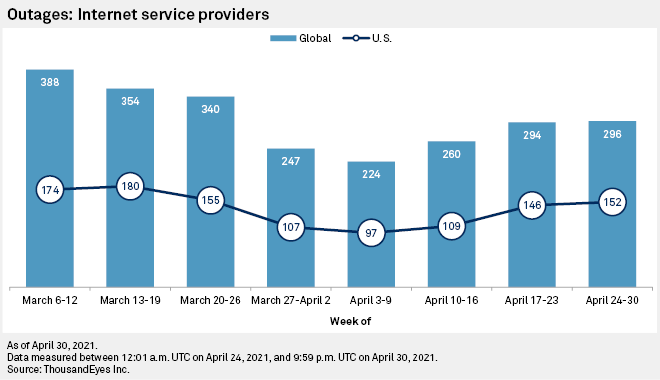 The week of April 24 marked the third consecutive weekly increase in the volume of global internet outages since a low point in early April, according to data from ThousandEyes, a network-monitoring service owned by Cisco Systems Inc.

New Debate On Whether Big Tech Buy-Ups Are 'Killer Acquisitions'

Big Tech companies have become, well, big — largely due to a slew of acquisitions over the years. Think of Facebook Inc.'s 2012 purchase of Instagram LLC; Amazon.com Inc.'s acquisition of Whole Foods Market Inc. in 2017; and Google LLC's buy of Fitbit Inc. in early 2021.

The global chip shortage that has disrupted automakers' operations in China since late 2020 will get worse before it gets better. Fast auto demand recovery since the second half of 2020 and increasing demand from consumer electronics largely explain the tight chip supply globally. S&P Global Ratings believes the shortage may slow but not derail the recovery of the Chinese auto sector. 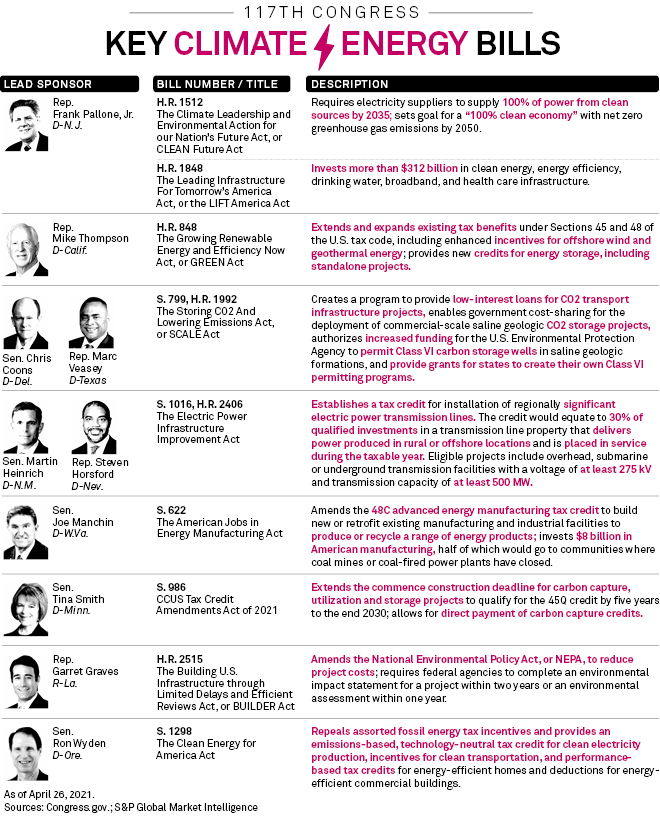 U.S. President Joe Biden's first 100 days in office brought a flurry of executive actions involving climate change and energy policy. But many pieces of Biden's climate agenda, including key parts of his 10-year, $2 trillion infrastructure-focused American Jobs Plan, will require approval from Congress, where partisan divides and parliamentary procedures could determine the fate of those proposals.

ExxonMobil and Chevron confirmed their commitments to building large-scale projects to address climate change April 30, beginning with a focus on carbon capture. The companies remain among the world's largest producers of oil and gas, but the coming energy transition has loomed large and stirred excitement in the last year or so, which was reflected in separate Q1 earnings calls. 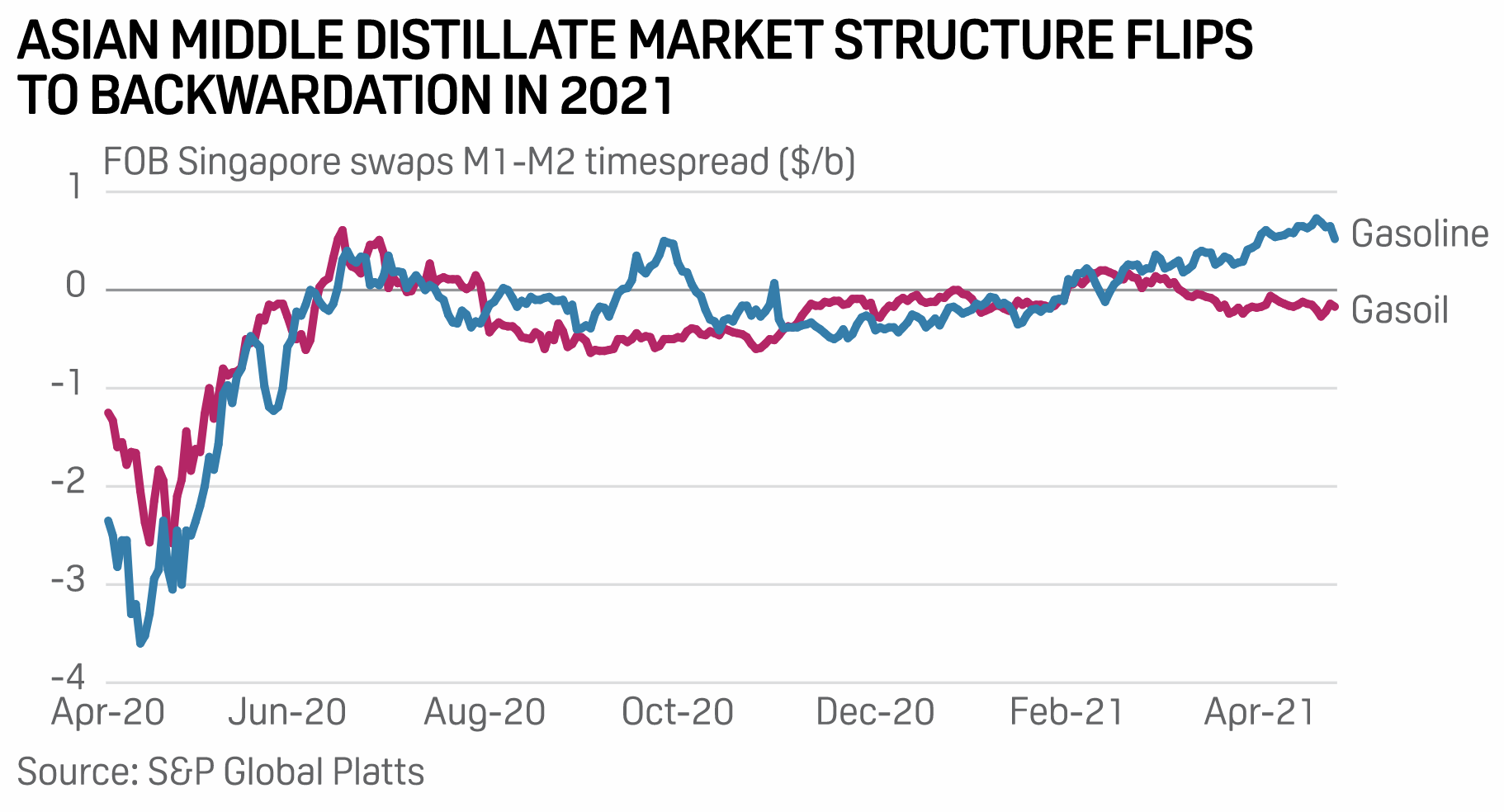 Vietnam is considering lowering mandatory oil inventory levels at major oil companies to 20 days worth of domestic demand from the current 30 days, a move that could help local fuel distributors and exporters maximize their profits from the backwardation in the Asian market structure and flexibly manage their stockpiles amid fragile consumer demand recovery.

Iran expects to export as much as 2.5 million b/d of crude after the removal of US sanctions as the third round of talks between Tehran and some signatories to the nuclear agreement concluded in Vienna amid hopes of Washington removing oil sanctions on Tehran.